Banking and financial services group UBS believes that good contemporary art reflects and influences trends in society. Sharing a passion for contemporary art with many of its clients, and through its support of innovative programmes, UBS enables clients and art enthusiasts to participate in the dynamic world of contemporary art. Wallpaper* recently partnered with UBS on the magazine’s Smart Art section, which published features on contemporary artists and art collectors collaborating with architects to create unique and inspiring spaces, as well as the museums causing a cultural revolution in the Lebanese capital

Designed in 1924 by Lebanese architect Youssef Aftimos, the Barakat Building was devastated by civil war but is now being rebuilt as cultural centre Beit Beirut

With its back literally up against massacres, the systematic destruction of communities and cultural suicide, Beirut has decided to shake off a decade of inertia and is in the process of opening not one, but three new museums.
By the end of the year, the small but beautifully curated 1942 Egyptian Revival-style National Museum will be joined by Beit Beirut, a public museum of urban history; the Sursock, a semi-public museum of modern and contemporary art; and the Aïshti Foundation.

Once a regional powerhouse, the Sursock’s role declined with the outbreak of civil war in 1975. Housed in the early-19th century Ottoman-influenced Italianate palace of Nicolas Sursock, son of one of the Levant’s largest land-owning families, it did reopen after the war but a lack of funding prevented it from recapturing its élan. Closed for the last eight years to undergo a $14m refurbishment, the museum reopens in October and has been extended to almost five times its original size. The 8,500 sq m space now houses a vaulting light-filled gallery for temporary exhibitions, an auditorium, library and storage area. The permanent collection, consisting of mostly contemporary Lebanese artworks amassed since the 1960s, will be displayed in the palace, which still retains traces of the past in the form of Nicolas Sursock’s office and an indoor diwan. The redesign was undertaken by French architect Jean-Michel Wilmotte in tandem with Jacques Aboukhaled and has transformed a once-cramped museum into a state-of-the-art stop for international exhibitions, and a potential regional hub for modern and contemporary art.

The Aïshti Foundation opens two weeks after the Sursock. Straddling the commercial/cultural divide, the massive $100m hybrid space designed by David Adjaye, will reflect the passions of its owners, who run Beirut’s equivalent of Selfridges, so alongside the gallery, there will be shops, a spa, a gym and a nightclub, as well as a 19,300 sq m seafront promenade, dotted with restaurants and cafés. Last to open will be Beit Beirut. It’s being inserted into one of Beirut’s most architecturally significant early-20th century constructions, the Barakat building. Located on a frenetic crossroads that for years was an infamous checkpoint, the Barakat’s bullet-chewed yet elegant facade and intact snipers’ nests attest to its tumultuous history. Unlike many of its peers, it survived Beirut’s post-war cull of architectural heritage thanks to the efforts of Mona Hallak, an architect who has devoted the better part of the last two decades to painstakingly researching the history of its inhabitants, some of whom left in such a hurry, their lives were preserved almost intact. The trove of documents, negatives, old newspapers and personal correspondence that Hallak uncovered form the bulk of the museum’s collection, which will tell the story of the city, from the late-19th century onwards, through the lives of the Barakat’s and Beirut’s inhabitants.

The UBS Planet Art app is an iPad app that simplifies your access to contemporary art news. To find out more and to see a tutorial video, visit www.ubs.com/planetart 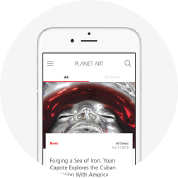 To download the app, go to the iTunes Store