Launched in 2000 in Milan, Armani/Casa forged a new union between luxury fashion and furniture.

But it wasn’t Giorgio Armani’s first foray into interior design. Some two decades earlier in 1982, the forward-thinking fashion designer had extended his tailored aesthetic to the ‘Logo Lamp’, a sophisticated table light that still t0day remains at the core of Armani/Casa’s design DNA.

Soon, Armani/Casa will relocate its Via Sant’Andrea showroom to the former site of De Padova’s historic headquarters on Corso Venezia. Spanning 1,300 sq m, four storeys and 16 vast windows, the brand new space will form a new permanent home for Armani/Casa, having earlier this year hosted a temporary exhibition during the Salone del Mobile. For now, the view from outside is hidden by lightweight canvases that line the windows, filtering sunlight and offering a feeling of relaxed seclusion from the bustle of the streets, creating a sense of eager anticipation as Milan awaits the unwrapping of the final space.

The ‘Luna’ swivel table centres on a swivel system in satin-finished brass, bolstered by a walnut frame and a technical pearl- and gold-coloured fabric base finished with a glossy Himalayan lacquer. The ‘Oreste’ small table, balanced on crossed legs, is available in a number of options, including brushed brown oak, and precious finishes such as black straw marquetry or a grey, lizard skin-like leather – a perfect pairing for the brand’s ‘Fair’ chessboard. With a light and minimal design, the ‘Larry’ table is unique for its C-shaped legs that support the upper shelf, while the drawer is held in place almost invisible system, creating a suspended effect. It is available in forest green lacquer with satin light brass details, or in Canaletto walnut with satin light brass details.

The oval table ‘Lewis’ features contrasting tops and frames in silver liquid metal lacquer with legs in black satin nickel. The handcrafted ‘Club’ bar cabinet, in black straw marquetry and natural brass, is limited to an edition of 50 signed and numbered pieces – its doors are adorned an ocean lacquer finish that recalls Hokusai’s iconic The Great Wave off Kanagawa, while the interior is finished in technical pearl-gold fabric and bronze lacquer. The ‘Freud’ bookcase in black straw marquetry and natural brass is also available in black walnut and light-satin brass.

Limoges porcelain, chosen for its fabric-like qualities, forms the basis of the ‘Louis’ dinner set, which is decorated with rich touches of gold and platinum and complemented by the ‘Lotus’ collection– a perfectly formed tableware set for the fineries of a formal dinner, where even the humble coaster takes on the sensual grace of a lotus flower.

The latest Armani/Casa exclusive textile collection by Venetian company Rubelli shines a spotlight on the textures associated with the exquisite embroideries that characterise the Armani style. Evocative Japanese landscapes – plucked from Rubelli’s archive – are the collection’s hallmark, punctuated by notes of ruby red, jade green and sapphire blue with more subdued smoky gold and smoky grey.

From this hand-painted velvet cloth, dating, back to the early twentieth century a compelling family of fabrics is born, including ‘Lafayette’, in silk jacquard, textured with chenille; ‘Lisbon’, with its crackle finish; ‘Lyon’ emulates the softness of embroidered clothing; and ‘Larissa’, printed on cotton grosgrain. Taking an exotic turn, the 100 per cent cashmere ‘Lux’ blanket features jacquard patterns of leopards, while ‘Lumen’ is adorned with polar bears. 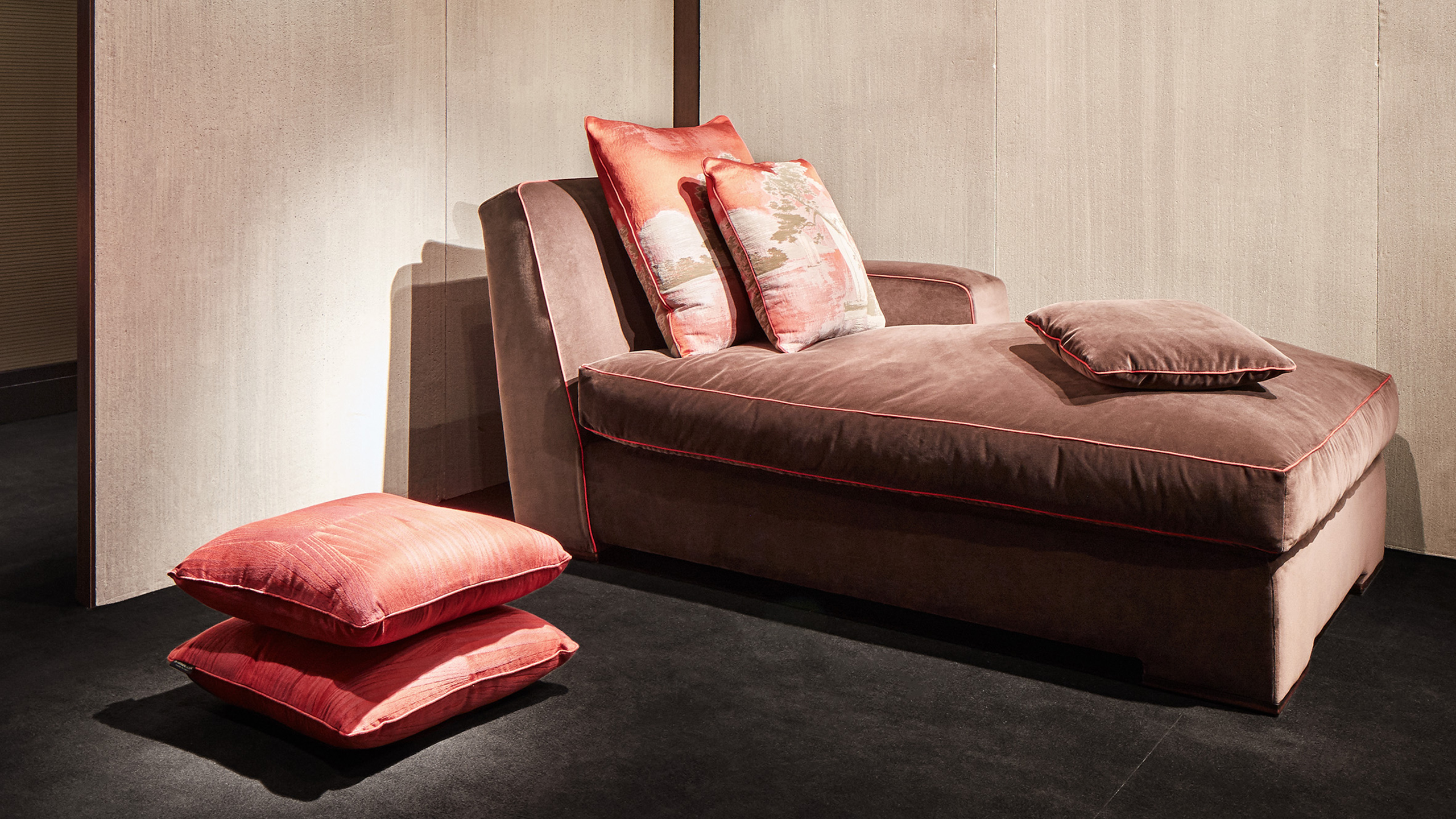