Welcome to the Design Awards issue, our annual round-up of the best designs and brightest talents that have dazzled us in the past year. As seasoned readers will know, the issue can be roughly divided into two striking halves. The first is an honour roll of the people, places and particular things that have caught the eye of Team Wallpaper* – drawn together after a year’s worth of globetrotting, researching and bickering.

The second half is our Judges’ Awards, consisting of 11 key categories. Wallpaper* compiles the shortlist, which is then voted on by a panel of judges, who stand at the apex of the creative disciplines we cover. A big thank-you goes to architect-of-the-moment Amanda Levete, beauty entrepreneur and renaissance man Ramdane Touhami, actor-turned-film director Laetitia Casta, our 2016 Designers of the Year Ronan & Erwan Bouroullec, and artist and Space Program initiator Tom Sachs for your time, effort and impeccable judgment.

All of our Judges’ Awards are equally prestigious, but the one that gets me most excited is Best City, because it offers such a broad scope for celebration. We toasted last year’s winner, Copenhagen (and by extension, Denmark), at numerous events over the last year – including our Design Awards dinner, catered by Danish chef Bo Lindegaard, and cocktails at New York’s 11 Howard hotel, designed by Space Copenhagen. More recently, we orchestrated the Wallpaper* Hygge Christmas Market at London’s King’s Cross, with the support of Copenhagen-based architects 3xn and the Royal Danish Embassy, and then gathered our Danish friends for a triumphant bash at the new London outpost of Nordic restaurant Aquavit. 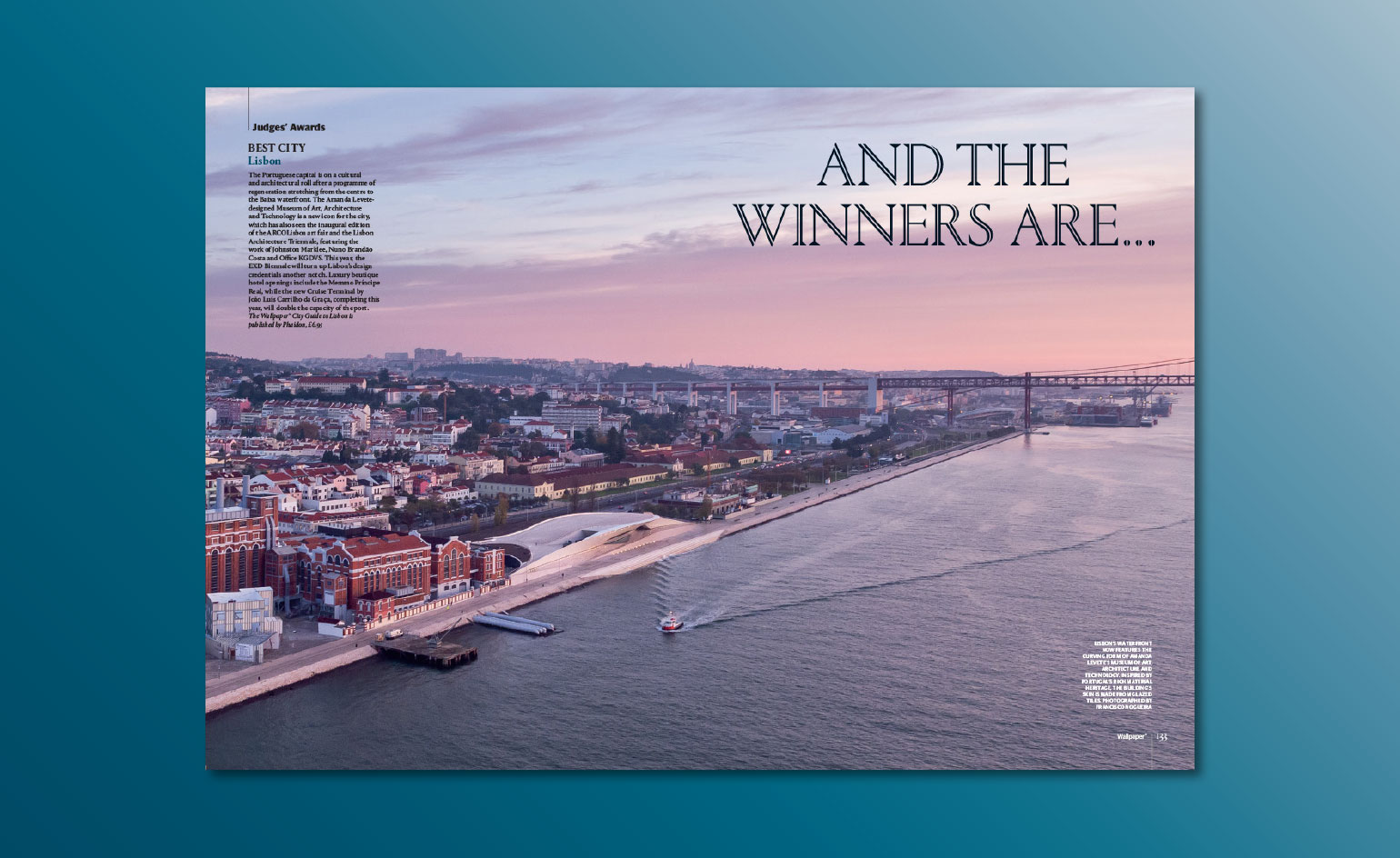 See the winners of our much-coveted Judges’ Awards

Now, for 2017, we hand over the Best City baton to Lisbon (above). While its triumph was down to our judges’ votes, I must admit I’d been rooting for the Portuguese capital to win. What swung it for me was a trip in early October for the unveiling of the new Museum of Art, Architecture and Technology (MAAT), by Amanda Levete and her studio, AL_A. On top of a busy schedule of festivities for the opening,

I was introduced to the Portuguese capital by a few locals, among them energy titan António Mexia (who commissioned MAAT), his wife, curator Guta Moura Guedes, and hotelier Rodrigo Machaz. With growing cultural clout, successive hotel openings and a regeneration programme that is rapidly yielding fruit, Lisbon is Europe’s hippest city right now.

Look out for a new award category – the Next Generation Designer award, celebrating a young individual who has significantly contributed to design and architecture in the past year, and looks set to create  a lasting impact. Special thanks go to the category sponsor, watch manufacturer Officine Panerai. Its design acumen, aesthetic heritage and skilled combination of technology and craftsmanship make  it the perfect partner.

Finally, don’t forget our back page – in lieu of our usual ‘naughty list’ of the year’s worst designs, we present our gilded vision of the Oval Office redesign, due 20 January, when orange becomes the new black.

Jan Kath’s ’Magic View’ rugs ask us to raise our heads and take in a patch of the sky framed by towering rainforest. Photography: Thomas Brown

Touch down and explore a brave new world of form and high function. Photography: Thomas Brown

The Best Ombre award pays tribute to designers experimenting with prismatic colours, while Best Stretch sees Loewe get into the string of things with an elastic band dress. Photography: Thomas Brown, Leigh Johnson

Get into the spirit with a contemporary cocktail lounge. Photography: Matthew Donaldson

Design Award judges Ronan and Erwan Bouroullec with the ’Ak70’. The device has an oblique angle on one side to allow the user’s thumb easier access to the touchscreen. A circular dial controls the volume. Photography: Alexandre Guirkinger

Our favourite spring/summer 2017 collections took us on a trip back in time, enhanced by pops of colour and sharp silhouettes. Photography: Sofie Middernacht and Maarten Alexander

The February 2017 issue of Wallpaper* is out now. Subscribe here