On the lake: this meandering Canadian house is all about the views

Montreal based Paul Bernier Architecte has responded to the natural topography of the wooded Lac Grenier site with a meandering cedar ‘palisade’, with openings to capture light and views. The site seems low key but upon entering, the dramatic views for the interior are revealed

An hour’s drive from Montreal, a woodland plot overlooking Lac Grenier provides an idyllic setting for a site-sensitive home. Bound by a steep incline to the north and a stream to the south, Montreal based Paul Bernier Architecte positioned this new house lengthwise between the two, carefully preserving the natural features of the site.

‘We chose to create a low-profile, primarily single-storey building. Its meandering shape is determined by the opportunities offered by the surrounding landscape. The structure bends, opens, and narrows like a river carving its own path,’ says Bernier.

Clad in vertical cedar slats of varying widths and thicknesses, the zigzagging volume has a minimalist appearance due to the installation’s concealed flashings and trims. ‘The surface reads instead like a palisade that follows the shape of the building and into which openings have been cut,’ explains Bernier. On approach to the house, the garage’s opaque treatment creates a notion of fortification, while a metal door signals the point of entry. 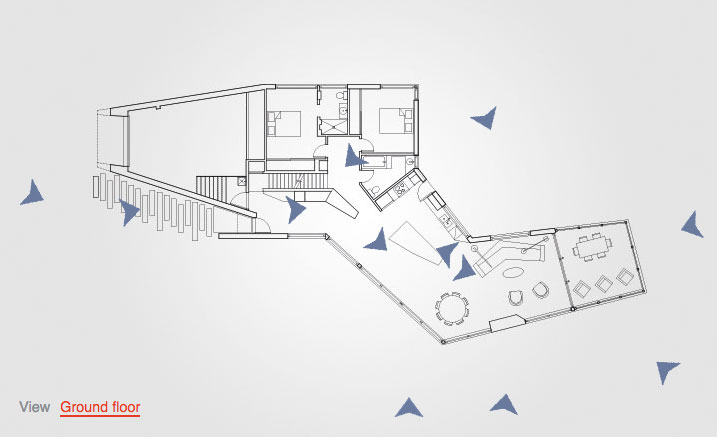 Take an interactive tour of House on Lac Grenier

The big reveal is reserved for the bright interior, where large glazed screens are orientated to exploit the spectacular views; the forest to the south and the lake to the east, with smaller picture frame windows offering sights and sounds of the stream to the north.

An internal pathway, suggested by the placement of three wooden masses along an axis, subtly divides the sequence of open plan kitchen, living and dining spaces, culminating in a cantilevered screened room. Fashioned from hickory, the abstract volumes, including an entrance cloakroom, a kitchen island and multimedia cabinet, contrast the refined palette of white walls and polished concrete floors with measured restraint, allowing the setting to take centre stage.

The cloakroom unit screens the private areas of the house; the en-suite master bedroom, a second bedroom and bathroom.  A hickory staircase leads to a tree-house style reading room, modestly positioned amidst the living roof.

With time, the cedar will dull and planting will grow, rooting the house to the woodland as nature (and the clients) intended.

The open plan living space with its refined palette of white walls, polished concrete floors and hickory multi-media cabinet, allow the dramatic views of the landscape to take precedence

The open plan living space culminates in a glazed room with panoramic views of the stream flowing into the lake. The seasonal change of the surrounding trees provide summer shade and flood the space with warmth and light in winter

A trio of sculptural hickory volumes, including the entrance cloakroom, kitchen island and multi-media cabinet, are positioned along an axis to subtly divide the open plan living spaces

With time, the cedar will dull to silver and the ground cover will grow around the house, merging architecture with nature and rooting the house to its setting

The minimalist appearance of the multi-faceted palisade is afforded by an open-work installation, in which the vertical cedar slats are offset from the weatherproofing layer, permitting a zone for concealed flashings and trims

The openings in the palisade playfully increase moving away from the entrance, as the house’s orientation changes to maximise the view of the site’s natural features

The big reveal is reserved for the bright open-plan living spaces, with dramatic views to the forest on the south and the lake to the east

The house is primarily a single-storey building with the exception of a modest rooftop reading room, set back on the green roof.  As the roof planting becomes established, the reading room will become like a tree-house with elevated views out over the vegetation to the lake

The palisade splays to allow for the entrance. Beyond it, a sculptural cloakroom is moulded to form seating and integrated storage

The minimalist approach of cedar cladding and glazing to the exterior is echoed internally with a simplified palette of white walls, polished concrete and hickory