The Bartlett is located at 22 Gordon Street, at the former Wates House. The new brick facade is extensively glazed with full-height, timber-framed windows in deep recesses. Photography: Jack Hobhouse

The UCL Bartlett School of Architecture in Bloomsbury, London, has been redesigned and extended by 3,000 sq m by Hawkins\Brown. The deep retrofit of the former building, Wates House – built in 1974 and located on a restricted site part of the Bloomsbury Conservation zone – will provide a new modern and adaptable space to allow the leading architectural school to innovate its programme and fulfil its public facing role.

After operating at a spatial minimum for 15 years, increased space and adaptability were at the top of Bartlett School of Architecture director Bob Sheil’s list. He explains that while the Bartlett could have been seen as a ‘nightmare client’, they were just eager for functionality, rather than an architectural statement: ‘The Bartlett is about the people and the work they produce – we don’t need to be distracted.’

‘They ticked all the boxes,’ he adds of Hawkins\Brown, whose building reflects the broadening role of the Bartlett. ‘You can’t forecast the future of architectural education.’ With the growing popularity of the Bartlett’s non-accredited courses, he sees an architecture based on ‘titles’ as an unsustainable educational model. ‘Architecture is one of the most broad, diverse and liberal domains – it’s not only about educating architects,’ he says. 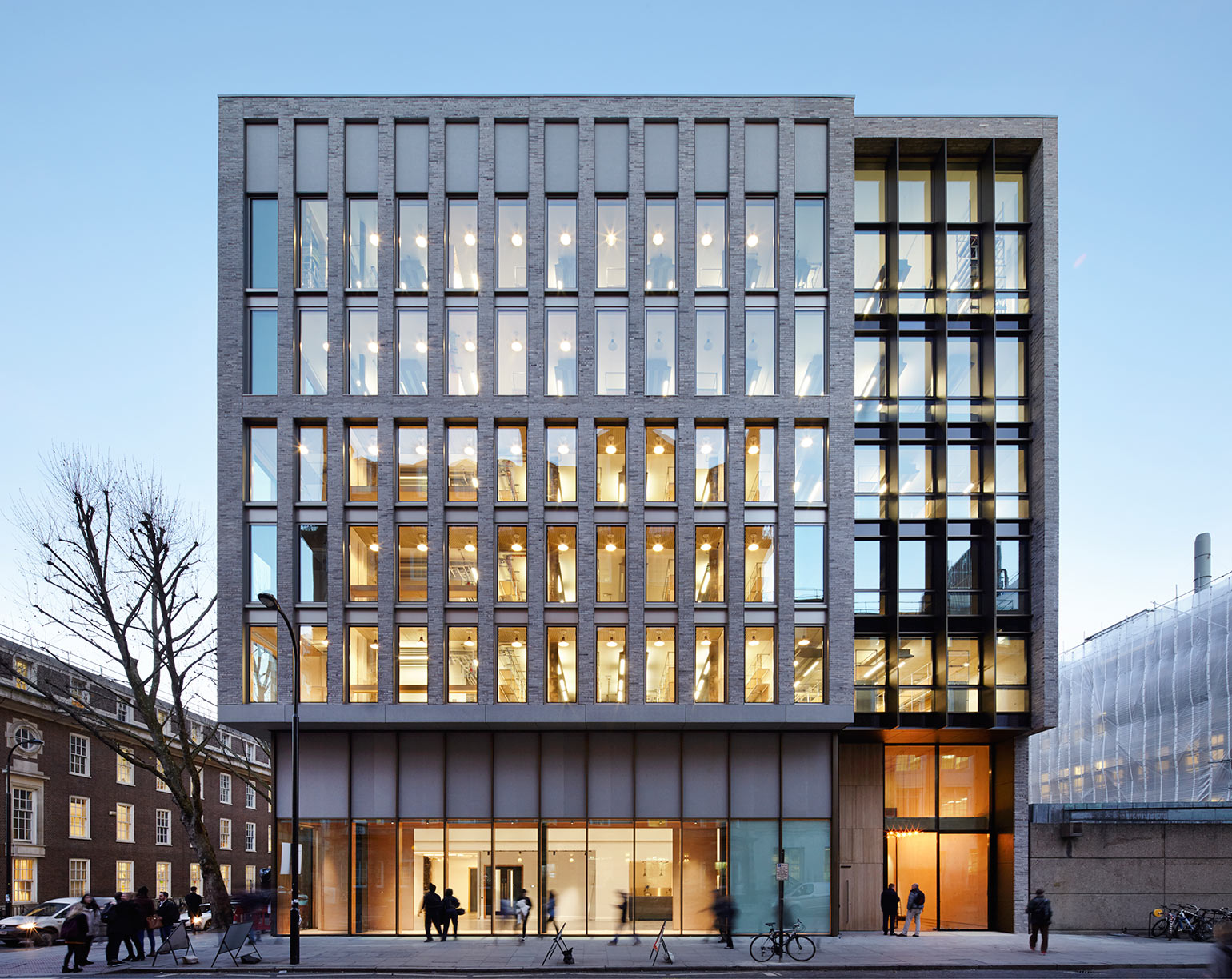 Exterior of the new Bartlett School of Architecture

Increased studio and informal spaces where doors have been removed reflect broad functions and encourage social activity and exchange. Euan Macdonald, a partner at Hawkins\Brown, sees the design as a ‘vessel for the academic activity of the school’ which is ‘lean and hard-working’, offering a network of spaces to suit different activities.

The architects brought the facade up to the property boundary, adding 1.5m to the floor-plate to fill the site footprint above ground and creating a new entrance with double-height glazing to connect the school to the street and open it up to the public. A fifth and sixth floor were added to increase space, as well as a full height extension to the south.

The architects met challenges along the way, overcoming them through diplomacy, design and engineering. ‘Initially we worked hard to demonstrate that the anticipated scope of our original brief, a £5m refurbishment and window replacement, was not going to provide a sustainable, holistic or long-term solution to the Bartlett’s fundamental problem – a chronic shortage of space,’ says Macdonald. 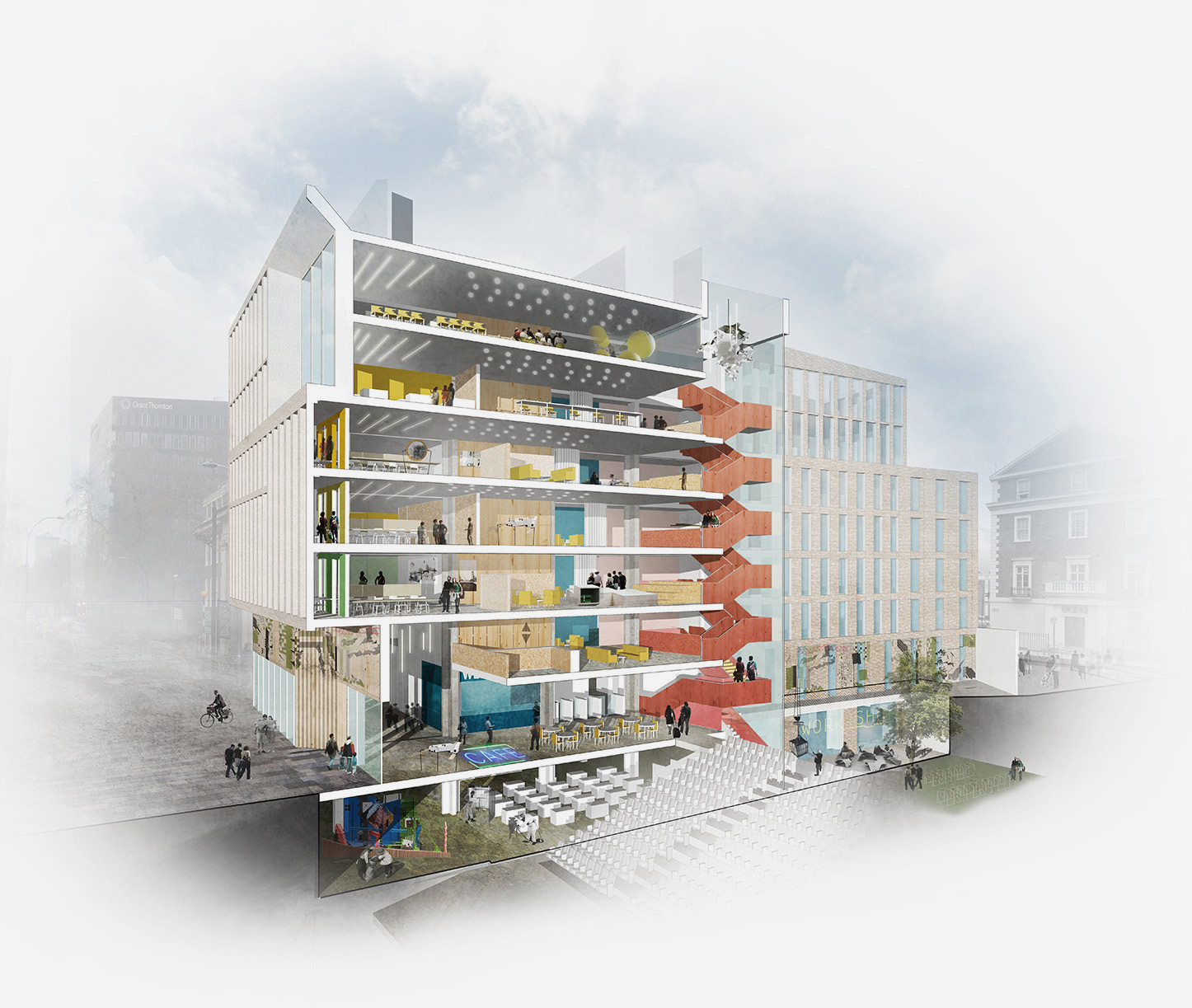 Working with the existing structure also threw up obstacles: ‘A final key challenge was how to design a heavy, masonry building with significant additional mass and area, when both the sub- and superstructure of the original building were close to their design capacity. Through close collaboration with the structural engineer we developed a lightweight structural solution for all new spaces, and selected a slim depth (70mm) brick that fulfilled all these constraining criteria,’ says Macdonald.

Retaining the original structure was symbolic, as well as environmentally sound: ‘We also wanted to reveal the story of the old building’s transformation and modification,’ says Macdonald. The concrete has been left in its raw state and complemented with typically industrial finishes within.

Commissioned by the UCL Bartlett and UCL Estates, the building is the first for the ‘Transforming UCL’ scheme, the largest capital programme in the university’s history

‘All spaces are designed to be robust, hard-working and durable to provide the backdrop to the activities and output of the school,’ says Euan Macdonald, partner at Hawkins\Brown

The architects worked to design an architecture that ‘responded positively to the diverse characters of the surrounding conservation areas’, says Macdonald

The original building, Wates House, was designed to accomodate 380 students and 90 staff, whereas the new 8,500 sq m building will accommodate 1,000

Bob Sheil, director of the Bartlett School of Architecture, wanted a more convivial space that would activate collaboration between students

With a full-height atrium, the staircase is a central feature of the new building

For Macdonald, the most subtle, yet poignant, detail of the whole design was the handrail of the existing staircases and the new handrail of the extended stairs: ‘This small detail sums up our respect for the school and its former home and how we have built upon it, yet transformed it to provide new space for future generations of architects and designers’

Despite the constrained site and structural challenges, Hawkins\Brown’s design met the brief and needs of the university and school, while achieving an aesthetic balance of materials and maintaining symbolic historical elements of the building

Integrated joinery, pivoting screens and sliding shutters are built into the working spaces