The restored Villa Volman, originally built for an industrialist in 1939 and shaped by a desire for artistry as well as functionalism. Photography: Aleš Jungmann

Since the early 1990s, visitors to the sleepy town of  Čelákovice, just a few kilometres from Prague, could have easily missed the concrete ruin of Villa Volman. Situated in a large natural park, the house had become more of a neglected, weather-battered, graffiti-covered squat than the luxury mansion of its heyday. But the building – one of the Czech modernist movement’s forgotten icons – has been returned to its pre-war glory after years of careful restoration work.

Saved by enlightened local business group CZ Tech, the home of industrialist Josef Volman was originally built in 1939, designed by avant-garde Czech architects Karel Janů and Jiří Štursa. Prague-based Studio TaK won the competition for the renovation. ‘We had a huge appetite to be involved in a project of such significance,’ says chief architect Marek Tichý. His team’s detailed prep work, surveys, design and construction lasted almost 15 years. ‘The design of the villa is extraordinary. It is a unique example of its kind in what was then Czechoslovakia,’ adds Tichý. ‘Its architecture shows the synthesis of various streams of European modernism of the early 20th century, and also the importance and strength of the first Czech Republic, which, in the period between the world wars, was one of the most developed countries in the world.’

The villa is also emblematic of the divide created by a debate in Czechoslovak modernist architecture. The country’s avant-garde Devětsil group, headed by influential theorist, artist and visionary Karel Teige, advocated architecture as science, a tool to build a modern society. The opposition argued for architecture’s more artistic qualities, treating it as a means to experiment with shapes and fine art influences.

Villa Volman shows the clash between these two ideologies. Although Janů and Štursa were inclined to embrace architecture’s social call, this commission was primarily an artistic and compositional challenge. Volman, who had previously built a factory and housing for his employees in Čelákovice, bought a large piece of land and gave the architects an almost unlimited budget. The result was one of the finest (and most expensive) residences in the country’s interwar period, along with Mies van der Rohe’s Villa Tugendhat in Brno and Adolf Loos’ Müller house in Prague. 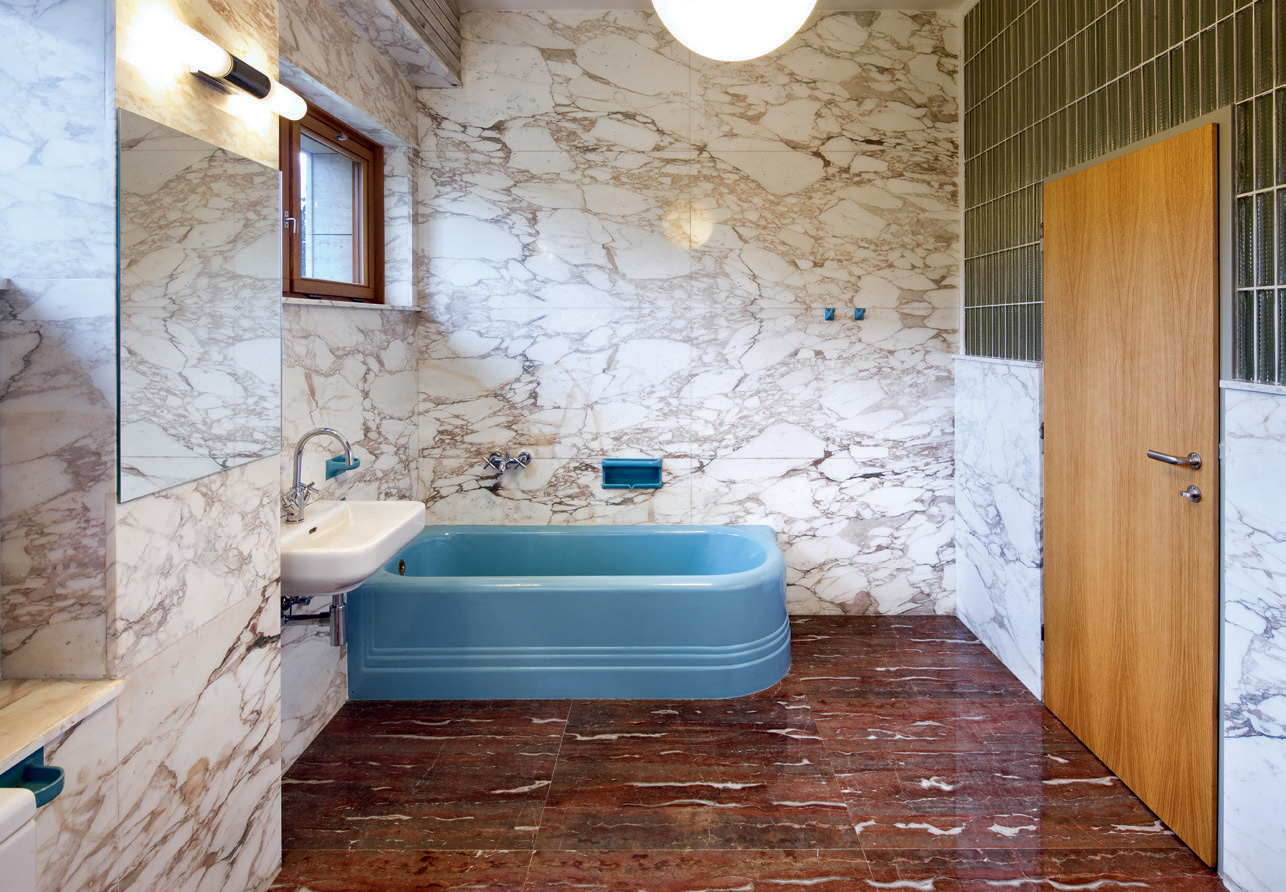 One of the marble-lined bathrooms, which each feature a differently coloured tub

The architects conceived Villa Volman as a sculptural object. ‘It’s not just its functionalist architecture, but also the composition of the house and the context of the Elbe River and the beautiful floodplain forests nearby that need to be considered to understand the full breadth of this project,’ says Tichý. The building is a dynamic composition of intertwined volumes. Sharp lines alternate with curved walls and organic details; sleek, smooth surfaces contrast with traditional stone masonry. Bridges, walkways, balconies and staircases dominate the exterior and create a nautical character – a popular theme in the modernist architecture of the time.

The interior is a rich mosaic. Aside from the built-in furniture and fixtures, designed by Janů and Štursa, the space was finished with contemporary pieces – some bought, some tailor-made by Volman’s daughter Ludmila, who looked after the interior decoration. ‘The villa was designed as a modern house, equipped, among other things, with central heating, high-tech mechanical infrastructure and, of course, luxurious materials, such as several types of marble, chrome details, stainless steel and exotic wood,’ says Tichý.

Unfortunately, the Volman family was not able to enjoy its home for long. ‘The fate of the villa is a reflection of the sad story of the devastation of Czech society after 1948, when the Communists came to power,’ explains Tichý. Volman lived in the villa only briefly, until his death in 1943. His daughter and her husband, Jiří Růžek, lived there throughout the Second World War, but after 1945 the Communist regime began harassing the family and they had to emigrate. The Volman factories and villa were confiscated and the house used as a kindergarten. After 1989, the villa was returned to Růžek, who offered it to the Czech state and the city of Čelákovice as a valuable cultural monument, yet even so it remained abandoned.

CZ Tech bought it in 1998. The new owners soon called upon Tichý and his colleagues Magdalena Kurfürstová and Jan Tomeš, who started to examine the site, working with historical research and the original drawings and documentation. The most difficult part was putting all the pieces of the puzzle together, working out how the villa was built and how it looked at the time of its inception, as the damage from years of neglect was considerable. ‘It was real detective work, and involved experts from various professions,’ says Tichý.

Unlike similar renovations, where architects may add a new, contemporary layer to a building’s historical fabric, Villa Volman was restored as faithfully as possible. New elements were selected to fill in gaps, but in a way that does not compete with the original architecture. ‘It was one of the most exciting projects I’ve ever worked on,’ says Tichý. ‘Our goal now is to present all the documents we discovered and the procedures we used in a book about the history, present and reconstruction of Villa Volman. At the same time, the owners are thinking about its potential future use, possibly as luxury long-stay apartments for the nearby baths.’

Bridges, walkways and balconies give the exterior a nautical flavour

Studio TaK’s faithful restoration includes the playful use of colour