‘Desert X’ is a new, site-specific international contemporary art exhibition held in and around Palm Springs in the Californian desert. Pictured, aerial view of I Am, by Tavares Strachan, 2017. Photography: David Blank

Hundreds of people gathered in an empty patch of desert in the Coachella Valley at dusk last Friday. As darkness fell, 290 patches of light illuminated the ground, spreading over 100,000 sq ft – the size of two American football fields. The effect was almost like navigating the kind of terrain one would imagine would be on a planet in outer space.

‘I was thinking about humans’ relationship to the environment and how that’s changed over a million years, and either the connection or separation that we feel to the larger environment,’ says Tavares Strachan, the Bahamas-born, New York-based artist behind the project. ‘For me, the I is not about the self, but the extended self is everything.’ 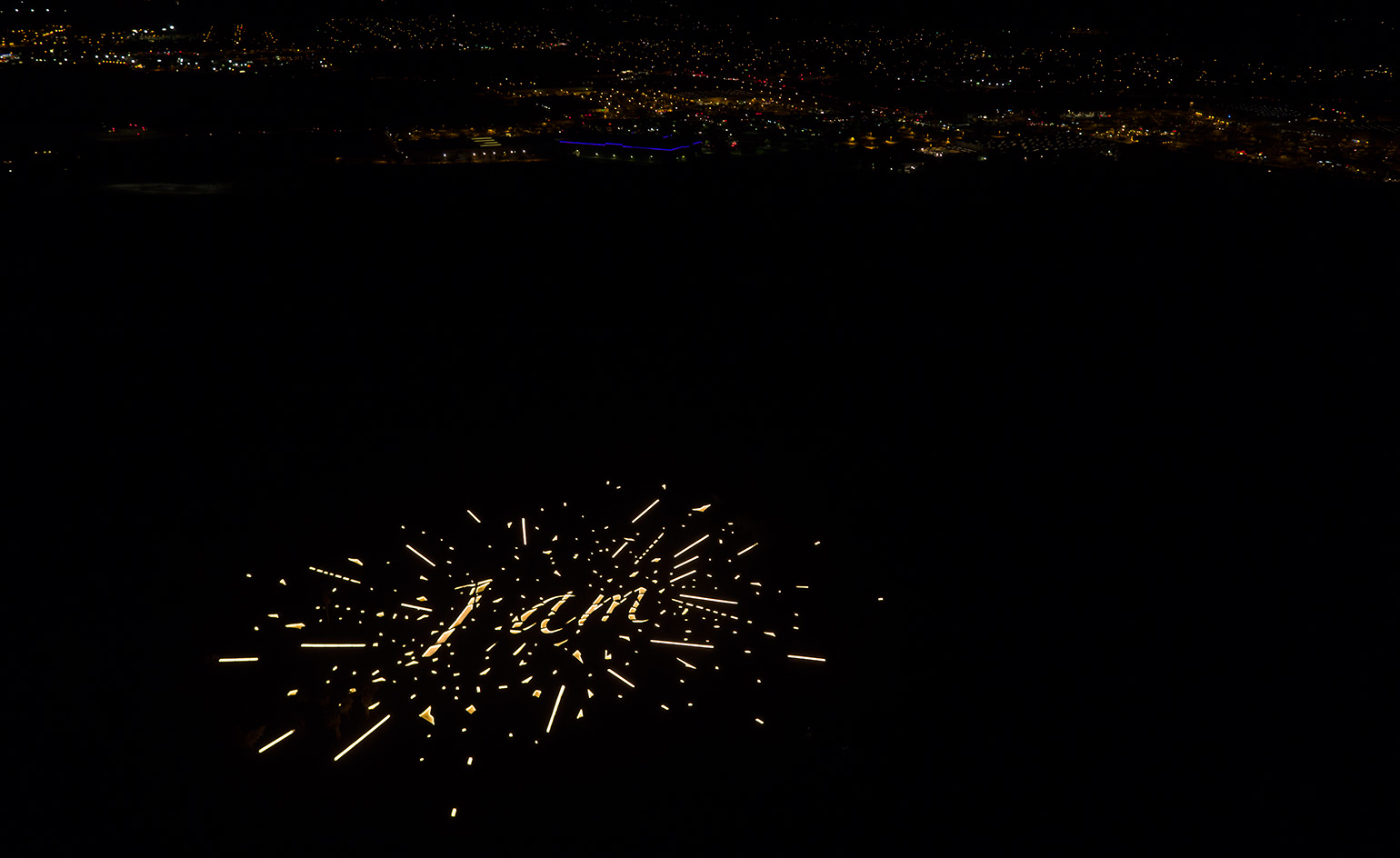 Tavares Strachan’s interventions create the phrase ‘I am’ from above. Photography: David Blank

Those who did their research would know that from up above, the seemingly unrelated light-filled craters spell out the phrase ‘I am’ – but Strachan’s intention was not for visitors to see it from two different vantage points. ‘I wanted you to be in that experience, and not think about the sky,’ he says. ‘For me it wasn’t about the duality. It was about the singular experience.’

The land art installation was part of the inaugural edition of Desert X, a biennial located in and around Palm Springs in Southern California. Some 16 artists, including Richard Prince, Doug Aitken, Lita Albuquerque, Rob Pruitt, Glenn Kaino, Will Boone, Gabriel Kuri, Phillip K Smith III and Sherin Guirguis disrupted the local landscape for an exhibition that runs through the end of April (those planning a sojourn to the Coachella Valley Music and Arts Festival will be able to get an art fix). Founder Susan Davis wanted the artists to engage with both the striking environment and the myriad sociological issues faced in the area, tapping Neville Wakefield to curate Desert X as artistic director. 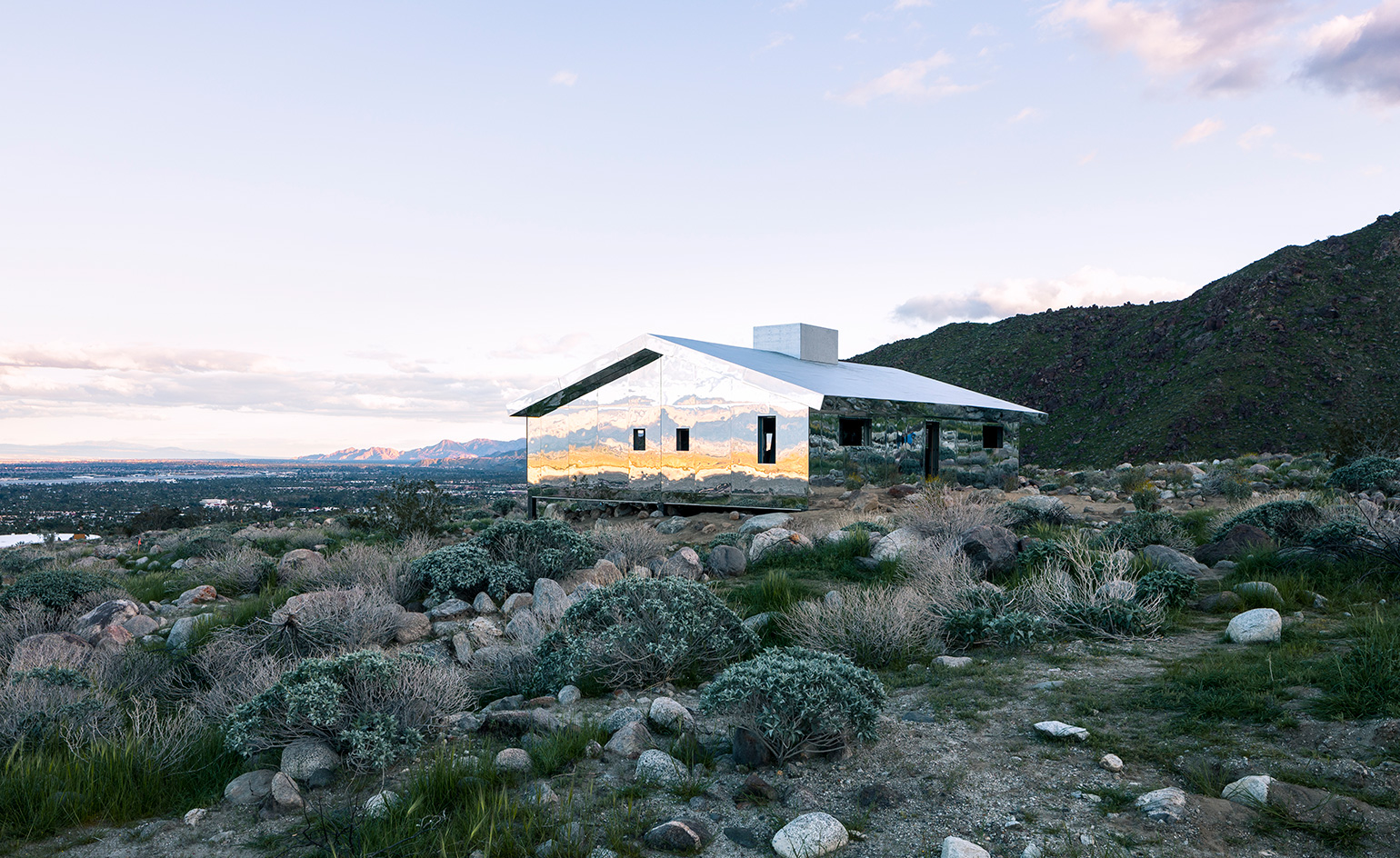 Doug Aitken’s ‘Mirage’ house, is made of mirrors inside and out. Photography: Lance Gerber

‘There’s an interesting paradox that the desert is free and open, but in fact it’s quite regulated, so we had to deal with a lot of cities in terms of zoning,’ says Wakefield, who brought together a mix of both established and emerging artists, many of whom are based in the area.

Pruitt staged one of his flea markets at the Palm Springs Art Museum. Prince covered an abandoned home with his Instagram works, tangling some of them with the tumbleweed. Kaino investigated tunnels around the world through an optical illusion that appeared to be an infinite hole in the ground. Albuquerque executed a performance of minstrels and dancers that seemed to salute the harsh desert sun. Boone put a bunker in the ground with a surprise for those who entered it, and Guirguis constructed a beehive-like structure for birds that also offered perspectives 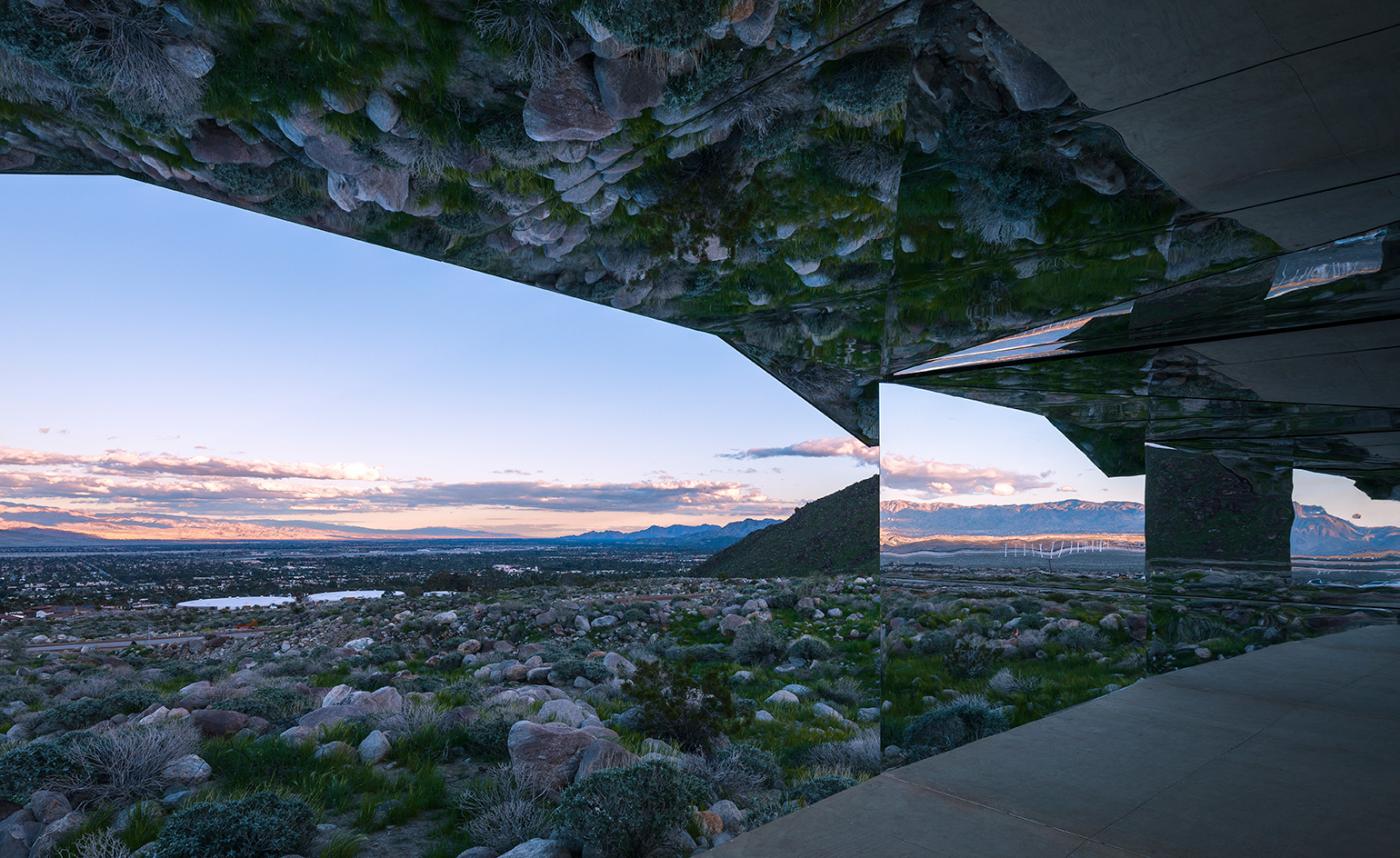 The desert will be brought to life with specially commissioned artworks and installations by a host of artists. Strachan’s project (pictured) explores the relationship between human beings and their environments. Photography: Brooke DiDonato

Strachan has dug 290 craters through a 100,000 sq ft area, each brightly lit by a neon tube. Photography: Brooke DiDonato

The artwork was informed by the philosophies of Frank Lloyd Wright, who believed that architecture should be both in and of the landscape. Photography: Lance Gerber

As Mirage pulls the landscape in and reflects it back out, its becomes a ‘a visual echo-chamber’. Photography: Lance Gerber

Desert X is on view until 30 April. For more information, visit the website