Critic Herbert Muschamp called Frank Gehry’s design for the Guggenheim New York an ’icebreaker of a design, a plan for crunching through rigid streetscapes and frozen minds’. In 2002, under severe economic conditions, the museum issued the statement that the project was to be postponed

A new edition from Metropolis Books, Never Built New York explores what the Big Apple might look like in an alternative universe of unbuilt projects. Through sketches, renderings, prints and models, co-authors Greg Goldin and Sam Lubell tell the stories of nearly 200 projects proposed by architects over the last two centuries. More than just failed plans, the unrealised buildings make us question how the urban environment effects how we live today.

In the foreword to the book, Daniel Libeskind compares architects to composers, seeing their drawings as scores hidden in the back of drawers; never played yet laden with genius. The book shows architects as idealistic, yet often unrealistic dreamers; the Skyscraper Bridges of Raymond Hood emerge eerily from their pencil sketches and R Buckminster Fuller’s glass dome over Manhattan, half a mile in diameter, looks positively futuristic. 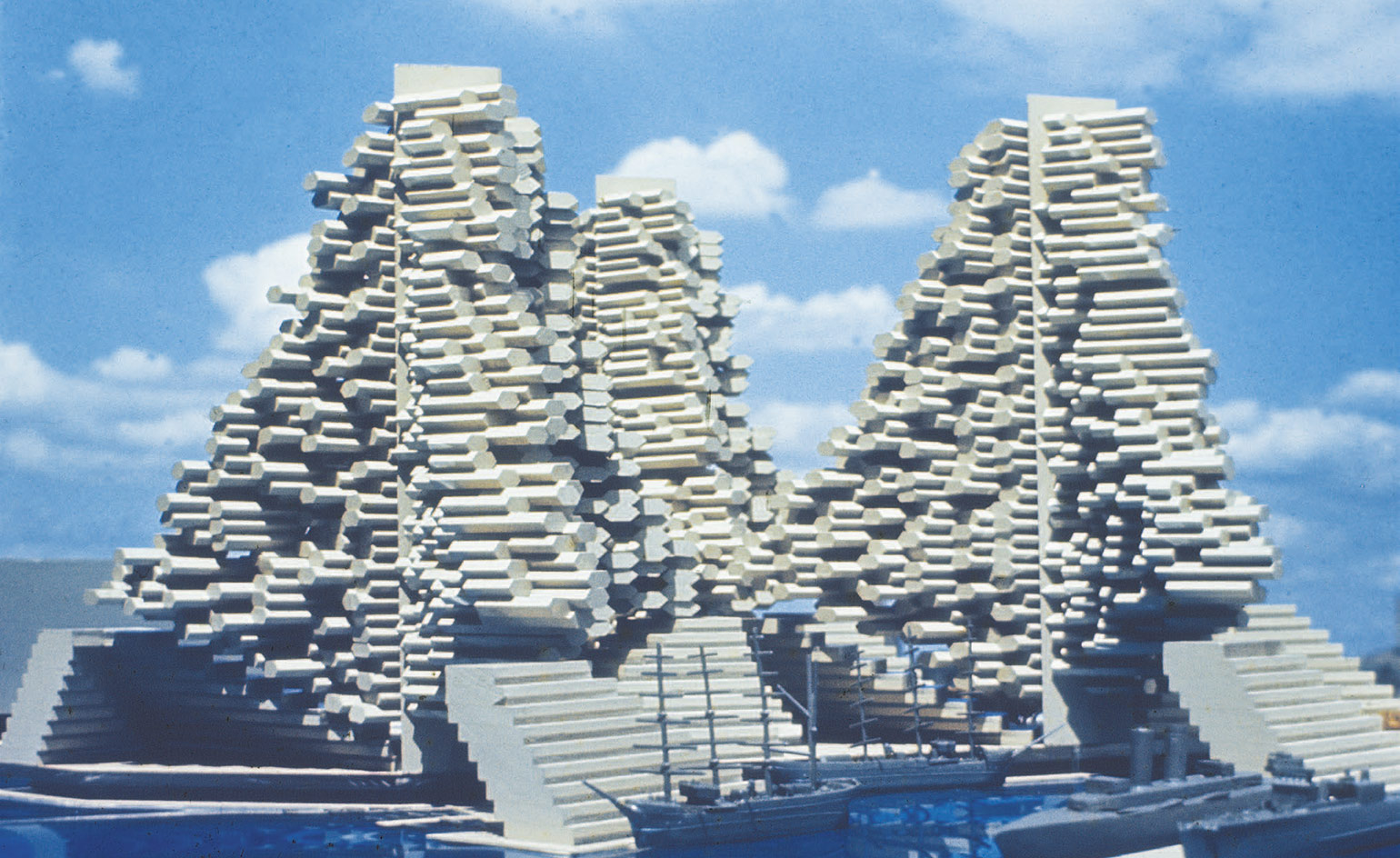 Many of these radical plans looked to solve problems that still haven’t been tackled. William Zeckendorf’s floating airport, designed in 1945 in an attempt to reduce air-travel time, rose 200 ft above street level on steel columns with elevators rising from runways; while Robert Moses’ 1949 expressway, planned to combat congestion through a six lane path, sat ten floors above the street.

Many of the plans would replace the structures which define New York today. What if the High Line didn’t exist and Steven Holl’s 1980 Bridge of Houses existed instead? There’d be a housing system combining studios for the city’s homeless with luxury apartments, devised to reuse space and solve social problems.

Other designs feel like a great loss to New York. Moshe Safdie’s triangular patterned M-shaped Columbus Centre, George Howe and William Lescaze’s blocky, modernist Museum of Modern Art or Frank Gehry’s Guggenheim, which could have landed bang in the middle of Manhattan, could have completely changed our relationship with the city.

Somehow, Goldin and Lubell still manage to tell an architectural history of New York, through economic crises, changing mayors and governments, technological developments and trends – an inverse history of a city that never was.

R Buckminster Fuller’s ’Dome over Manhattan’, which he nicknamed ’Noah’s Ark #2’, was devised in 1961 as part of a plan to control temperature in the city and save money on heating and cooling

George Howe and William Lescaze were invited to propose a new design for New York’s MoMA in 1930, but they didn’t get the job

While Daniel Libeskind’s proposal for the new World Trade Centre was chosen in 2002, this original plan was never realised and a new version redesigned in collaboration with Skidmore, Owings and Merrill’s David Childs came to fruition in 2014