Barcelona based architects PMMT’s new residential project, TR House, sits on the grounds of an existing 19th-century home belonging to the client’s parents

As if building a house isn’t already a design and logistical challenge, imagine having to build a second one on the same sloping site, but in a way that is unobtrusive whilst mainlining its own space and privacy. Barcelona-based architects PMMT solved the puzzle with commendable aplomb for this three-storey family home in St Gervasio, a residential neighborhood in Barcelona at the foot of Tibidabo Mountain.

Built in the gardens that surround an existing 19th-century home belonging to the client’s parents, the biggest challenge was to integrate the new building into the landscape, and without blocking any views of the parents’ house. The fairly steep slope required the architects to split the volume of the house, so that the whole is terraced on separate levels below street level.

The resulting orientation of the TR House has meant that most of the interiors face inwards towards an open core through which light pours in, to create a calmness of space that is almost Japanese in its austerity. 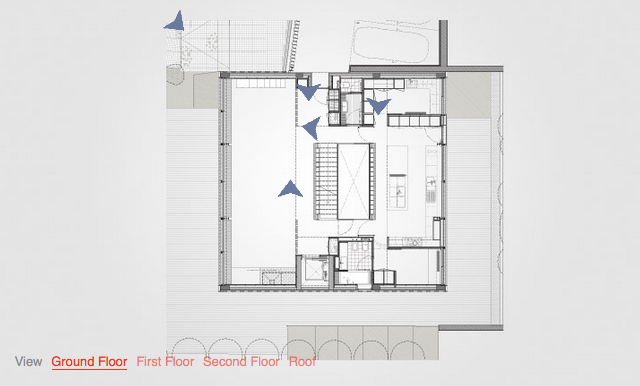 Maximià Torruella, PMMT’s general director, says ‘all of the rooms and spaces in the house are organized around a central courtyard, and all feature differing connections with their surroundings based on their specific needs.’

The façade is a mix of glass and vertical timber slats, but the eye is always drawn to the pergola on the upper floor terrace where a cloak of green vitrified ceramic tiles, assembled on a stainless steel wired net, practically cascades down the side of the building.

The use of tiles in this way – part of a new patented building material and technique dubbed Fabrik and manufactured by the New Jersey-based Shildan Group, that debuted at this year’s AIA Convention – meant the architects were able to create open internal spaces that are protected from the sun and neighbours, while blending in with the surrounding greenery.

‘Glazed ceramic has always been a traditional material in Catalan architecture because it can endure humidity and strong sun without noticeable change to its properties,’ says Torruella. ‘Moreover, Fabrik has the benefit of being a traditional material fused with a new technology. We also appreciated the possibility of using the product both vertically and horizontally, so that we could build the home’s façades and its roof using a single solution.’

The architects had to balance eye catching design with clever orientation, to blend with the landscape and avoid blocking the views from the existing home

Complementing the ceramic tiles, the rest of the building is a mix of glass and vertical timber slats

Inside, the house is flooded with light through large openings and lots of glazing

The sharp interior is calm and almost Japanese in its austerity

The new house features a generous living space on the ground floor, which combines inside and outside areas...

...while kitchen and service areas sit at the opposite end of the building, also on ground level

Upstairs, the structure features four bedrooms with ensuite bathrooms, including a master suite with its own dressing area