The 1970s boathouse was opened up the architects to feature vast windows, while its concrete exterior was softened with wood claddding, painted in an intense, industrial green. Photography: Henry Bourne. Interiors: Benjamin Kempton. Fashion: Jason Hughes

The ultimate Berlin dream home is a ‘Haus am See’, a property with waterfront access beside one of the many attractive lakes surrounding the city. The earth is almost pure sand around here, so the shorelines are beach-like and the lakes are clean. Summers on the outskirts of Berlin tend to involve lots of wild swimming, barbecues and messing around in boats. Understandably, such lakeside houses are much in demand and good ones rarely come up for sale, so the chance to do up a waterside house features quite high on the bucket list of any self-respecting Berlin-based architecture practice.

A couple of years ago, David Chipperfield Architects Berlin got the call to refurbish an unusual building for a private client on the banks of the Wannsee in Zehlendorf, one of Berlin’s biggest and most popular bathing and recreation spots. The Wannsee has several yacht clubs and, with the magnificent nearby 1930s Strandbad Wannsee lido, one of the biggest inland stretches of beach in Europe. The lake also has its own lifeguard facility and, until recently, its boathouse was located in a concrete Brutalist building designed in 1970 by the architect Robert Tepez, who also designed the massive SFB TV Centre at Theodor-Heuss-Platz in Charlottenburg. A two-storied terraced volume, the boathouse is set back slightly from the lake below a large 19th-century industrialist’s villa on a gently sloping site complete with its own little harbour.

After buying the villa and its grounds, the owner wished to convert the now empty boathouse into a studio, perhaps with the option of turning it into a publicly accessible museum at a later date – and who better to call when you want a museum refurb than the architects of one of the most stunning museum redesigns in Berlin, if not Europe: the Neues Museum in Mitte.

‘Our design was quite simple and strong,’ explains Alexander Schwarz, the design director responsible for the project. ‘We wanted to highlight the beauty of the 1970s Brutalist architecture of the house, but we also wanted to clarify the relationship between the villa, the boathouse and the beautiful landscape around.’ 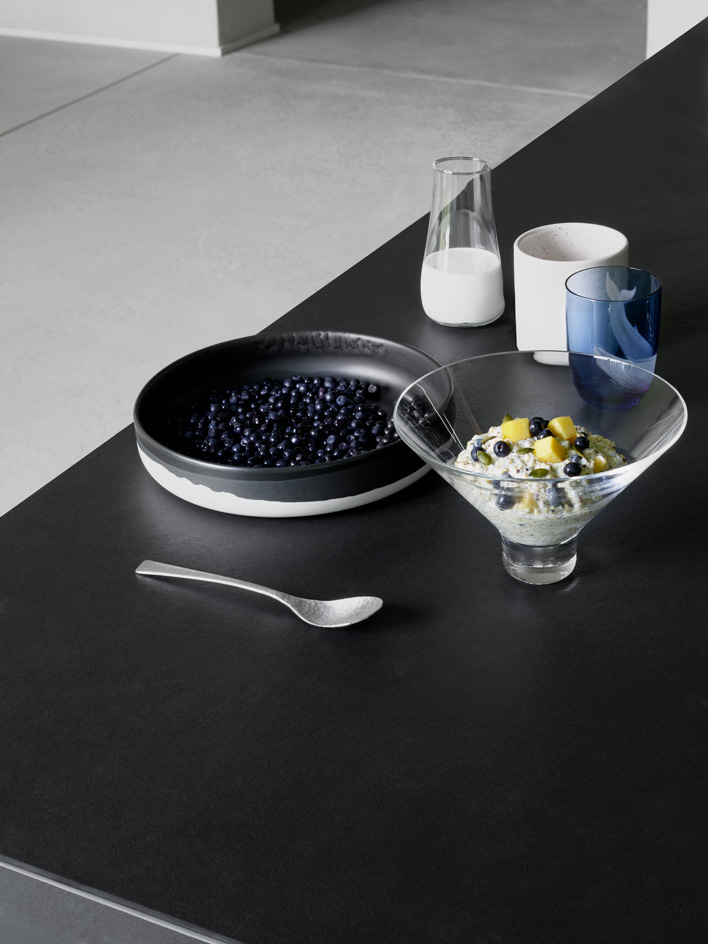 During our stay at the former boathouse, we rustled up some authentic, German delicacies. Sample our boathouse bites, and find out how to make them here

The original boathouse building was extremely functional: a stepped concrete slab with tiny windows. The architects cut out big sections of the walls at the front to allow light into the building, then wrapped the entire structure in a green-painted wooden layer interrupted by a regular series of large rectangular windows. The wood softens the concrete brut impact from without and the deep forest green colour helps this, really very large, building recede visually into the slope. The two flat roofs are also planted, increasing the camouflage effect. From the water the boathouse now looks a bit like an orangerie and has echoes of the terraced buildings of Frederick the Great’s famous Sanssouci palace in nearby Potsdam. Project architect Christof Piaskowski agrees that this was the intent: ‘The green colour was one we found on several existing metal pieces inside the house, and we decided that this should be used for all the built objects in the garden and at the waterside. This made the villa at the top of the hill the main focus of the property.’ Indeed if you passed by in the twilight in your boat you would hardly notice the boathouse was there, despite it having a far larger floorplan than the main villa above.

But there the Sanssouci similarity ends. There is not a single rococo curve or swirl in the Haus am See. The walls, floor and ceiling of the interior – half of which is filled with a double-height studio space – are almost entirely raw concrete. The staircase leading up to the mezzanine and balcony elements has a pared-down, industrial aesthetic. The light fittings – thin slivers of strip lights or simple pendants hanging from long cables – are black, as are the fitted furniture elements: a kitchen and a leather sofa landscape.

Only the rooms on the upper floor have soft oak floors giving off a delightful woodland scent from a special natural lye mix they have been treated with. Here too some of the concrete walls have been simply plastered (‘The concrete up here really was in a bad condition,’ explains Piaskowski).

Surprisingly, the intense dark green of the exterior is barely visible from the inside. ‘It is a really straight industrial green called Reseda Green or RAL 6011,’ says Piaskowski, ‘a colour often found in electrical facilities. There is no Farrow & Ball here.’On sunny summer evenings, the interior of the northwest-facing Haus am See is bathed in a delightful play of slanting light. Berlin light often seems lovely and golden, but here, magnified and reflected by the glittering lake, it is alive and playful, physically adding its presence to the architecture and bringing beauty to the brut beast.

Left: around half the raw concrete interior is given over to a double-height studio space. Right: top, £425; trousers, £485, both by Pringle of Scotland. Necklace; bracelet, price on request, both by Marni. Shoes, £770, by Victoria Beckham

Top, £630; trousers, £1,240, both by Calvin Klein Collection. Earrings; bracelet, prices on request, both by Marni