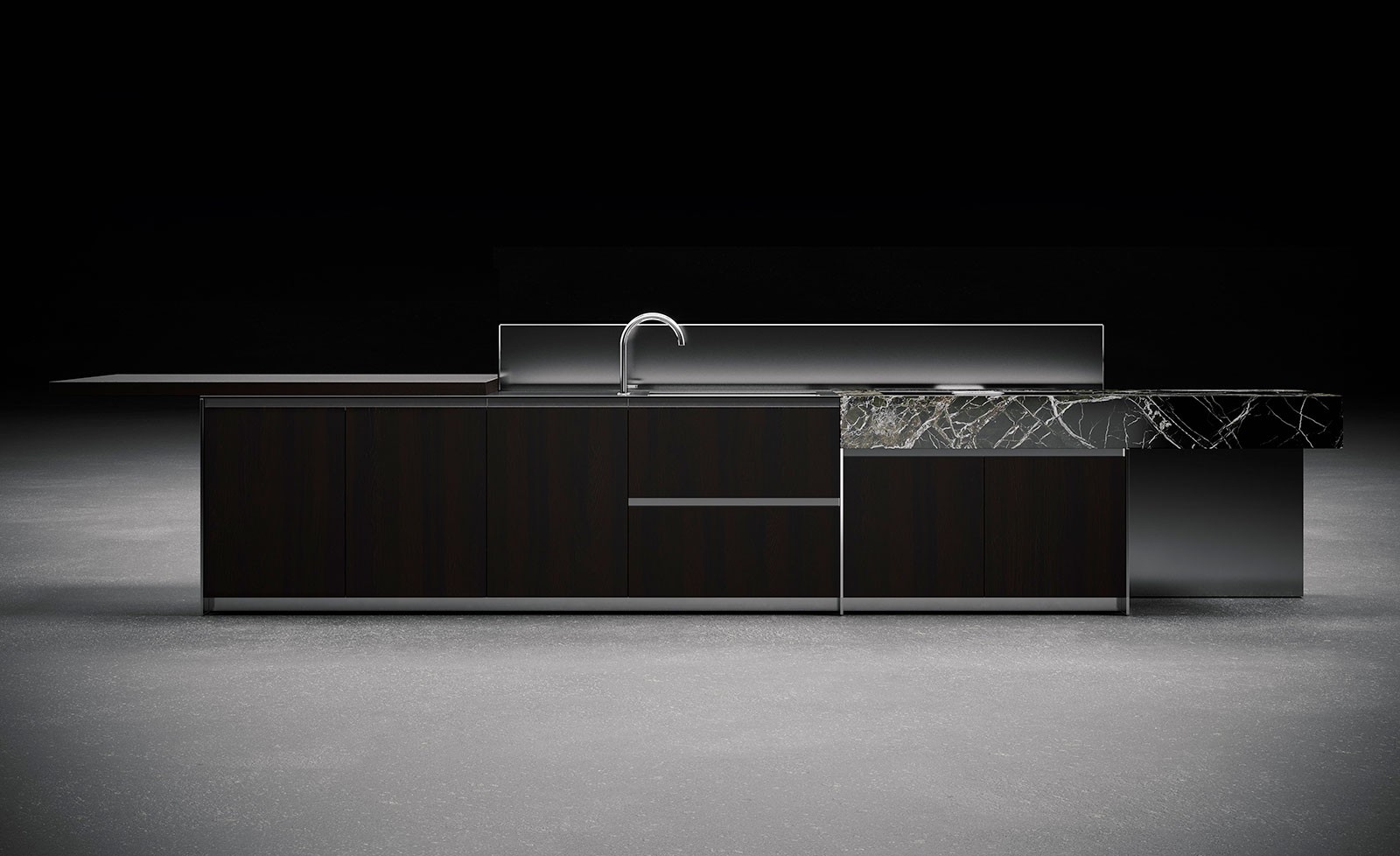 A partition between the washing, cooking and preparation side of the kitchen, and the more relaxed, living side, ISØLA was designed for both large homes or small spaces - an open kitchen that enhances and mechanises its surrounding environment. Rossana and Carlo Colombo conceived ISØLA as an architectural, stand-alone module that behaves more like a piece of furniture than a series of static units. The spirit of five international locations is interpreted in five different, handcrafted material forms, representing, says the Rossana team, “the synthesis between function and aesthetics.” 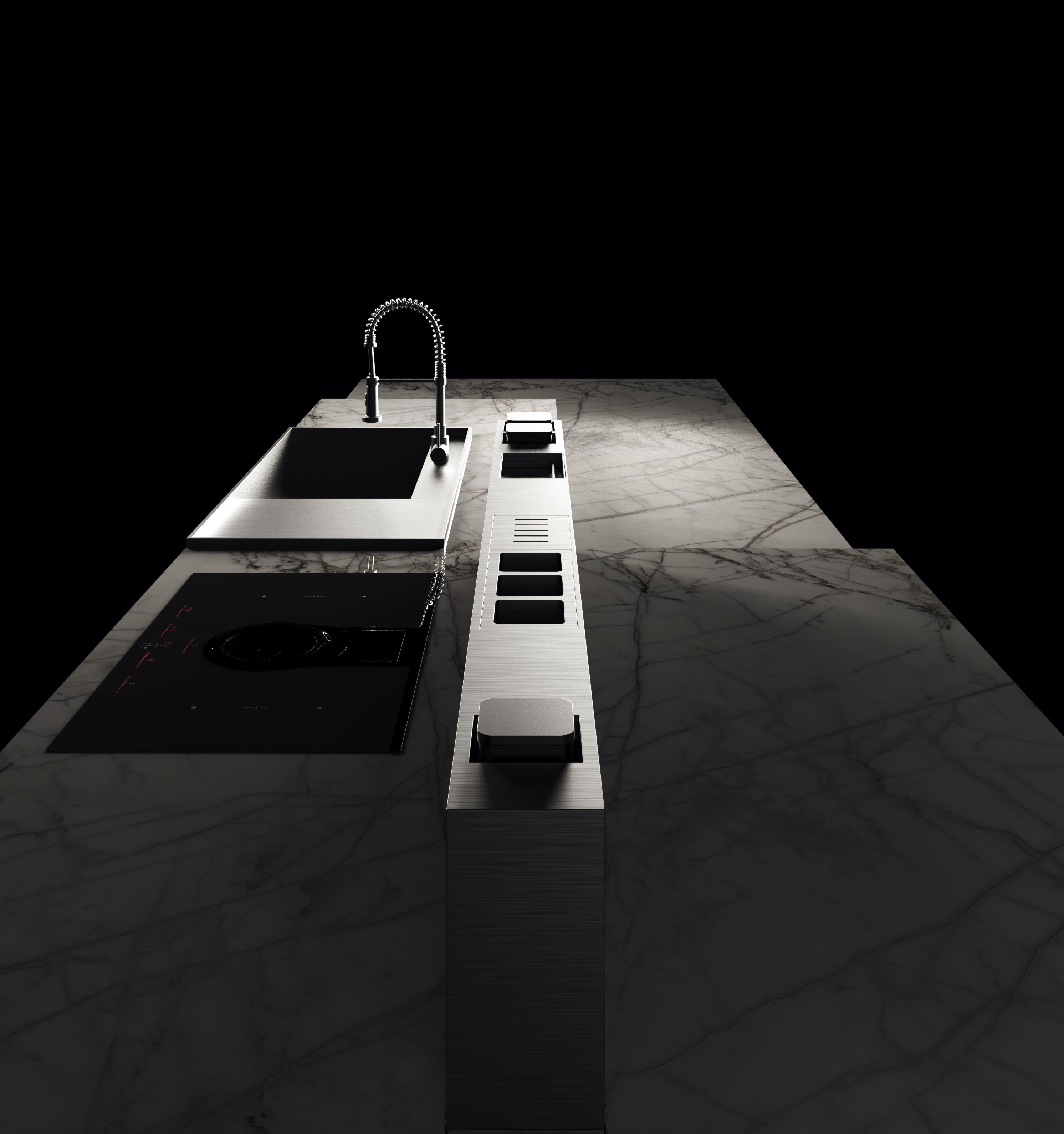 The MILAN ISØLA kitchen is the quintessence of the Italian urban lifestyle; a compact architectural divider with both galley and living room-facing sides. On the lounging facia, boiserie panelling combines with steel shelves crossing the Aria marble like blades, highlighting the varying volume combinations of the island work tops. The functional side is characterised by the use of new materials as Thermo-treated Chestnut panels and the snack table  tops finished in thin satin-steel or Breccia Imperiale marble. 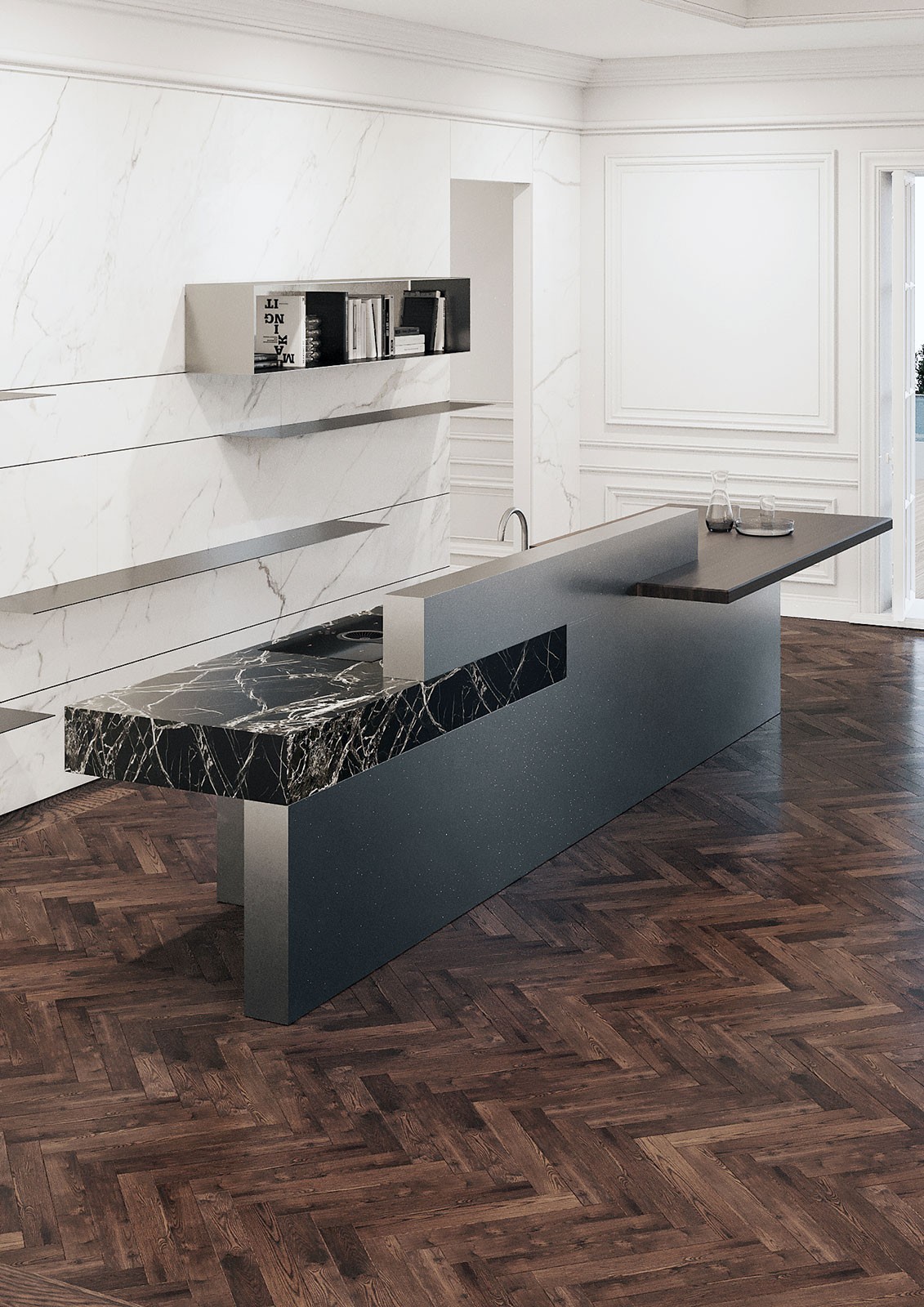 ISØLA IBIZA is a double-depth island in warm Orizzonte steel finishes with a Trinity White stone table top and stratified extra-clear support. Designed to be at the centre of a house for home entertainers it offers a partition between the washing, cooking and preparation side of the kitchen and the living side. Vertical steel blades and Oak Thermo-treated panels are present in the base units and in the tall, wall-mounted units. 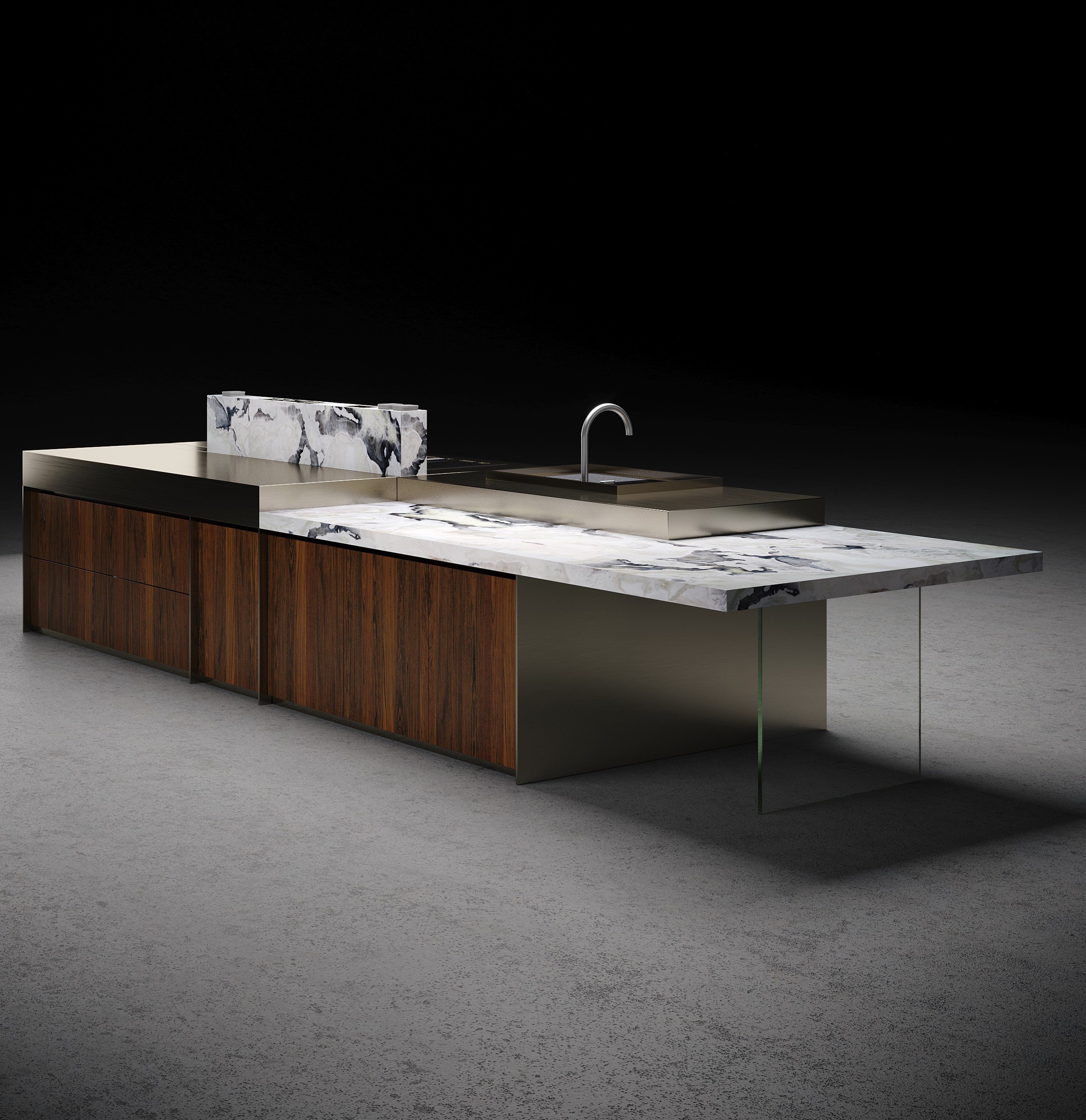 ISØLA PARIS is a corner structure with peninsula and tall units. The grain of the Zebra granite is in contrast with the polyester glossy lacquer Grigio Londra, strongly characterising the living side of the peninsula and the back panel and open elements of the heightened  units. ISØLA is an open, architectural, stand-alone model, perfectly aligned with its surrounding environment.  With a material design similar to a piece of furniture, its work top is made of double thickness Orizzonte Steel. 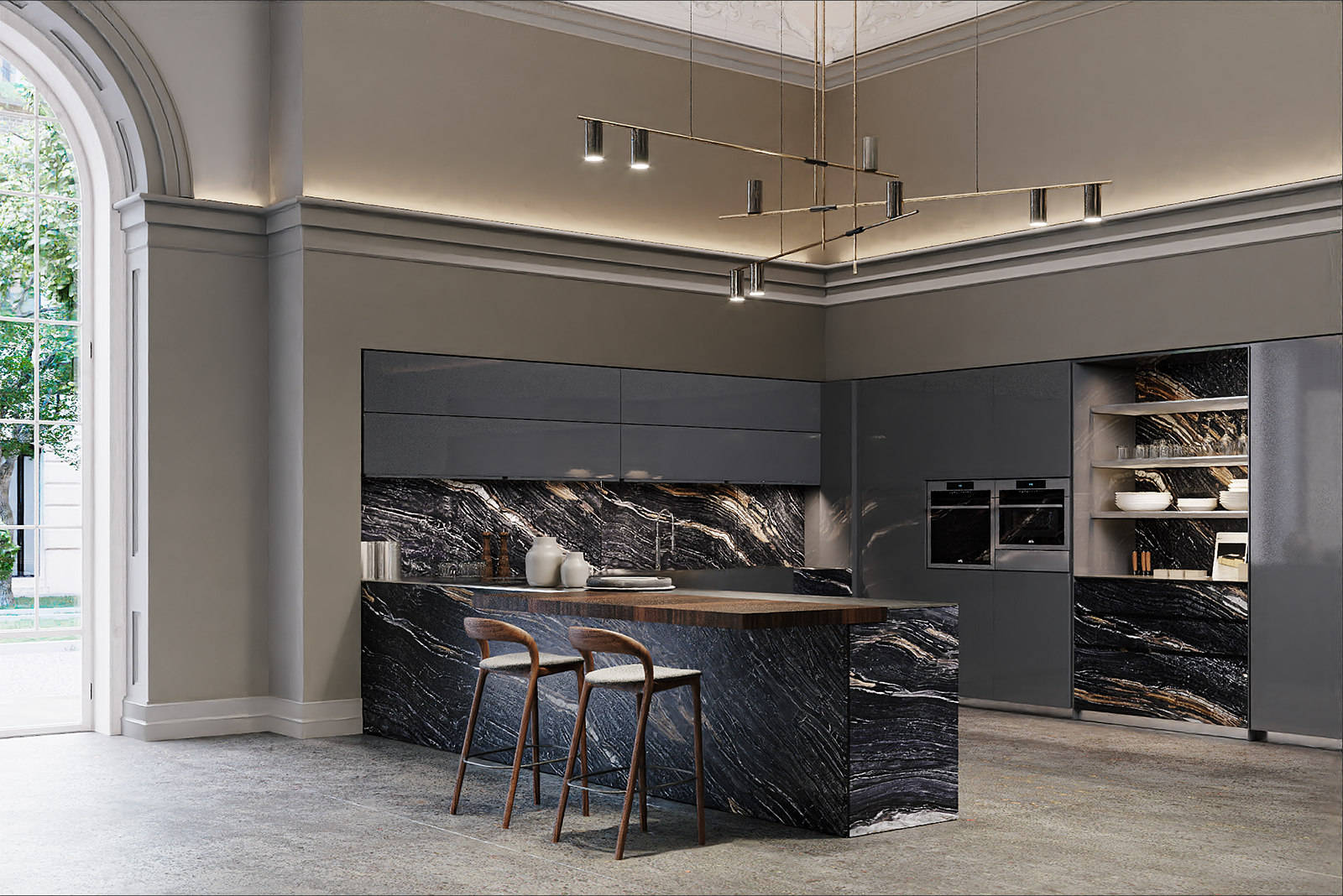 Enhanced by the presence of a Calacatta marble table and snacking area ISØLA NEW YORK is a warehouse-friendly partition made up of a satin-finished steel island with double-thickness worktops and Fossil Ash cabinetry. Ideal for Manhattan loft-living, the kitchen work area is completed by a deep, integrated steel sink and single gas burners with frontal control and a downdraft hood. 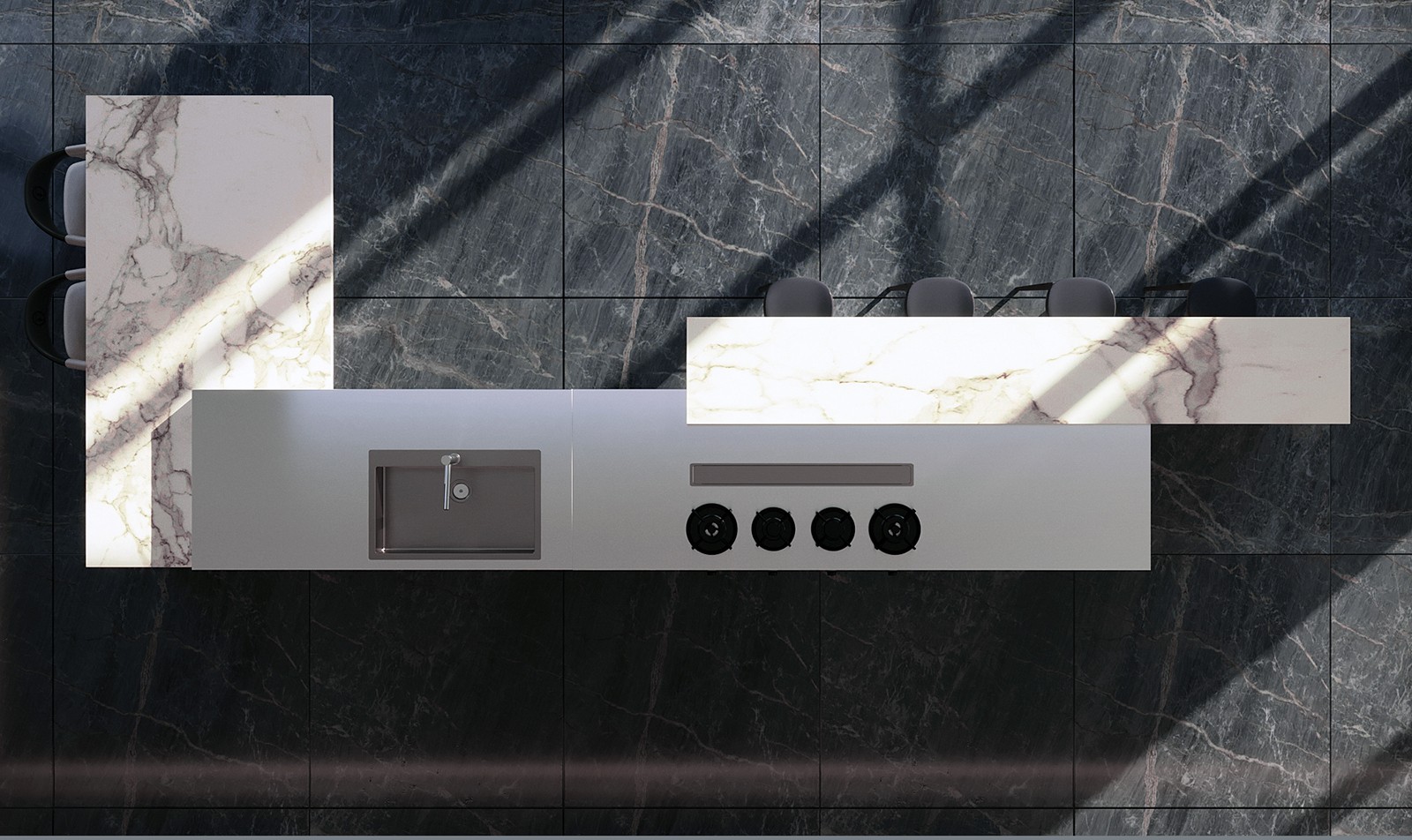 Like a functional art piece, the living side of the ISØLA SINGAPORE partition is personified by an elegant Melbourne marble wall unit, furnished with open elements and a bar with a Fossil Ash snack table. On the busier kitchen side, a functional area is enhanced by the high and low thickness top in Orizzonte Steel. The vertical blades cut the panels’ stone creating a discontinued graphic element. 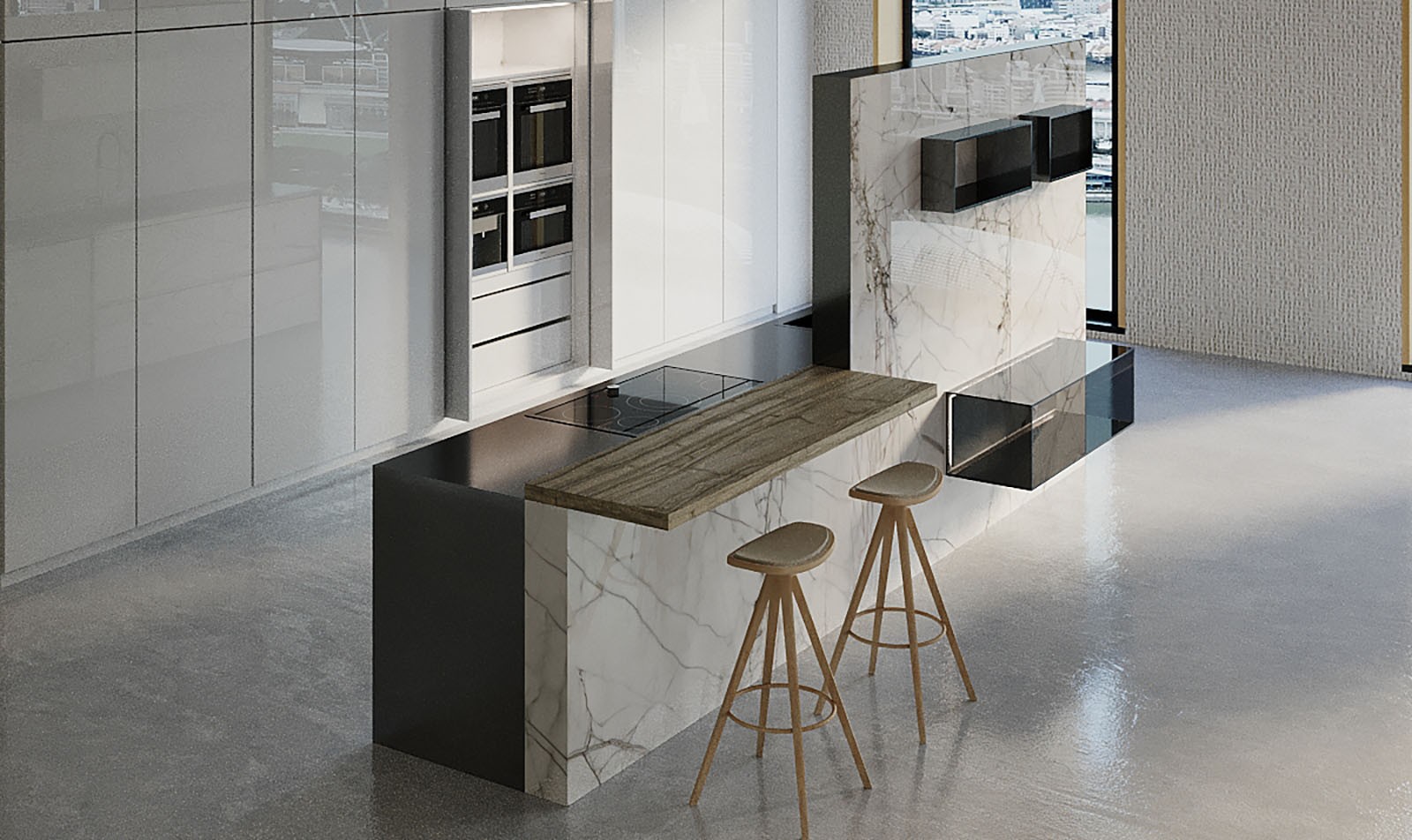 “I decided to shape materials and styles through an evolutionary process that falls into the category of pure and dynamic language,” explains ISØLA designer Carlo Colombo. “The project’s inspiration is the architectural component that presents itself through well-defined shapes and strong lines, making it possible to design the island both horizontally and vertically, transforming it into a piece of art.” 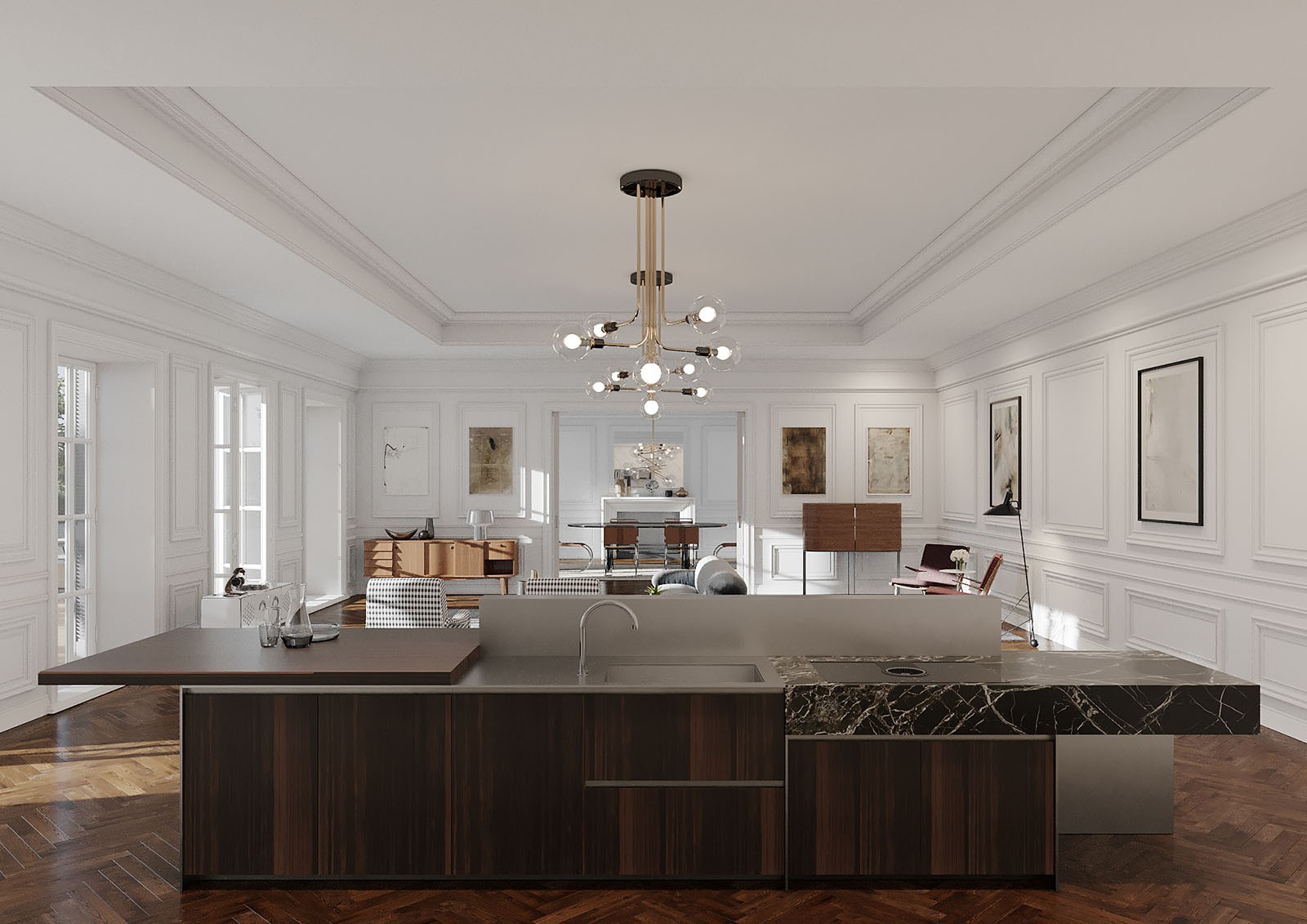 Natural stone and the metal parts are treated in a way that brings the materials to life. “This  completes the creative process; the environment and the compositions are full of sparks and details creating harmony and aggregating capacity in the domestic layout.”

“We create what we define as ‘kitchen-furniture’,” explains Rossana CEO Emanuel Colombini. “With ISØLA, we didn’t want to simply produce a reception kitchen for very important homes. We wanted to offer a product that could also decorate smaller environments because, at the international level, the trend is to have small pied-à-terre in the centre of large metropolitan areas: ISØLA is the perfect answer to these living spaces.”