Chance encounters: Loewe brings painting and pottery together in Miami

At Art Basel Miami Beach last year, Loewe brought together four major British artists for the launch of its Miami Design District store. A year later on, the second iteration of ’Chance Encounters’ sees the brand’s creative director Jonathan Anderson marry the work of the late Irish artist William McKeown and British ceramicist John Ward. ‘I just find them mesmerising, [McKeown’s] pictures,’ said Anderson, who had just paid a visit to the Rubell Collection. Anderson paired McKeown’s paintings with the vessels by Ward, who Anderson has been a fan of for years.

Anderson, who collects work by both of the artists, filled the platform of the massive granary which doubles as the retail space’s centrepiece that pays homage to Loewe’s Spanish heritage, with a number of Ward’s pots. One series featured graphic black and white patterns various vessels, while another group of his works had a natural ombré finish. The way Ward pours, paints and sprays the finishes of the vessels makes for a soft, gentle finish. 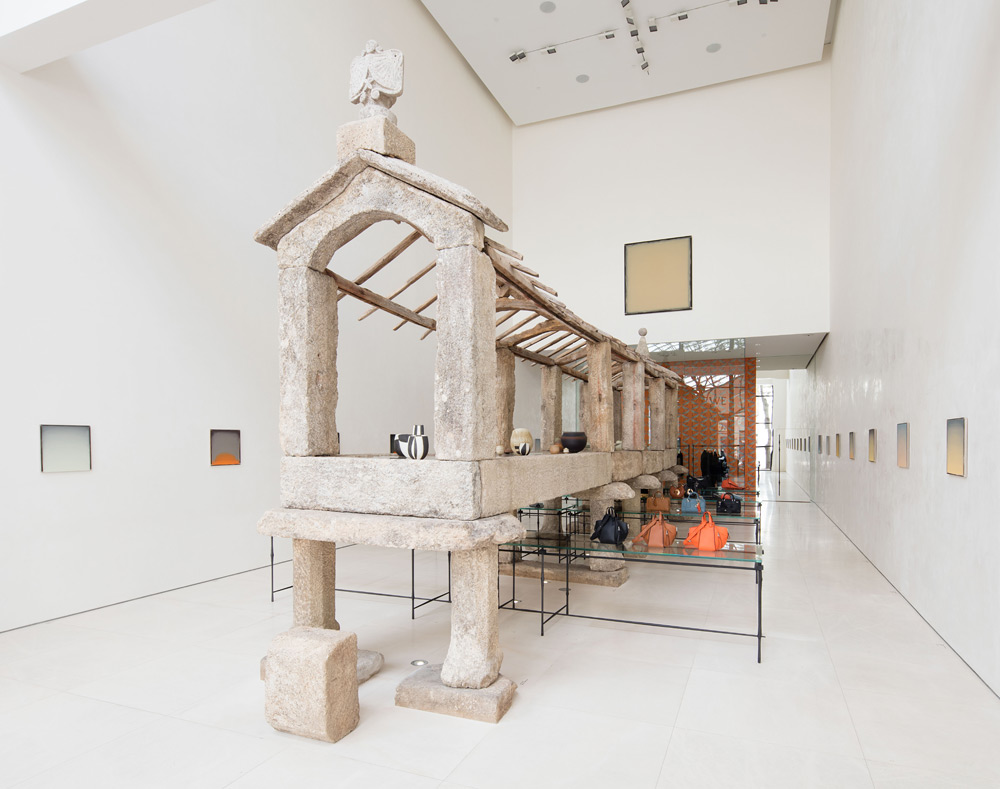 McKeown’s hazy, abstract ombré paintings, which bring up the work of Mark Rothko, lined both sides of the Loewe space. The colour palette, which contained greys, blues and yellows that seem to fade into darkness and light, complimented the Loewe handbags and accessories displayed in the boutique.

At the rear of the store, Cloud Cuckoo Land, a wallpaper by McKeown that featured a whimsical, yet haunting pattern of grey birds with a leashes tied around their neck necks against an orange backdrop. In the middle hangs a lone greyish blue, grey and cream ombré painting by McKeown.

The exhibition of the two artists, which runs through March next year and was made possible by the Loewe Foundation, created a seamless interaction between the works. ‘It’s like a conversation piece, and I think the dialogue between the two is incredible,’ said Anderson.

Left, the exhibition creates a seamless dialogue between the two artists’ works. Right, a lone McKeown painting hangs on the Cloud Cuckoo Land wallpaper, also by the artist

’Chance Encounters II’ is on view until 31 March 2017. For more information, visit the Loewe website