Located just a short walk from the sea, Casa Tiny can be found nestled in an area of dense vegetation near the surf town of Puerto Escondido, on Mexico’s idyllic Oaxacan coast. One of the first built offerings from young architect Aranza de Ariño, the little beach house is a compact, romantic retreat for two.

The strongly gabled roof, which catches the breeze from the sea, is a playful reference to the Tiny House Movement in America where, in reaction to high rents, people began building their own 100–200 ft homes. But Casa Tiny is far from makeshift – rather, it’s a sturdy construction built to withstand the elements. 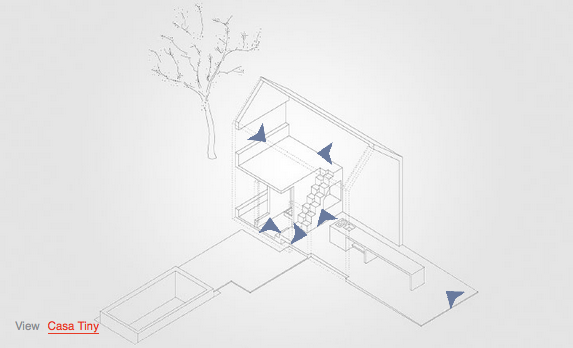 The roof, floor slabs, stairs and furniture are all built out of concrete, which appears everywhere in the house, giving it a robust feel. The other main building material is the native parota wood, a dark honey coloured timber less dense than other exotic hard-woods. This is used for the doors, windows, closets and shelves. While the house is small, the durable construction makes Casa Tiny feel opulent and secure.

Two concrete terraces extend out from the core, one encompassing the swimming pool and the second an extension of the kitchen. Its concrete dining table runs continuously from the cooking area to the terrace, encouraging dwellers to throw open the shutters and mellow out with nature.

Concieved as a bijou holiday home, Casa Tiny is the perfect retreat for two

The fast-growing wood – used, for example, for the house’s shutters – is native to this part of the Americas

Orientated towards the sea, the high gabled roof of Casa Tiny welcomes in the salty breeze

The concrete dinning table runs continuously from the kitchen out onto the terrace, uniting inside and out