Joris Laarman’s work has undertaken a continuous exploration of shapes, materials and techniques. Pictured: the ’Aluminium Gradient Chair’ from the designer’s Microstructures series

Earlier this year, Friedman Benda presented a survey of Dutch designer Joris Laarman’s research in digital fabrication. Shown at the gallery’s mega-booth at Design Miami/Basel, the retrospective featured large-scale designs by Laarman that pushed the boundaries of form and material.

In 2004, Laarman started a lab as ‘an experimental playground to study and shape the future’. Having graduated from Design Academy Eindhoven the previous year, the designer’s first notable work came in the form of a decorative radiator that defied more traditional utilitarian designs.

Over the past decade and a bit, Laarman’s work has developed into a continuous exploration of shape, material and technique, and his lab has overcome engineering hurdles as well as traversing new frontiers in making. His method of working consists of developing large series and collections, each taking up to six years to engineer and manufacture in-house. What marks Laarman’s vast body of work is the subtle organic forms of his pieces, which are simultaneously decorative and functional, ranging from tables and seating to partitions and dividers. 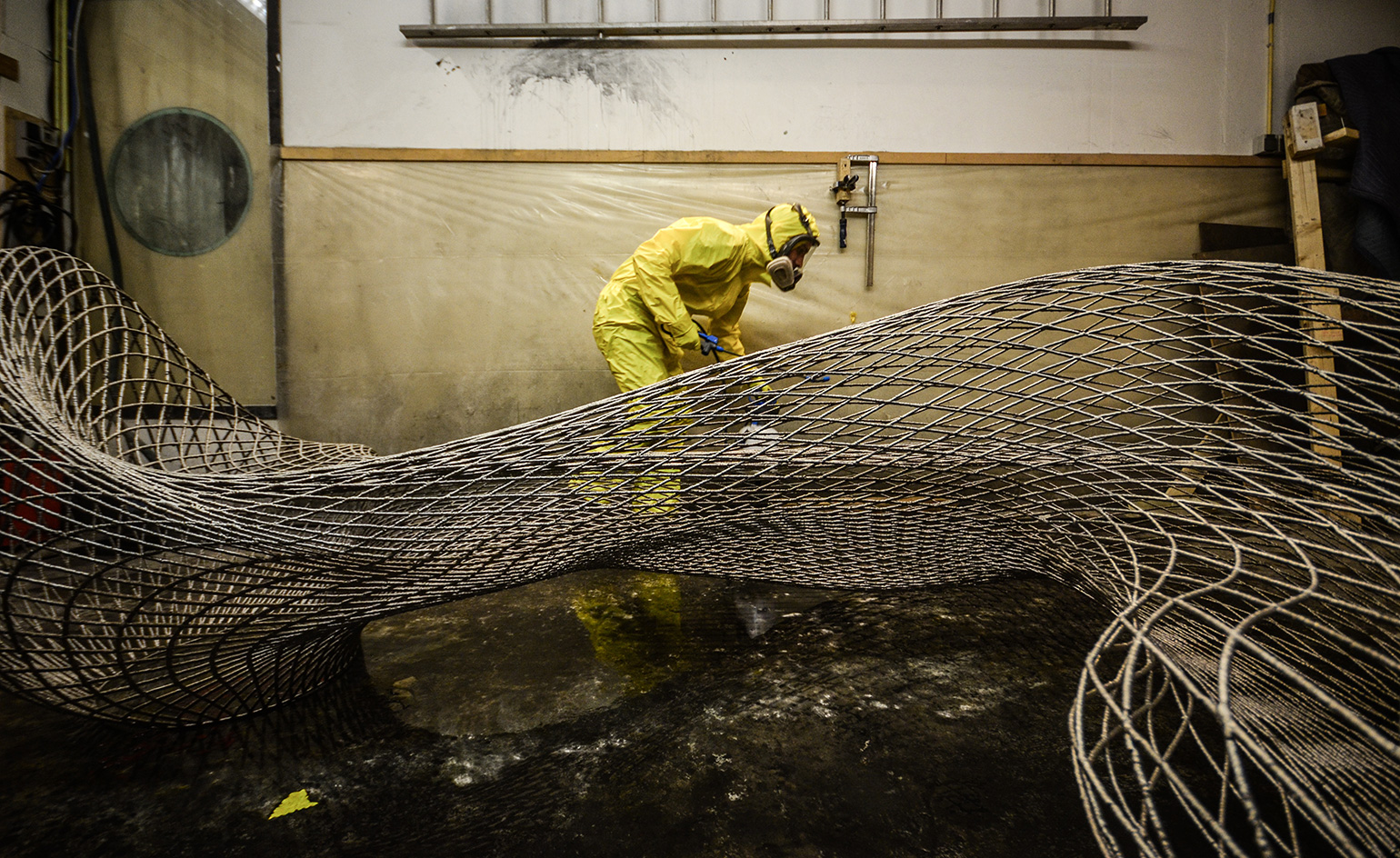 The making of the ’Dragon Bench’, a gravity-defying sculptural net created with the lab’s recently developed MX3D metal printer

‘I don’t prefer to work in a specific material,’ explains the designer, whose oeuvre seamlessly incorporates experiments in metal, wood, resin and marble, among other materials. ‘Every design asks for an approach in material that fits best. This could be a large variety of materials including materials that didn’t exist before yet.’ But even when using traditional materials, Laarman’s approach is radical: using a combination of 3D printing and welding, for example, he created his ’Microstructures’ series, intricate 3D-printed chairs clad in copper for strength.

His ’Dragon Bench’, a gravity-defying sculptural net, was created with a new invention recently developed by the lab, a new-generation metal printer. ‘In 2014 we set up a new company called MX3D that focuses on robotic metal printing,’ Laarman says. ‘The sculptural works I create with these machines also function as technical research.’ Thanks to this new technique, Laarman and his team were able to print with metals such as steel, stainless steel, aluminium, bronze or copper, resulting in light structures that don’t require support. 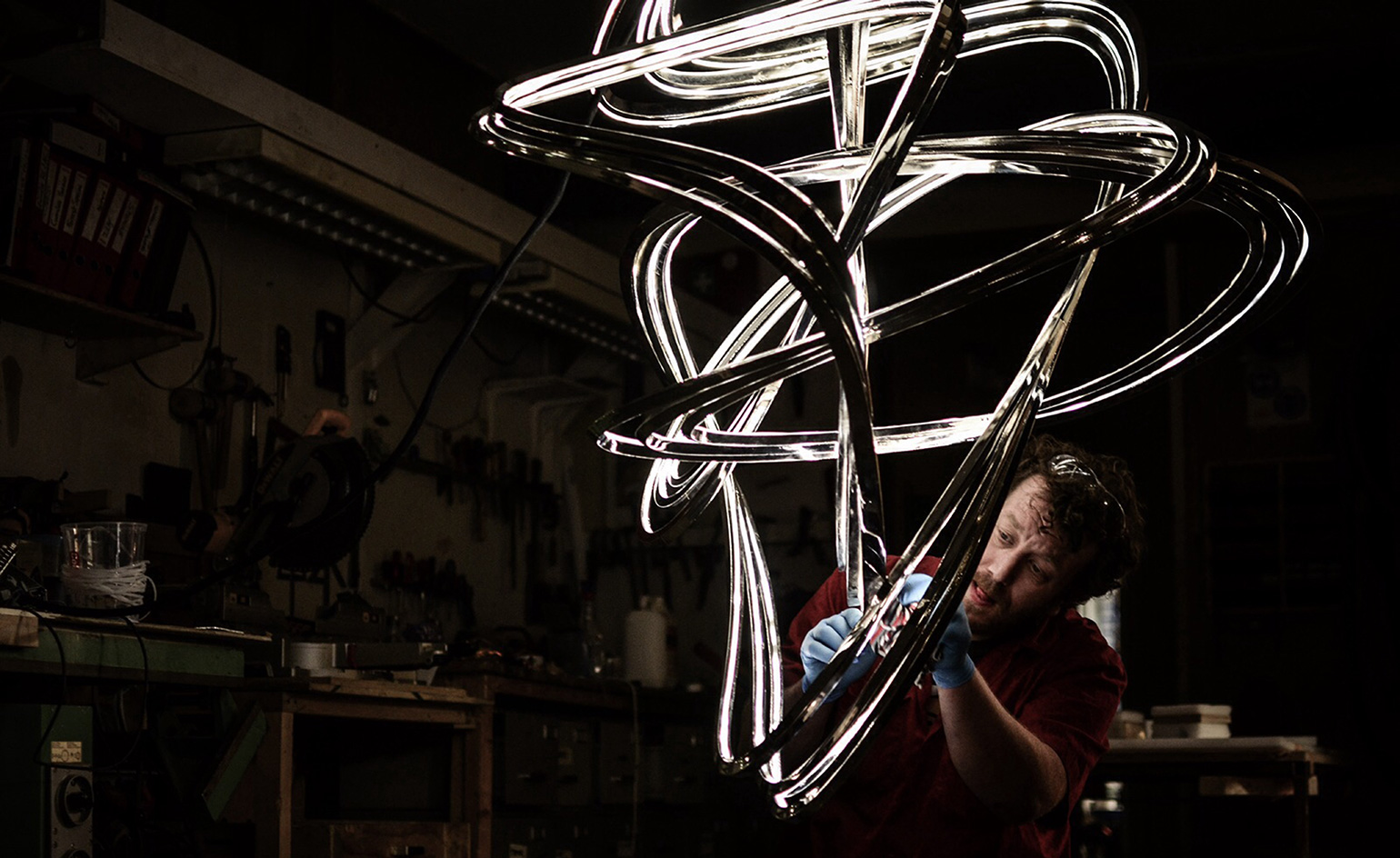 An engineer at work on Laarman’s ’Strange Attraction Lamp’

The same technique will be crucial for Laarman and his team’s next operation: a 3D printed footbridge built over one of the oldest canals in Amsterdam, fully functional and entirely built by robots. ‘Over the past several decades, the transition from analog to digital has revolutionised many fields, but digital technology is also starting to define an evolution in the way we manufacture, distribute and recycle products,’ he notes. ‘Inspired by emerging industrial manufacturing methods in the early 20th century, modernist pioneers valued and changed the aesthetics of design. Now the new realm of digital fabrication is shifting our current notion of design and pushing artists to explore the endless new possibilities of digital manufacturing.’

’Adaptation Chair’, from the Microstructures series of 3D-printed metalworks

A view of Laarman’s lab, founded in 2004 as ‘an experimental playground to study and shape the future’

Pictured left: the MX3D at work on the ’Dragon Bench’. Right: a detail from one of Laarman’s ’Makerchairs’, wooden pieces created using 3D printers and CNC milling machines