Two Temple Place, a late Victorian mansion built by William Waldorf Astor on the north bank of the Thames, is one of London’s lesser known architectural gems – and lesser known galleries. Until April, its grand, eccentrically embellished halls will be filled with paintings, poems, furniture, photographs, sound installations, scale models, films and paraphernalia from the Sussex Modernists. They comprise Sussex Modernism: Retreat and Rebellion’, the most interdisciplinary exhibition the space has staged in its six years promoting culture.

For curator Hope Wolf, a lecturer in British modernist literature at the University of Sussex, including all these different disciplines is essential to understanding the diverse group. But pulling together such an eclectic exhibition was no mean feat. Wolf mined local archives and enlisted contacts in nine galleries and museum-houses across Sussex.

The objects she uncovered plot a visual history of the region. We discover that in the first half of the 20th century, the rolling hills of provincial East and West Sussex became unlikely hives of creative activity. Artists, craftsmen and writers escaped metropolitan London for the rural idylls and farmhouses that were to become cultural epicentres. ’I was keen to question why these people went to Sussex, what they thought of it, or whether they were interested in it at all,’ explains Wolf. 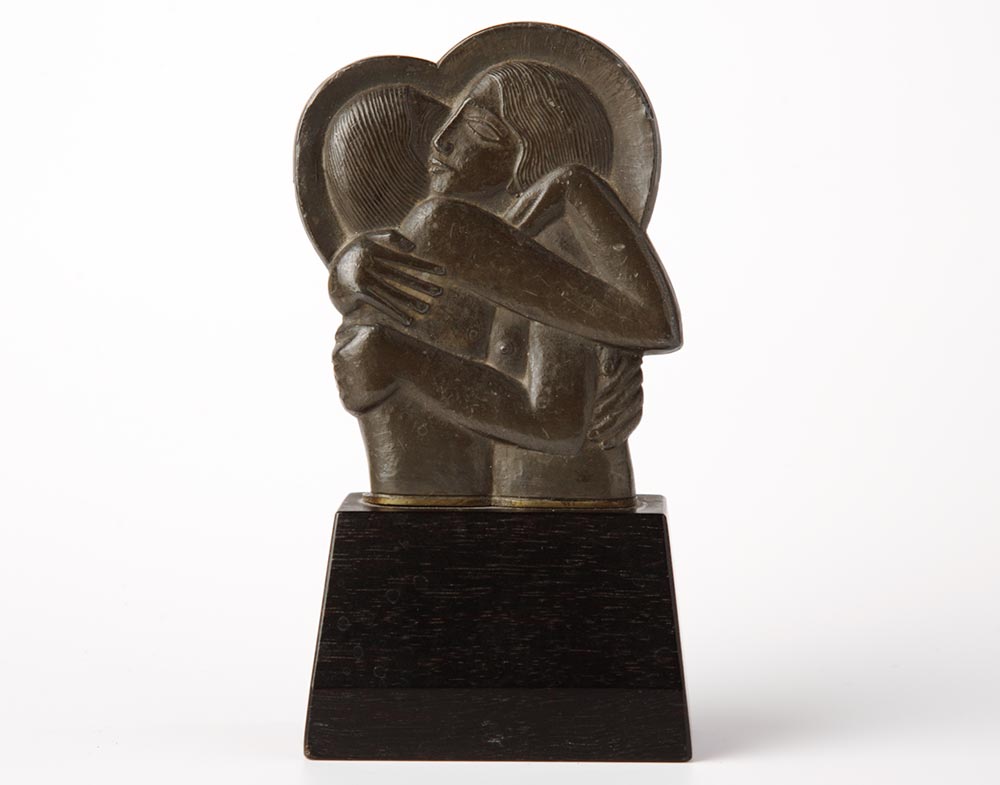 We begin our countryside ramble in Ditchling, near Brighton, where a Catholic craft community advocating working by hand was founded in 1920. The most famous member was sculptor and typographer Eric Gill. Here, we see his blending of religious iconography and eroticism through a series of sketches and sculptures. The posthumous revelations surrounding Gill’s reprehensible sexual proclivities has created a serious ethical dilemma for curators, and marred the idea of Sussex as a utopian retreat.

Nonetheless, the Ditchling group’s desire to merge utility with art provides a solid basis on which to build our picture of the Sussex modernists. Unlike these patriarchal craftsmen (they did not allow female members), the Bloomsbury group was feminist and progressive – and both were working concurrently, less than half an hour’s drive down the road. Charleston, the rural home of London’s intellectual set, marks our next Sussex stop. It is represented by a selection of paintings and murals by Duncan Grant and Vanessa Bell, including a powerful nativity scene for which local Sussex farmhands served as models.

From here we journey onward through the South Downs and coastline, past staggering works by John Piper, Pablo Picasso and Edward Wadsworth to painter Peggy Angus’ cottage Furlongs and collector Edward James’ extravagant Monkton House. Displayed in the original glass-fronted wall cabinets of Two Temple Place, their works couldn’t look more at home, and visitors are transported back in time. We sense the political undertones of the period bubbling away behind the glass – like in the Angus sketch of a reclining nude reading The Crisis of Capitalist Culture with a wry smile, never before shown in public. 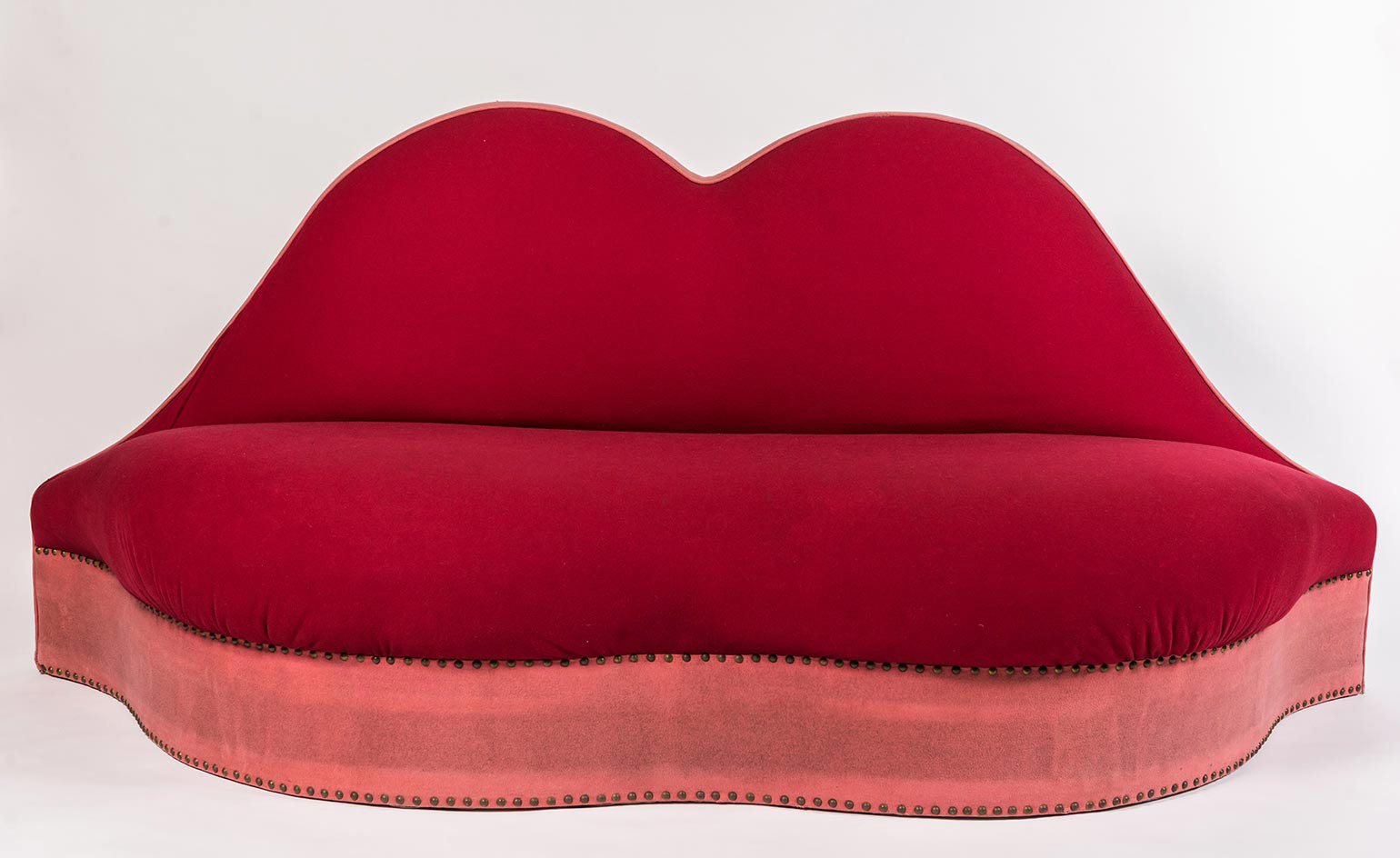 To fit in the extensive range of works, Wolf has made use of every space in the building, including its fanciful stairway, replete with ornate balustrades and newels. Here, the red ’Mae West’s Lips’ sofa, commissioned by Edward James and designed by Salvador Dalí in 1938, juxtaposes with the dark wood of the staircase.

But at the top of the stairs we are transported into a modernist world that seems a million miles away from this decadence. Humble and quiet, Farley Farm House (near the delightful-sounding village of Muddles Green) was home to photographer Lee Miller and surrealist artist Roland Penrose. For 35 years, from 1949, their kitchen table hosted many renowned international guests – notably Picasso, Joan Miró and László Moholy-Nagy, whose photographs of the modernist De La Warr Pavilion are displayed here next to its impressive scale model. 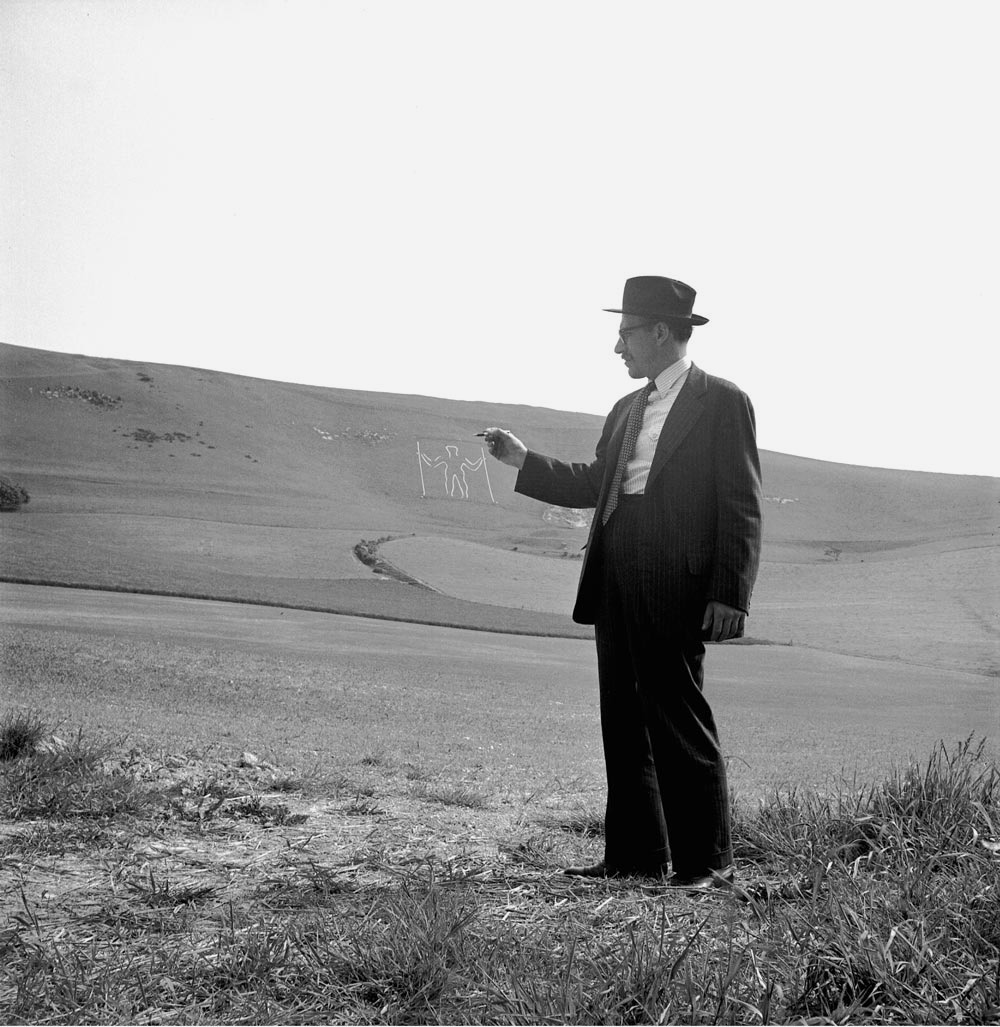 Like the Hungarian Moholy-Nagy, many influential artists were attracted to Sussex from overseas. Indeed, Wolf was surprised to discover just how many émigrés appeared in the region in the early twentieth century – German-Jewish Erich Mendelsohn and Russian-born Serge Chermayeff, for example. Not everyone, it seems, was escaping the British capital; they were escaping war-torn mainland Europe, too.

In places, Sussex is just as close to the French coastline as it is to London, affording it a unique vantage point for war time artistic documentary. In The Times, Virginia Woolf described hearing bombs fall on France from the South Downs as ’the beating of gigantic carpets by gigantic women’. The immediacy the English writer depicts gives the whole region a sense of creative claustrophobia.

So much pioneering, problematic art was being produced, and in such close proximity. Wolf describes it as a ’visual cacophony’. The curator teases out connections and synergies between these interrelated communities, creating a coherent path through the region’s cultural history. Nonetheless, she has left many questions unanswered, for the audience to draw their own conclusions. Whether the Sussex modernists were rebelling, retreating or simply relocating, Wolf believes it may take ’any number of future exhibitions’ to fully understand. This insightful exhibition offers plenty to keep us going until then.

The arts and crafts movement of Ditchling, in Sussex, advocated working by hand

’Sussex Modernism: Retreat and Rebellion’ is on view until 23 April. For more information, visit the Two Temple Place website