Copper wire, flora and a boundless imagination are the tools of London-based Rebecca Louise Law’s artistic practice. With them, she cultivates extraordinary installations, verdant portraits and even sculptures that explore the dynamic between man and nature. ‘I want to share and preserve the beauty of the Earth,’ says Law. ‘I want people to really feel nature and cherish it. That’s what motivates me.’

This month, Law is lending her green-fingered talents to Now Gallery on London’s Greenwich Peninsula for an immersive spring installation titled The Iris. ‘My aim was to create a seasonal work, which opposed but also complimented its environment – which is essentially a concrete metropolis,’ she reveals. In order to do this, she examined the history of the land in which the Now Gallery was built upon and discovered it was ‘a wetland of tidal marshes’ where ‘all sorts of unsavoury things took place, involving the storage of gunpowder and even dodgy dealings with pirates.’ 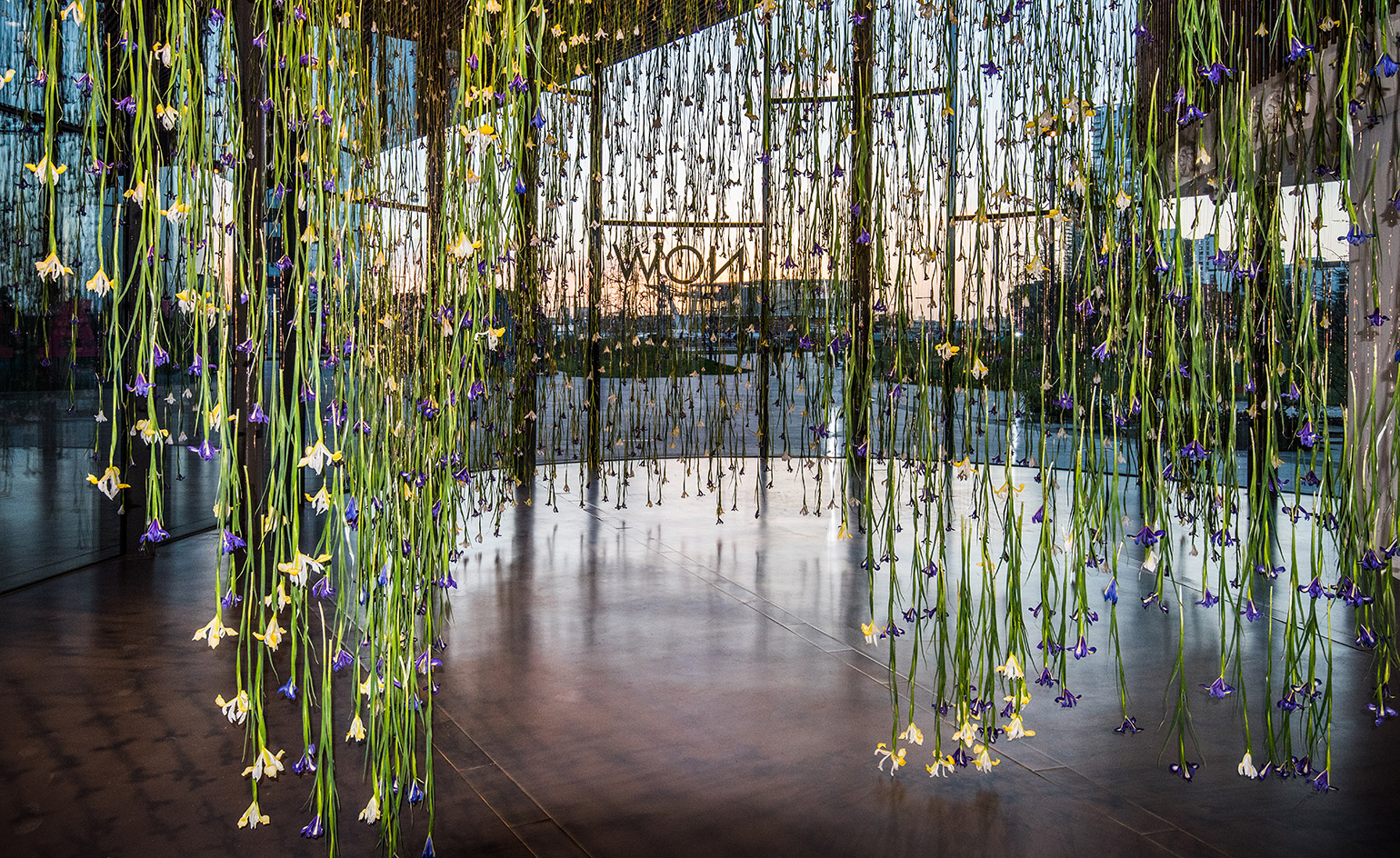 Installation view of ‘The Iris’ at Now Gallery

A detailed analysis into marshland plants that thrived in the area was her next port of call. ‘I discovered that the iris grew there,’ she says. ‘I was immediately drawn to it, I love its symbolic properties and the fact that it’s one of the most commonly cultivated flowers in our modern society,’ she adds.

Admittedly, buying a bunch of irises from your local supermarket will never be quite the same after experiencing Law’s spectacular artwork, which sees 10,000 fresh styles hand-threaded with copper wire and suspended from the gallery’s modernist atrium. ‘I wanted to create this ebb and flow of irises from floor to ceiling,’ she reveals. ‘There will be natural pathways, but the idea is that the viewer will feel completely consumed by the design.’

The fresh, peppery aroma emitted throughout adds yet another sensory dimension, as she explains. ‘Initially the scent will be quite powerful, as will the humidity inside the building, but this will fade as the irises dry out.’ While the blooms will decompose over the display’s two-month run, Law’s intention remains unchanged. ‘I hope the exhibition prompts people to revisit the beauty of the incredible iris – and appreciate it.’

10,000 fresh styles hand-threaded with copper wire are suspended from the gallery’s modernist atrium

The artist says: ‘I wanted to create this ebb and flow of irises’

Law’s aim was to create a seasonal work

‘The Iris’ is on view until 7 May. For more information, visit the Now Gallery website