Frieze London 2016 takes a nostalgic turn, as galleries look back to the Nineties

‘Contemporary art is struggling to address real events in the art world right now,’ claimed Gregor Muir, executive director of the ICA, two weeks before Frieze opened. As co-curator of the fair’s talks programme, he chose the theme ‘Borderlands’ in a bid to galvanise this year’s speakers into exploring mental, physical and political boundaries.

Witnessing oversized mens’ trousers, pink plastic, Barbie-style detritus and sculptures made of scaffolding tubes, Muir’s words resonate. There are always lots of gimmicks at Frieze, but there’s good stuff too and Universal Design Studio – the fair’s architects – and the galleries, have gone to great lengths to make this year’s fair navigable and exciting. At the Modern Institute, recycled corrugated panels from Glasgow’s Tramshed are used by artist Martin Boyce as effective backdrops, while Hauser & Wirth tapped into the vogue for recreating the artist’s studio with a chaotic, fictional space filled with works by 46 practitioners. 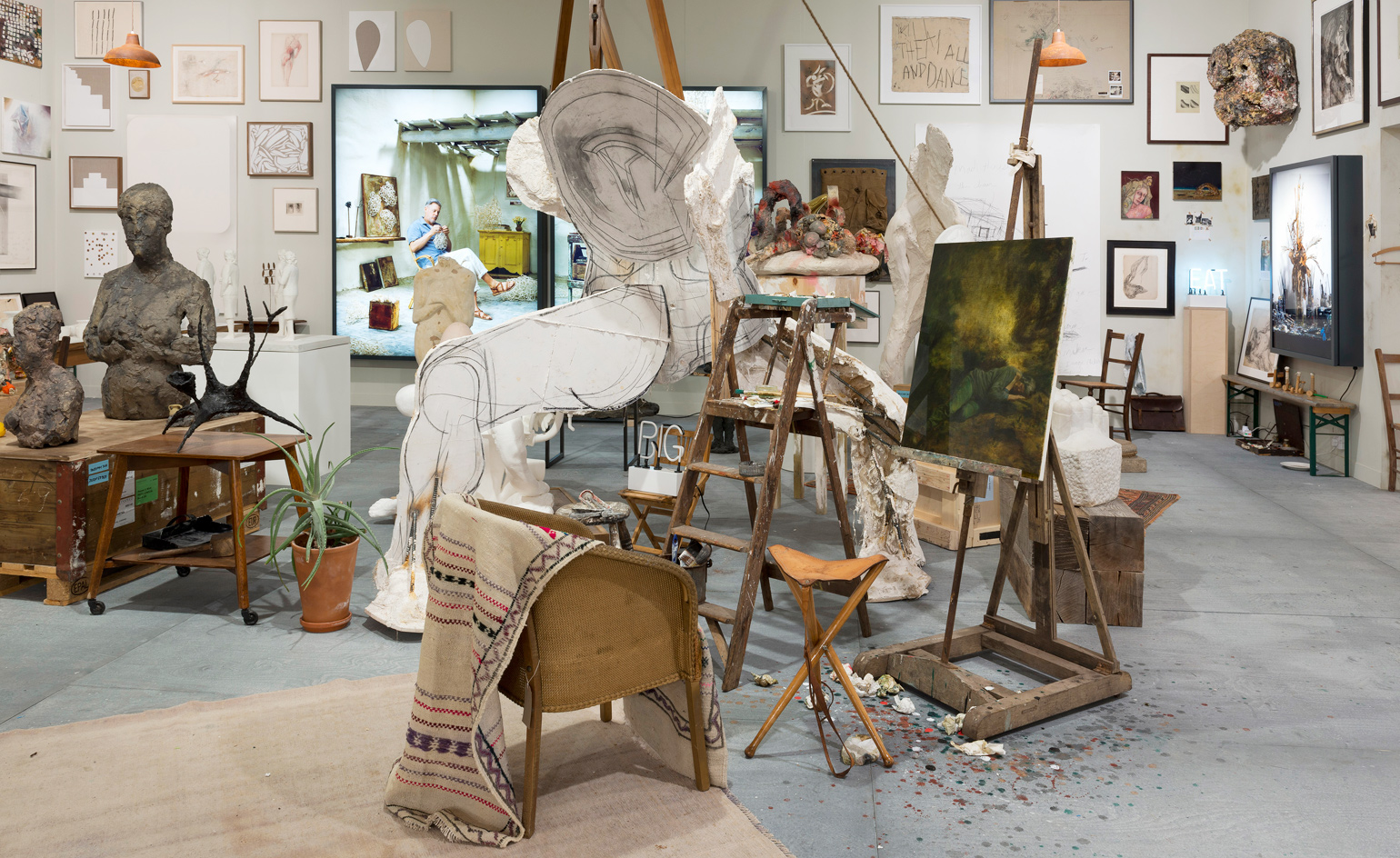 Applied arts headlined at Gagosian in the form of black and white ceramics by Edmund De Waal and at the Viennese Galerie Meyer Kainer artist Lucy McKenzie created furniture wrapped in oil canvases inspired by Ettore Sottsass and Memphis, and Adolf Loos. At Mother’s Tankstation, this year’s Frieze Artist Award winner, Yuri Pattison, evoked 1970s California with an installation that explores the workspace and communal campuses.

For the first time, Frieze looks back this year, to the 1990s. Fourteen galleries revisit seminal shows from what was an impactful decade. Galerie Buchholz has recreated the bookshop in Cologne where Wolfgang Tillmans first showed photographs pinned to the walls, while Thomas Dane’s focus is on Michael Landy’s exhibitions in warehouse spaces 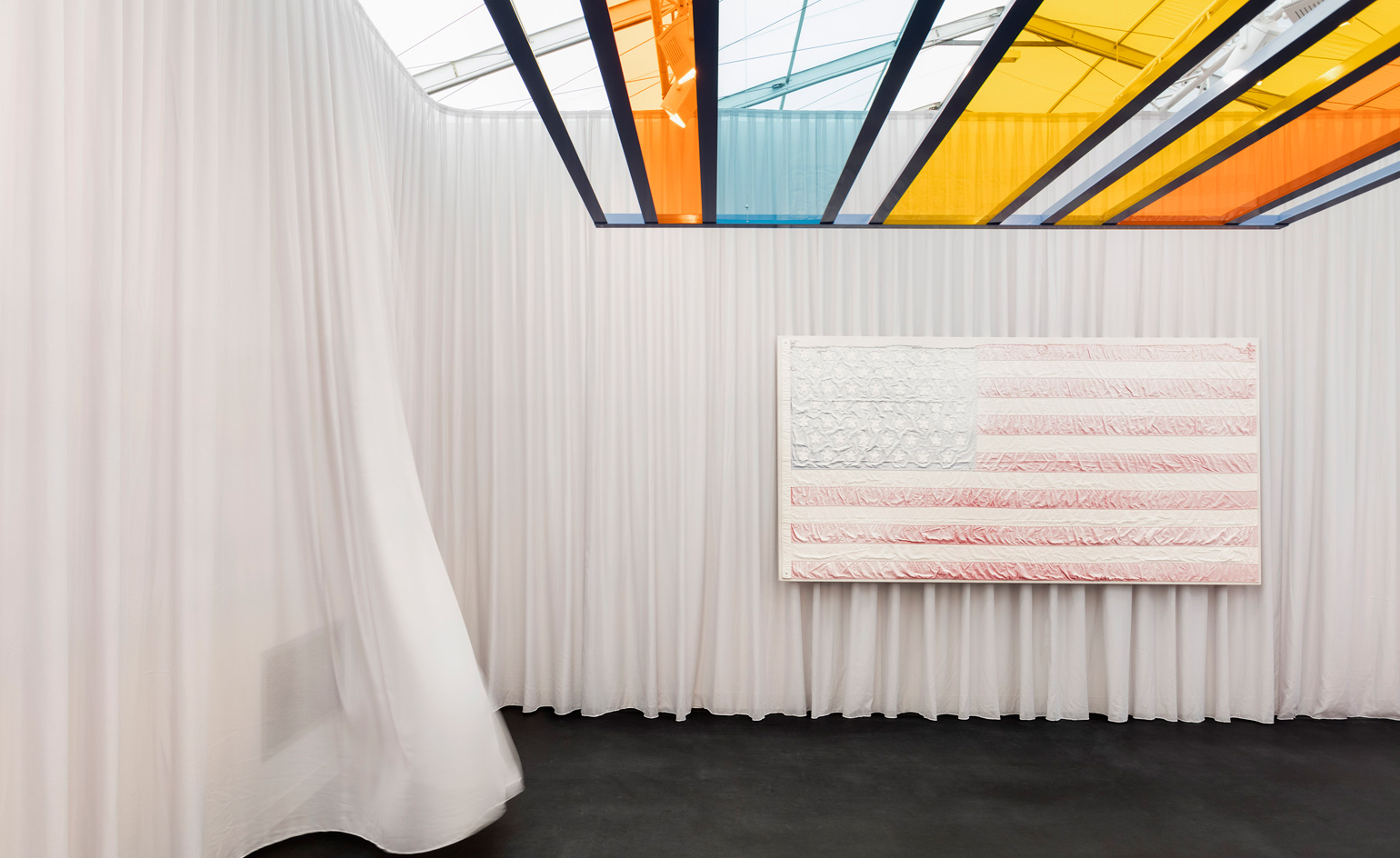 German gallery Rüdiger Schöttle also looks back, to 1926 and the International Institute on Intellectual Cooperation, an advisory body that acted to unite a fragmented Europe (and of which Albert Einstein and Marie Curie were members). Visitors are encouraged to take a seat at a concrete table and discuss the pressing issues of the day. The first session was full – Muir might just be proved wrong.

Installation view of Blank Invitations, by Neha Choksi, 2016 at Mumbai gallery Project 88. Courtesy of Project 88 and the artist

Applied arts headlined at Gagosian in the form of black and white ceramics by Edmund De Waal. Photography: Linda Nylind. Courtesy of Frieze

Hauser & Wirth have gone for the more is more approach with its ‘L’atelier d’artistes’ stand, a tongue-in-cheek examination of the museological practice of reconstructing artist studios. The presentation, with its clumsily translated French title, is an exercise in cliché. Courtesy of the artists, estates and Hauser & Wirth. Photography: Ken Adlard

It brings together the work of numerous artists under the guise of a single artist’s atelier, including Louise Bourgeois, Richard Jackson, Martin Creed and Paul McCarthy. Courtesy of the artists, estates and Hauser & Wirth. Photography: Ken Adlard

Installation view at 303 Gallery. Pictured, from left: Hypothetisches Gebilde, by Alicja Kwade, 2016; Hot Mess: Aperture series, by Doug Aitken, 2016; The Bricks (A.), by Collier Schorr, 2013; and Your Head In My Eyes, by Eva Rothschild, 2015. Photography: Linda Nylind. Courtesy of Frieze

Back of Snowman (pictured in foreground), by Gary Hume 2016 on view at the Sprüth Magers booth. Courtesy of the artist and Sprüth Magers. Photography: Linda Nylind. Courtesy of Frieze

Installation view of the Pace booth. Courtesy of Pace Gallery

An ending and a beginning A-2, by Neha Choksi, at Project 88. Courtesy of the artist and Project 88

Elevator To Culturefield, by Ryan Gander, 2016, on view at Esther Schipper. Photography: Andrea Rossetti. Courtesy of the artist and Esther Schipper, Berlin

Self Portrait as The Opium Smoker (A Midsummer Night’s Dream), by Raqib Shaw, 2016, at the White Cube booth. Photography: Ben Westoby. Courtesy of White Cube

German gallery Rüdiger Schöttle looks back to 1926 and the International Institute on Intellectual Cooperation, an advisory body that acted to unite a fragmented Europe. Visitors are encouraged to take a seat at a concrete table and discuss the pressing issues of the day. Copyright Sebastiano Pellion di Persano. Courtesy of Galerie Rüdiger Schöttle

Installed in the 1990s section of Frieze, Sylvie Fleury’s pioneering work A Journey to Fitness or How to Lose 30 Pounds In Under Three Weeks is being presented collaboratively by Mehdi Chouakri, Salon 94, and Sprüth Magers. The installation was first shown in Aperto 1993 at the Venice Biennale. Courtesy of Sprüth Magers

Frieze London runs from 6 until 9 October. For more information, visit the Frieze website