Hollwich Kushner and KSS have unveiled their latest project, the Pennovation Center in Philadelphia, which is due to open officially next month

The ever-expanding University of Pennsylvania is reaching south across Philadelphia’s Schuylkill River to a new 23-acre development known as Pennovation Works, which will contain a combination of advanced offices, labs and production spaces on the site of a former DuPont research facility. The hub of the area – which officially opens next month – will be the Pennovation Center, a 58,000 sq ft innovation centre and tech business incubator that contains many of these uses in one place.

Built into a three-storey concrete and brick industrial building on the site’s northern edge, Pennovation Center, designed by Hollwich Kushner and KSS, fronts a boldly patterned black on white plaza. The design team painted the building’s concrete frame bright white, creating a powerfully gridded backdrop, along with an A-shaped entryway. On the structure’s far side they added a crystalline glass and steel addition – which initially grew out of triangular, pitched steel bleacher – that looks toward the rest of the Penn campus. The echoing spiky façade becomes an instant signpost for the building, says Matthias Hollwich, principal at Hollwich Kushner. 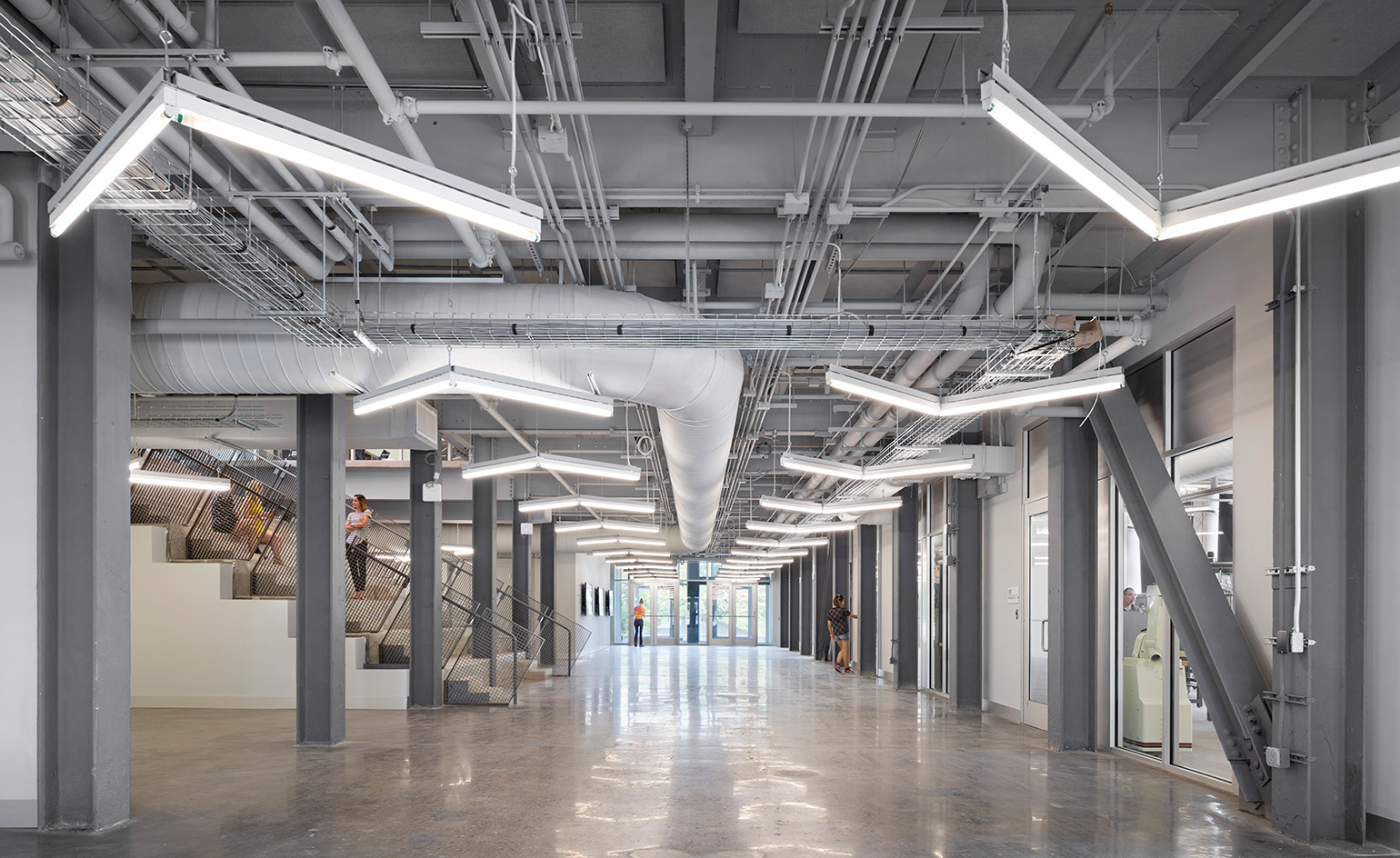 Inside, the facility is filled with labs, open work stations, test and research facilities and startup garages

’Architecture has incredible power when you use it as a communication device,’ he says. ’It’s bigger than any billboard.’ But just in case, the the building also has an impressive illuminated red sign projecting from its east façade.

Inside, the facility is filled with labs, open work stations, test and research facilities and startup garages (enclosed, in fact, with glass garage doors). Open halls – which never dead-end – and lots of glazing encourage connections between workers, keeping them from sequestering themselves away. The centrepiece is a two-storey concrete bleacher, around which extend raw, simple spaces that emphasise the building’s structure, including giant ducts, metallic conduits, and an exposed steel and concrete frame.

’It’s more of a machine than an office building,’ says Hollwich, appropriate for a space meant for tinkering and creating. Furthermore the lack of preciousness (all lit by rhythmically-hung exposed fluorescents) allows users to drill holes in walls or move machines around without worrying.

The building is part of the University of Pennsylvania campus and will contain advanced offices, labs and production spaces

An innovation center and tech business incubator, the project is built into an existing three-story concrete and brick industrial building, which was renovated and extended

The team added a crystalline glass and steel addition

Communal areas and plenty of glazing encourage connections between workers