Ahead of the Design Museum opening, we look back at the site’s transformation

As the Design Museum gears up for its November opening, a new design-led neighbourhood emerges on its West London site, courtesy of OMA with Allies and Morrison, and John Pawson. Photography: Nick Gutteridge

In 2008, in the context of an international competition, OMA came up with a clever plan to help preserve the former Commonwealth Institute on High Street Kensington, designed by Robert Matthew, Johnson-Marshall & Partners and completed in 1962. While the building was listed since 1988, it had been empty since 2002 and in urgent need of repurposing.

Enter Holland Green, an apartment complex of three residential blocks that surround the existing structure, now set to become the new Design Museum, come 24 November. This residential element would enrich the site and help support and fund the preservation and redesign of the existing, iconic building on site. The architectural team behind the area’s transformation is OMA with Allies and Morrison (who joined the project in 2011), and John Pawson. OMA with A&M worked tirelessly on the masterplanning, as well as the residential scheme’s interiors and the core and shell preparation of the museum’s building. Pawson took over the baton in July 2015 to further perfect the former Institute’s interiors and work on the overall building’s redesign into a world-class museum. 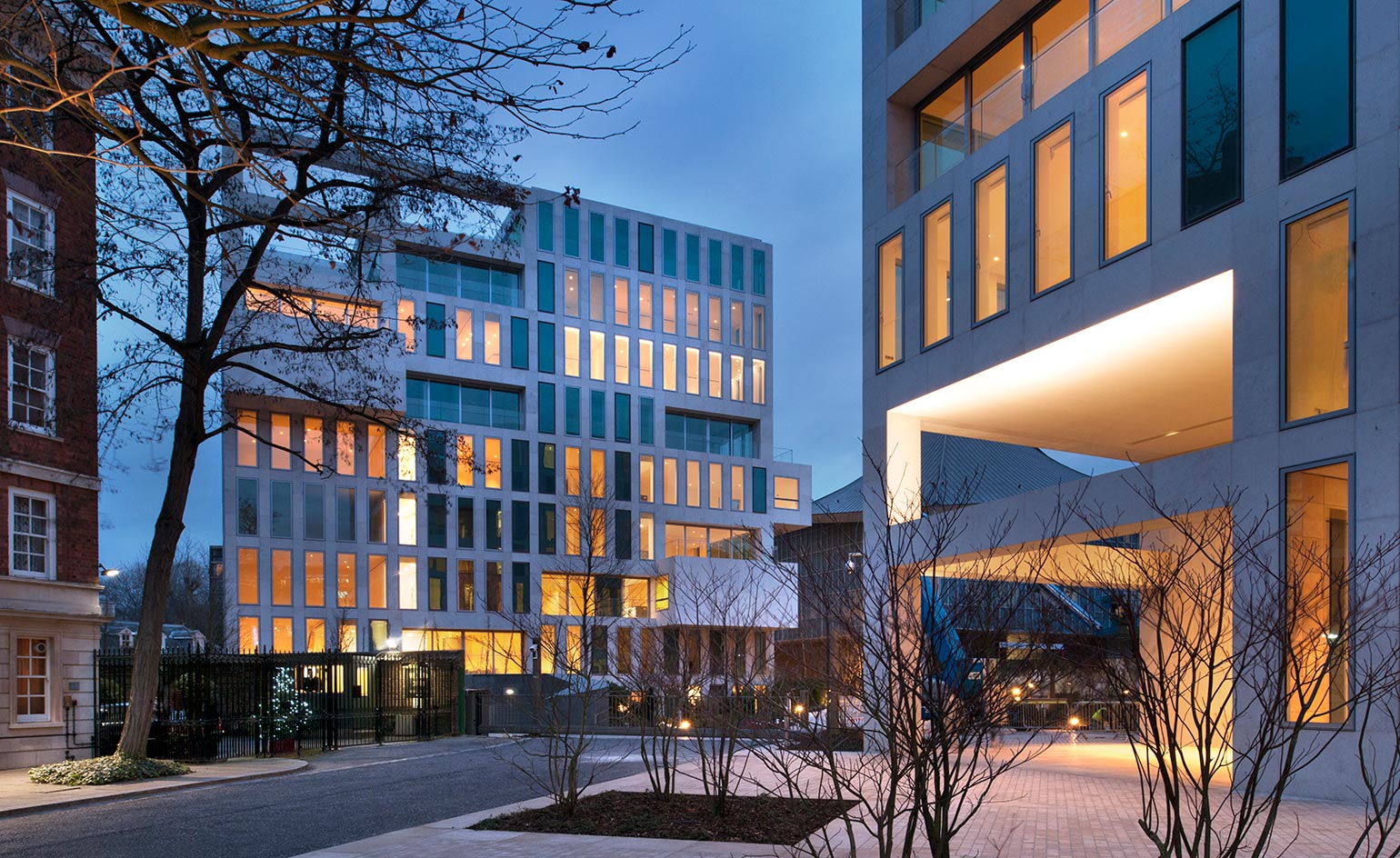 The site’s transformation is fascinating – the result of a multi-level collaboration between some of the world’s leading international practices Photography: Philip Vile

OMA with Allies and Morrison took out the former Commonwealth building’s floors, creating a series of voids that allowed breathing space for the new use, making it fit to accommodate the needs of a museum. Its façades were completely replaced with energy-efficient fritted ones (designed to resemble the originals), and a new basement was added for car parking, storage space and service access, leaving only the structure’s iconic hyperbolic paraboloid roof and its supporting structure original (and carefully restored).

At the same time, Holland Green and its three volumes were arranged and scaled proportionately around the existing structure, in response to the immediate surroundings. Calm, orthogonal geometries were chosen for the residential architecture; the aim was not to compete with the museum’s famously curvaceous roof, but rather to highlight it through subtle contrast. Rows of openings and box-like protrusions add plasticity to the complex.

OMA partner Reinier de Graaf led the project, with the help of London office director Carol Patterson. ’The residential blocks give the historical building a new setting,’ he says. ’Their calm, orthogonal geometries pose a deliberate contrast to the dramatic hyperbolic geometries of the exhibition hall’s roof, registering the amplitude of its curvature like graph paper. The residential buildings sit as freestanding objects within the park landscape. Oriented to align with the exhibition hall, they aim to integrate the hall into an ensemble of buildings.’

The new Design Museum site’s transformation is fascinating; the result of a multi-level collaboration between some of the world’s leading international practices. Explore photographer Koto Bolofo’s own look (W* 211) at this captivating transition, and look out for our forthcoming December issue (W* 213) for more on the completed building.

OMA with Allies and Morrison worked on the site since 2008 and 2011 respectively: first on the site’s masterplan, then with the shell and core of the former Commonwealth Institute building, and finally on the three Holland Green apartment buildings. Photography: Philip Vile

The Holland Green complex was completed earlier this year and most units are now occupied. Photography: Sebastian Van Damme

The team worked on the overall architectural work on the museum’s shell until July 2015, at which point John Pawson took over to craft the elegant new interiors. Photography: Philip Vile

OMA with Allies and Morrison cut open floorplates to accomodate the needs of a museum, replaced the dated façades with energy efficient ones, and adding a service basement. Photography: Philip Vile

The site’s transformation is fascinating – the result of a multi-level collaboration between some of the world’s leading international practices Photography: Philip Vile