Letter from Seoul: the projects bringing a new slant to the Korean capital

Darak Darak, The_System Lab, 2017: This family home is also a commercial enterprise, including offices, studio space and a cafe run by the client’s wife. The two-storey home sits on top of the whole four-storey building, designed by The_System Lab to be financially self-sustaining. Photography: Yong Kwan Kim

Can you read a city by its skyline? Seoul’s story would certainly be a page turner, an architectural rollercoaster ride from sleek commercial skyscrapers and blocky concept stores in Gangnam, to traditional hanoks in the north and a low-lying industrial factory district in the south, to soaring residential towers in the suburbs.

Fascinated by the diverse urban palette, architects come to Seoul to play – here, they can build their dreams, because anything fits. Audacious buildings conceived in moments of passion such as Rafael Viñoly Architects’ Jongno Tower (1999), the Seoul City Hall by iArc Architects (2013) and Zaha Hadid’s Dongdaemun Park Spaceship (2014) were all born in Seoul. 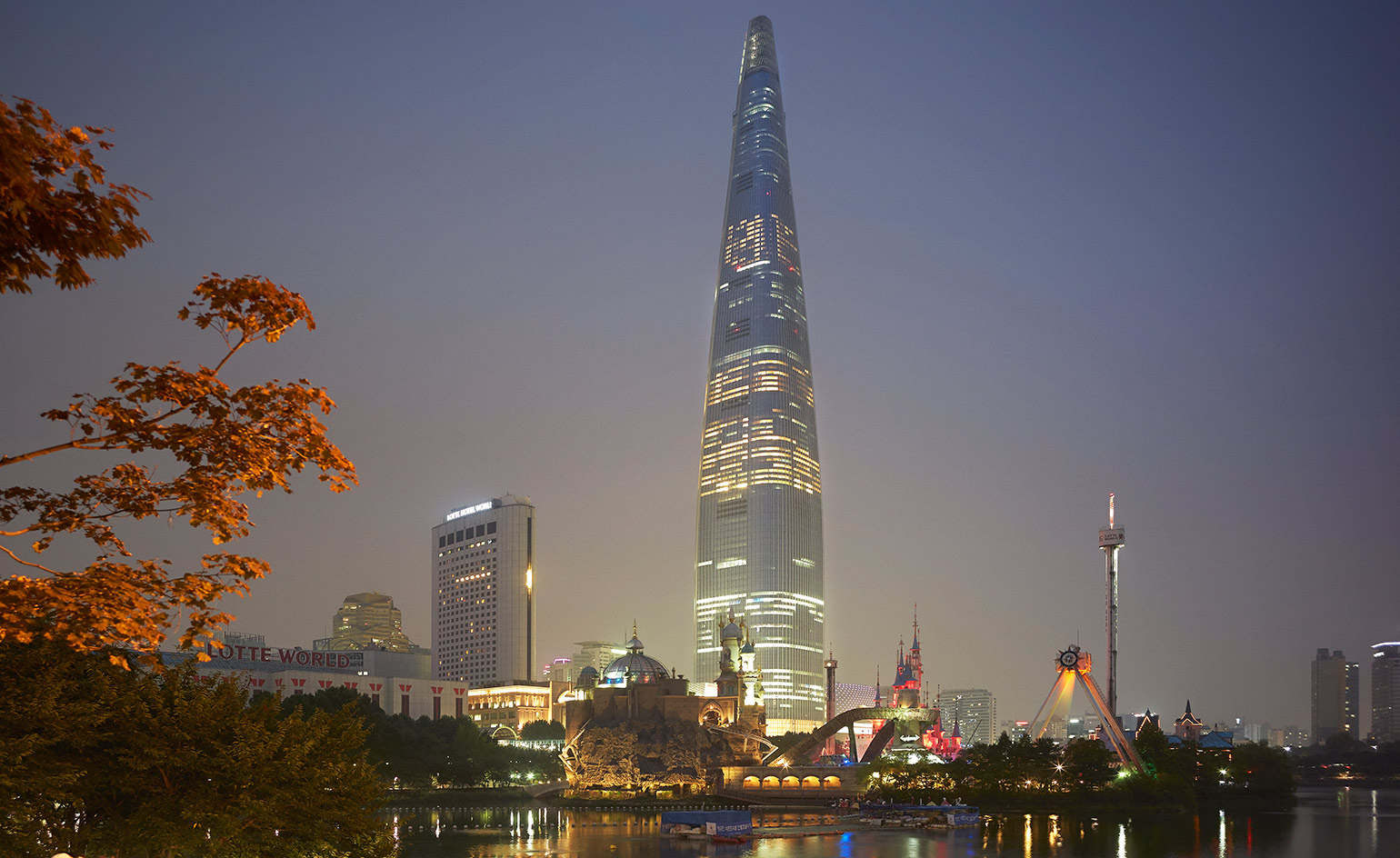 Lotte World Tower, Kohn Pedersen Fox Associates, 2016. The design was inspired by traditional Korean material culture, such as the shapes of ceramics, porcelain and calligraphy. In an ode to Seoul’s urban evolution, a ‘seam’ runs from the top to the bottom of the tower, pointing towards the old city centre

Seoul is a truly modern city, a product of the late 20th century. It wasn’t until the late 1960s, a good decade after the end of the Korean war, that South Korea started to prosper economically. During the 1970s, key infrastructure was laid down; this included the Seoul Metro, now one of the largest and most advanced subways in the world, and bridges across the Han river linking the quiet Gangnam district to the rest of the city.

Twenty years of building ensued with enthusiasm, the population rising and density growing until a 21st century crack down. In 2008, the government hit pause and laid down strict planning regulations on floor-to-area ratios (FAR) in an attempt to control hyperdensity, restricting the reverie of architects and developers city-wide. 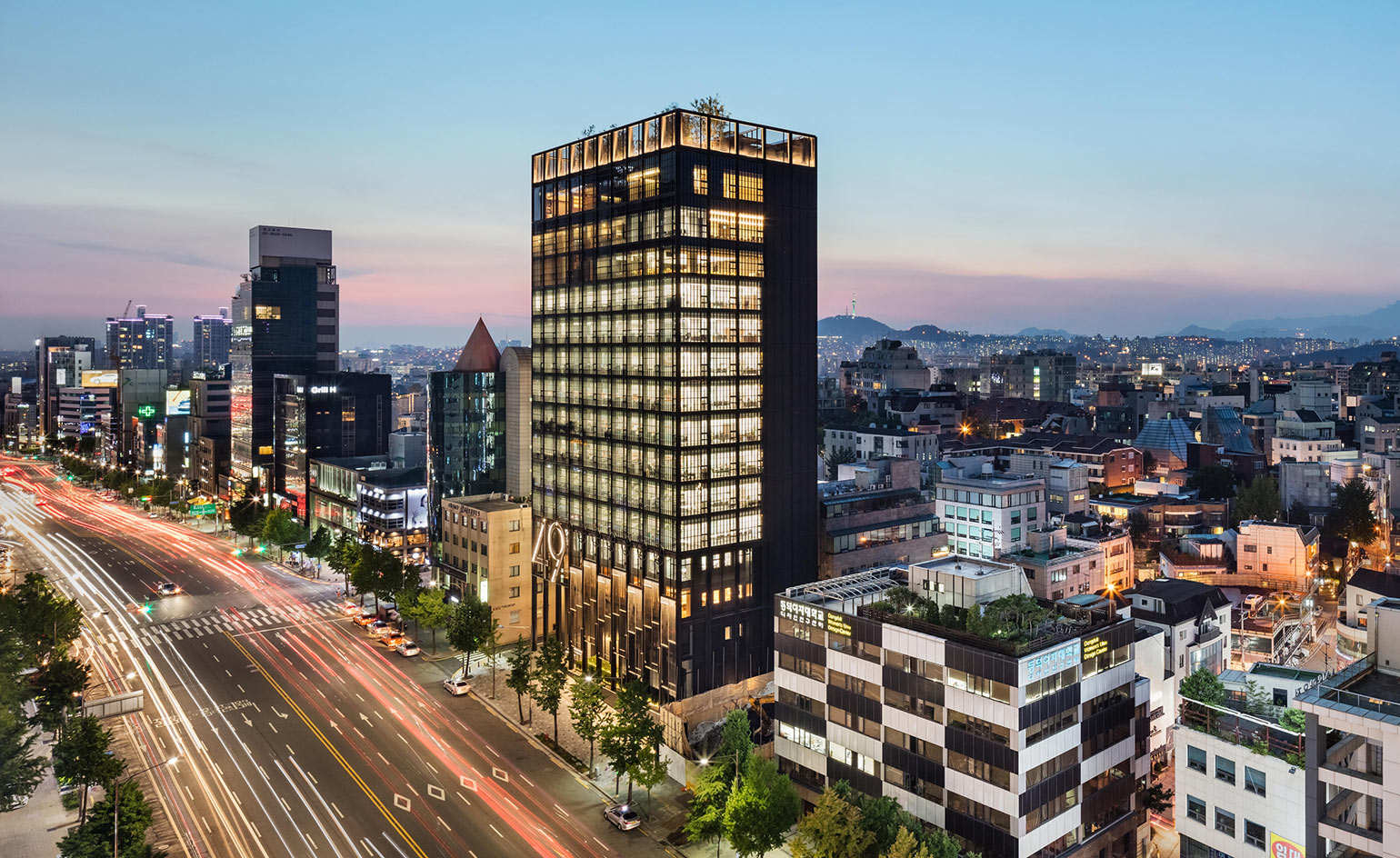 Shinsegae International, Olson Kundig, 2015. The 15-storey building is a flagship for the brand, containing offices, design studios, a ground floor retail space and restaurant, as well as a rooftop garden

Yet, what better than a challenge? Architects have become accustomed to pushing the limits of floor plans, materials and even gravity to meet the challenges of building in Seoul. At the 15th Venice Architecture Biennale in 2016, the South Korean pavilion, titled ‘The FAR Game: Constraints Sparking Creativity’, examined the phenomenon.

FAR limits in Seoul vary from 100 to 1,000 per cent, and in green belt areas drop to 50 per cent. Commercial buildings are allowed the highest FAR of 1,000 per cent maximum. It’s worth noting that this drops to 800 per cent when building within the Four Gates, the central, historic area of the city (Article 55 of the Seoul Metropolitan Government Ordinance on Urban Planning 208). 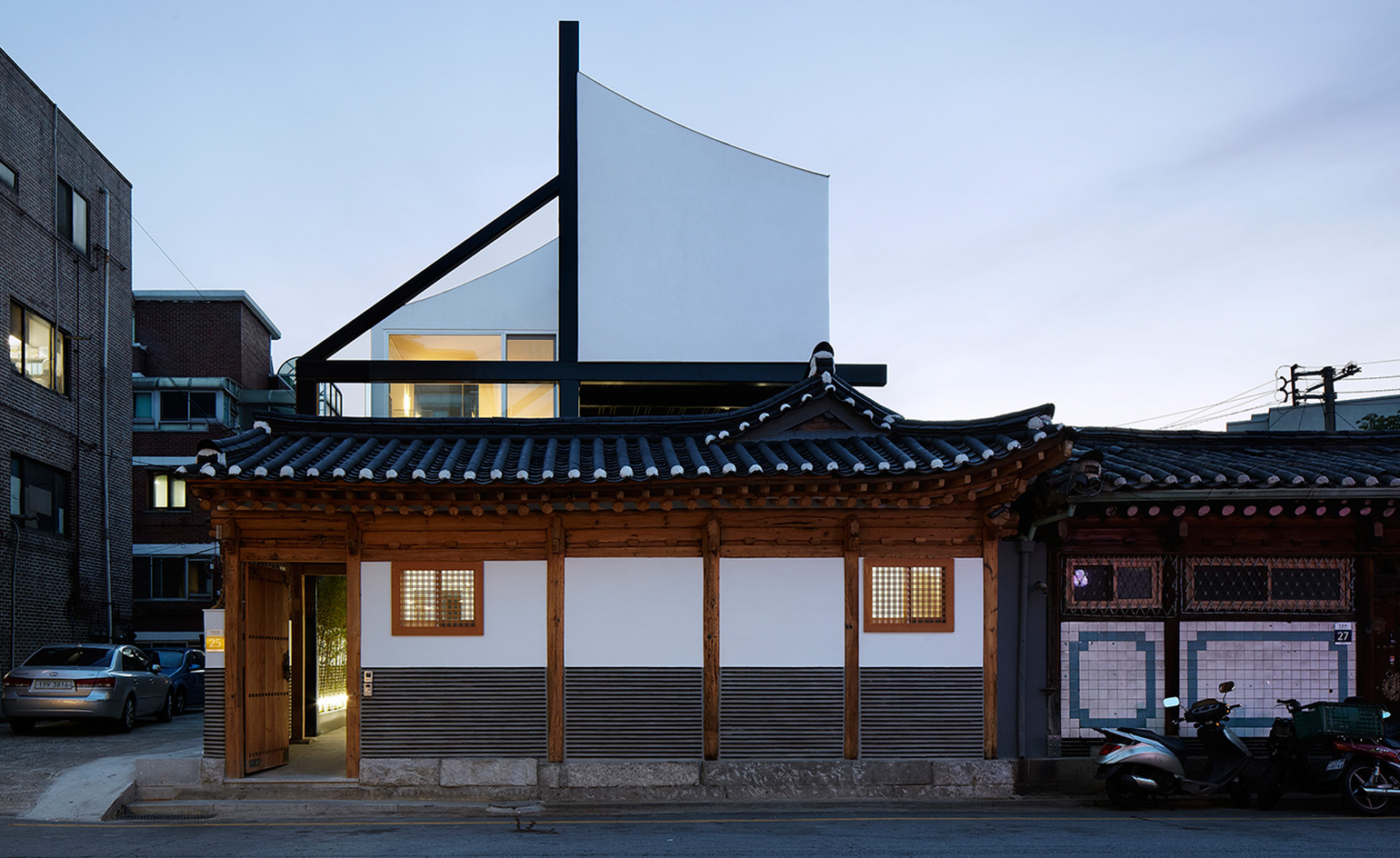 In the past two years, as well as working within the FAR conditions, architects have become more conscious of their long-term contributions to the skyline. In recent years, closer attention has been paid to shape and materiality – as seen in Olson Kundig’s steel-grid-clad facade of the Shinsegae headquarters and the red brick exterior of the new Won & Won 63.5 by Doojin Hwang Architects providing respite from grey concrete monoliths.

FAR ratios for residential buildings vary in location across the city, from 100 to 250 per cent, in combination with other planning rules which accompany tricky inner city sites. The Darak Darak building by The_System Lab is an example of how architects are playing, and winning, at the game of FAR. A residential building for a family, with office and studio space below for the owners to rent out was built with a diagonal exterior wall skirting past restrictions of the densely surrounded site. Terrace balconies, not included in the FAR, were designed to extend living space and gabling the roof allowed for attic storage space, not included in the FAR. The list goes on. 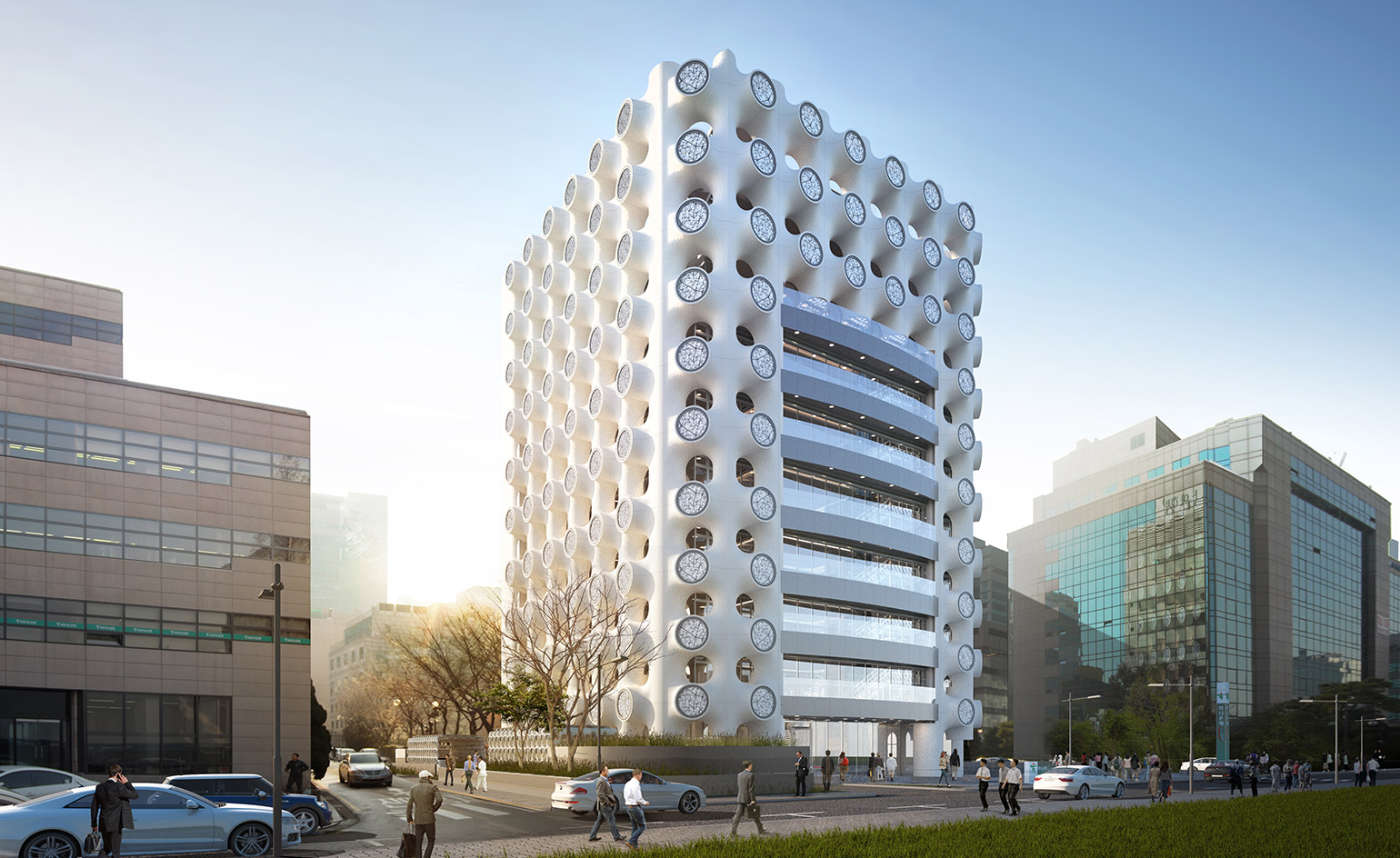 Residential housing in Seoul was not always so space efficient. The traditional hanok, a single-storey house made of stone and timber with chunky gabled roofs and wide courtyards, can be found in certain areas of the city such as the Bukchon Hanok village and defies all the rules of space efficiency. In 2001, a hanok preservation plan was passed to protect the remaining hanoks across the city, yet, due to the cost of preservation – often more money than a plot is worth – developers either avoid them or find ways to demolish them.

Valiantly, CoRe architects found a way to preserve an old hanok and build a modern space-efficient house, designing a cantilevered steel frame to float a new structure above the old, bypassing the hanok, which they restored to glory. While the site, with 50 per cent FAR, was a limitation, the architects say that it was the only thing that saved the shabby hanok because ‘it was a complicated site that no one wanted to touch’. 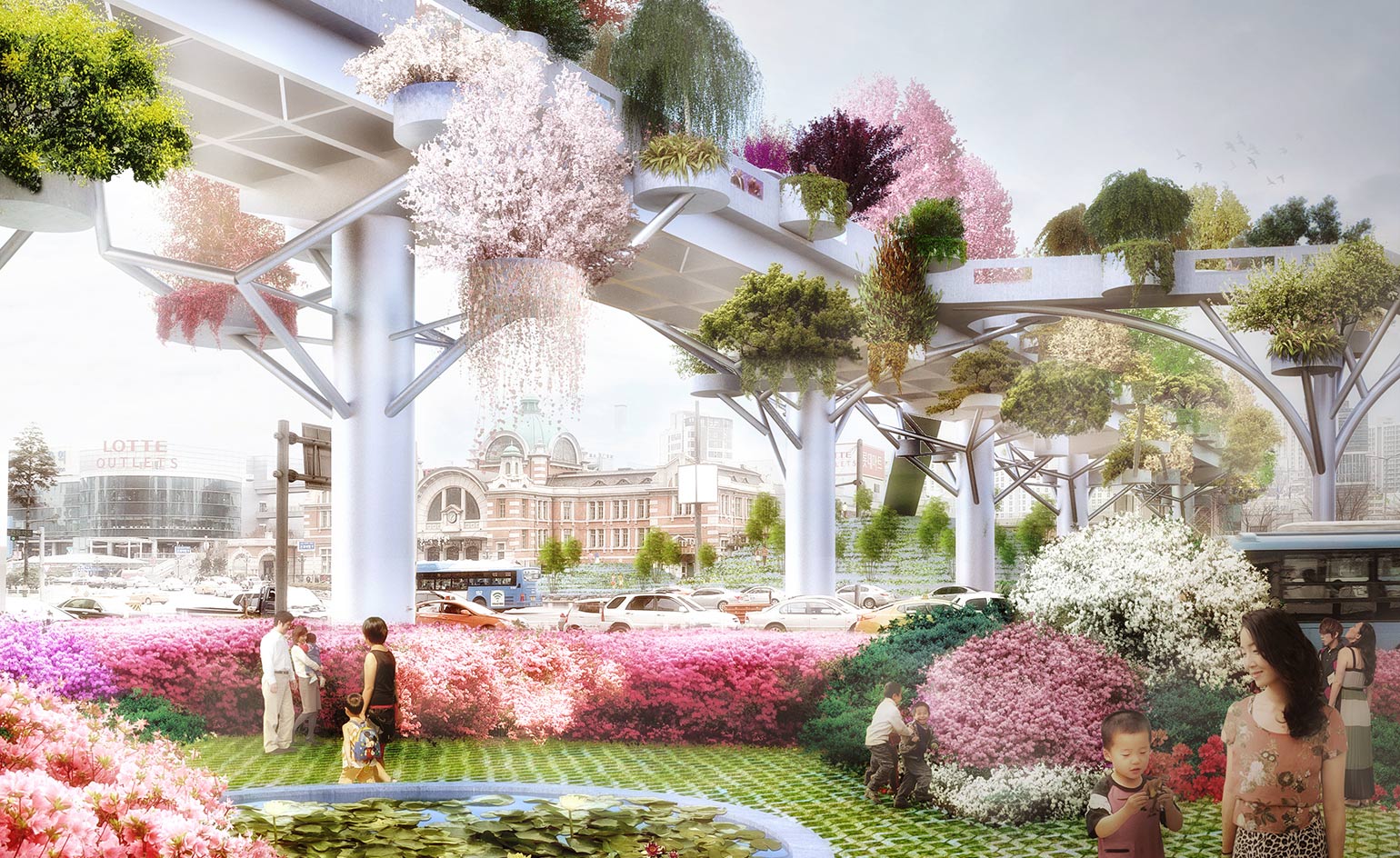 A city like Seoul is always on the move. New projects opening this year include the KEB Hana Bank Landmark Tower by The_System Lab and the Seoul Skygarden by MVRDV (Seoul’s version of the Manhattan High Line). The inaugural edition of the Seoul Biennale of Architecture and Urbanism will launch in September 2017 with the theme of ‘Seoul as a city of humanity – Making a human-centered city’. There’ll certainly be plenty to talk about.

Darak Darak, The_System Lab, 2017: Located in the architecturally-crowded area of Songpa, this house is built on a 200 sq m site and constructed in concrete, with a sleek protective steel facade. The diagonal edge passes smoothly through planning restrictions, allowing the building to make the most of its limited site. Photography: Yong Kwan Kim

Hyundai Card Headquarters 3, One O One, 2016: While the facade is blocky and modern, the architects transformed the interior, opening up the building to light through double-height spaces and rearranging walls with a new plaster finish

Shinsegae International, Olson Kundig, 2015: Luxury clothing brand Shinsegae’s HQ, designed by Olson Kundig, is an iconic addition to Gangnam. The gridded facade is inspired by woven material and features seven steel wheels eight feet in diameter, which open and close a series of steel panels to regulate light and shade

Nonhyeon 101-1, Stocker Lee Architetti, 2016: Built on the site of a demolished building, this new four-storey office and apartment building in Gangnam has a concrete ground floor which holds a cafe slightly sunken below street level. Photography: Simone Bossi

Nonhyeon 101-1, Stocker Lee Architetti, 2016: The architects looked to bring a new style, texture and colour to the area through the building. The upper levels, built in red brick, cantilever over the footprint, creating a sheltered entranceway for the offices and apartments above. Photography: Simone Bossi

Won & Won 63.5, Doojin Hwang Architects, 2015: The Gangnam-based commercial office building Won & Won 63.5 – which is 63.5m high – is constructed of brick and glass. The surprising choice of material for this high-rise adds variety and softness to the skyline

Won & Won 63.5, Doojin Hwang Architects, 2015: The architects see the aesthetic of the bricks as ‘pixels’ which reduce in the middle of the building to open up gaps and serve as railings to balconies. A C-shaped roof garden is shaped like the courtyard of a hanok

Lotte World Tower, Kohn Pedersen Fox Associates, 2016: At 123 storeys and 555m high, this building is in the world’s top-ten tallest and is South Korea’s highest. The softly tapering form, with curved summit, encompasses a variety of facets under its sleek facade, from offices, to a hotel, retail space and a public observation deck

House of Dior Boutique, Christian de Portzamparc and Peter Marino, 2015: Reflecting the flowing drapery of couture fabric, the iconic facade of this Dior boutique is made from resin and fiberglass imprinted with the Dior cannage motif. The interiors were designed by Peter Marino, inspired by the iconic Avenue Montaigne Dior flagship. Photography: Nicolas Borel

Givenchy HQ, Piuarch, 2015: The skin of the facade is made of electropolished steel plates with irregular holes, which reflect the changing light levels of the city. Piuarch wanted to create a dynamic and artistic building that would respond to the environment. Photography: Shin Kyung Sub

Platform-L Contemporary Art Center, Jeonghoon Lee of JOHO Architecture, 2016: A cultural offshoot of the Louis Quatorze fashion brand, this art gallery and event space is built in two volumes with a central courtyard and underground Live Hall for performances and large audiences, really making the most of its site, surrounded by streets on three sides. Photography: Namgoong Sun for Platform-L Contemporary Art Center

KEB Hana Bank Landmark Tower, The_System Lab, 2017: Scheduled to complete in May 2017, this tower will integrate several major branches of KEB Hana Bank, Korea’s largest banking group, into one building, reflecting the move to online banking for many customers. The evolving facade of three-dimensional round cells will be an attraction for visitors

Lie Sangbong Tower, Unsangdong Architects, 2017: Commissioned by Lie Sangbong, a leading fashion designer, the tower sees a combination of contemporary and East Asian aesthetics, designed to be a porthole which connects the city to nature