California dreaming: Summitridge makes the most of LA’s temperate climate

Los Angeles-based architects Marmol Radziner have just unveiled a new private house in Beverly Hills; Summitridge sits on a steep slope and makes the most of the region’s temperate climate

Californian architects have long been blessed by an abundance of natural light and a dry temperate weather, which explains the airy expansiveness of so much of the state’s best architecture. And when a half-decent budget is thrown into the mix, the results can be both inspiring and aspirational.

In every way, the Los Angeles-based Marmol Radziner were the ideal architects for the Summitridge residence. The site, a steep slope that rises over downtown LA with views of Century City, the Getty Center and the ocean to the west, perfectly suited the firm’s penchant for interlocking volumes.

Ron Radziner says the client, an independent art collector, ‘wanted a modern home where every bedroom and living space has a view of garden roofs and the city beyond. They wanted the design to accommodate their grown children on the first and second guest floors when they would visit, and the master suite on the fourth, with the main living area in between. They envisioned indoor-outdoor living with an emphasis on exterior dining and entertaining against a natural colour and material palette.’ 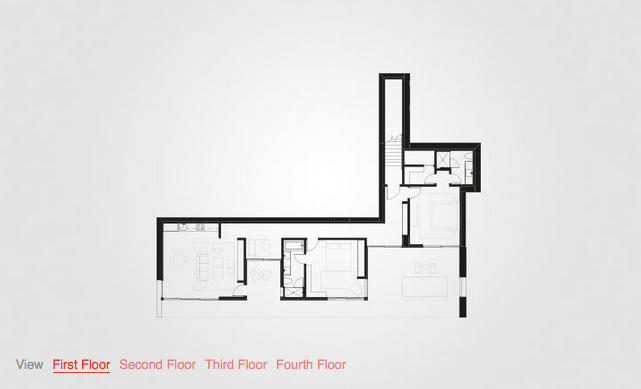 Take an interactive tour of Summitridge

Radziner solved the tricky issue of the site by terracing into the actual rock a series of interlocking boxes, including a 54 ft saltwater infinity pool, with alternating north-south and east-west orientations. Zinc panels and bronze finishes differentiate the masses, while dry-stack stone and cement plaster add a rough-hewn warmth to the spacious proportions of the house.

‘The material and colour combinations on the façade, together with the terraced volumes and planted roofs, allow the structure to recede into the hillside,’ Radziner says, though, if it’s not already abundantly clear, Summitridge stands out in every other way.

Designed as a series of interlocking volumes, the composition features lots of outside space, including a pool area at the rear of the property

The owners asked for a home with views from every room, as well as a design that could accomodate their grown children when they visit

Timber and stone inside complement the zinc, bronze, dry-stack stone and cement plaster outside

The children’s bedrooms sit on the first and second guest floors, and the master suite is situated on the fourth

By terracing into the actual rock, the architects solved the site’s tricky slope, while framing the striking views as per the owners’ specification