Top of the class: a creative hub in a former London school is a lesson in sensitivity

The height of the Grade II-listed building, formerly Nichol Street infant school, was raised by 1.2m

A campus-like feel of open, multifunctional space can be created in pretty much any new container in any location (OMA’s massive hangar for G-Star Raw on an Amsterdam ring road springs to mind, see W*180). Carving the same kind of space out of an existing building is more of a challenge. Club Row is an extension of Rochelle School in Shoreditch, London, a cluster of Victorian buildings that house creative tenants such as designer Katie Hillier, textile studio Mr Grieves, production company North Six and design agency YES, with the acclaimed Rochelle Canteen located in the school’s former bike sheds.

Architect Laurence Quinn, whose firm has a studio in the building, has overseen many of the interventions that have transformed the site. ‘Seven years ago we added the Frieze project on the roof,’ Quinn says, describing the construction of four linked pavilions for the art magazine, discreetly set back from the parapet on the old rooftop playground space. The latest addition builds on the community that has evolved at the school over the years. ‘It’s a successful ecology – everyone wins,’ Quinn says of Rochelle’s house culture, cultivated by the site’s owner, James Moores, since the genesis of the project back in the late 1990s. ‘He picked businesses that complemented one another,’ the architect adds. ‘It was a curatorial approach.’

The building was originally a school serving the Boundary Estate, one of London’s earliest social housing projects, finished in grand Arts and Crafts style to replace the notorious Old Nichol slums. Rochelle School was a centrepiece, and the extension at Club Row reuses what was originally the adjoining Nichol Street Infant School. Designed by Edward Robert Robson, author of the seminal 1874 book School Architecture, it lay abandoned for many years. 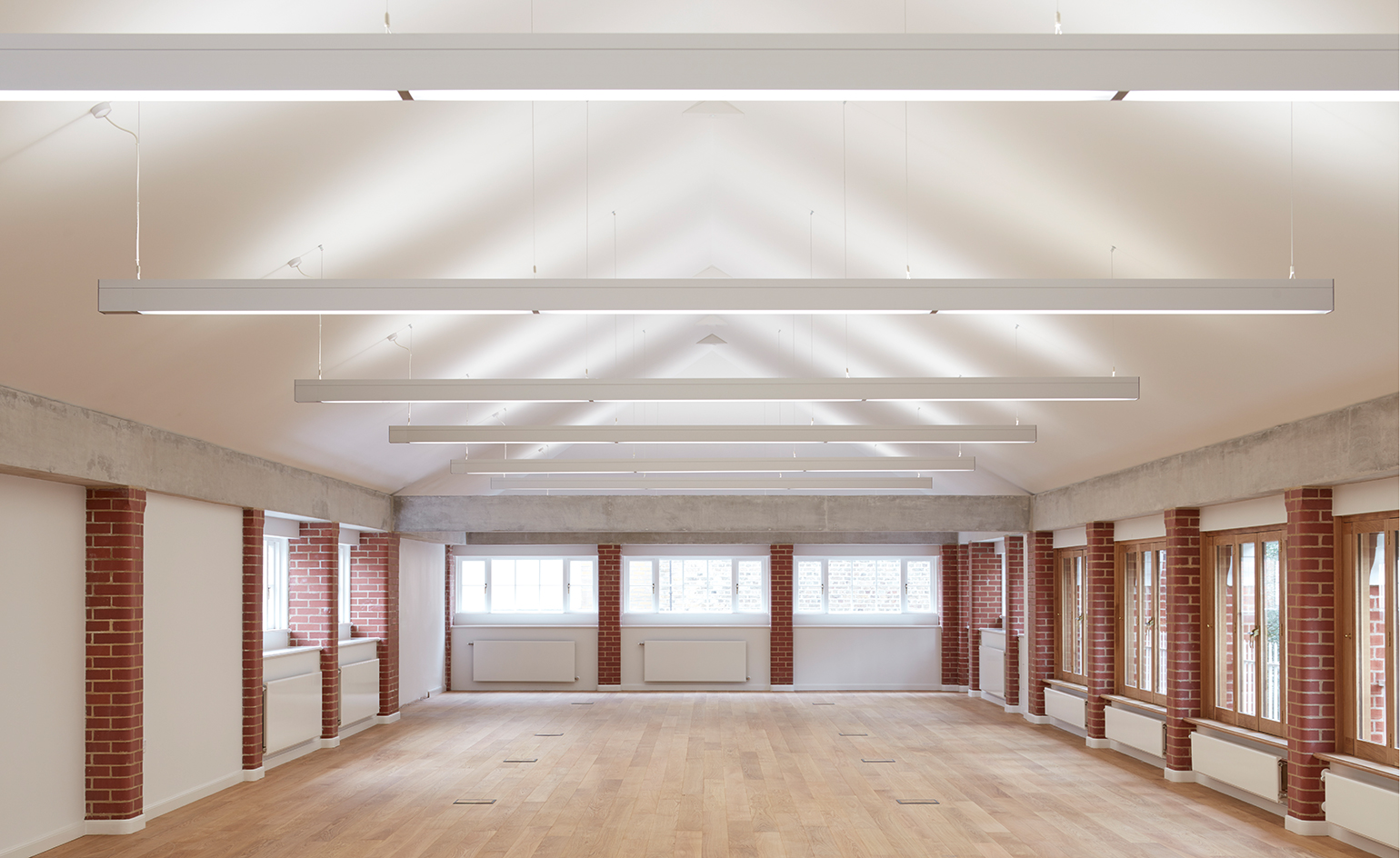 The upper-floor workspace carved out of the old schoolrooms. Photography: Rob Parish

Quinn and his team navigated the Grade II listing to sympathetically raise the height of the existing structure by 1.2m maintaining as much as possible of the large, high volume of the original classrooms on both floors of studios. Two new entrances at ground-floor level are paired with a new staircase, meticulously finished in terrazzo and brass.

‘Our intention was to plug into the building’s architectural eclecticism,’ says Quinn. ‘We used precast concrete and terrazzo, but detailed in a modern way. We wanted to respect its origins.’ The original Columbian pine parquet floor from the 1880s was restored and refinished, while all the contemporary touches have an ‘intense rigour’: the handrail details, the integrated lighting, the zinc-clad roof and the restoration of original iron structural details in the main schoolrooms.

One of the great qualities of the building was the large main hall – it’s what everyone took away,’ the architect says. ‘It was important not to lose that experience.’ The clean, crisp architectural lines, the subtle engineering by Elliott Wood and, above all, the focus on broad spaces and restored materials make it a highly desirable workplace. Quinn points out that, as the original building had to house a couple of hundred children with just a few opening windows, ‘surely it could satisfy a creative space’. As a result, there is no need for intrusive mechanical ventilation systems.

‘The modern touches prepare it for its next journey as a place for creative industries,’ the architect says. The combination of warm original materials, simple white backdrops and generous windows make Club Row an object lesson in transforming the old and forgotten into the new and dynamic.

A new staircase is finished in terrazzo and brass

View from the landing into the upper-floor workspace. Photography: Rob Parish

Global design agency Code and Theory also has its new London outpost in Club Row. The bulk of the fit-out was undertaken by designer Tom Housden and his team at Hand&Eye Studio, and includes elegant shelving and presentation units. Photography: Max Creasy