When you purchase through links on our site, we may earn an affiliate commission. Here’s how it works.

Audiovisual artworks by Ryoichi Kurokawa explore the nature of time and mark the launch of Glenfiddich’s Time Re:Imagined whisky collection

This content is intended for persons above the age of 18 only; Please drink responsibly.
(opens in new tab)
‘Moment’ is key. The notion of discovering the decisive instant, expressing it vividly and artistically, through stillness and motion. This was Osaka-born, Berlin-based audiovisual artist Ryoichi Kurokawa’s elegiac strategy for a new collaboration with Scottish distillery Glenfiddich, creating a series of works as a sensorial celebration of three rare aged Scotch whiskies.

Renowned for his mastery of sound and light, Kurokawa’s three unique artworks blend computer-generated sounds with sampled images of colours, textures and structures from nature, all processed by a customised application. The images mark the release of Glenfiddich’s Time Re:Imagined collection – three single malt Scotch whiskies matured for 30, 40 and 50 years respectively.

Poetic, abstract and deeply rooted in notions of time, the decades-old Scotch whiskies and their corresponding artworks are underpinned by the idea of embodying, with multisensory precision, a single moment in time that can never be repeated. ‘The flow of time in maturing has a great impact on the beauty of the final whisky,’ says Kurokawa of his inspiration.

For the 30-year-old whisky, with its bronze shades and warm honeyed finish, the artist tapped into the notion of time suspended in a single moment; focusing on the sensory spectacle, the artwork features close-ups of petals and warm shades of the Scottish landscape, creating the perfect complement to the whisky’s woody, floral-tinged accents.

For the 40-year-old whisky – a dark mahogany medley of layered flavours, from roasted coffee and chocolate to ripe black cherries and polished leather – the focal point was the idea of cumulative time. The artwork’s gentle fluidity, with endlessly contoured lines, hints at the gradation of mountainous landscapes, while also evoking the layered flavours that evolve during the whisky maturation process.

To encapsulate the spirit of the antique gold-hued 50-year-old whisky, with its lingering sweet finish, Kurokawa embraced the idea of simultaneous time, distilling this rare whisky into the audiovisual equivalent of a single sip containing every moment of the past 50 years.

Wallpaper*:  Your creative dialogue began with a visit to the Glenfiddich distillery at Dufftown in Speyside, in north-east Scotland. How was that experience?

Ryoichi Kurokawa:  Glenfiddich’s history and its production method were explained to me in detail. I was surprised at how rigorously controlled the processes in the traditional production method are, and I was impressed by the high level of professionalism shown by the craftspeople there. The tour and tasting were stimulating for all five senses. For the sense of smell, in particular, it was a very special experience.

RK:  While some of my projects in recent years have involved man-made objects, I mainly create works inspired by nature, so the experience of being at the distillery in rural Scotland and simultaneously being stimulated by a range of different sensations refreshed me mentally and provided a great inspiration to create something new. The beauty of the Scottish countryside, learning about Glenfiddich’s history and production method, sampling a variety of whiskies – their smell, taste, feel, finish – and discovering more about the distilling process that takes many years, all made a deep impression on me. The way in which the craftspeople devoted so much time to their work provided me with a vision of the changing fluidity and motion of cumulative time.


W*:  In the past you have combined state-of-the-art, digitally processed music with ancient and traditional Japanese instruments. What particular processes and tools did you use for this project?

RK:  In this project, the audio is based on computer-generated sounds and patterns. Field-recorded sounds are layered over each other, and these recorded real-world sounds appear as part of a pattern, but this is also basically controlled by a computer. As for the visuals, I sampled natural colours, textures and structures, and then edited these images with a custom application.


W*:  There seems to be a definite parallel with your own creative process and the process of making whisky. Both take time to achieve and both require a combination of craftsmanship and the application of skill and science. Did you notice this similarity yourself?

RK:  I was very impressed by the great craftsmanship, skill and applied science that are combined in the whisky-making process. As far as similarities go, the time and care that people took in particular impressed me. When I create an artwork, I take as much care as I can, paying attention to the details and devoting as much time to it as possible. Some may think that the idea of creating something with care goes against the grain in today’s world, where what is required is speed.


W*:  Did the slow time signature of whisky production have an influence on the time signature and rhythms of your artistic composition? Was combining the slow, hand-drawn sketches part of the creative process of your representation?

RK:  As the title ‘Time Re:Imagined’ suggests, the theme of this project is time. Also, audio-visual work is a process in which both sounds and images are shaped by time, so the creation of this project was heavily influenced by the passage of time in the whisky-making process. As a result, I think it has gentler and more relaxed textures than my usual work. I sought to make this composition, which is divided into several sections, mostly express gentleness and smoothness. But the 30-year-old, 40-year-old and 50-year-old whiskies each has a very short section lasting one minute; these parts express dynamism and strength, so they are closer to my typical compositions.

W*:  The artwork for the Suspended Time 30-year-old whisky focuses on the moment when Glenfiddich’s malt master suspends the development of the whisky. How did you interpret this special moment – a specific balance of spirit and maturation – visually?

RK:  For 30YO Suspended, the keyword was ‘moment’. The idea of finding the decisive instant was expressed abstractly through stillness and motion. For all the pieces, I drew on my experience of Scotland’s natural beauty. All the colour choices, colour combinations and textures for the three pieces were sampled from nature. I also had the title ‘Time Re:Imagined’ in mind when choosing colour combinations and the like. To differentiate each passage of time clearly from the others, the artwork for the 30-year-old whisky features natural objects with vivid colours, observed close up and drawn entirely with dots.

W*:  The artwork for the Cumulative Time 40-year-old whisky showcases the layers of flavour that culminate over time. It celebrates evolution with one thing building on another. Did you experience this layering effect also?

RK:  Inspired by Glenfiddich’s pioneering remnant vatting process of maturation, the effects of time are made physical in the 40YO Cumulative artwork. The dimension of space stands in for and expresses the dimension of cumulative time. The piece is drawn entirely with lines. Groups of lines stand in for layers of time, repeatedly stacking together in complex ways to generate new abstract landscapes. This showcases one of the three key elements in Glenfiddich whisky production – water.  The gentle, flowing motion of water is used in the artwork for the 40-year-old whisky, with an animation showing a single line developing into a complex layer as time passes.


W*:  For the 50-year-old whisky – Simultaneous Time – all the events, people and occurrences of 50 years are imagined as experienced all at once, in what’s more of a spiritual moment than a process. Is that reflected in your composition?

RK:  50YO Simultaneous embodies the concept of simultaneity – simple and complex lines, both straight and curved, all existing simultaneously within a single frame. This whisky is a sip of every moment of a unique 50-year span of time, entirely unrepeatable and entirely unforgettable.


W*:  Whisky has a very distinctive colour. Did the tonal range of Glenfiddich’s aged product inspire you?

RK:  Yes, the colour of the whisky was used to give the composition for the 50-year-old whisky a distinctive character. It combines a variety of hues of yellow, orange and white and other colours to produce a sparkling gold resembling the rich colour of whisky.


W*:  Are you a whisky drinker yourself? What do you enjoy most about the whisky  experience?

RK:  I am a whisky aficionado. Savouring it slowly helps me to relax, and sometimes I also drink it to enable me to focus on creative thinking.

The casing design was created at Nagami, the architect’s experimental laboratory in Avila, Spain. ‘I've always been fascinated by data and nature, and how mathematics inside nature work, and become forms and textures and colours,’ says García. ‘When Glenfiddich approached me to start this project, they had this vision for representing data into a physical form. I was very interested to learn about the uniqueness of the weather conditions in the Glenfiddich distillery in Dufftown: how hot summers would speed up the maturing of the whisky, whereas cold winters would slow down that process.

‘So, temperature, air pressure and humidity influence the design – those three parameters used create a form where each triangle represents one year.’

The slow and carefully crafted creative journey of each liquid in the Time Re:Imagined collection was another inspiration. It was a case of ‘understanding just how and why the taste, the colour and the texture of this whisky is the way it is’, says García. ‘Everything that has happened in the last 50 years to influence the matureness of each particular whisky. We embodied those 50 years into an object that represents and encapsulates simultaneous time.’ 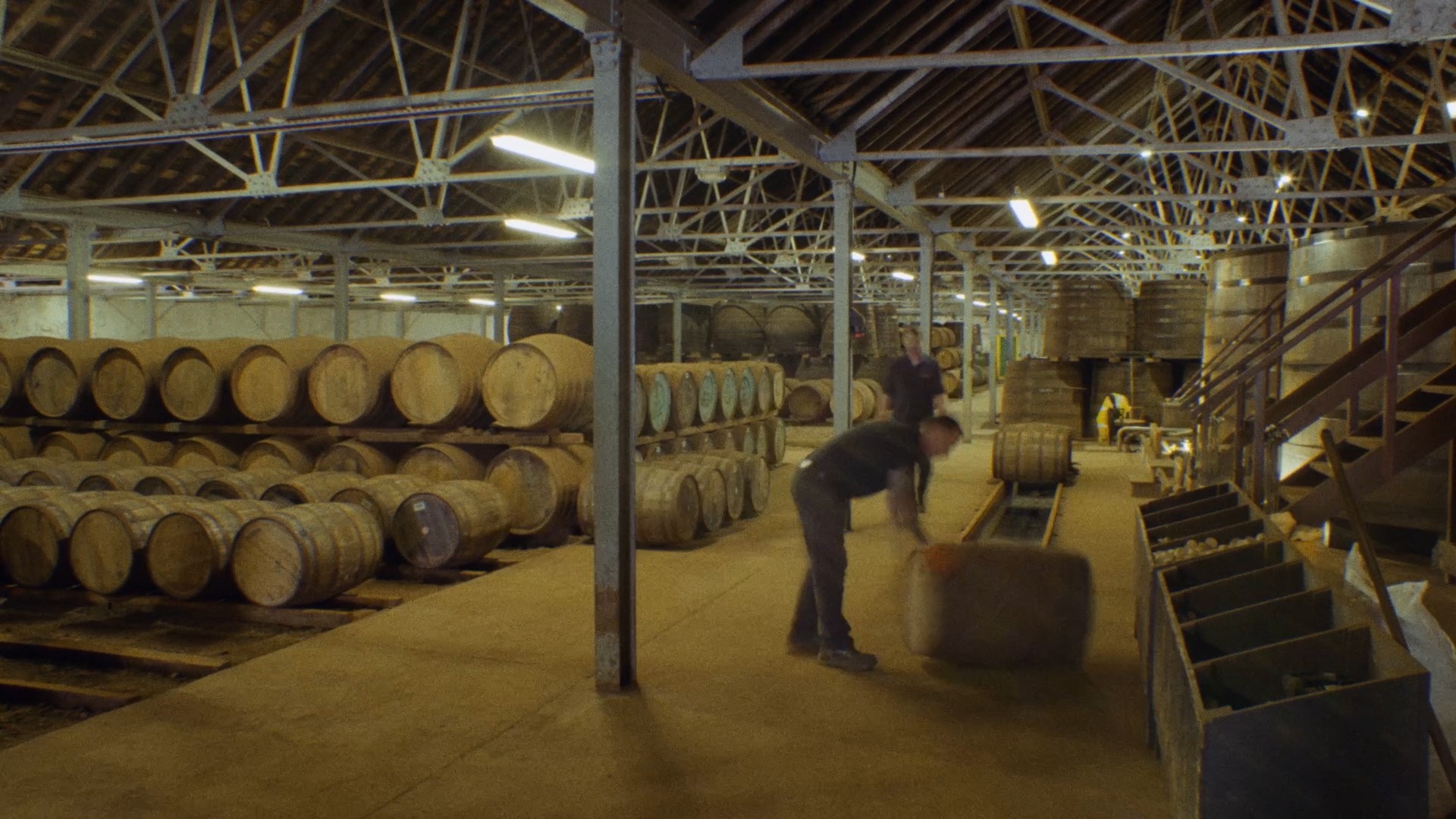 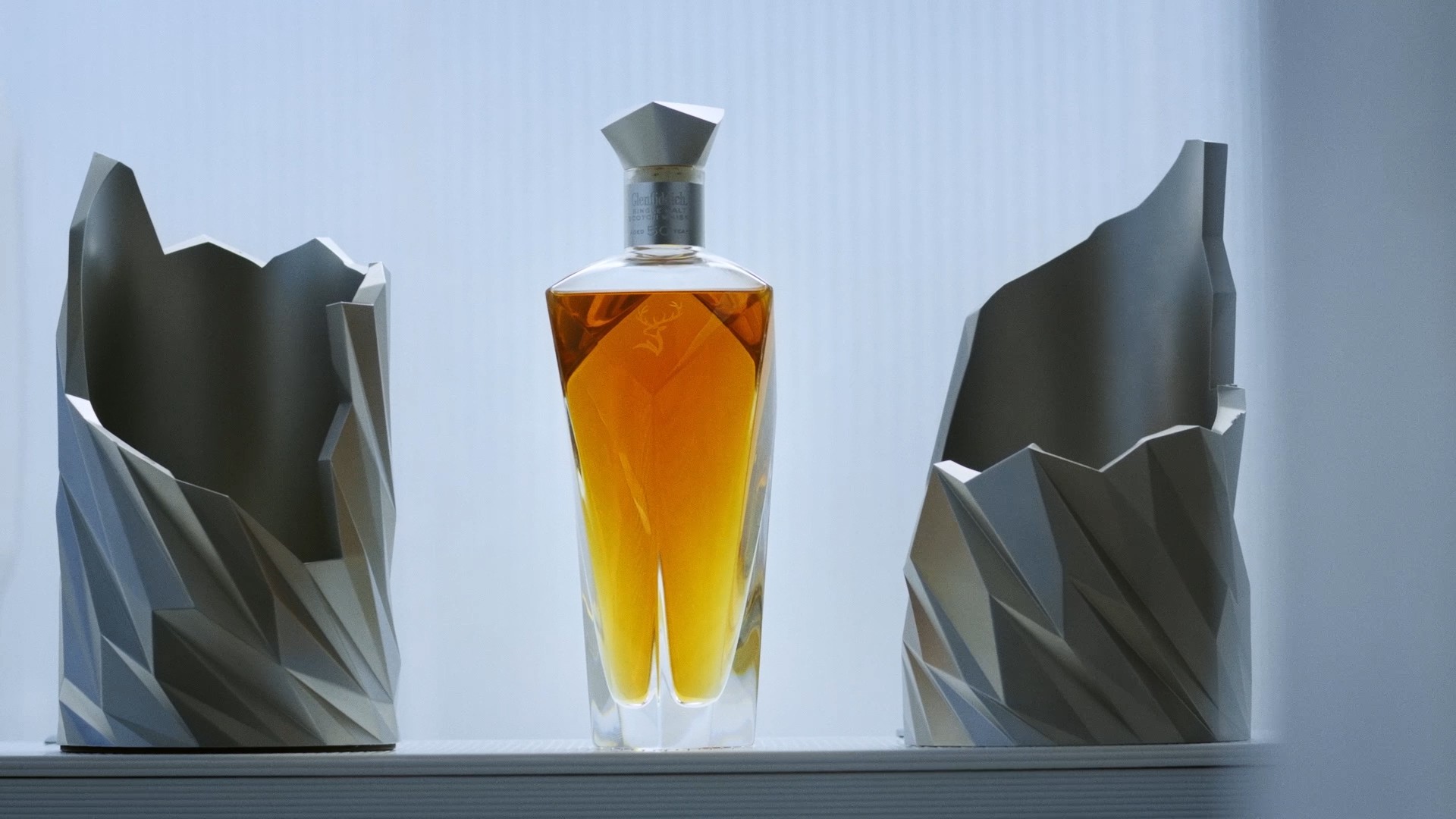 INFORMATION
To learn more about the Time Re:ImagineD Collection of whiskies, visit glenfiddich.com