Rising tide: with standards of luxury swelling, Princess Yachts is on the up

Owned by LVMH’s Bernard Arnault, Princess Yachts is one of the largest boat making companies based in the UK, producing luxury yachts. Pictured, the heavy-duty steel frame, which forms the basis of a yacht’s hull. Photography: Samuel Bradley

A mile away, at the company’s Newport Street HQ, is a luxury production line of mammoth proportions – one shed alone contains five 27m and four 23m yachts under construction. Meanwhile, nearby, sits a white building, slightly larger than a domestic garage, where David King and two friends founded what was then Marine Projects Ltd 50 years ago.

Princess Yachts is now Plymouth’s second-largest employer after the Royal Navy, with more than 2,000 craftsmen on five sites producing around 220 luxury yachts each year. The company’s apprenticeship programme is a rarity in post-industrial British cities like Plymouth. In the 1960s, the company’s largest production model was a 9.5m boat. Now its smallest is 12m and the largest is a 40m glittering shard of hydrodynamic luxury called the M40.

When it comes to yachts, size matters. From every oligarch owner in Cannes to every weekend sailor in Cowes, the length of their boat is the start of their conversation. For the land-bound, a 40m yacht is the length of about five double-decker buses – but much taller. Out of the water, seen from below, a superyacht is like a small apartment block in gleaming fibreglass and aluminium.

The exterior size matters on the inside, too. ‘Boat design is very functionally based,’ says Antony Sheriff, Princess’s ebullient American executive chairman, who joined the company in January 2016 from McLaren sports cars. ‘There are real, functional characteristics that affect the hydrodynamic performance. Basically, you want to make the front as small as possible, but you are always trying to find the correct mix of interior space, stability and performance.’ 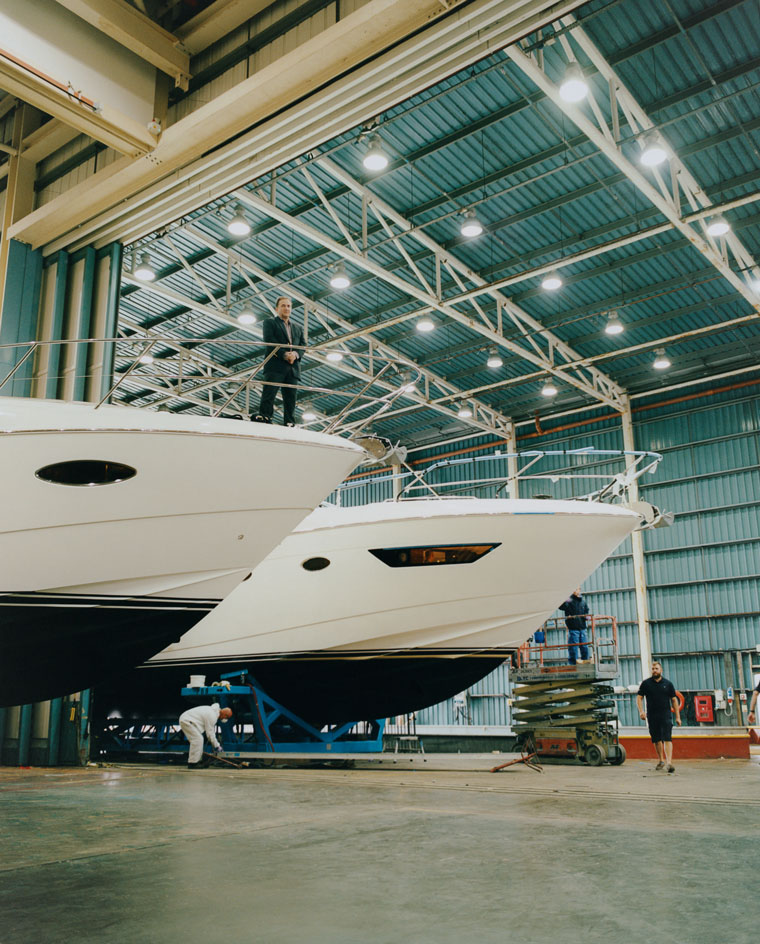 Anthony Sheriff, chairman of Princess Yachts, on the bow of one of several vessels currently under construction in their Plymouth boatyard. Photogaphy: Samuel Brady

The limits on interior space mean there are restrictions for superyacht owners wanting to bring in bespoke designs and designers. ‘We know boats to the millimetre,’ Sheriff says. ‘If someone wants a slightly longer sofa, we know that is going to impact on the space for the wine fridge that fits exactly under the stairs on the other side of the bulkhead.

In yacht design, one change has a ripple effect throughout the boat. It takes a great deal of experience, and an ability to walk through a design in your head, to create a layout  that feels natural and comfortable, yet has everything you need to live in a limited space.’ Sheriff explains that for his market, a boat is an alternative to buying a villa on the Côte d’Azur. A villa that you can move to Italy or Greece when you get the urge.

The elemental form of a boat determines interior design in ways non-yacht people don’t always immediately understand. In poor designs, structural elements can force users to go up and back down a lot of stairs every time they move. ‘We work hard to provide visual calmness,’ says Sheriff. ‘If the floor is flat throughout a deck, the designer has a good understanding of boats.’

Princess has worked for decades with Isle of Wight naval architects Olesinski for the hull designs and window graphics, while a team of in-house designers, led by Sarah Verey and Andrew Lawrence, focus on the interior finishes, fixtures and fittings (the company employs 400 carpenters).

Princess is owned by LVMH’s Bernard Arnault, which means many of its boats have Fendi Casa or Hermès interior styling. The bigger the boat, the longer the options list the company provides, and the more scope the owner has to bring in their own elements – one M35 yacht owner has a glass case for his superbike that also functions as a bar, while a recent Asian client commissioned a Linley humidor to keep the sea air out of his cigar collection. Regional design variations are often environmentally determined – Princess creates enclosed, air-conditioned spaces for Asian owners, while boats heading to Florida are designed for the open air.

According to Boat International’s reports, the Americans are again at the forefront of the superyacht market, after several years of what one hesitates to call billionaire austerity. The Russian market was recovering when the oil price crashed, while Chinese crackdowns have made wealth-flaunting politically sensitive. Nevertheless there are increasing numbers of people with money to spend.

‘Boats just keep getting bigger,’ says Sheriff. ‘And wealthy people rarely stop spending for very long.’ He plans a period of gentle expansion, developing new models at a slightly increased pace and overseeing an evolution in the design of the yachts. ‘A Princess yacht should look like a Princess yacht,’ he says. ‘Always classically beautiful, but modern – we follow the Raymond Loewy MAYA principle, to be “the most advanced yet acceptable” in industrial design.’ Princess yachts, he says, will never have the aggressive window graphics of some superyachts: ‘The ones that look like they’re going to eat you.’

Sheriff’s decade at the helm of McLaren also taught him about the rarefied market he operates in. ‘The boat is only half the equation,’ he says. ‘The other half is the experience of owning a boat. Clients get to know us and the engineers become old friends. I know someone at Apple who stopped buying a particular supercar because he didn’t know the people who made them any more.’

At Princess, the craftsmen making the yachts in the old naval yards are part of a 300-year-old tradition, but are now serving an ever-growing market of global super-rich. Only the nuclear submarines being serviced in the next dock along cost more – and they have to do without Hermès leather seating.

Left: a selection of veneer edging for interior fixtures and furniture. Right: a galley under construction. Photography: Samuel Bradley