When the eulogies for the combustion engine comes to be written in a few decades time, a generous obituarist will no doubt throw a few lines in the direction of Audi’s V8. It’s by no means the most emotive or evocative engine ever built. It doesn’t roar like an American muscle car, or scream like an Italian supercar. There’s no burble like one finds on a classic British sports car. Instead, there’s the bottomless abyss of thrust, a muted roar that barely finds its full voice before you’re travelling at a rate better suited to take-off and almost certainly in excess of any posted limits. It’s deployed in a number of Audi’s more outré sports cars – the R8 and RS6, for example, but for our money the best place to experience it is in the elegant RS7, a big four-door ‘coupé’ that’s explicitly pitched at those who like their cars to make an aesthetic statement just as much as an engineering one. 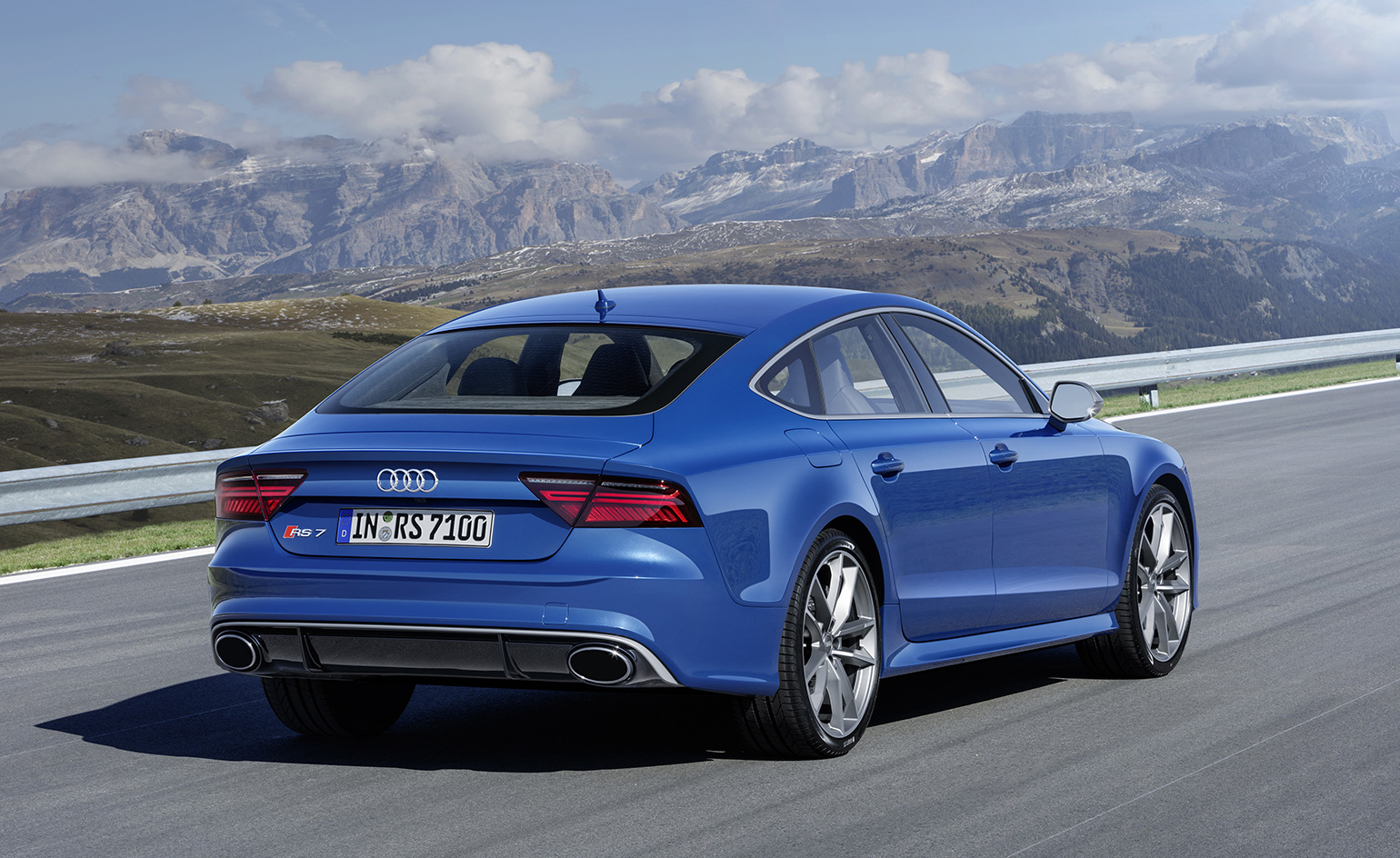 The RS7 has an undeniable presence, helped no doubt by the hefty scale that gave Audi’s designers plenty of room to perfect the lines

It’s a beautiful car, the A7. Admittedly the RS7 Sportback doesn’t exactly improve on the flowing line of the well-proportioned original as enhance it – it’s a matter of personal taste as to whether spoilers, ducts, grilles and a generally more aggressive vibe gel well with the tailored simplicity of the ‘basic car’. But it has an undeniable presence, helped no doubt by the hefty scale that gave Audi’s designers plenty of room to perfect the lines. Inside, the usual Audi interior quality is present and correct, although aficionados might note that everything is looking a little bit last generation; Audi’s most recent models have wholeheartedly embraced the ‘digital cockpit’ concept, with screen-based dashboards that change according to the tastes and information demand of the driver. A full plethora of driving aids, including the Quattro four-wheel-drive system, help get the V8’s power down with a minimum of fuss, and the adjustable ride does a good job of cosseting or bolstering depending on the road surface and speed.

Building big beautiful cars simply isn’t enough in today’s auto market. The RS7’s replacement is waiting in the wings, but rather than simply replace the current car with something a little swifter, sleeker and more impressive, any new model will have to better represent the culture change that is sweeping through the car industry. Political rumblings in Germany recently suggested that there’s enough momentum and popular support – among consumers and manufacturers – to instigate a ban on new traditionally-powered cars being made after 2030. Instead of the expected howls of outrage (imagine if such a scenario had been suggested in the US or UK), there was a steely silence; you can sure that there’s a spreadsheet somewhere that plans for exactly this scenario. 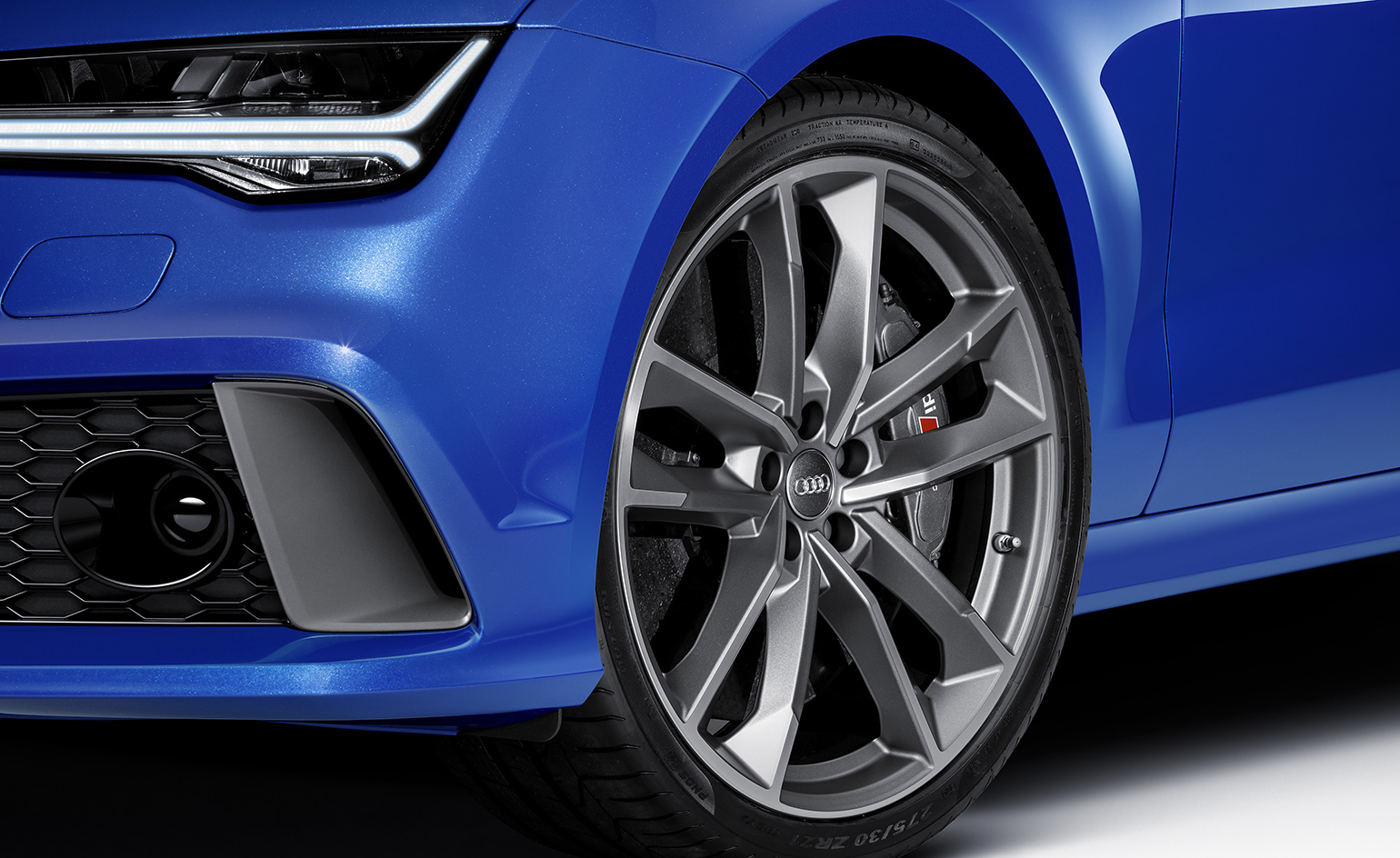 Detail of the Audi RS7 Sportback

Audi has largely dodged the bullet taken by its parent company for its well-documented sins against emissions testing, even though both companies share many of the tainted components. The VW Group knows it must fight back and becoming a big player in electric cars and Audi and VW itself will help rebuild its image (hence VW’s sparky ID concept exhibited at Paris last month). The next A7 will almost certain include a hybrid option; Audi are predicted to start their all-electric car push with SUV models at the beginning, with saloons and hatchbacks to follow. Right now, however, the RS7 represents a final charge, doomed yet dramatic, for the raw deployment of old-fashioned power. It’s a fine note on which to sign off on, but expect the next generation of big, bold Audis to move the company’s image on to another level.

Inside, the usual Audi interior quality is present and correct, although aficionados might note that everything is looking a little bit last generation

The brand’s most recent models have wholeheartedly embraced the ‘digital cockpit’ concept, with screen-based dashboards that change according to the tastes and information demand of the driver