Members of NeueHouse’s LA outpost are greeted by a polished white marble reception desk, where the historic main broadcast control was located. Historical details include board form poured concrete walls and an original pair of doors to its two-floor theatre space, Studio A

When NeueHouse first opened in New York in September 2013, it effortlessly spun the co-working space archetype on its head. Armed with elegant interiors courtesy of Rockwell Group, custom-designed office furniture, an in-house restaurant, broadcasting studio and a host of special programming, the community-oriented workspace seems more like a member’s club than an office.

The formula proved so successful that for its second location, which recently opened in Los Angeles, NeueHouse chose a seven-storey building, almost double the size of its Manhattan original. An icon in itself, the 1938 landmarked building was previously home to CBS’ radio and television studios until 2007 and designed in the international style by William Lescaze, a Swiss-born architect. It also happens to be steeped in media history; Orson Welles broadcasted radio programmes from there, while the pilot for Lucille Ball’s I Love Lucy was filmed on the premises. 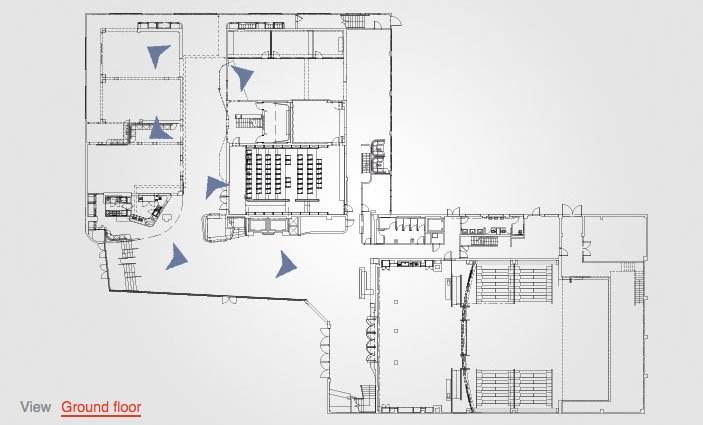 Take an interactive tour of NeueHouse

Rockwell Group has reprised its role again here. Collaborating with NeueHouse’s in-house design studio, the firm has drawn from the site’s creative history and channeled it into a dynamic hub that will serve a growing breed of creatives and entrepreneurs in Los Angeles’ entertainment industry.

Thanks to an abundance of space, NeueHouse LA offers a full breadth of amenities. On the ground floor, a variety of work areas are carved out, along with the preservation of the building’s historic lobby, the addition of a coffee shop and cafe, plus a flower shop that will offer seasonal, freshly cut blooms. The working environments offer a range of privacy levels, from communal stations that facilitate collaboration, to secluded hideaways, clusters of meeting rooms and a listening room for more focused sessions.

In addition to preserving period features, such as original staircases and elevator dials, the two firms added white marble accents and board-formed concrete walls to break up the austere space. Moroccan rugs, which are strewn casually, reference the way modernist architects furnished and added warmth to their homes.

On the higher floors, beautifully composed office studio spaces are peppered with lounge areas and views of the Hollywood Hills and downtown LA. On the second floor, a library lounge decorated with vitrines filled with studio artifacts opens on to a sprawling terrace, where cabanas offer another work environment while making full use of the Californian climate. There’s yet another terrace on the third floor, best suited for hosting events.

The Paley Penthouse, an 18-seat boardroom named after CBS president William S Paley, might seem pretty hard to beat with its Bauhaus-inspired furniture, piano finished millwork and French doors, but the building’s real winning feature is Studio A – a two-storey theatre with bleacher seating that can be configured to host a variety of screenings or music events.

By membership only. For more information, visit NeueHouse’s website