At the beginning of 2020, Mercedes-Benz offered Wallpaper* a preview of a new collaborative art project it was working on, due for launch later this year. The raw material was its four-decade-old, classic SUV series the G-Class, or G-Wagen, as it is also known. The collaborators were Gorden Wagener, the brand’s chief design officer, and Virgil Abloh, the designer, architect, entrepreneur, DJ, artist, artistic director of Louis Vuitton menswear and CEO of his own fashion label, Off-White.

This collaboration is quite a coup for the car maker. The resulting piece, to be unveiled this autumn, is called Project Geländewagen (Geländewagen is German for ‘terrain vehicle’, from which the G-Wagen gets its name).

Abloh has become one of the world’s hottest designers in recent years. Originally trained as an engineer and architect, he works across a whole range of media, but specifically with brands, their products and where they interact with popular culture. He has been called an ‘arch appropriator’ and indeed he does specialise in editing existing objects or tropes. Give him the core parameters of a brand, product, object or form typology and he will deconstruct and realign their narratives, making them ‘of the now’ by endowing them with new context – both historical and contemporary. This is not so much appropriation as an understanding and continuation of the cultural fractioning that defines our post-postmodern world: editing and remixing what went before. Brands such as Nike, Evian, Ikea and Vitra love Abloh for this fluency, not to mention the potential access he brings to a younger global generation also adept at growing new contexts from fragmented sources and re-expressing them in a language of emojis, memes, acronyms and filters.

This is a generation that, despite its love of appropriation and its ease with commodification, is becoming increasingly distanced from aspirations of ownership of large possessions – such as cars. So, did Abloh approach this automobile brand project in a different way to past ventures, a pair of Nike Jordans or a Jean Prouvé chair for Vitra, for example? ‘It’s of the same language,’ he replies. ‘I’m investigating the same thing across all objects aside from fashion. If you ask an average person on the street, they realise that fashion has an ongoing practice of designing a new pair of pants, shirt or whatever, but they don’t notice a door handle design unless it’s broken. They are not thinking about where objects are derived from, and I want to use my career as a way for a young generation to appreciate design in its full capacity – not just fashion.’ 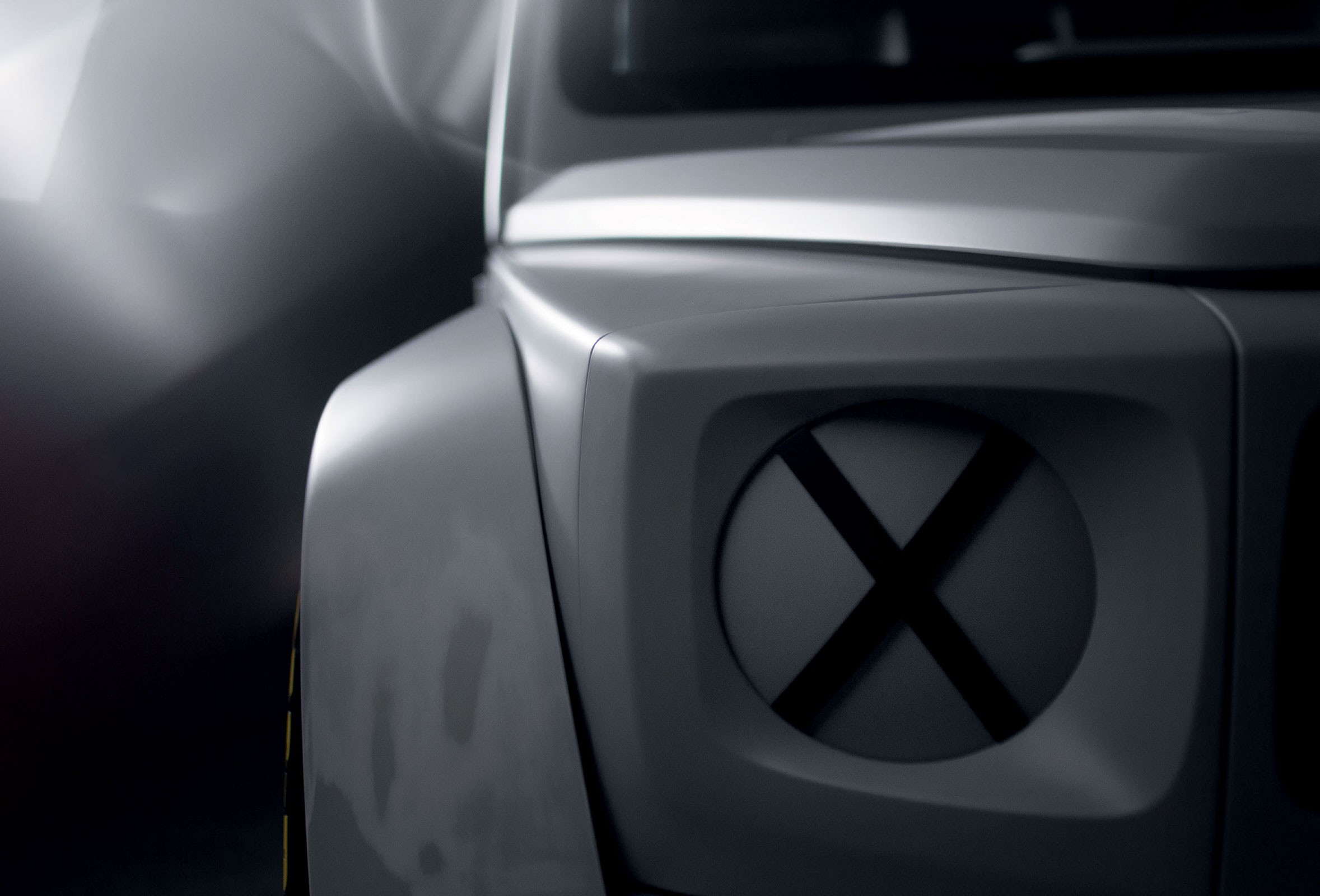 Our photographs preview the collaboration, which reinterprets the Mercedes-Benz G-Class as a work of art. Luxury is expressed partly through a ‘filler grey’ finish, sanded in patches to highlight the layers of labour

The reduced dashboard of Project Geländewagen

Therefore, what made this particular collaboration interesting for Abloh was not so much the chance to rethink a single distinctive product, as to identify the core narrative thread of the Mercedes-Benz brand: ‘I told Gorden when we first met that I am an aficionado of boxy objects and boxy cars. There’s only a few on the market and that’s part of why the G-Wagen is so iconic – its design language comes from a different point. But when I walked into the design hall at Mercedes-Benz I stepped into the whole ethos. [The G-Class is just] one car among a hundred cars,’ says Abloh. That narrative thread, in Wagener’s view, is luxury. ‘I don’t see Mercedes-Benz simply as a car brand,’ he says. ‘I see it as an international luxury label and my aim is to make it the most loved luxury brand. So, of course, you have to come up with a new definition of luxury and that’s really what Virgil brought in.’

Adds Abloh, ‘It’s about me coming in and understanding the universe that Gorden oversees. It was the understanding of the matrix, what the brand means and also where the brand started – because for me you can’t start designing without knowing the history.’ Once he has absorbed this, he can then set about trying to bring a new audience to that historical context through design: ‘A previous generation has been immersed in Mercedes-Benz, but the young generation needs to see how a historical brand or historical ideas of luxury can relate to them.’

The G-Class’ history is one of a powerful, robust, functional, off-road vehicle, first launched in 1979, which also handles well on the road. Originally designed for both civilian and industrial use, it has also had a long and distinguished military career with many armed forces, gradually gaining in popularity as a luxury private vehicle as well. Today’s G-Class image is of a strictly luxury machine and it is this market that interests Wagener most: ‘Of course it’s a luxury product, of course it is urban. Nobody really goes off-road with a $200,000 car – at least most people don’t. With a luxury product, it is not so much about functionality, it is about a feeling for the brand you are selling. And it all starts with the silhouette – that unique silhouette that no other car has.’ The G-Class’ distinctive, box-like, utilitarian silhouette he is talking about implies protection and safety. ‘It is favoured by many female customers because of that: you sit high, you feel protected, you feel like nothing can harm you – and the design expresses that,’ he adds.

‘A previous generation has been immersed in Mercedes-Benz, but the younger generation needs to see how a historical brand or historical ideas of luxury can relate to them’

The first impression of Abloh and Wagener’s Project Geländewagen is that it has little to do with the vehicle’s functional origins or with luxury as it is commonly understood. Both Abloh and Wagener are long-term G-Class owners and drivers and both own Mercedes-AMG G 63 models, which are monster powerhouses with four-litre biturbo V8 engines. ‘There is an essence of the car that is really fast,’ says Abloh.

At a glance, the G-Class may call to mind ‘off-roading, military and, like, a truck truck, but when you step on the gas pedal it moves more nimbly and faster than you’d imagine’. So the most striking aspect of their design is that it evokes speed, power and the race track: the vehicle is low and broad with a widened track to accommodate extra-wide, smooth racing tyres. All the windows, apart from the windscreen, have been removed and replaced with a mesh material. The inside is considerably stripped down, almost all comforts, panelling and padding having been removed. There’s an inner framework of exposed roll bars painted baby blue; a Mercedes-AMG One hypercar racing steering wheel; immaculately upholstered DTM-series bucket racing seats and racing safety belts; and a reduced, functional dashboard. ‘It is the opposite of the G cliché of an SUV,’ says Wagener. ‘This is an on-road vehicle – a race car basically.’ But because this is an art project, not a functioning prototype, there is no engine inside or other technologically innovative additions to the signifiers of speed. The essence of the G-Class survives on the surface, which of course still includes the distinctively edgy chamfered shape and the spare wheel slung on the back. 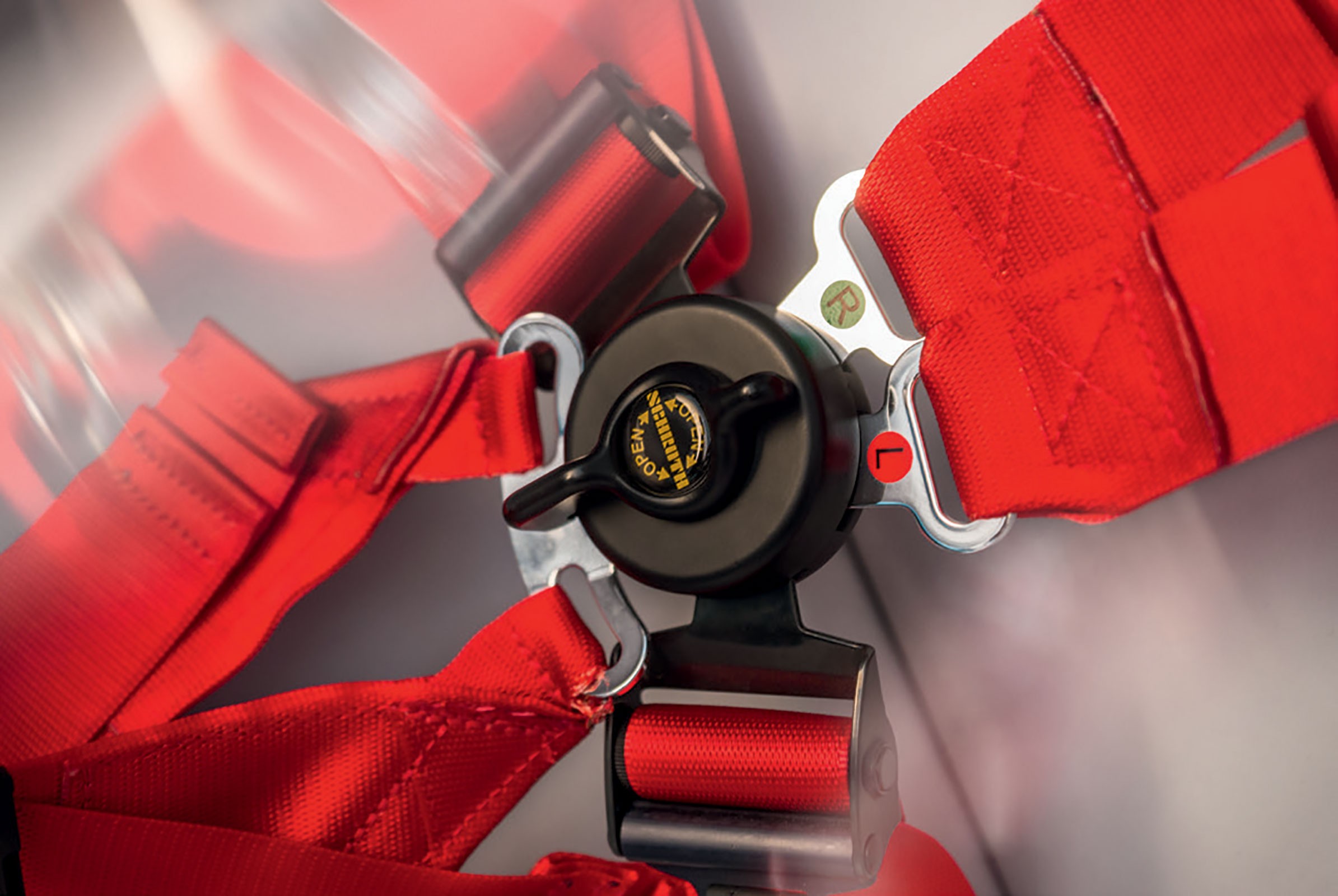 Abloh’s key signifier of luxury for the vehicle comes in the ‘filler grey’ exterior paintwork that has been carefully sanded in patches to reveal multiple layers beneath. ‘It’s about taking the old-world idea of luxury, this idea of hand-finishing, and letting the surface show remnants – that a hand touched it,’ he explains. ‘When you see an object that was handmade or human-made, you can connect with it in a different way to if it was machined to a perfect finish. So we played with that notion and what you see is layers removed. It’s not just a colour, it’s a finish technique that we developed and I’m super proud of.’ With it, he also alludes nicely to the fact that the G-Class vehicles are mostly hand-assembled in a factory in Austria. 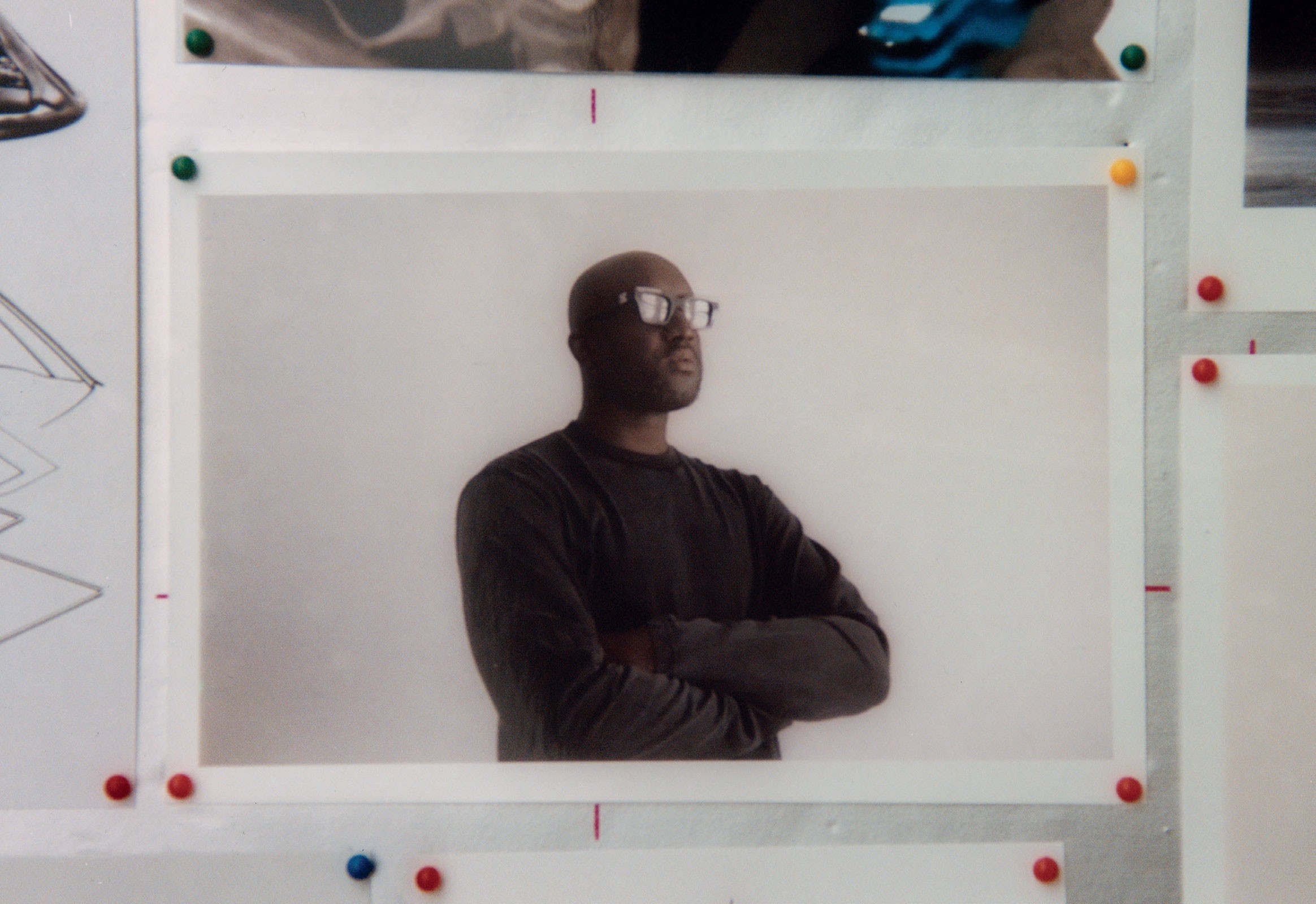 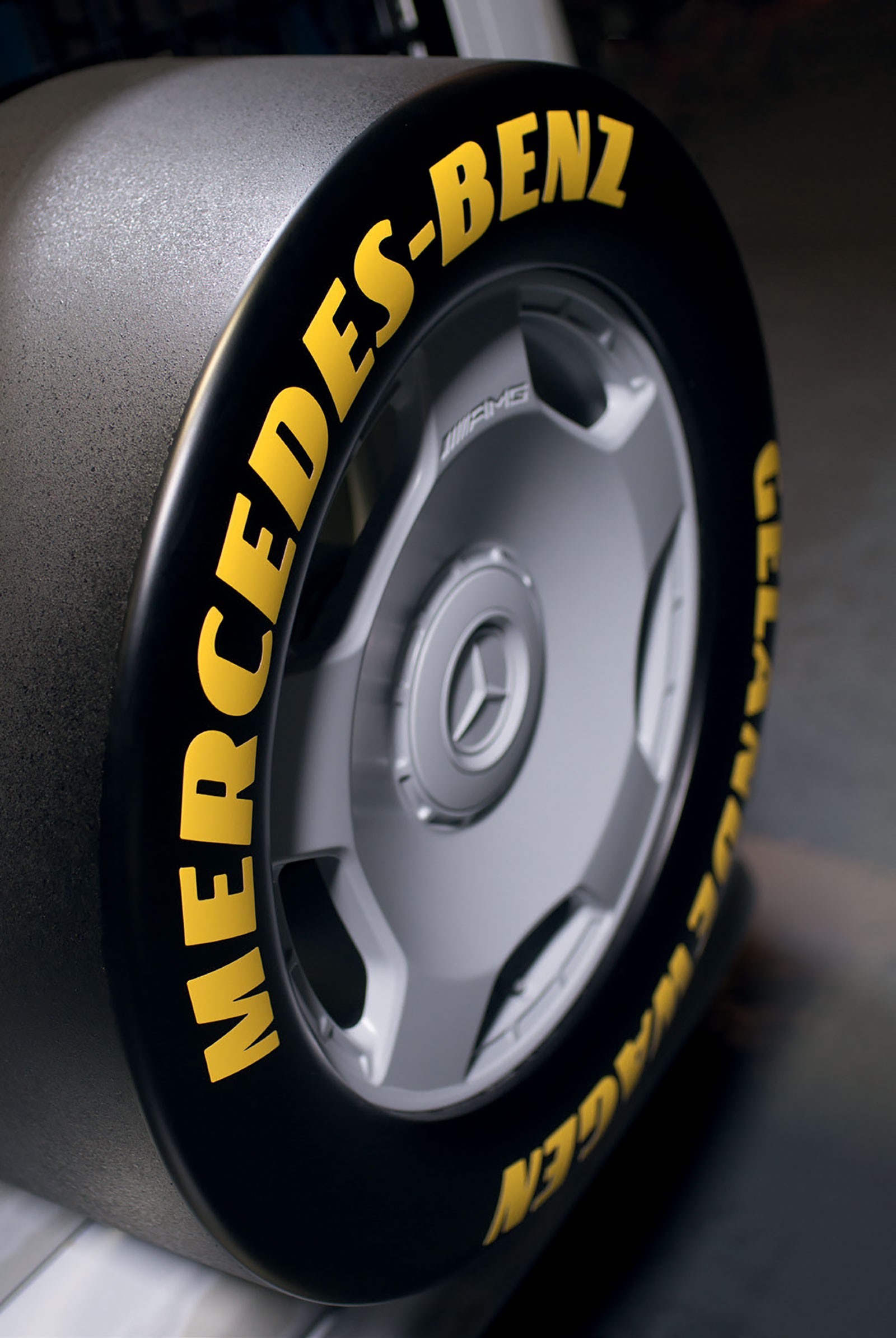 Its extra-wide smooth tyres are among its racing-inspired details 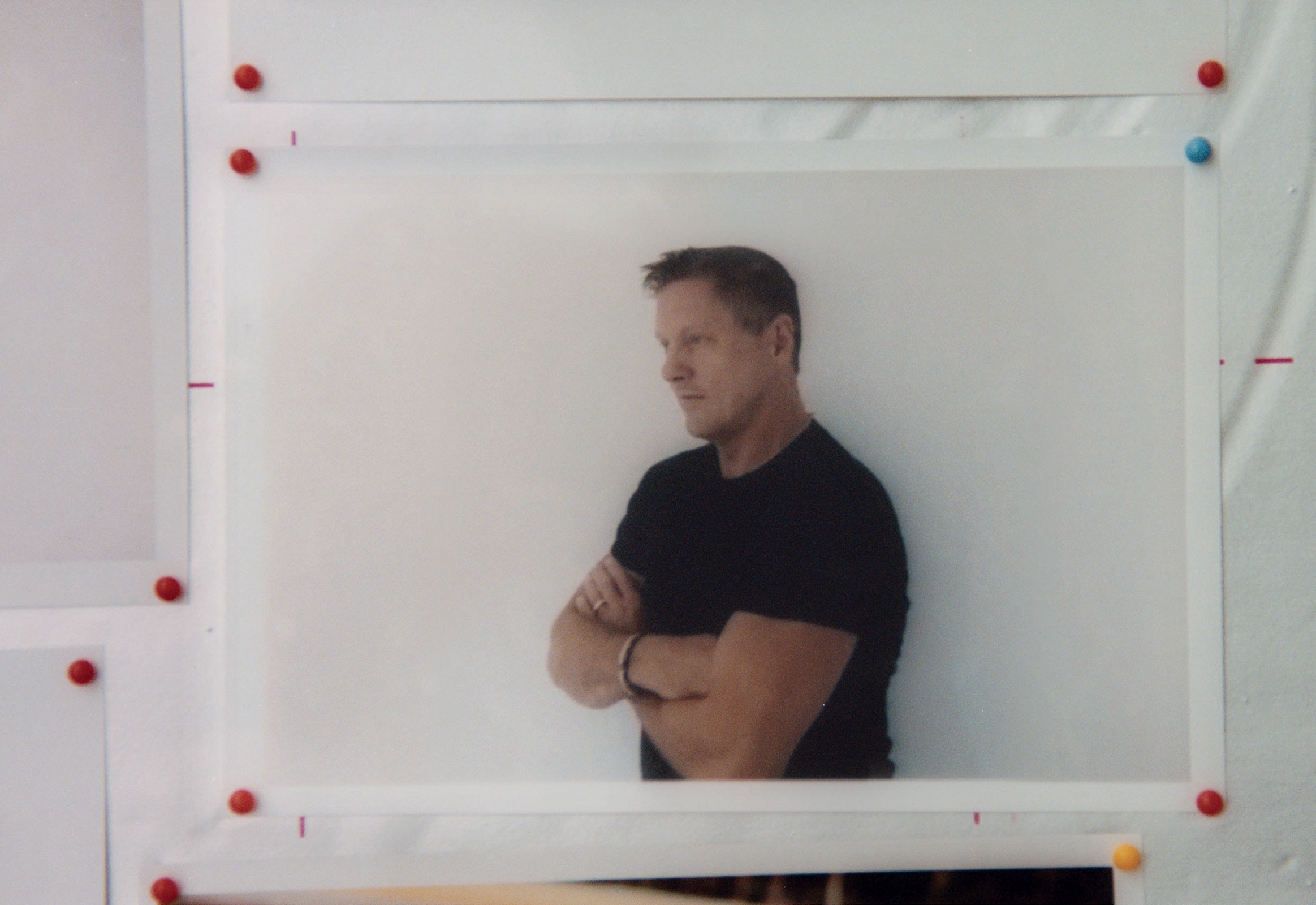 Project Geländewagen has taken place at an extraordinary moment globally, amid a climate emergency, a pandemic, a recession and civil rights uprisings, to name but a few ongoing events. How, then, has this affected the two designers? Has either of them felt the need to rethink their perspectives or for systemic intervention, that is, redesigning the systems within which their product worlds are generated? Both designers pause for a while before answering – maybe this is not a question to expect when talking about an art car project, but unexpected times call for unexpected conversations. ‘The world is not the same as before, that’s for sure,’ says Wagener, ‘but as designers we have a long-term approach. Of course, culture always reflects on design and we will see how we will interpret that, but in general, at least on my work, it doesn’t have a huge impact now.’

‘The question you are asking is broader than design,’ says Abloh. ‘It’s in every field and humanity as a whole, from media to fashion to food. It’s about how we as humans relate to one another and look after one another. As the future rolls on, it’s my ambition to write history in a way that corrects itself. It’s no secret that there is a disproportionate [number] of Black designers in the world today, so how will the future change? I like to let the work speak for itself and I also take on initiatives to open doors to make sure that people can follow in my footsteps. This project is one way. I was a kid of African immigrants that came to Chicago, and through my work but also through the legacy of the programmes that I’m building behind me, I’m going to make sure that other kids like me can continue on.’ §

INFORMATION
Project Geländewagen will be unveiled with a digital event on 8 September, at 4pm CET at mercedes-benz.com; canary---yellow.com 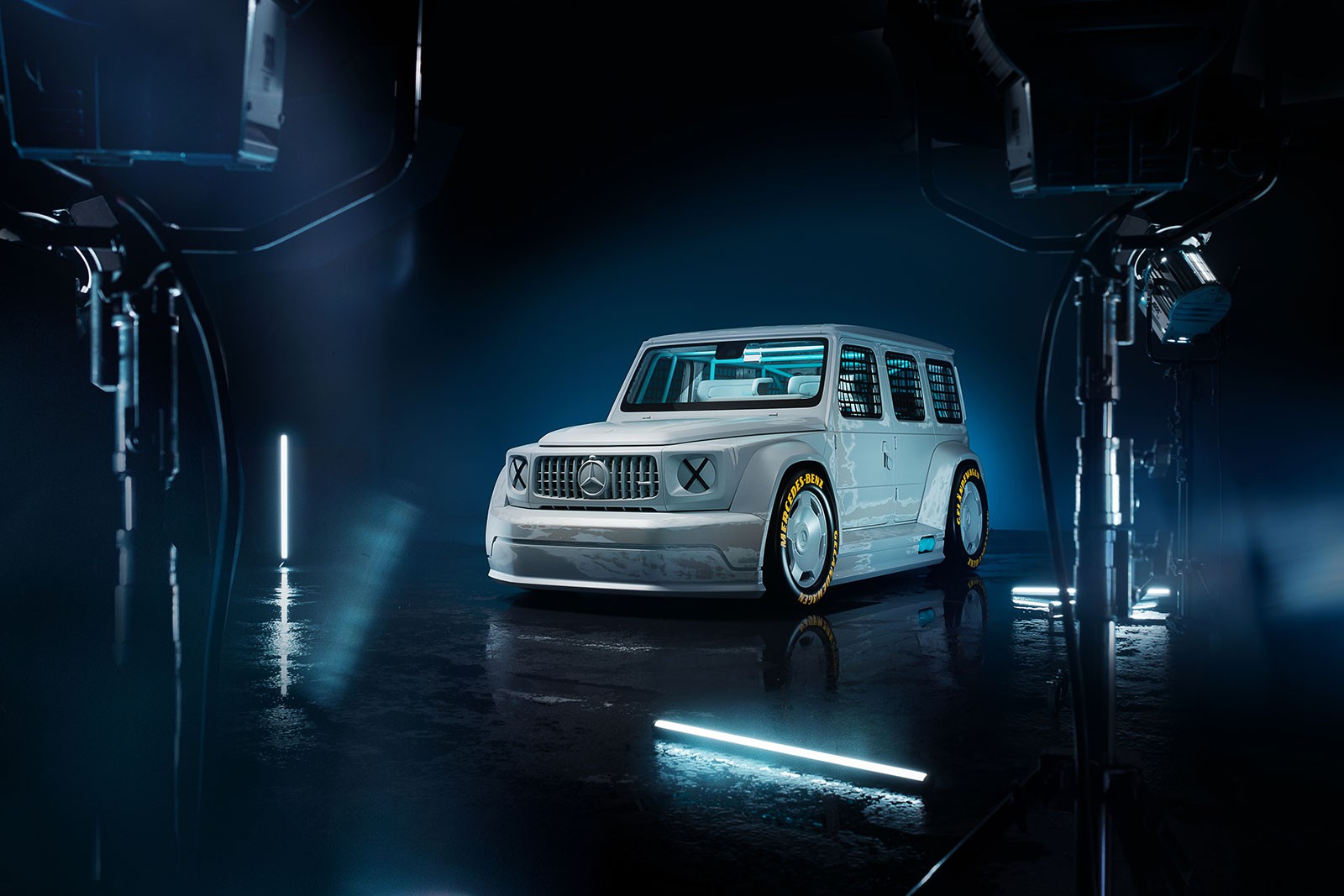