‘There are only two lines in the world: straight and curved. You’re making a decision, but there are only two lines.’ So says Robert Wilson before the vernissage of his glass artworks, which debuted at Laffanour Galerie Downtown during a week filled with FIAC-related exhibitions. If the renowned stage director, designer and visual artist has made this statement in the past, it feels especially apropos in the context of these vessels, each one a unique expression of material, composition and gesture.

Unlike Wilson’s avant-garde theatrical productions, there is no movement here. Yet the glossy, swirling black cylinders, powdered translucent truncated pyramids turned upside down, bowls glowing turquoise from within and elongated domes as impermeably opaque as granite all contribute to a scene of dynamic figures. ‘People think of glass as light and transparent; but I was also thinking the opposite,’ he explains, describing his initial intention as ‘dark, non-transparent, heavy’.

The earliest versions date back to 1994 when he was welcomed into the workshops of the Centre International de Recherche sur le Verre et les Arts Plastiques (CIRVA). He observed master glass maker Lino Tagliapietra from Murano and would propose ideas as free-form drawings. Until 2005, he spent time realising new variations. ‘I kept trying to contradict myself,’ he says. Some may register more finished than others; Wilson maintains that, at the time, he wasn’t concerned with whether they would be exhibited. 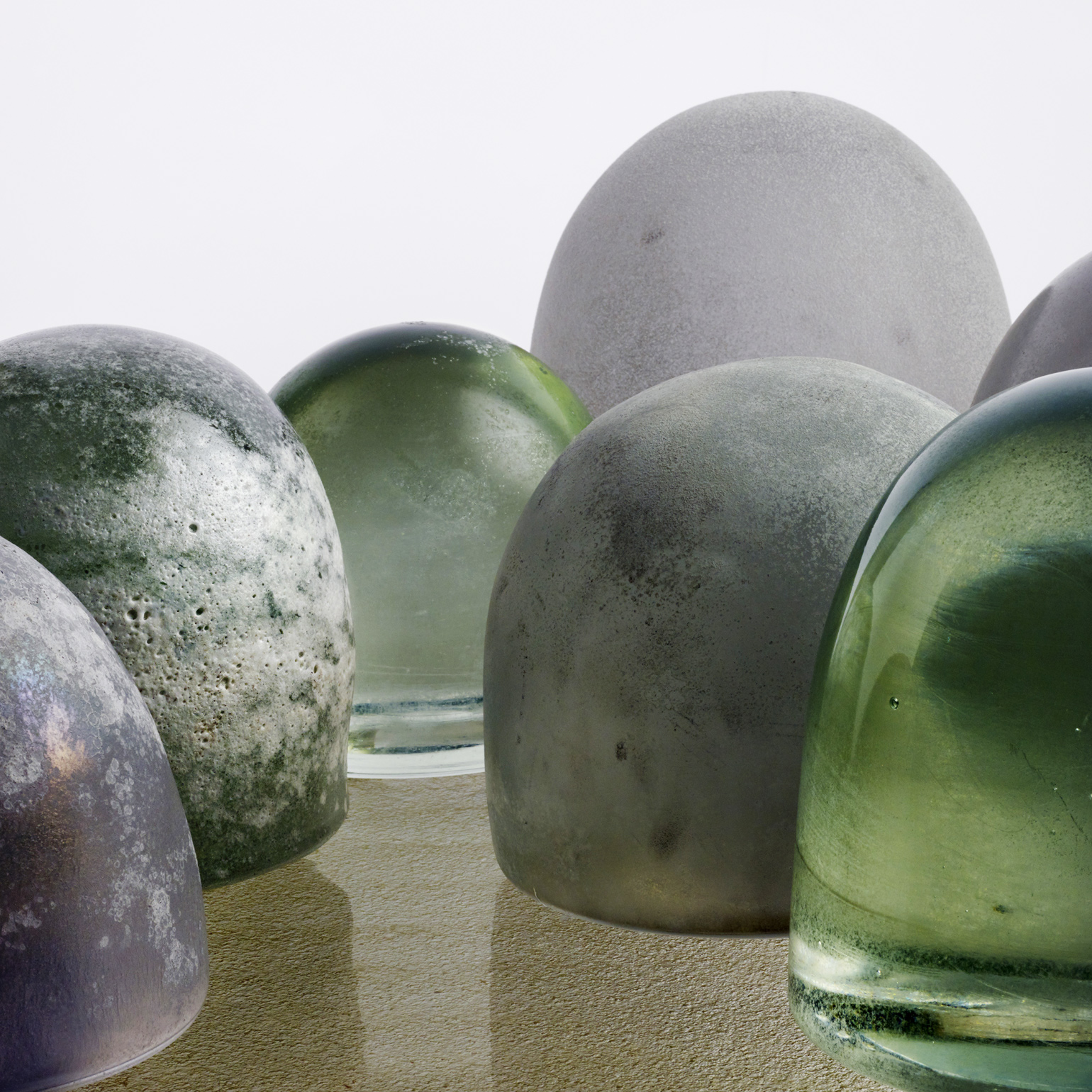 But now that they are, he notes how each brings him back to a personal moment that exists independent of the final shapes. ‘They have memory,’ says Wilson. Perhaps that’s why their titles – The Beach, Plato, Full Moon, Black River, Orlando, Friends, The Tree – sound at once so random and evocative.

During our conversation, Wilson, who recently celebrated his 75th birthday, began illustrating his thought processes, noting a consistent pattern of pure design, whether a Madame Grès dress, his lighting for Einstein on the Beach, or the Richard Wagner opera Parsifal. As someone who seems to fluidly shift between creative expressions, he suggests that, fundamentally, his body of work projects the same considerations of structure and light. ‘I think an artist’s work is like that; whether you’re writing a play or writing an opera or making a drawing or making your piece of glass, it’s all a part of one thought process,’ he says, ‘It can take different forms, different manifestations; you can get older but it’s still the same body.’

Anyone visiting the Left Bank gallery would not be wrong to assume Wilson oversaw the scenography. Credit, however, goes to gallerist François Laffanour. Within the darkened space, the groupings appear at waist-level, spread out across stages without any formal or thematic arrangement; directly above, the ceiling has been lowered, dramatically tightening the spaces and concentrating the light. Wilson seemed delighted to be relieved of the responsibility, musing, ‘I couldn’t have done such an interesting installation’.

Wilson notes how each vessel is imbued with a memory. To wit, their titles – The Beach, Plato, Full Moon, Black River, Orlando, Friends, The Tree – sound at once random yet evocative

Within the darkened space at Laffanour, the groupings of glassworks are displayed at waist-level, spread out across stages without any formal or thematic arrangement. Photography: Thomas Michard

Small sketches would outline the desired shape to the glassblower. A pencil line, carefully smudged with the finger, specified the volume its surface would have. Photography: Marie Clérin

‘People think of glass as light and transparent; but I was also thinking the opposite,’ Wilson explained, describing his initial intention as ‘dark, non-transparent, heavy’. Photography: Marie Clérin

Bowls glowing turquoise from within and elongated domes as impermeably opaque as granite all contribute to a scene of dynamic figures. Photography: Marie Clérin