When Herzog and de Meuron’s highly anticipated Switch House extension opened at the Tate Modern in June this year, the cavernous Turbine Hall that was once a ‘dead end’ within the museum became its heart; a space that leads visitors across from the original riverside building to the new galleries.

It was a change of circulation that was closely observed by the Hall’s latest resident, French artist Philippe Parreno, whose installation Anywhen opens today as the second in a new series of annual site-specific Turbine Hall commissions sponsored by Hyundai.

A master of the immersive, Parreno is the perfect candidate to take on the halls’ cavernous space – he was famously the first artist to take on all 22,000 sq m at the Palais de Tokyo in 2013 and just last year he filled New York’s gargantuan Park Avenue Armory with his show, ’H {N)Y P N(Y} OSIS’.

‘There has never been a project that has used the Turbine Hall in this way,’ says Tate assistant curator Vassilis Oikonomopoulos of Parreno’s typically immersive installation, ‘not topologically, not technically or even architecturally.’ 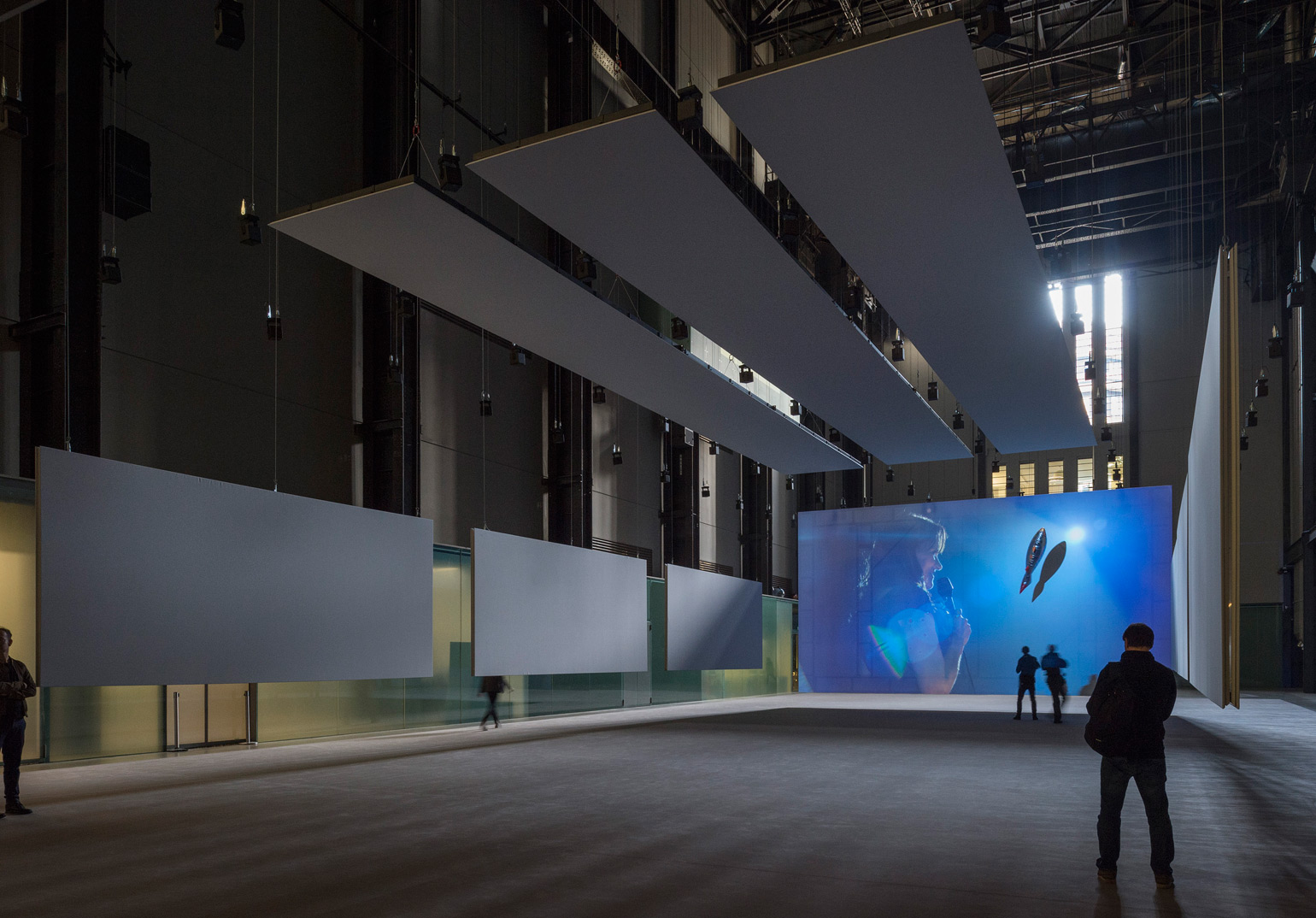 Keen to extract elements of the Hall and integrate them into his ‘living’ exhibition, Parreno became the first ever artist with a Turbine commission to go and talk to the architects, visiting Jacques Herzog and Pierre de Meuron at their offices in Basel in order to better understand the design of the space.

The result is an exhibition that sees Parreno ‘playing’ the Hall like an instrument, so that visitors approaching from all entrances can’t help but be drawn into the spectacle. As music and sound designed by Nicolas Becker with Cengiz Hartlap blares out, the Turbine’s light boxes flash in time, a temporary cinema space gracefully drops down from the ceiling and a shoal of inflatable fish float serenely past. A ghost-like white marquee – a familiar accoutrement from the Parreno toolbox – is installed on the Turbine Hall’s Level 1 bridge alongside a moving spotlight (made in collaboration with Liam Gillick) that snakes through the hall on a rail casting beautiful shadows as it goes. Elsewhere, the outside is brought inside in the form of daylight from the Hall’s towering windows as well as live sounds that have been recorded on microphones placed in and around the building.

The suspended cinema space, that consists of one vast screen, a grid of speakers and a series of vertical and horizontal acoustic panels engineered by Kvadrat, glides up and down in various configurations, occasionally stopping to show one of two films including a new hypnotic work that features underwater footage of a brilliant bioluminescent cuttlefish as well as a performance by ventriloquist Nina Conti.

Here, beneath the suspended cinema, visitors are encouraged to stop and sit on the specially-installed carpet; to take a moment to get lost in the experience, creating what the artist calls a ‘temporary community’. ‘The fact that it’s a free exhibition changes the perspective,’ says Oikonomopoulos. ‘The opportunities are much bigger for creating a more diverse community. It won’t just be your typical museum visitors here; unexpected types of people will come in that have no idea about Philippe or his work.’ 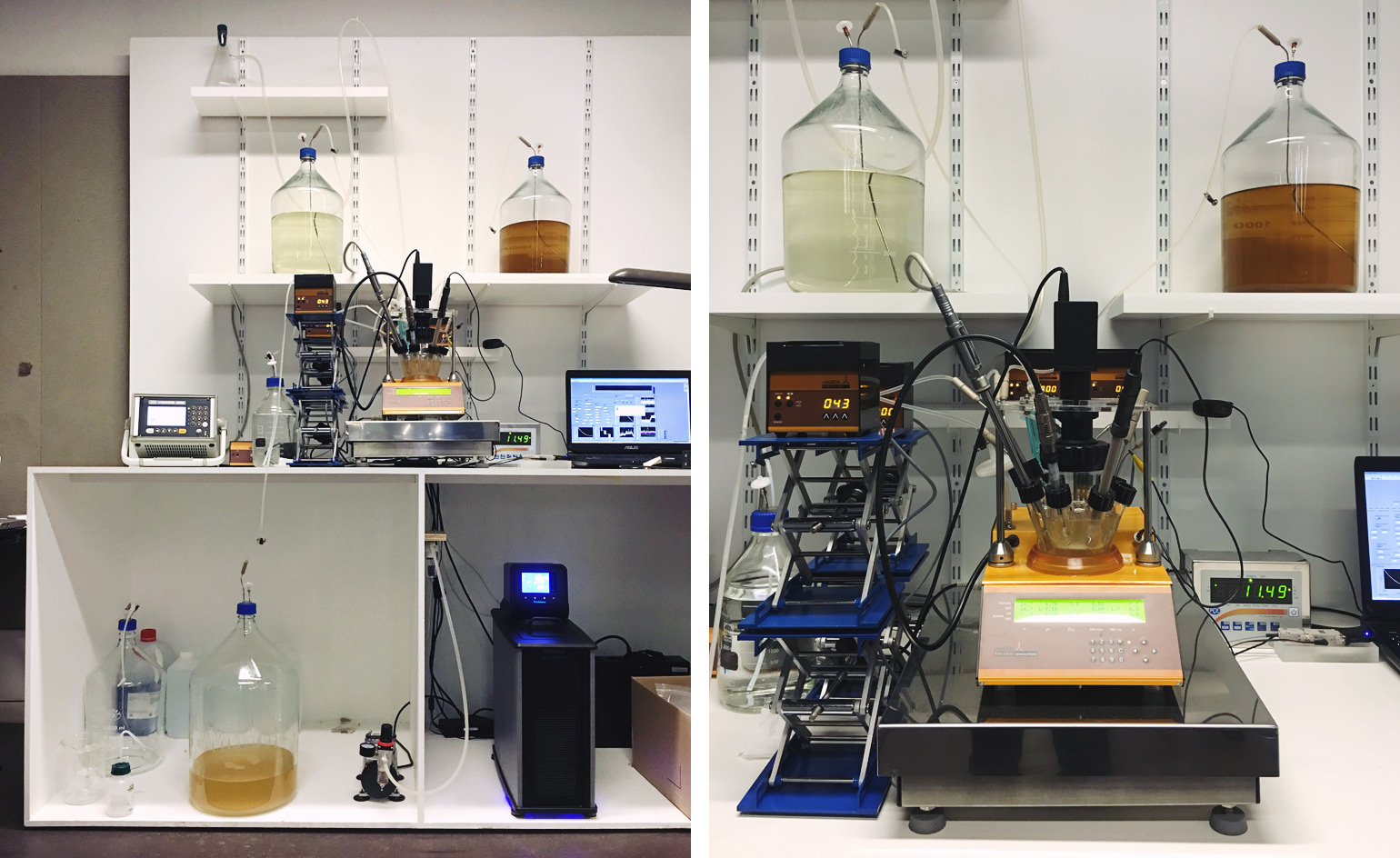 The mysterious bioreactor installed at the back of the hall was engineered by scientists Jean-Baptiste Boulé and Nicolas Desprat. Photography: Antonio Camera

Another defining feature of Anywhen is that, unlike previous Parreno exhibitions, there will be no loop of planned sequences. Instead its form will be more organic, constantly changing throughout the day and even over the course of its six-month lifespan so that every visitor has a new experience. This is, in part, due to a mysterious bioreactor that is installed at the back of the hall.

Conceived and engineered by scientists Jean-Baptiste Boulé and Nicolas Desprat, the bioreactor was first introduced by Parreno as part of ‘IF THIS THEN ELSE’, an exhibition held earlier this year at the Gladstone Gallery. Connected to sensors on the roof and within the hall, the laboratory set-up, which can be viewed through a glass screen, is fed information about changes in light and humidity. In response to the data, the microorganisms within the bioreactor create patterns that will then trigger sequences of movement within the space.

As a whole, the effect is beguiling; like being inside a disorientating collage made up of layers of natural and artificial sound and light that eradicate any sense of perspective or scale. ‘We had no idea how poetic it would be and how many surprises we would have,’ says Oikonomopoulos of the six-week installation process. ‘When there are so many elements and they finally come together the combination of them often left us speechless.’

Here, beneath the suspended cinema, visitors are encouraged to stop and sit on the specially-installed carpet; to take a moment to get lost in the experience, creating what the artist calls a ‘temporary community’. Courtesy of Tate Photography

’Hyundai Commission: Philippe Parreno’, supported by Kvadrat, is on view until 2 April 2017. For more information, visit the Tate Modern’s website