Less is more: Elmgreen & Dragset go it alone in the Grand Palais ahead of FIAC

Next month, Paris’ annual FIAC contemporary art fair will kick off with just shy of 200 exhibitors filling the Grand Palais. This past Saturday, the Galerie Perrotin booth made an early, albeit ephemeral, appearance.

All alone in the enormous exhibition hall, the unexpected vision was entirely real; it was built according to FIAC specifications using the same materials, signage included; it occupied the exact footprint where the booth will appear; and it presented actual works from Perrotin’s roster of artists – Xavier Veilhan, JR, Jean-Michel Othoniel, Jesús-Rafael Soto and others. But the twist – the very point of the half-day exercise – was that the booth itself had been realised as an artistic endeavor by Scandinavian duo Elmgreen & Dragset, who required that all the works including their own half-dozen appear in ghostly greyscale. As a continuation of the exhibition ’The Well Fair’ – in which they recreated an art fair layout to showcase their works at the Ullens Center for Contemporary Art (UCCA) in Beijing earlier this year – this installation inversed the concept by considering the fair’s absence, save for a single structure.

‘It’s stripping away the natural surroundings, this fair floor,’ Ingar Dragset tells Wallpaper* during a preview before the free public access. The booth alone, he adds, allows ‘you [to] see the fragility of the architectural structure and the simplicity of it that you don’t really think about’.

It’s true that a fair’s perfunctory format – often referred to as a fishbone grid – begs little attention, especially when compared to the often flamboyant display of art and attendees. People schmooze, post photos to social media and pretend to contemplate the purchase of a Murakami, all without necessarily realising the system underlying both the social dynamics and the commercial success. The walls, in other words, speak volumes. ‘It’s very simple materials even if it contains a lot of value,’ explains Michael Elmgreen. ‘And a gallery will maybe sell a lot of work during the fair – but you couldn’t sell ice cream in this structure, because it wouldn’t last for very long. You can see what it consists of when you have it on its own.’ 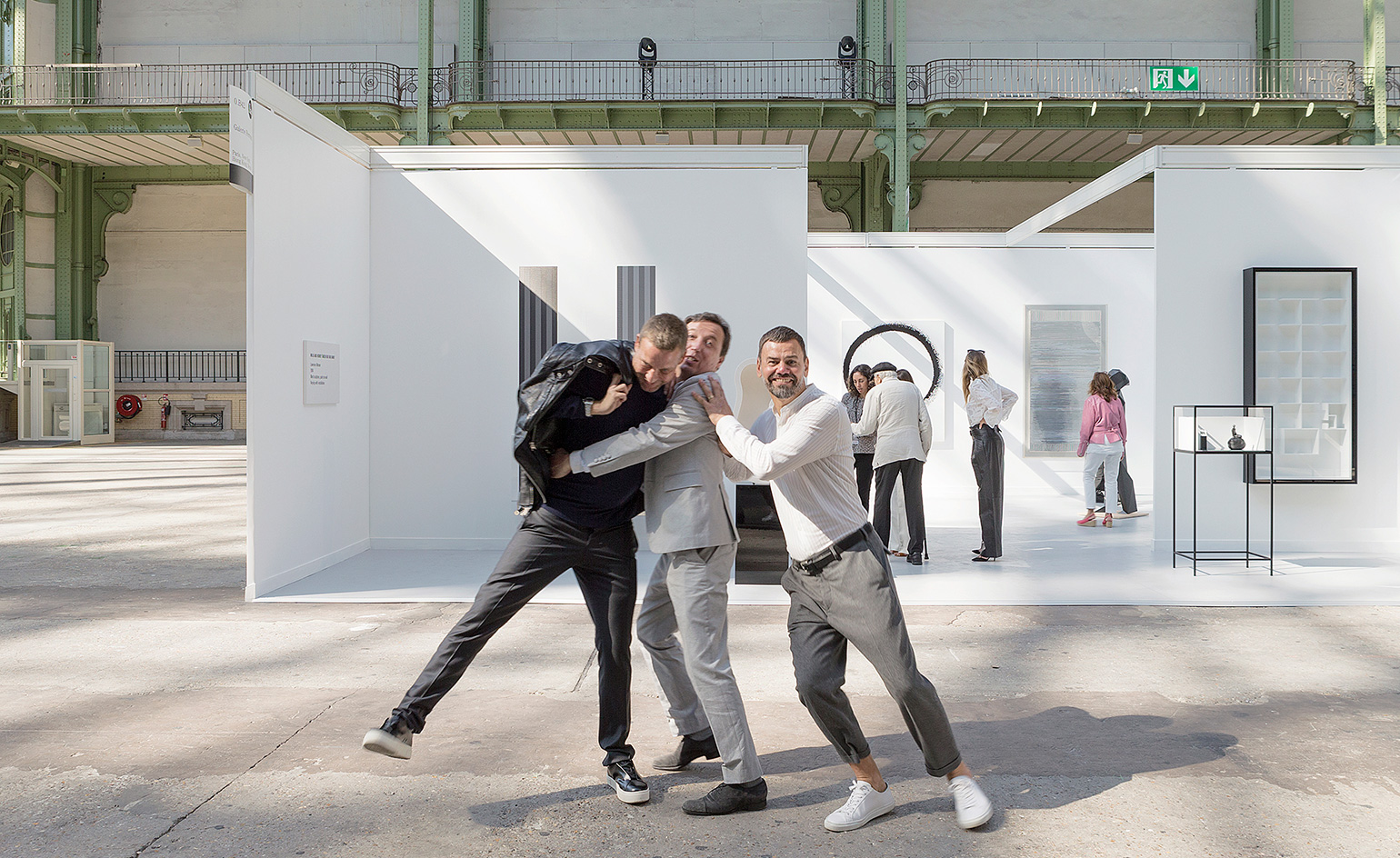 While more meta than their now-legendary Prada Marfa store simulacrum in the Texan desert or even the faux modernist airport at Plateau, Samsung Museum of Art in Seoul, the Perrotin booth tackles the same hypothesis of isolating a space of specific cultural currency to better understand how we perceive and behave around it. ‘You don’t really notice a Prada store if it’s in Paris or New York or a normal shopping environment. But if you see it in the desert, you actually start to think about what it is,’ Elmgreen continues. ‘Here, isolated, it’s actually quite beautiful and intimate, and you see the whole intention of a gallery wanting to present their artists in the best way – to make a statement. But when you have 200 statements side-by-side, of course you can’t look at it the same way.’

To size up the booth’s compact scale, roughly 100 sq m within the Grand Palais’ vast nave, is to draw comparisons to Monumenta, where an artist is invited to inhabit the space’s wall-to-wall, floor-to-glass ceiling. ‘It is also about not letting these spaces repress you. You can do less-is-more,’ maintains Elmgreen.

Being accepted to stage a one-off project inside the most revered exhibition space in all of Paris attests to a collective level of respect achieved by the two artists, as well as Emmanuel Perrotin. Approval from the Grand Palais came less than three months ago, with FIAC giving its blessing. When the fair officially opens on 20 October, Perrotin’s booth will boast the same arrangement of works, even if some have sold in the interim. Indeed, collectors were sniffing around on Saturday before the crowd descended, with particular attention paid to the duo’s self-referential maquettes, such as Study for Van Gogh’s Ear in flawless white marble, which more closely resembled a Brâncuși than an upright swimming pool. Unlike the ongoing existence of Prada Marfa, the booth’s speedy dismantling means that Elmgreen & Dragset are resigned to the idea that the project carries the whiff of ‘a rumour’. But to reinforce their objective, two official photographs documenting the ‘before’ and ‘after’ will become evidence of the undertaking – framed, of course, as art.

The booth’s compact scale, roughly 100 sq m, sits within the Grand Palais’ vast nave, drawing attention to the lack of stands around it

FIAC is on view from 20–23 October. For more information, visit the Galerie Perrotin website, or the FIAC website