Installation view of Giuseppe Penone’s Abete (2013) outside of Fendi’s Rome HQ, which is hosting an exhibition by the Italian artist

Giuseppe Penone is one of contemporary Italian art’s most respected practitioners. A radical sculptor and Arte Povera progenitor, his multi-material works – often gargantuan, harnessing wood, wax, metals, marble and leather – are dense with ecological and conversational subtext, exploring the textural interstices between man and the natural world. Though he began working in the late 1960s he remains prolific to this day, and an aesthetic lineage can be easily traced from his contemporary practice right back to his first pieces, natural interventions and sculptures created in the woods near the Piedmont village he grew up in.

It’s appropriate, then, that Penone has been chosen as the first exhibitor at Rome’s Palazzo della Civiltà Italiana – the headquarters of fashion powerhouse Fendi. It’s a gesture, the maison explains, that seeks to further its ongoing, immersive engagement with the worlds of art and culture, a logical next step after its work restoring Rome’s Trevi Fountain, and four other fountains of historical significance in the city, Gianicolo, Mosè, Ninfeo del Pincio and Peschiera. 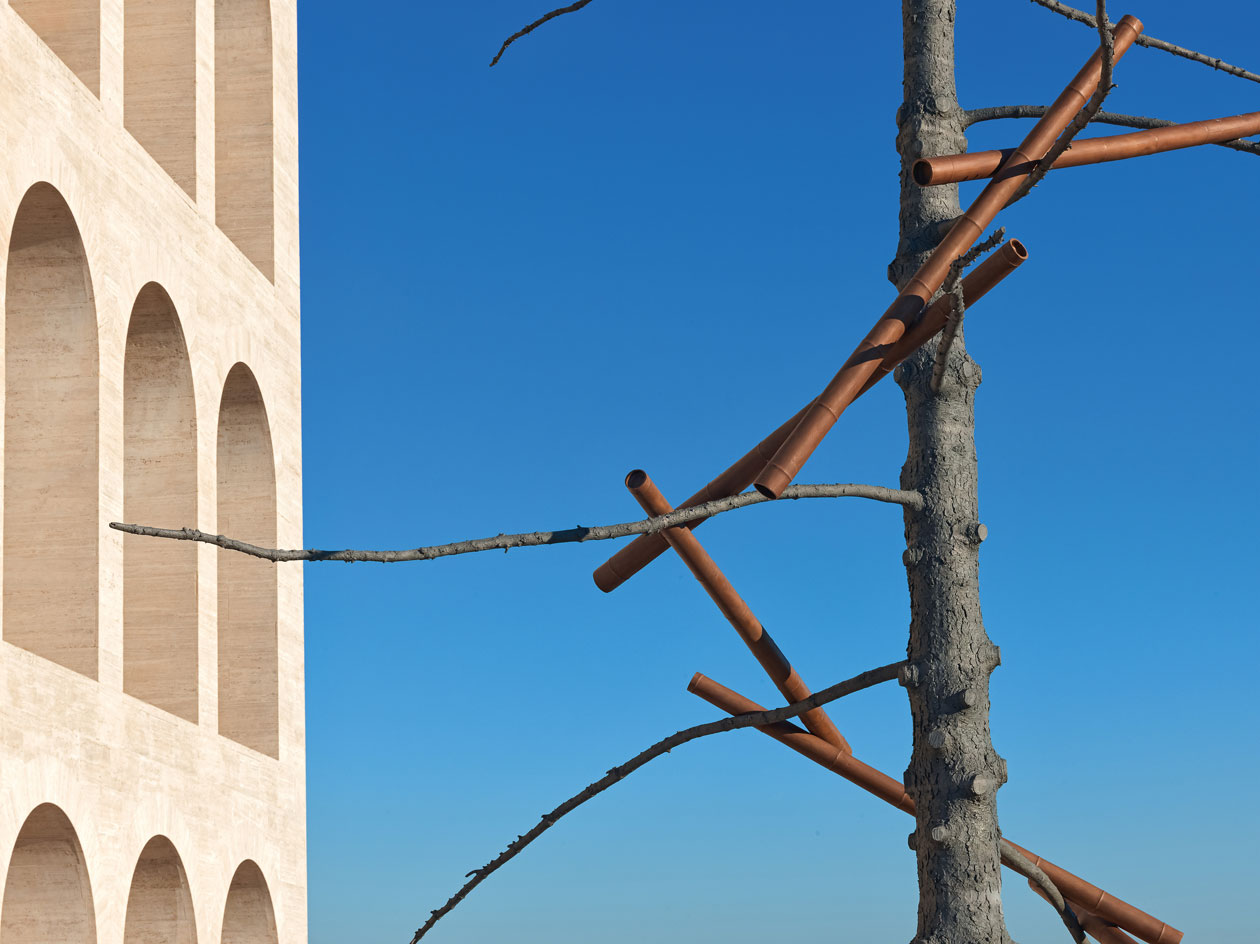 Standing outside the Palazzo – and huge in itself despite being dwarfed by the imposing icon of fascist architecture – Abete, 2013, is an eldritch amalgam of materials, a rigid series of copper pipes spun helix-like around a spindly tree missing most of its branches – a sickly symbiosis of industrial and natural. 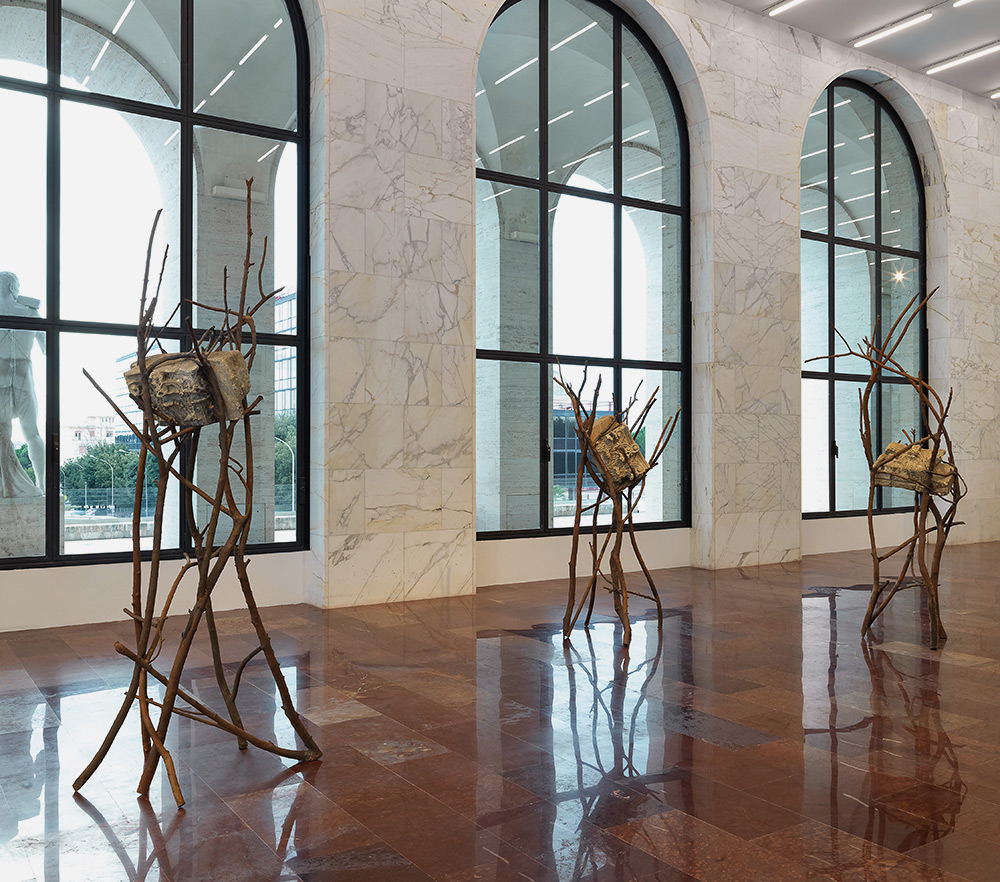 The tangible juxtaposition of natural/human biology continues inside. A sizeable pile of myrtle leaves – Soffio di Foglie, 1979–2016 – is impressed with the shape of the artist’s prostrated body, an imprint both spectral and irreverent. Foglie di Pietra, 2013, comprises three simple branch structures, supporting chunks of classical masonry.

More impressive still are the collections of wooden sculptures in the second and third rooms, huge trees with branches shorn, either positioned on plinths, half-painted, hollowed out and laid horizontally or, in the case of Nel Legno’s gargantuan block of larch wood from 2008, dissected so as to display the core of the tree. It’s delicate, even anatomical, redolent of the kind of human capillary systems seen in surgical collections. 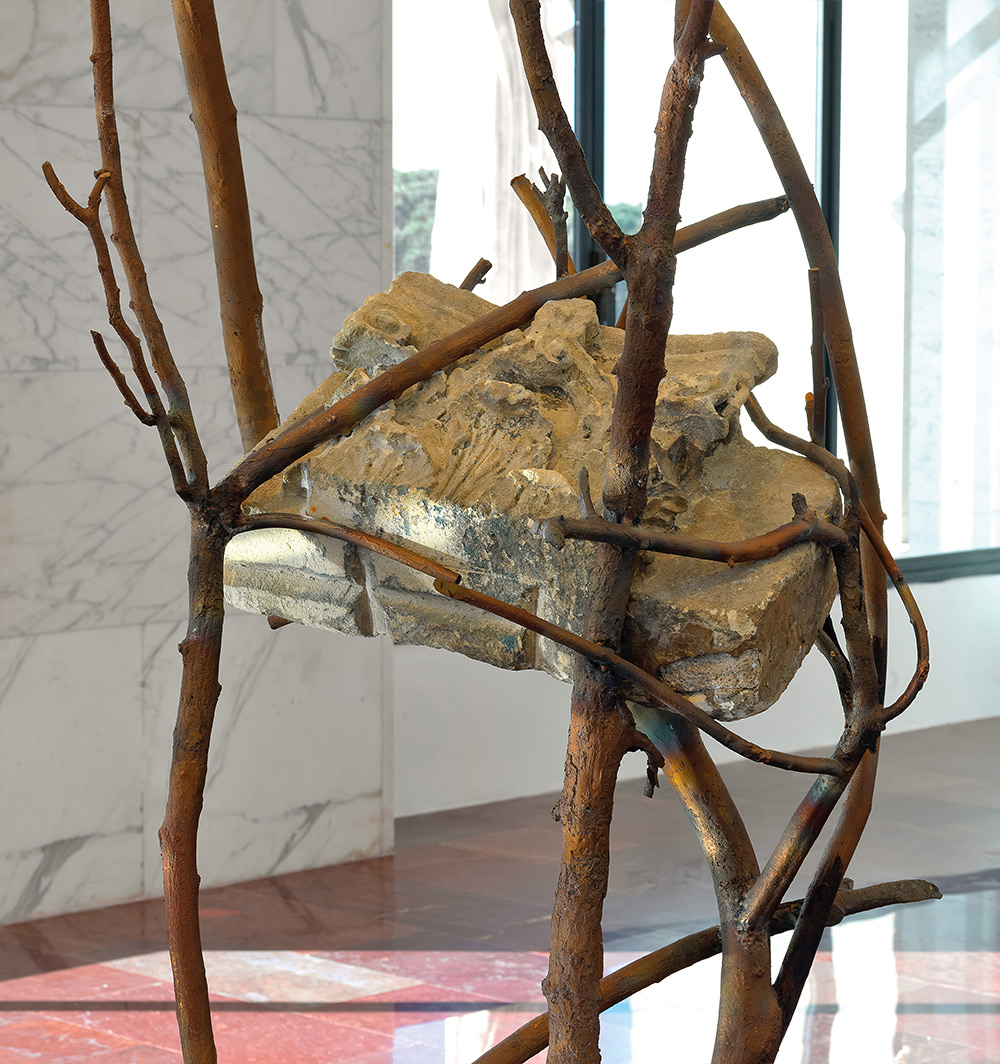 ‘Works change according to the place in which they are set, they dialogue with the space and transform its perception,’ says Penone of his work. ‘Setting my works, that are born from a need of personal intimate cohesion with the reality of matter, in a place that, on the other hand, is born from a rhetoric vision of materials and culture, highlights the contrast between necessity and demagogy.’

‘The exhibition’, explains Fendi CEO Pietro Beccari, is a celebration of Penone’s predilection for ‘sublime savoir-faire and continuous dialogue between tradition and innovation’ – values shared by the luxury label.

’Matrice’ is on view until 16 July. For more information, visit the Fendi website