Despite being good friends since college, and sharing a studio for a time, Cologne-based artists David Ostrowski and Michail Pirgelis rarely exhibit together. ’We each take on extremely different contextual issues in our work,’ Ostrowski explains, ’and our working methods couldn’t be more different.’ A joint exhibition in Sprüth Magers’ Los Angeles outpost proves that despite these perceived differences, a coherent conversation between the two can be heard loud and clear. (No friendships were harmed during the process.)

It’s only when the works are seen side by side that their visual affinities come into focus. Ostrowski’s deeply abstract canvasses analyse the nature of painting, aiming to reduce it down to its bare bones. Blocks of black, grey and white are punctuated by stray, seemingly nonchalant gestures of vibrant spray-paint. Meanwhile, Pirgelis’ enigmatic sculptures – that begin life as scrap metal in Californian aircraft boneyards – look like carefree groupings of found materials, untouched by an artists’ hand. On closer inspection, both sets of works are impeccably detailed, highly considered and deceptively complex. 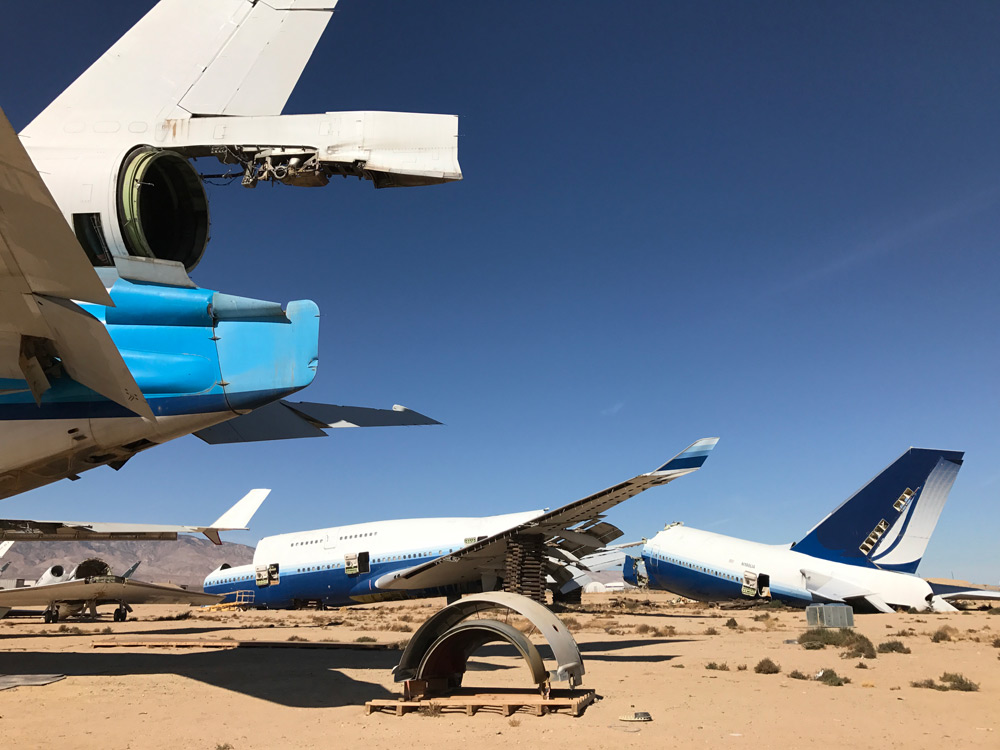 One of the aircraft boneyards in the Mojave Desert, where Pirgelis sources his materials from. Photography: Michail Pirgelis. Courtesy of Sprüth Magers

The ’simplistic’ collections belie the immense conceptual effort behind them: their material interrogation, and the desire to use as few traditional artistic techniques as possible. ’I stopped working with oil paint because it offered too many possibilities,’ Ostrowski explains. ’Spray paint, on the other hand, forces me to make constraints; you have to work quickly, and it’s nearly impossible to correct mistakes.’

He adds: ’There’s only a Plan A, almost never the possibility of a Plan B. The first shot counts. Too much action is overrated.’ It’s all down to ’how you can exude the highest possible emotions and power with the lowest possible means.’ 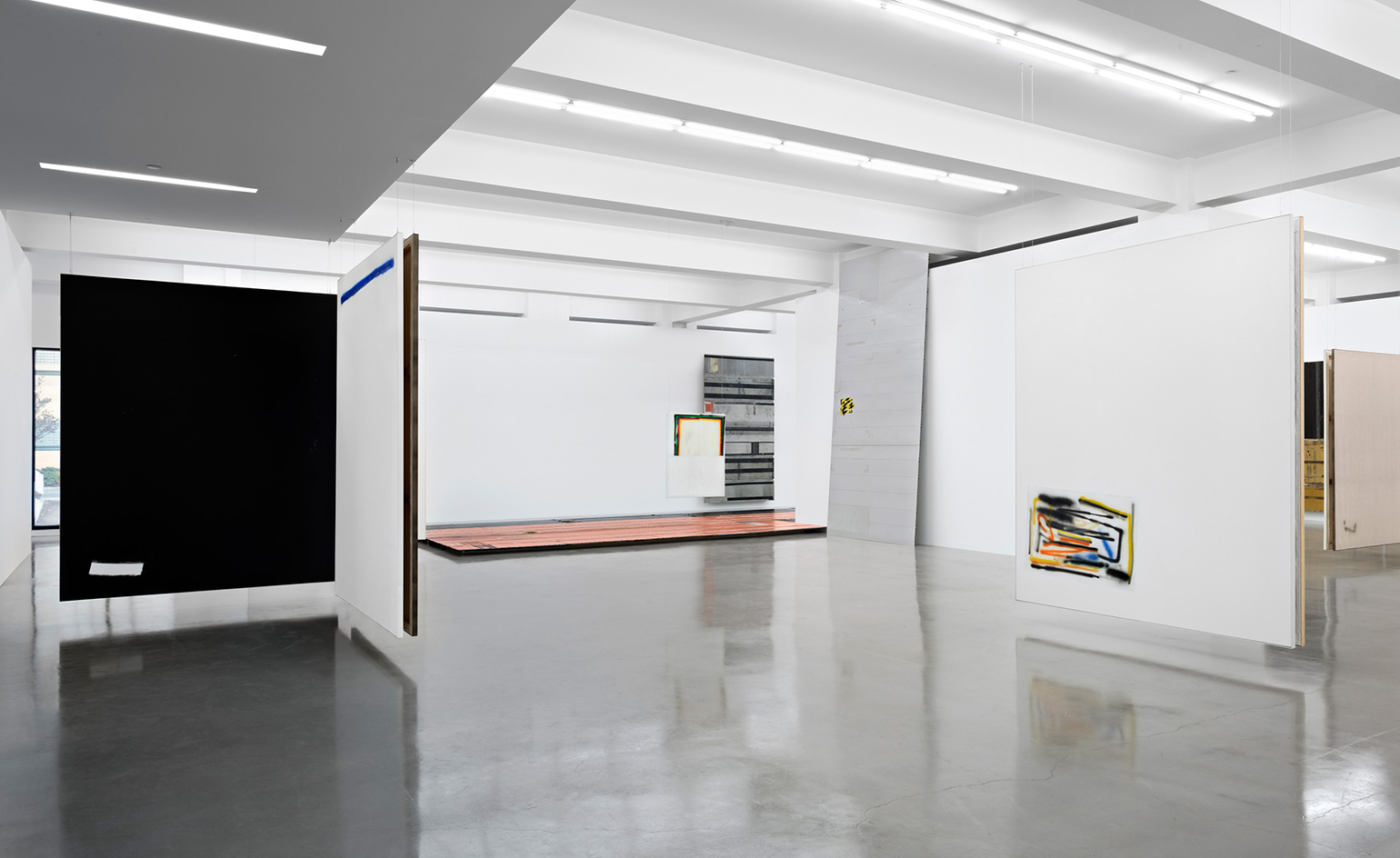 The two artists’ work seemlessly together in their joint showcase at the Los Angeles gallery. Courtesy of Sprüth Magers

This hints towards a philosophical notion that paints a broader picture than Ostrowski’s physical works. He is aiming at a new form of minimalism that goes beyond much of what we’ve seen before. Instead of using the idea of ’simple’, he’s interested in ’nothingness’ – a kind of ’ground zero’. Perhaps why he works with reductive, inexpensive materials and processes - they are ’less laden with information’.

A similar sense of information underload can be seen in Pirgelis’ sculptures. His enormous plane skeletons are dehabitualised when removed from their industrial, scrap yard setting. In their new gallery home, they become carte blanche objects, unburdened by their previous purpose.

This being said, Pirgelis is arguably less strict than Ostrowski in his commitment to ’nothingness’ – he is prepared to embellish the raw object to achieve a desired finish. This is largely down to the unworkable attributes of his chosen materials. ’Airplanes are not made to be disassembled,’ he explains. ’It’s actually quite rare that I come across an element that makes sense without any intervention whatsoever – but that is, of course, a nice fantasy.’ He might peel off paint to uncover rivet drawings, or remove a few letters of branding, but Pirgelis aims to keep his artistic meddling to a minimum in order to maintain the power and momentum held in the original object. 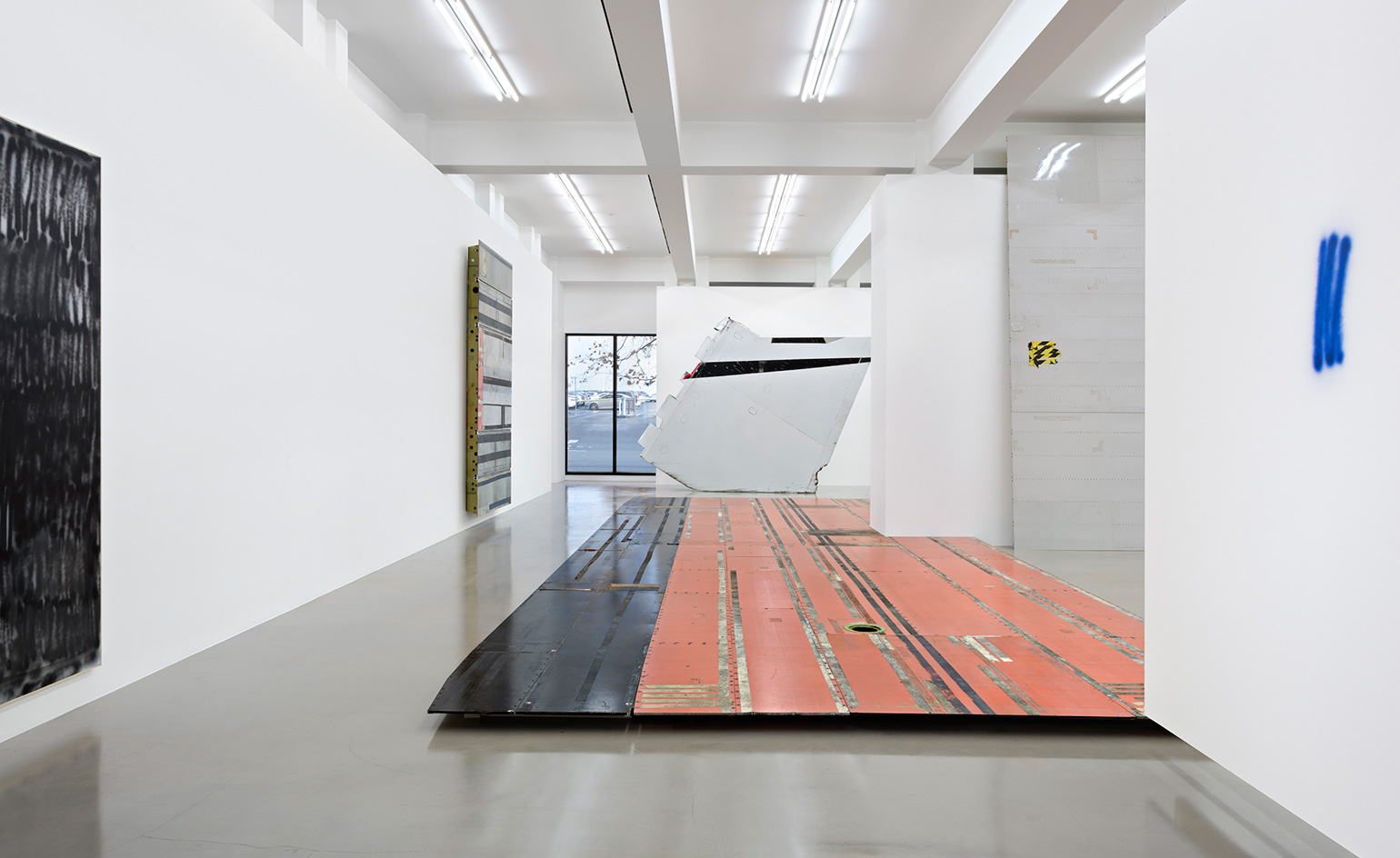 Their materials and methods might differ, but there’s an atmosphere of warmth and authenticity that pervades both sets of work; a lack of sterility that minimalist exhibitions often stuggle to avoid. Each piece is lightened by chance encounters. Specks of dirt here and there, the light trace of a vanishing footprint on the edge of a canvas, ghosts of masking-tape across a paintings’ corner. Ostrowski encourages these mistakes; biographical traces that take a work from beautiful to brimming. These smudged fingerprints bare resemblance to the weathered, dust-blown textures of Pirgelis’ plane-shells. Pock marked surfaces, wind-punched edges. The errors that other artists would spend hours polishing off or covering up, these artists celebrate.

But to break the rules you first must learn them. These artists have clearly studied a history of artistic movements, if only to not fall into them. Their work is almost impossible to categorise. It can’t comfortably be described as minimalist, abstract, or even readymade. Ostrowski and Pirgelis are renegades, challenging themselves, and their audiences, to welcome a new, indefinable artistic moment.

Confounded by the gallery’s position in oversaturated West Hollywood, ’Nothing Happened’ is refreshing, but undeniably challenging. (It wouldn’t be a Sprüth Magers exhibition if it wasn’t.) Instead of ’nothingness’ embodying what we think it means – an empty vacuum or a negation of ’something’ – Ostrowski and Pirgelis are redefining it. They make it an active word; an occurrence, a weighty pause to dwell on. They seem to be saying, ’Nothing happened. And this is what it looks like.’

Since 2003, Pirgelis has made frequent visits to the aeroplane boneyards of Arizona and California. Photography: Michail Pirgelis

’Nothing Happened’ is on view until 23 December. For more information, visit the Sprüth Magers website