This new house in Oxford is made by combining two adjacent Victorian semi-detached properties. While the houses’ front facades were left almost intact, the changes are visible from the rear

London-based Delvendahl Martin Architects have tastefully converted two Victorian semi-detached houses to form a single, bright and spacious 350sqm family home in central Oxford, completed this summer. With minimal intervention to the front façade, the drama is reserved for the rear, where a smart two-story extension creates a strong visual link between the two, ’making the building look like one house as it was originally intended,’ say the architects.

Internally, a central feature staircase, clad exclusively in stained timber, is positioned perpendicular to the party wall, creating a lynchpin for the merged layout. ’The existing symmetrical arrangement gets thus rotated to achieve a continuous flow of spaces throughout each floor,’ explain the architects. The ground floor encompasses the open plan living/kitchen/dining spaces, with three bedrooms and a bathroom on the first floor, and a master bedroom, bathroom and office/ studio space on the second. 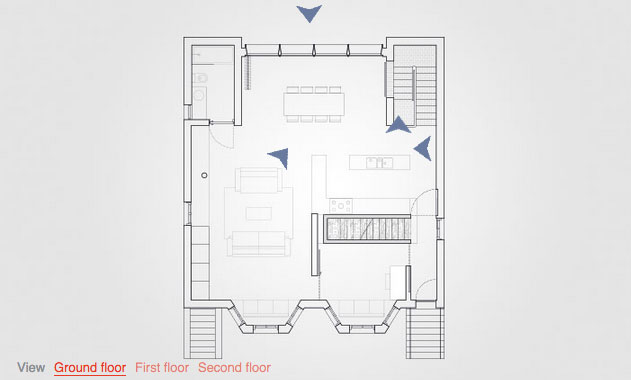 Expressed as solid brick bookends sloping to frame a recessed central bay, the extension is a clever ploy allowing plenty of daylight into the open plan living area. Constructed from bricks reclaimed from the demolition process, the ’outriggers’ accommodate ancillary spaces and a second stair that negotiates the level difference to the lower ground floor level.  Accessed from the open-plan living area, the brick stair core appears pleasingly open to the elements, with a frameless glass lid encouraging further daylight in. A self-contained lower ground floor offers an additional open plan living/kitchen/dining space, two bedrooms and a bathroom.

Reinforcing the notion of unity, the central bay spans internally the formerly-separate structures and features a contrasting palette of materials, including a darker brick that forms a loggia at garden level, and floor to ceiling glazing at upper ground level. Anodized aluminium fins provide a degree of shade and mitigate overlooking to neighbouring properties. The glazed screen panels are openable, giving the impression of an elevated terrace with views over the two rear gardens, where rather playfully the existing dividing garden wall has been retained.

It is a game of two halves, where bold gestures have transformed these two houses into an impressive family home.

A central feature staircase, clad exclusively in stained timber, is a key element of the new design

The staircase sits perpendicular to where the old partition wall was meant to be, ’pinning’ the two houses together

Around the staircase void, on the top floor, is a study area, leading to the master bedroom beyond

The raised ground level contains the house’s main open plan living area, which was designed to receive plenty of daylight

That area is flanked on the garden’s side, by two brick extensions made of reclaimed material from the demolition process; one of them includes a secondary staircase linking different levels of the house

The kitchen and dinning areas are orientated towards the garden views

Different textures of timber - from light coloured and natural, to dark stained - create a rich and warm interior