Planned vision: Arborea offers up clues to its architecturally ambitious past as Mussolinia

Arborea, formerly known as Mussolinia, was founded in 1928 to emobdy the values of Il Duce’s Facism The pumping station, designed by Giovanni Battista Ceas in a neoclassical style, helped drain the malarial marshes of south-western Sardinia. Photography: Oliviero Olivieri

The phrase ‘Fascist new town’ brings up a few associations. You might picture ruthlessly centralised neoclassical buildings, formal axes, some haranguing statues and eagles, lots and lots of marble. You wouldn’t necessarily imagine palm trees, cottages, canals, a Gothic church, bustling cafes on a piazza and the smell of manure. That is, you wouldn’t see Arborea, a new town founded in Sardinia in 1928, and possibly better known – if known at all – by its original name, Mussolinia. It is the subject of Oliviero Olivieri’s photography series, featured on these pages.

This was the first of several new towns built on drained marshland in Mussolini’s Italy, a project that once attracted widespread admiration. For instance, in his popular book Town Planning, published at the start of the Second World War, Thomas Sharp drew attention to the ‘half-dozen boldly planned new towns’ of Fascist Italy and suggested that they might be a possible model for post-war Britain – in a democratic way, of course. More recently, Jonathan Meades praised the eclecticism and experimentation of interwar Italian architecture in his BBC film Ben Building. The sharp contrast with the officially prescribed classicism of Nazi Germany was so pronounced, he argued, that it supported the questionable view that the Third Reich was so different from Fascist Italy that it didn’t even merit the term ‘Fascist’. Certainly, the Nazis never got round to new towns, although they planned a few – folksy places, designed to colonise the newly acquired territories of Poland and the Soviet Union. Arborea, or Mussolinia, reveals itself to be something rather similar. 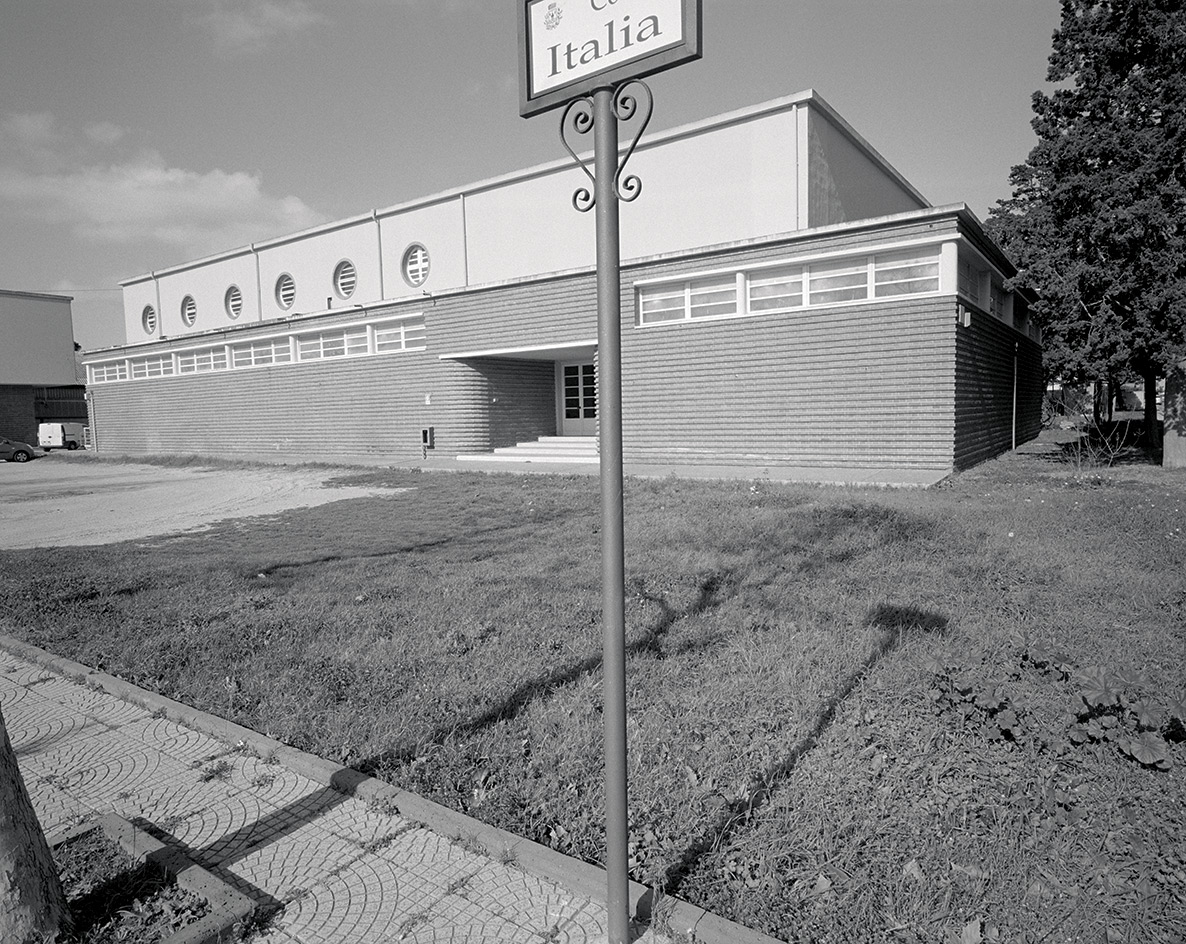 The Casa del Balilla (House of the Fascist Youth) is a long, modernist building that stands next to the Casa del Fascio; it is now Arborea’s sports hall

The most famous Fascist new town is not in Italy at all, but in Eritrea, then part of newly conquered Abyssinia. The much-photographed Asmara was designed in the late 1930s by designers from the rationalist school of Italian architects – inspired compromisers between futuristic modernism and classical heritage. Mussolinia was part of an earlier, less violent, but similarly clear process of colonisation within the Kingdom of Italy itself, where Sardinia was always somewhat apart, linguistically and culturally.

The project, begun in the 1920s, of draining the malarial marshes in the south-west of the island was undertaken by settlers from north-east Italy, rather than Sardinians. In theory, settling these pestilent lands and making them productive would help Mussolini achieve his much-vaunted goal of autarky, economic self-sufficiency. You notice something is different when you drive from the nearest railway station, at Marrubiu, to the new town: suddenly the roads are rigidly straight, running alongside canals in rich arable land, in the shadow of harsh, bare mountain ranges. On that level, the project worked.

The architect of Mussolinia, between 1928 and 1939, was Giovanni Battista Ceas, a critic and historian as well as a designer. Accordingly, there’s very little trace in the first clutch of buildings of the more modernising trends in Fascist Italy, such as the monumental dreams of Futurist architects like Antonio Sant’Elia or the cold rationalism of Giuseppe Terragni. A hospital, a school, a town hall and a police station are in an invented vernacular bearing little resemblance to Sardinian architecture. Rusticated stone takes up most of the lower exteriors, with warm, yellowish render on the upper levels; roofs are pitched and ornamentation is limited to gestures, like growling faces above the windows of the small shopping parade. But most of Arborea is cottages, one or two of them rationalist but the majority like little Roman villas, with graffito cherubs and rural-neoclassical details. Aside from shrines to the Virgin Mary, the only statue is a bust of the engineer of the drainage project, Giulio Dolcetta, his face aligned perfectly with a cypress tree.

Cross a pretty concrete bridge over the canal and you’re in the main piazza. It’s symmetrical, but subtly so, with the buildings on either side evenly spaced if » not identical. In the middle is a Gothic church, with a tower in a free style somewhere between mild art nouveau and Venetian. Inside is one of few clues to the date of the town’s founding, in a very interwar, muscular scene of Jesus and the disciples that is painted behind the altar. Next to the church is a disused cinema, in a similar, eclectic style, looking more like an architecturally ambitious barn. On the other side of the main north-south road (now known as via Roma – the streets originally had numbers, not names) is a grain silo complex. One part is in Ceas’ neo-Roman manner, with the other in a more dramatic industrial concrete. 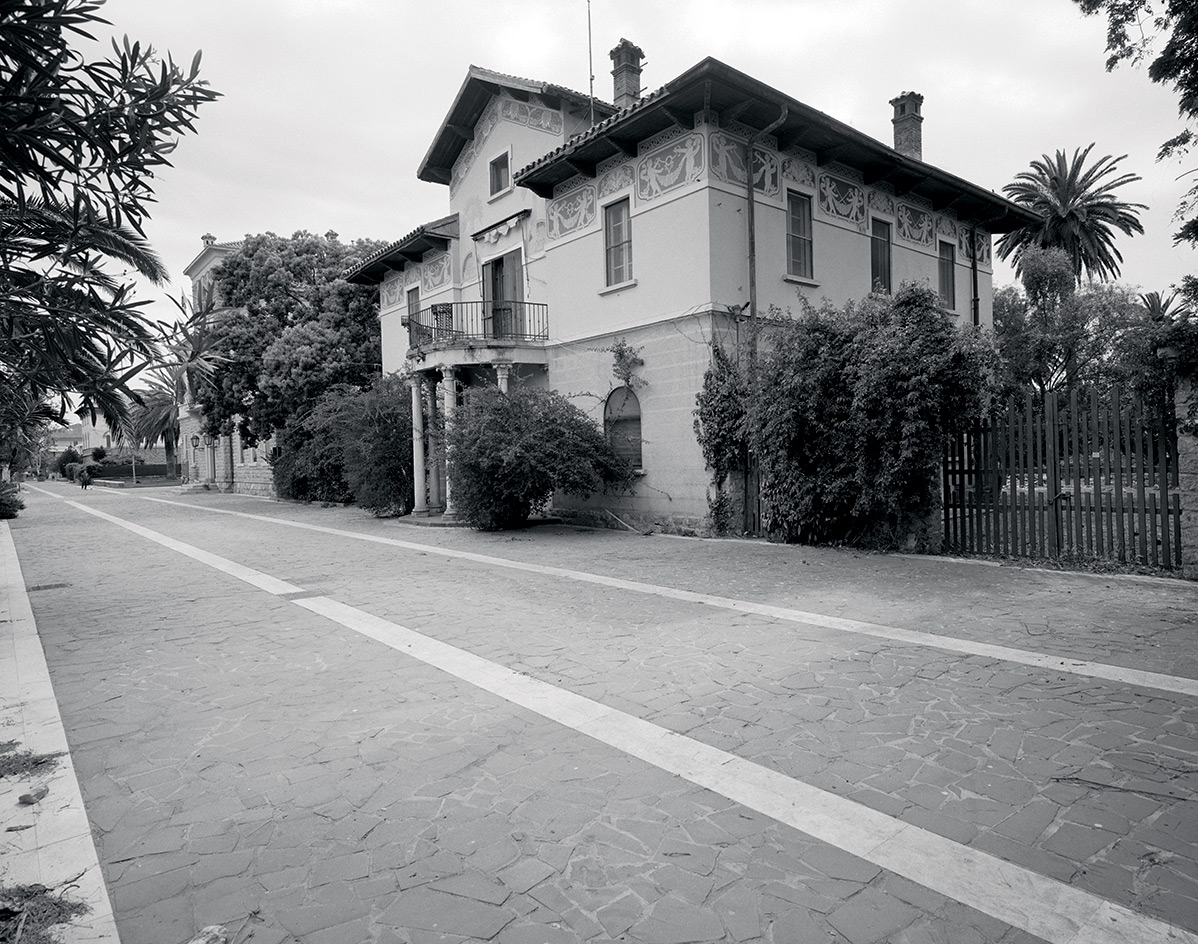 This towering silo is one of three buildings that make up Arborea’s skyline, alongside the church and the Casa del Fascio (House of the Fascist Party). Leave the square and walk towards the edge of town – not hard to do, as you can cross Arborea east to west in ten minutes – and you’ll find a more confident architecture, as Ceas suddenly switched towards rationalism. The Casa del Fascio, of 1934, is a laconic assemblage of cubic volumes in concrete and brick, stepping upwards to a gallery and a tall concrete bell tower. These three punctuations on the skyline sum up the values the new town was meant to embody: Fascism, Catholicism, autarky.

After Mussolinia was renamed Arborea, in 1944, it ceased to be an architectural showcase, offering up the same suburban buildings of any small Italian town. The exception is the Hotel Le Torri, which has a strange, monumental, neo-rationalist style, with looming square towers. In the lobby is a bound collection of the local paper from the 1930s, Brigada Mussolinia. It reveals the sort of place the town once was, and not just in articles on the colonisation of Abyssinia and Libya, on royal weddings, or in praise of autarky and Italy’s German ally. ‘The Story of Mussolinia’ shows the main square stark and imposing, devoid of the palm trees and benches that give it life today. The Casa del Fascio is pictured, Il Duce speaking from the gallery beneath the elegant, modernist campanile. Without these artefacts – and without the clues of the strange, un-Sardinian landscape and the gridiron imposed upon it – you might never guess that Arborea was once Mussolinia.

The Casa del Fascio (House of the Fascist Party) showed a shift towards modernism in Mussolinia with its sleek bell tower; it was opened by Mussolini in 1938

Later parts of the pumping station were designed by Giovanni Battista Ceas in a more rationalist style, as the architecture of Mussolinia shifted towards the contemporary

The school, on the main square, followed Ceas’ invented vernacular for a number of public buildings, with rusticated stone on the lower part of the exterior

View from the rooftop of the Sassu water pump station