’It’s not every day that Paris acquires a new cathedral, a new library, a new auditorium and a new bilingual school,’ said Paris’ mayor Anne Hidalgo at the recent inauguration ceremony of the city’s Russian Orthodox Spiritual and Cultural Centre.

The monument is located on a highly sensitive UNESCO site in central Paris, steps away from the Eiffel Tower, the banks of the Seine and the Quai Branly-Jacques Chirac museum. ’The silhouette of Paris has been redrawn,’ says its architect, Jean-Michel Wilmotte.

In designing the new centre, he had three principles: to respect the canons of the Russian Orthodox Church, to incorporate the centre seamlessly into a densely-built Parisian neighbourhood and to create a contemporary building inspired by medieval Orthodox churches, characterised by their sobriety.

’There was no question of creating a caricature,’ said Wilmotte. ’It is essentially an urban project, one that prolongs Avenue Rapp across to the Seine, and reveals the [listed] Palais de l’Alma, previously hidden from sight behind the old Méteo France [national meteorological] building.’ 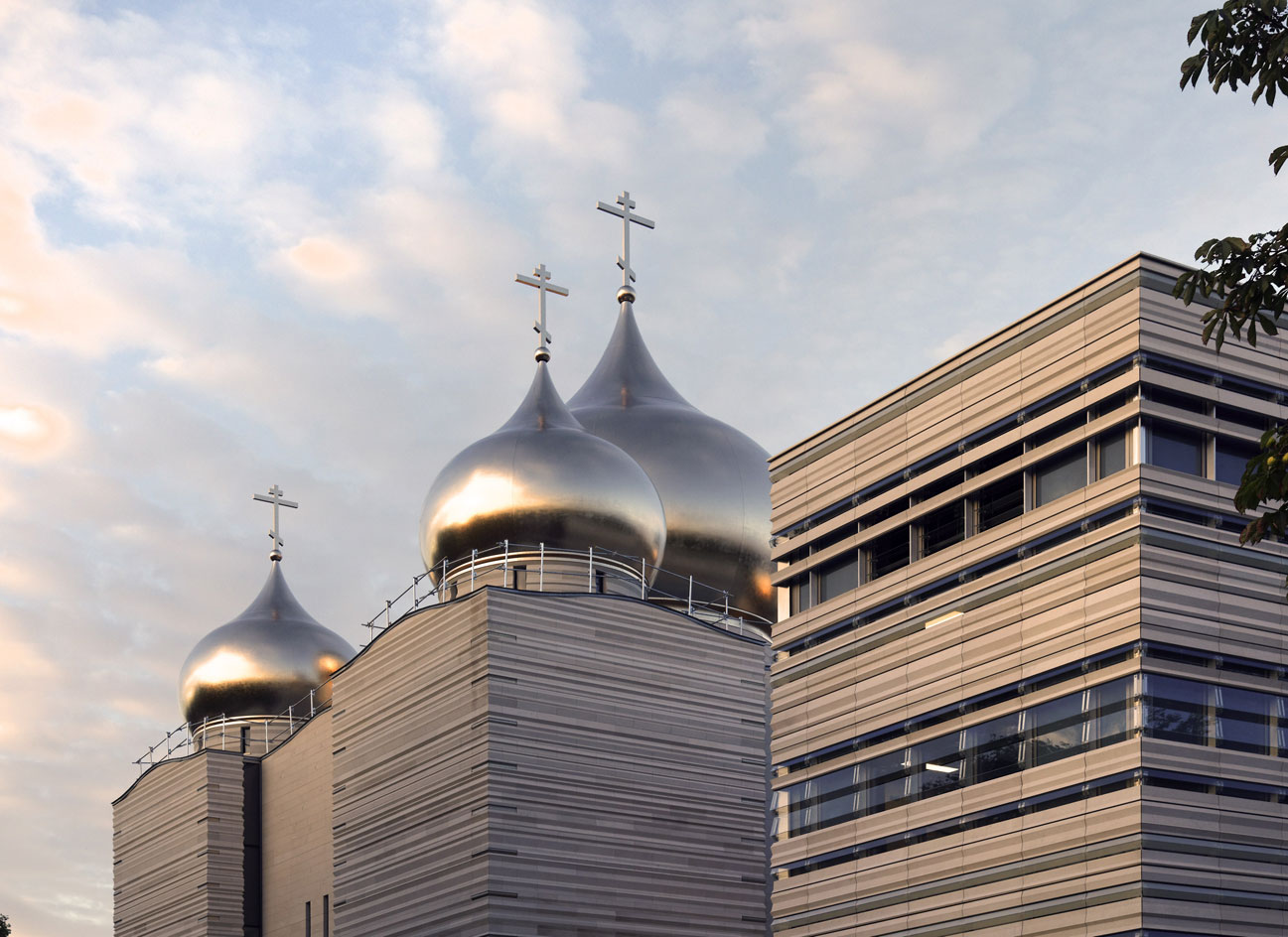 These newly open grounds are landscaped by Louis Benech with Russian species, including Mongolian linden trees, red and yellow Siberian apple trees and, in front of the Cathedral, Tartarian maples.

The centre’s minimalist volumes are orchestrated horizontally in cream-coloured Massangis stone from Burgundy, the same used for the steps of the neighbouring Eiffel Tower, the Jena Bridge and the Musée National d’Art Moderne, delicately blending it into its surroundings. The four buildings that comprise the complex are clad in 12,000 stone modules, constituting dynamically faceted facades that play with light and shadow.

The centre’s focal point is the Sainte-Trinité Orthodox Cathedral with its crowning glory, five gold onion domes representing Christ and the four evangelists, Matthew, Mark, Luke and John. Wilmotte designed these in collaboration with the Patriarch of Moscow.

The gold-coloured domes are a technological and artistic tour de force. Wilmotte insisted that they be completely smooth, rather than faceted, as is their usual means of production. It was decided to use composite materials more common to the aeronautical and naval industries. Multiplast, a company in Vannes that specialises in producing catamarans and the world’s first solar powered airplane, fabricated the domes, a world first in building construction.

Not only are they perfectly round, but this technique also makes them considerably lighter. The central dome is 11m in diameter and weighs 8.2 tonnes, as opposed to the 42 tonnes it would have weighed if traditionally produced; the smaller ones are 5.8m in diameter and weigh just 2 tonnes. It took 90,000 leaves of 24 carat gold to cover them in a process that lasted three months.

With the building permit secured, the work was completed in just three years. ’The quality of work has been exceptional throughout. It is, it can be said, a work of art,’ concludes Wilmotte. ’Everyone involved can be very proud.’

The monument is located on a central Paris UNESCO site, a fact the architects took into account when choosing the design and materials. Photography: Laurent Zlyberman, Agence Graphix​

The centre’s volumes are clad in cream-coloured Massangis stone from Burgundy, the same used for the steps of the neighbouring Eiffel Tower, the Jena Bridge and the Musée National d’Art Moderne. Photography: Augusto Da Silva, Agence Graphix