Past the front door, only a couple of the original front rooms remain; one used for a study, the other a guest bedroom. ’The house fits in with the period streetscape. You’re not really aware of what’s going on behind the timber facade,’ says architect Feras Raffoul, director of FGR Architects. ’Our clients had become attached to the period home, even though it had its shortcomings,’ he adds.

FGR Architects virtually created an entirely new house behind the period facade. The contemporary ‘addition’ includes generous glazing at both the ground and first floors to take advantage of the garden aspect and generous light. Pivotal to the design is a lap pool and the double height canopy that soars to 6.5 m in height. Complete with an open fireplace, this innovative white concrete wall not only creates shelter, but also doubles as a projection screen (a video unit is concealed in the overhang outside the kitchen). ’Having the generous canopy also allows you to borrow views into a neighbouring garden,’ says Raffoul, who was conscious of wanting to create a sense of space within the 500 sq m site. 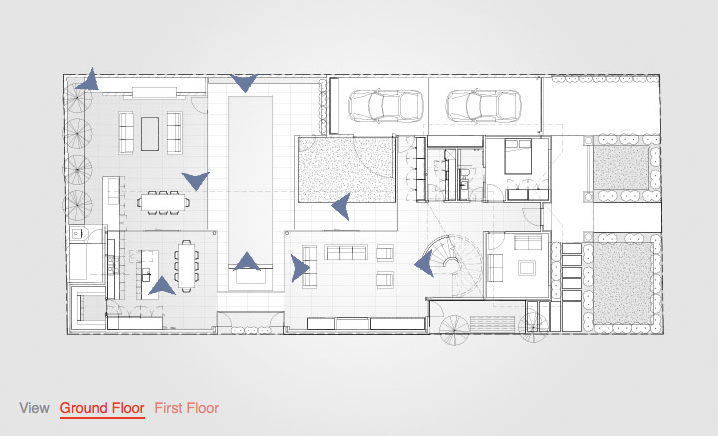 While the house is predominantly rectilinear in form, the liquid-like staircase at the front of the house separate the past from the present. ’The staircase softens the geometric lines as well providing an unexpected moment when you first enter the home,’ says Raffoul.

Raffoul used the swimming pool as a means to delineate spaces at ground level. On one side of the swimming pool is the lounge, while on the other is the open plan kitchen and dining area. However, wherever one stands, there are unimpeded sight lines to the garden and swimming pool. In fact, there are few homes designed by FGR Architects that don’t feature a swimming pool. ’I love the way water animates an interior, with sunlight reflecting on the ceilings,’ says Raffoul.

The first floor also features generous floor-to-ceiling glazing. Featuring a main bedroom, walk-in dressing area and lavish ensuite bathroom that takes advantage of the leafy neighbourhood, there’s a sense of residing in a five-star hotel. And while the owners don’t presently have children, when they do eventually arrive, there’s more than sufficient bedrooms for them to chose from, each one enjoying the same quality light and outlook as the couple presently does.

The original period facade is pretty much all the architects kept from the existing structure. Inside, now the house is a bright and open, thoroughly modern home.

A double height canopy soars to 6.5 metres in height and spans over the house’s terrace and garden

While the house uses predominantly rectilinear shapes, a curvaceous, liquid-like staircase in the front room separates the past from the present

Inside and outside become one, due to the house’s large openings and generous glazing. The architects wanted to make the most of the garden and the property’s views.

The sculptural staircase leads up to the house’s first floor, which hosts a main bedroom, walk-in dressing area and ensuite bathroom

On one side of the pool is the lounge, while on the other is the open plan kitchen and dining area