The richly textured house is designed in three zones, from a nature-inspired ground level, through a more folksy first floor and up to the minimalist top level. Photography: George Messaritakis

In an architecture world that is so often dominated by a search for purity and minimalism, ‘collage’ feels almost like a dirty word, but this hasn’t stopped Konstantinos Pantazis and Marianna Rentzou of Athens-based practice Point Supreme Architects (Architects’ Directory 2015) from masterfully uniting seemingly disparate elements into a coherent whole that brims with personality.

‘Collage in architecture gets bad press, because it often happens for its own sake – for fun. We take architecture much more seriously’, says Pantazis. ‘We hope that our work does not get associated principally with either collage, or colour; an easy misconception. We prioritise the sensorial above all and use collage as a way to create different experiences. So the spatial narrative is much more essential than the collage.’ Nowhere is this more evident than in the partners’ (both in work, and life) own home in the Greek capital. 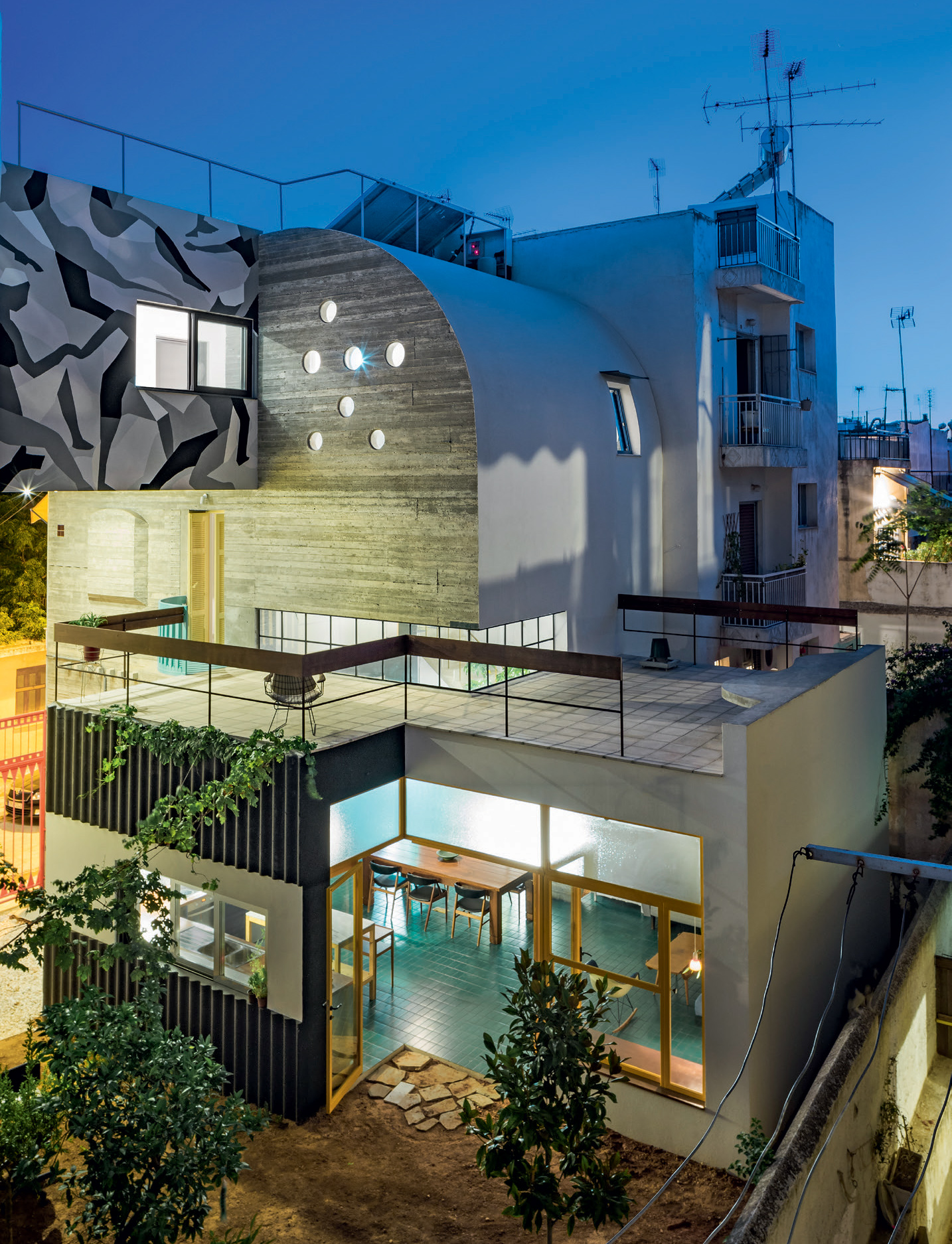 Petralona, an urban area at the foot of Filopappou Hill, has become increasingly popular for its proximity to the city centre and its friendly, neighbourhood feel. The couple spotted a redevelopment opportunity in a modest 1955 single-storey house that offered everything they wanted – a central plot with a garden and the chance to redesign. The pair were fresh back in Greece from studying and working abroad – most recently at OMA in the Netherlands. In Rotterdam and London we lived in three-storey houses with gardens, and wanted to bring that quality to Athens,’ says Pantazis. The couple’s distinctive approach and passion for creating architectural experiences becomes evident from the street. ‘Petralona House is in fact many houses brought together; the space creates a narrative,’ says Pantazis. The front facade is clearly divided into horizontal zones, he explains. The ground floor is intrinsically linked to nature. The first floor, with its old-fashioned awning, window and balcony, is heavily influenced by traditional Greek architecture. The top floor is a simple white, cantilevered box, vaguely reminiscent of a white Le Corbusier villa.

‘The zoning was a result of the composition and the experience,’ says Rentzou. ‘From the earth, you move to a more folky feel, and end up in the abstract. It also has to do with density. You start from a fairly rich environment on the ground level and gradually arrive at something very minimalist at the top.’

Keeping the existing building’s footprint, the pair completely gutted and opened up the ground level, building upwards to create an impressive, triple-height, open-plan living, dining and kitchen area. The utilitarian kitchen’s large window and adjacent glass wall seamlessly connect to the garden. The blurring of boundaries between inside and outside is reinforced by more windows and views through the space, as well as a Brachychiton tree planted in the middle. It sits by the sculptural steel staircase, which was handmade by Rentzou’s father, a farmer who is adept at metalwork. ‘He doesn’t read drawings,’ Rentzou explains, ‘so we had to make a one-to-one scale model so he could create the metal parts from there.’

The tiled floor gives way to light-coloured timber veneer towards the front, marking an area the architects call their ‘Japanese room’. It currently serves as a child’s bedroom, but will eventually be closed off with Asian-style paper walls to become a study or guest room.

The first floor features a light green bathroom and a master bedroom that wouldn’t feel out of place in a traditional Cycladic island dwelling. It leads to a large terrace at the back. There, a curved concrete bench – ‘one of our Le Corbusier moments’, say the architects – becomes the perfect spot to sit and admire the rear mural, depicting relay runners and inspired by ancient Greek urns. The top level currently serves as the couple’s office, but will eventually be divided into two bedrooms for their growing family. 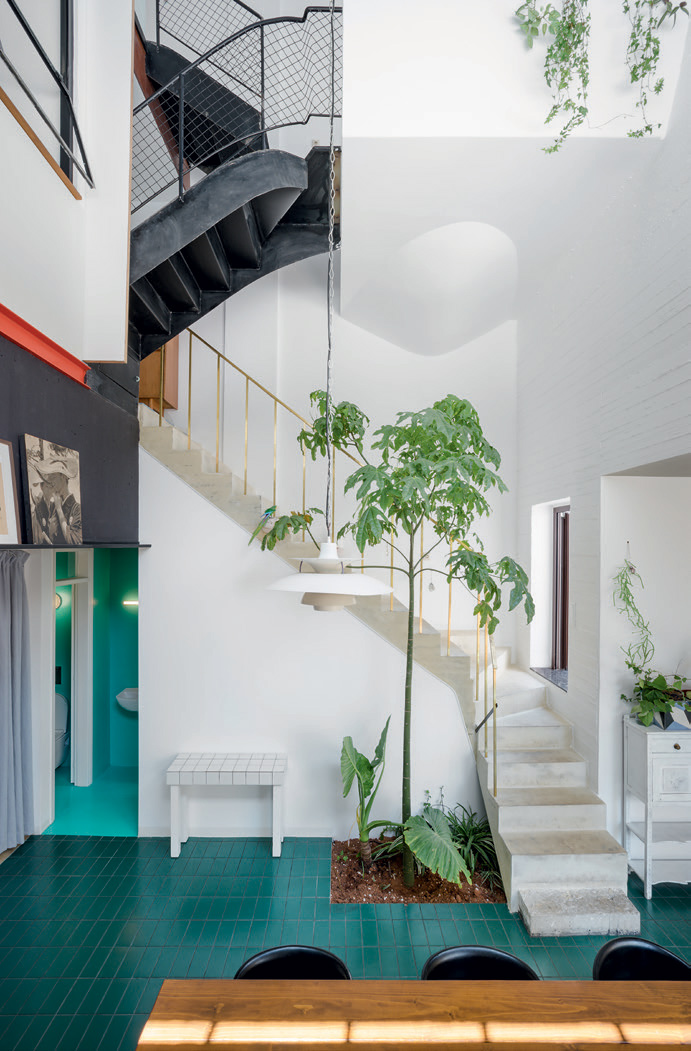 There are sophisticated construction techniques and carefully calculated detailing throughout. Porthole windows cast disco- like light as the sun moves during the day. A red metal gate draws on Frank Lloyd Wright patterns, and is set beside an intricately sculpted, tactile concrete wall. There are plans for a hidden garden. The house is full of reclaimed materials and found objects, embedded in walls and floors. This was not only a financial decision – even though the couple stretched their resources, building during one of Greece’s worst ever financial crises – but also nods to their love of traditional craftsmanship and bespoke touches that can be hard to achieve with off-the-shelf products. Rich colour is ubiquitous, although the architects say this was not a goal in itself, but rather a result of the overall composition.

Instead, textures took priority, enhanced by the combination of different materials. Many materials and fittings were sponsored by manufacturers, such as the Hager and Legrand plugs, the Tsourlakis handmade cement floor tiles, and bathroom pieces by Grohe and Vitruvit. This clever move helped the couple complete their home within budget, but also pushed them architecturally. ‘We had to adjust and adapt according to each donation,’ they say. Eschewing complex technological mechanisms, everything was kept as manual and analogue as possible. ‘We didn’t want our everyday life to have lots of technology and automation, such as lifts and digitisation,’ says Rentzou. ‘We love the ceremony and the play of closing the blinds by hand, for example, instead of having a digital button doing it for you. This decision was not about style or nostalgia. It is about the experience.’

While the couple have already moved in, there’s still work to be done. There will be a floor-to-ceiling bookcase, more wall mosaics, and external staircases to help them reach the roof terrace, with views of the Acropolis – a fitting culmination to this architectural ascendance, from earth to sky.

The triple-height kitchen and living space