The hand-hammered finishes, off-kilter geometry and faintly primordial feel of Fay Andrada’s jewellery contradict her early career as a graphic designer. There’s no linear perfection nor strict adherence to scale in her huge disc earrings, tubular gold studs or domed silver cuffs. Rather, the handwork and deliberate lack of precision that mark out the work of the Brooklyn-based designer point to the more organic talents of a craftsman or skilled metalworker.

Andrada began her ‘totally unplanned’ creative realignment while working in advertising during the recession of the late 2000s. Jobs became scarce and she signed up for a class in metal jewellery design. At first, it was as a distraction. But Andrada also fancied that she could make pieces she had not discovered elsewhere. ‘I hadn’t responded to jewellery in a personal way before I started making it, because I found it so fussy,’ she says. ‘So much of cerebral jewellery lacks functionality – it’s not sexy. I thought it was more chic to wear a single piece of metal.’

In 2009, at the end of her course, Andrada found that she was regularly being asked to design one-offs for friends. ‘I always made special pieces for people, but then I thought: how would I do it for a collection? I knew I couldn’t do this until I could figure out a way that was different from what else is out there.’

The answer lay in single, simple shapes in non-precious ‘everyday’ materials, such as copper and brass. Andrada established a studio and small team in Greenpoint in 2010 and has since been quietly gaining an international following. But although her big, sculptural earrings make a punchy statement to rival the best catwalk jewellery, she is not a fashion-focused designer.

The daughter of an architect, Andrada grew up understanding that design meant responding to certain demands. And as a jeweller, she cares about functional discipline. ‘With architecture, you can only be so bold. There are creative limitations to designing buildings because they also have an interior life. It’s like furniture design, which has to consider the body. I like that rules equal results – I find that the more restrictions I have, the more creative I can be.’ 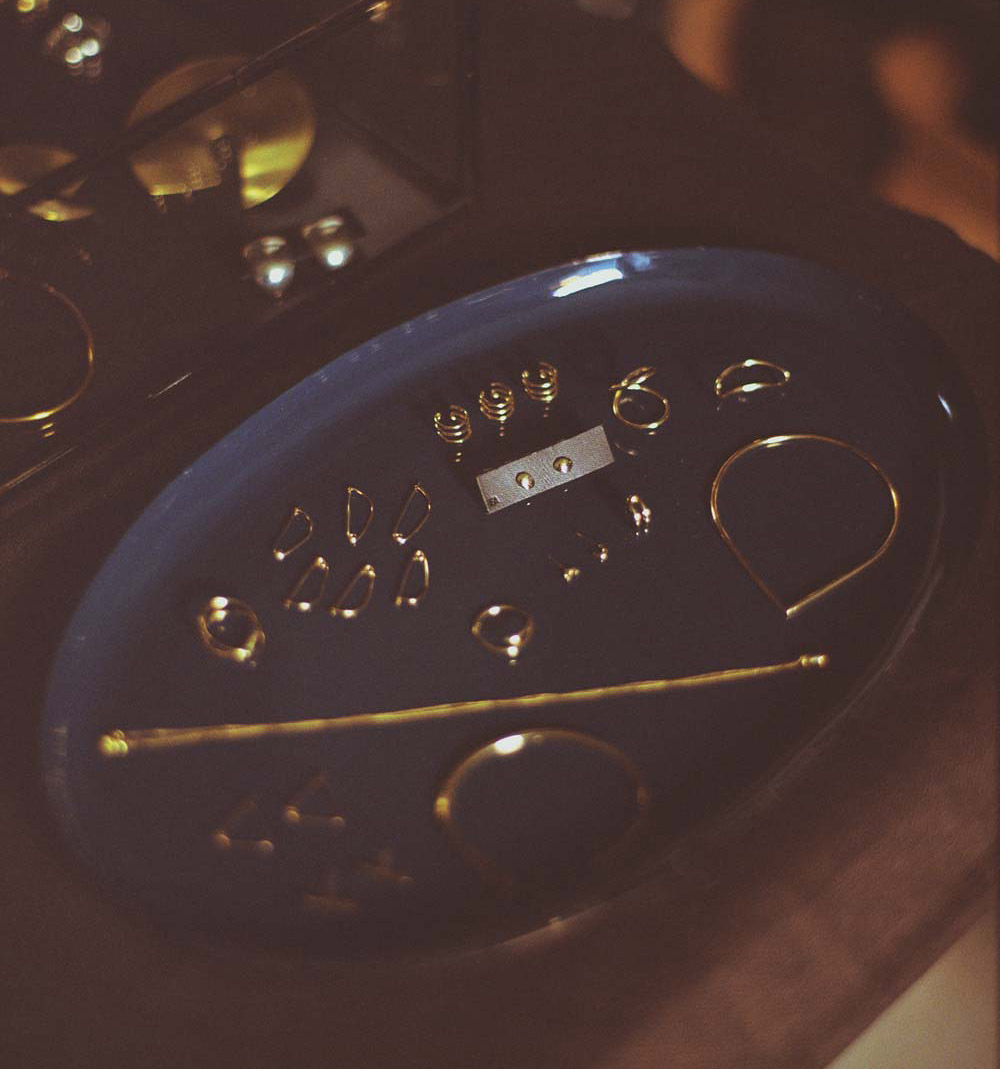 Andrada also has a background in dance, so she has always been alert to the fact that jewellery has to move with the body. ‘I work hard to make pieces with sex appeal and movement,’ she says. Every design she creates ‘has to perform’, so she wears her creations before they become part of a collection. Her team also tries out the pieces, checking they move well and the proportions are in order.

As Andrada’s collections have evolved, so the materials she uses have gone beyond those initial quotidian choices. Now, she says, she has come round to the precious nature of gold, because ‘it is something you might keep for the rest of your life. I like the idea of designing fine jewellery as pieces you would want to wear every day.’

As such, she now offers a fine jewellery line of smaller pieces alongside her large, silver and brass designs. And there has been a noticeable increase in male clients, many of whom buy her single-stud earrings; the ‘Haka’, a tubular, 14ct-gold, J-shaped hook, has proved a particular draw.

Materials, texture and the processes of handcrafting shape Andrada’s vision as she makes her pieces. ‘The tools I use, the torches and chisels, can really change my ideas as I work,’ she says. ‘I have a bangle that I began to hammer first in one direction and then I changed to another. I could see how my movements changed it and, at the same time, I could see how I am finding my identity more as a designer.’

Perhaps it’s the fact that she is something of an accidental jeweller that gives Andrada’s designs the intrigue and character that make them such a draw. ‘The very idea of a career in jewellery design seemed so frivolous at first – it sounds like a girl’s hobby,’ she says. ‘But I’ve had to get over that.’