Arm candy: artists get creative with a Dior classic

London-based artist Marc Quinn turned to his own still life oil paintings, designing a series of Lady Dior editions with a floral print from his personal work on one side, and the same motif with the colours reversed on the other. Courtesy of Dior

Back in June this year, when Dior opened the doors to its monolithic store on London’s Bond Street, the occasion was celebrated with the introduction of a line of limited-edition bags. The eye-catching series was the result of an exclusive collaboration with British art supremo Marc Quinn, who translated his artworks onto Dior’s timeless Lady Dior bag as well as other small leather accessories.

Designed in 1995, the clean architectural form of the Lady Dior proved to be the perfect blank canvas for Quinn’s work prompting Dior to extend the invitation to collaborate to five other esteemed American and British artists.

Unveiled today in the maison’s Miami boutique, new experimental interpretations of the classic bag and accessories come courtesy of Matthew Porter, Mat Collishaw, Jason Martin, Ian Davenport, Daniel Gordon and Quinn once again. Each artist was given carte blanche, allowing them to push the limits of the leather as well as the skill of Dior’s craftspeople. 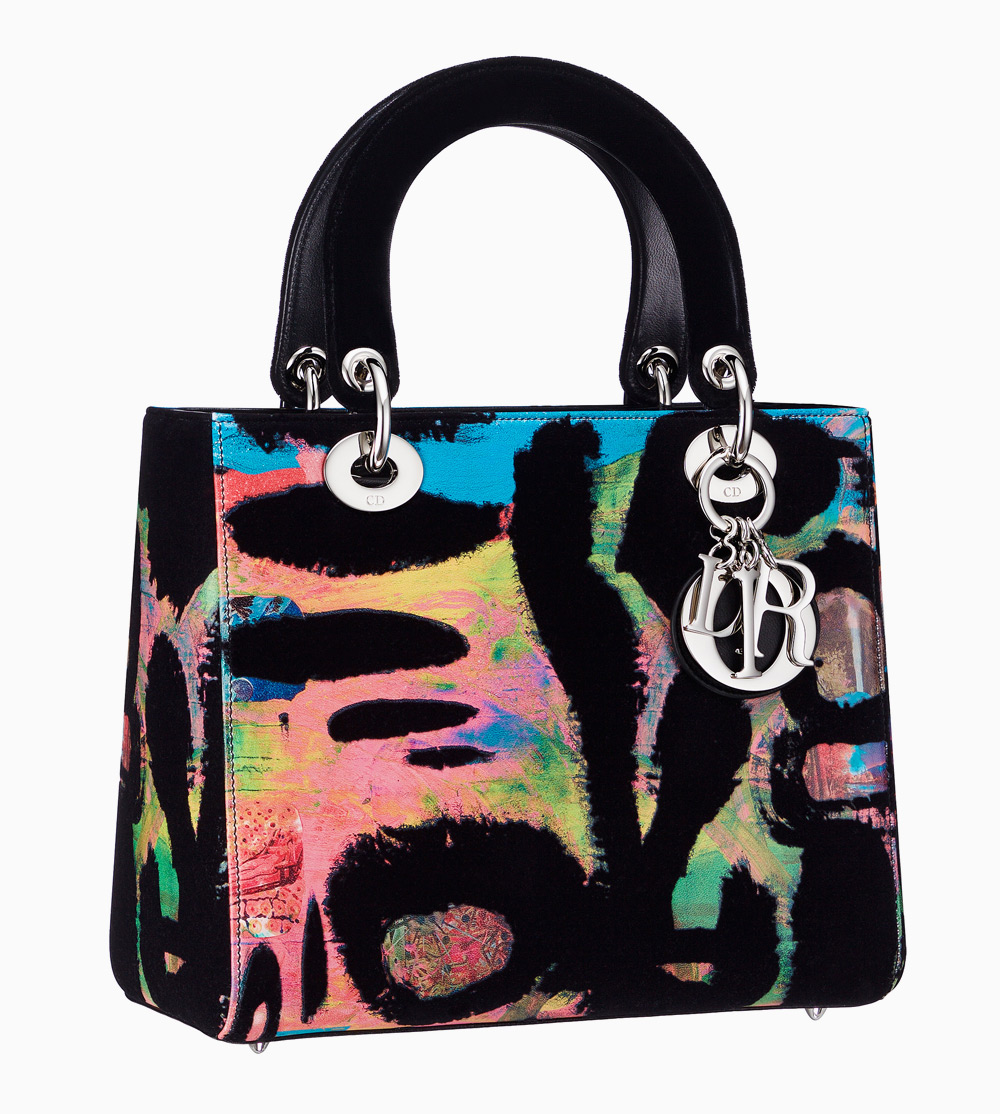 Brooklyn-based artist Chris Martin adapted the drawing of a frog from one his major works for his Lady Dior bag. It comes in printed multicolour lambskin and flocked black velvet, with black velvet-covered handles

Ian Davenport’s unmistakable stripes of glossy paint, which are typically applied to a canvas with a syringe (showcased here on a limited-edition cover for us in 2006), are translated into bands of embossed silvered leather. Running down the bag’s exterior, the leather bands of colour intricately swirl into each other at its base, just like paint on a canvas. Inside, a colourful dotted lining mimics a paint-splattered area of floor in Davenport’s London studio. ‘Using the metallic colours has given me more ideas for the future,’ says Davenport. ‘That’s the great thing about a project like this - it can open up another line of inquiry you wouldn’t normally explore.’

Meanwhile, British artist Mat Collishaw drew inspiration from one his major works to create high-definition prints of butterfly wings on glazed leather – a material that possesses a suitably velvety texture. Applied to the Lady Dior bags, clutches and a silk scarf, the close-up butterfly wings are shot against a black background that contrasts with the bags’ bright blue or yellow linings. ‘I knew that I wanted something that was exquisite and had texture,’ says Collishaw of his designs. ‘The surface of the velvet is not dissimilar to the surface of a moth or butterfly with very fine hairs and a slightly iridescent texture to it. The first bags we made by printing onto leather, then we started thinking about clutch bags; we wanted to do something a little softer, so velvet was the obvious choice.’

After the launch in Miami, the creations will embark upon a global tour, stopping at a Los Angeles pop-up before continuing to stores in Korea, London, China, Dubai and Paris.

Ian Davenport applied his signature Technicolor paint technique to his version of the Lady Dior bag, recreating the effect in metallised calfskin

In this film, Davenport talks us through his Dior Lady Art creation...

Mat Collishaw drew inspiration from one of his major works to create high-definition print on glazed leather for this Lady Dior bag, featuring a bright yellow butterfly

New York photographer Matthew Porter immortalises West Coast streets at dawn and dusk, with a car in flight montaged in. He has recreated a graphic version of this body of work on his Lady Dior bag (pictured right); on the other side, he has mimicked dazzle camouflage, complete with an automobile charm

One version of Jason Martin’s Dior bags was made from a copper-toned sculpted calfskin, with tone on tone jewellery

A pop-up installation will be on view from 29 November at Dior’s Miami Design District store during Art Basel Miami Beach. From 1 December, a freestanding pop-up dedicated entirely to Dior Lady Art will open in Beverly Hills and be open through February 2017. For more information, visit the Dior website