At Gagosian Le Bourget on the outskirts of Paris, a mezzanine viewing level encircles the main gallery space so that visitors can look down into an installation. Even if Jean Nouvel, who was responsible for repurposing the former industrial building in 2012, gave deliberate thought to this architectural feature, he still would not have anticipated the installation of the late Walter De Maria’s Truth / Beauty sculptures, which are being presented posthumously as a solo show.

Although the series of works debuted in London earlier this year, also at Gagosian, their arrangement here arguably offers an enhanced reading of his intention. With four polished stainless steel rods allocated to a granite base, each of the 14 sculptures alternate between a chevron or an X formation. Paired together like some sort of binary code, they seem to appear in identical repetition from a distance; closer inspection, however, reveals how the pairs begin with five-sided rods and successively increase by two, so that there are 17 sides to the rods in the final grouping. 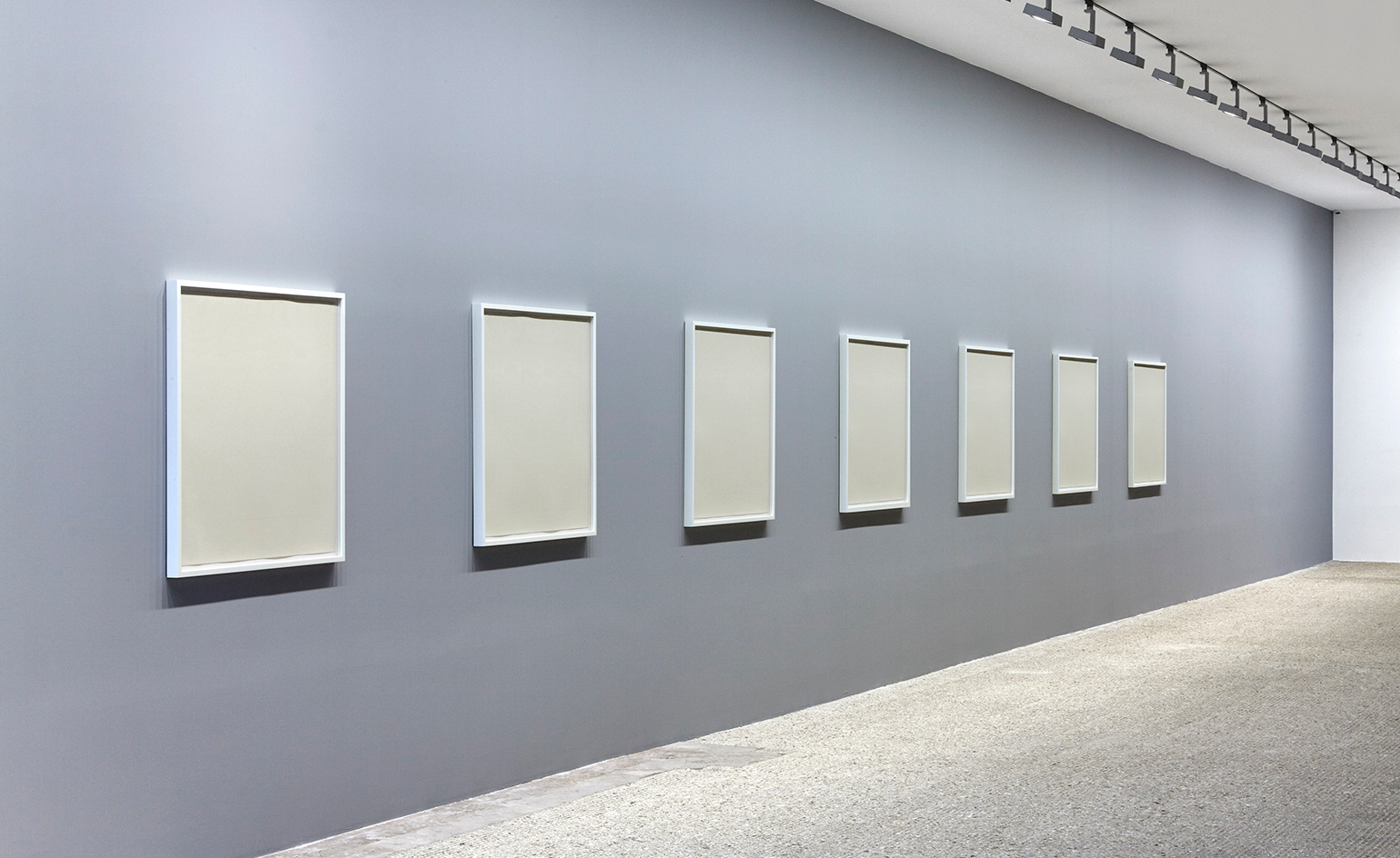 The earliest work in the exhibition is a series of drawings, ’The Pure Polygon Series (1975–76)’, comprising seven hand-drawn pencil drawings that begin with a triangle and follow with six additional shapes in succession. © The Estate of Walter De Maria. Courtesy of Gagosian. Photography: Thomas Lannes

People familiar with De Maria’s work will know that he often returned to permutations of polished rods; in fact, Large Rod Series: Circle/Rectangle 11, is other principal work comprising this show, and the installation of 11-sided rods atop an early-nineteenth century Indian Agra carpet (loaned by Galleria Moshe Tabibnia in Milan) projects a striking contrast between the mighty gleaming surfaces and the intricately woven traditional motifs. But where in London, the exhibition was presented as a linear series, the Le Bourget configuration is a counter-clockwise spiral.

When De Maria died in 2013 at the age of 77, he had yet to inscribe the words ’truth’ and ’beauty’ on opposite sides of each base. According to Gagosian specialist Kara Vander Weg, who worked with him for ten years until the end, he had yet to find the right engraver (Elizabeth Childress, his studio director who now oversees the Walter De Maria Archives, worked with Gagosian to locate an expert in Rhode Island). 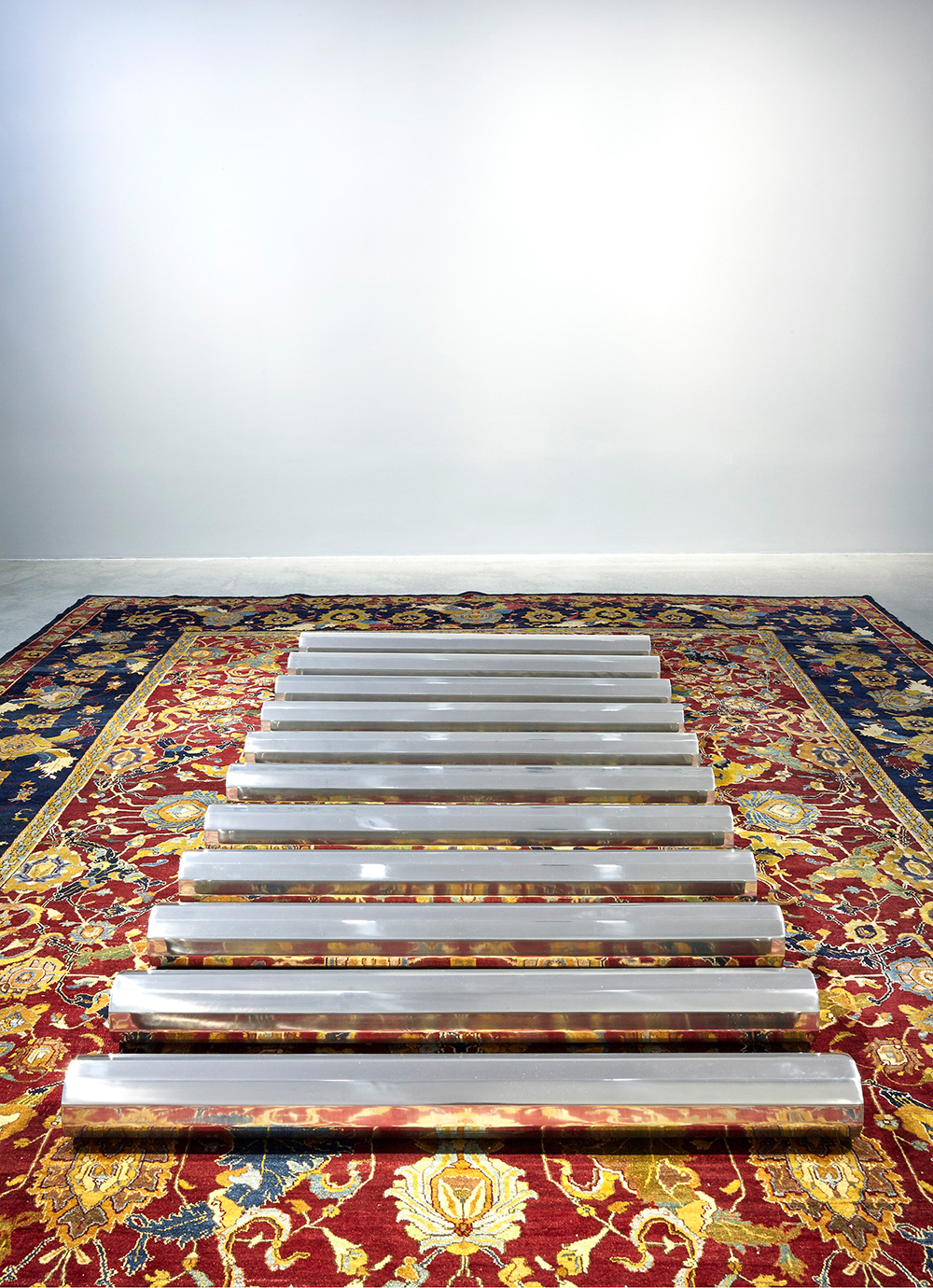 This is not the first time that De Maria imbued a work with language; but with these two words, he is inviting viewers to confront a powerful duality that has inspired and challenged philosophers and artists since the dawn of Plato. On this writer’s visit, guests were further encouraged to walk on the chalky white pile carpet that anchors the installation. As noted by Paris art academic Donatien Grau, who was present during the tour, the experience of circulating among the sculptures subsequently raises the possibility of ‘entering truth and beauty.’

But perhaps it’s worth considering how the works might have been interpreted had they been left as they were at his death. Would viewers have arrived at these two words on their own without seeing them spelled out over and over again? Do the sculptures register more like a memorial in this context? Vander Weg believes he would have been satisfied with the result. ‘I think it is important to have the words engraved on the sculptures. But I mean, we’ll never know. It’s an interesting thought.’ Indeed, one can’t help but think of Keats’ Ode on a Grecian Urn: ‘"Beauty is truth, truth beauty,"— that is all Ye know on earth, and all ye need to know.’