Left, Alcaide’s black panel paintings, which will appear in a new show in Basel next year. Right, Ricardo Alcaide with Nacho outside his studio in Edificio Vila Normanda, in São Paulo, featuring a panel mural by artist Antonio Maluf. Photography: Alex Batista

Ricardo Alcaide’s fascination with urban architecture runs deep. His work considers buildings as physical manifestations of complexity, contrast and tension, looking beyond the structure and aesthetics of the built environment, and taking on its relationship to local social and economic realities. The Venezuelan artist has spent years immersing himself in the environments of capital cities Caracas, London and Madrid, and more recently São Paulo, where he now lives.

As he prepares to stage a major as-yet-untitled exhibition at the von Bartha gallery in Basel, Alcaide is in an introspective mood, musing on the show’s theme of interrupted space: ‘I have been working around issues of urban spatial conflicts. Also instability; spatial interaction, inclusion and exclusion, boundaries not only physical but also sociological and psychological.’

He explains that barriers and blockages will be a key focus of the show, examined through an abstract lens. Working across a range of mediums, from paintings and collages to sculptures and large-scale installations, most of the artworks on display will be created especially for the exhibition, the inaugural show in von Bartha’s freshly renovated space. ‘All the pieces will complement each other, and some have been created specifically for the gallery. I intend to create pieces that are in conversation with the space itself,’ Alcaide explains. He is particularly excited about a new work of a kind he has never worked on before, combining cast concrete with colourful small-format monochromes – also untitled. 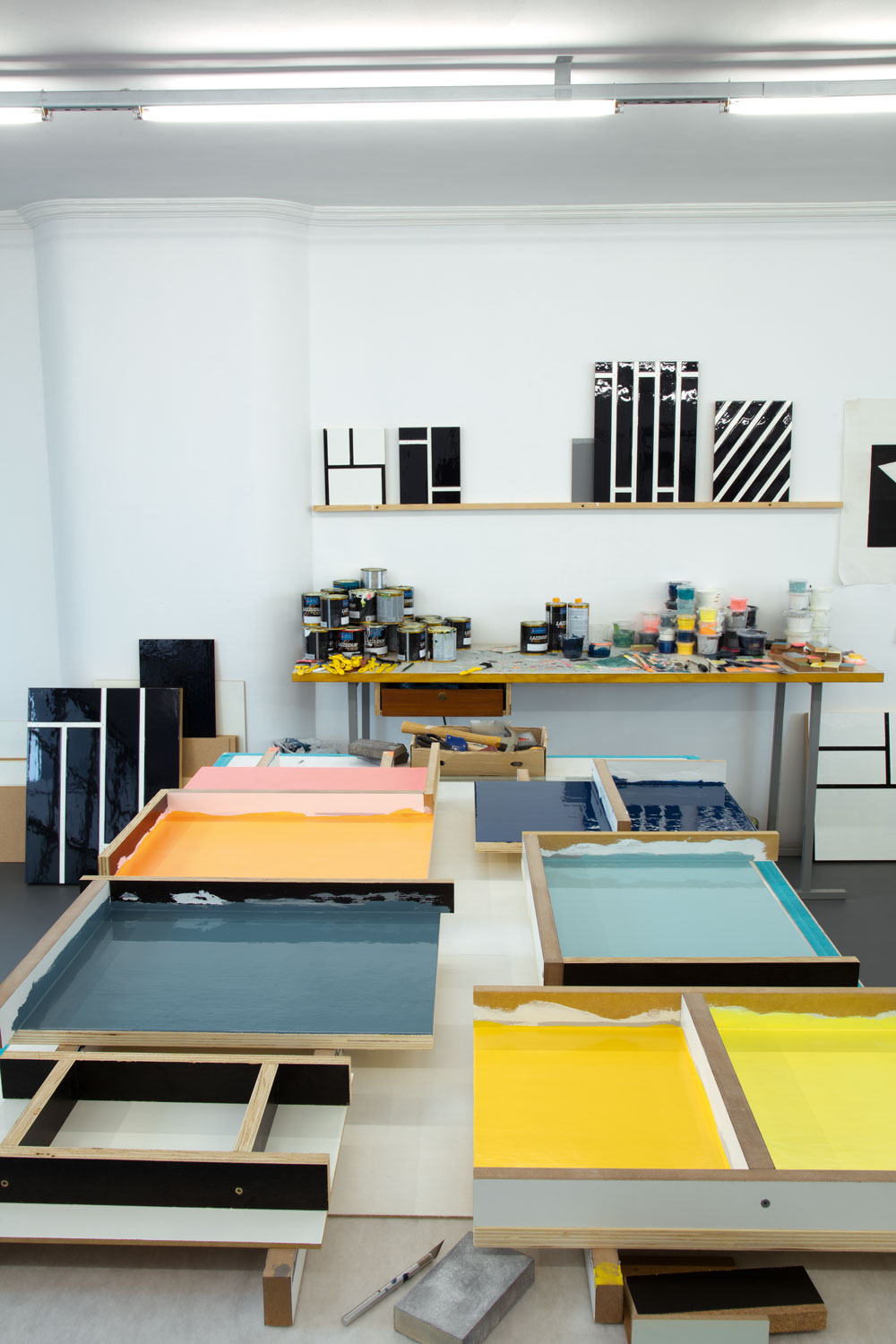 On entering the gallery, the first architectural barrier visitors will encounter is a floor installation formed of approximately 700 painted bricks, obstructing both the space and the exhibition itself – it will have to be physically crossed to gain access to the show. Alcaide’s stark industrial panel pieces will also feature heavily, endowing discarded construction materials with a new functionality. Applying industrial polyurethane paint to MDF boards, shiny rock-hard surfaces are produced that reveal every mark of his process. These are among the most challenging artworks made for the exhibition, he explains, as ‘the process involves a great deal of manipulation I have to do on my own. Also, working with a polyurethane paint with a catalyser creates loads of tense moments: one mistake can spoil hours or even days of work.’

Another installation sees Alcaide repurpose commonplace metal shelving, introducing an artistic dimension to an otherwise ‘empty’ structure with created elements placed alongside found objects, many of which he sources from around São Paulo. ‘I find things out of the blue and have a very immediate response,’ he says. ‘I see beauty in meaningless-looking objects. In São Paulo there are construction sites everywhere, with caçambas [skips] full of rubbish.

I always look inside to see what they have for me.’ Those familiar with Alcaide’s art will be aware of his long-running fixation with modernist architecture, particularly that of Latin America. A fundamental aspect of his personal and cultural heritage (he cites Gio Ponti’s 1956 Villa Planchart in Caracas as a key inspiration), the complex relationship Alcaide has with the movement has heavily influenced much of the work he has produced in recent years. His studio, located in the heart of São Paulo among residences, offices and more deprived areas, puts Alcaide on the front line of the vast city’s complicated social system. Describing an anarchic no-man’s land of restricted zones, lawless communities and homeless citizens, who, deprived of help from the government, occupy the city’s empty buildings, he says, ‘The centre of São Paulo is a portrait of many different things at the same time –what I produce comes straight from these frictions’. 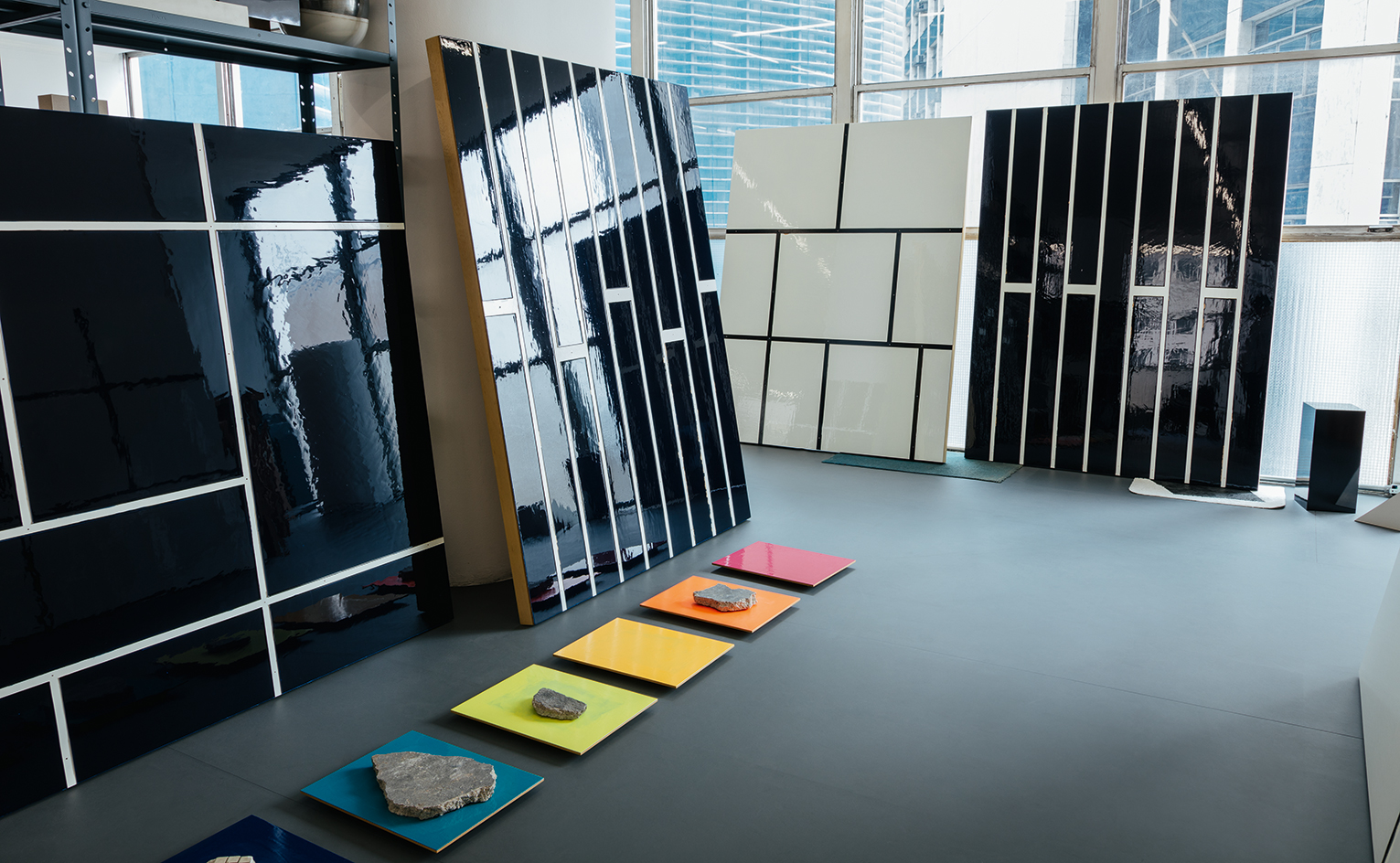 Pointing to the shelving compositions and panel paintings, he says, ‘Both works have strong modernist architecture references but represent urban conflict language. The exhibition is not only about barriers; it’s also about the tiredness of so-called progress.’ He pauses. ‘A lot of people say my work is about the failure of modernism, but that’s not what I want to say. My mixed feelings give a more realistic dimension to the discussion. The work sits in-between the idealism and the reality of modernism, creating tension.’

Does Alcaide define himself as a political artist? ‘I wouldn’t describe myself as political, but my work does contain indirect political elements, because it is part of the subjects that concern me most. I am very critical of my immediate surroundings and constantly challenged by them.’ Another pause. ‘This can be inspiring or disconcerting… but it makes me think.’

The von Bartha exhibition will be followed by participation in selected international art fairs and a small solo project at ArtGenève. But it’s spending time in his São Paulo studio that Alcaide is really looking forward to, accompanied by his dog Nacho. He is cheerfully laissez-faire about the future. ‘I never know what will come next. All I need to do is pay attention to everything around me until I see a sign to follow.’