The cavernous halls of the Gagosian Gallery in Rome play host to an exhibition of outsized tile paintings by Adriana Varejão, one of Brazil’s most renowned living artists

The azulejo – a kind of painted, tin-glazed ceramic tile – has a rich and diverse history. Since its invention on the Iberian Peninsula seven centuries ago, it has drawn influences from Moorish artisans, the Italian Renaissance, and imported wares from the Netherlands and China. The Portuguese, who consider it a national symbol, introduced it to the distant corners of their empire. It continues to be seen everywhere from magnificent public buildings to humble private abodes.

The dimensions of azulejos have varied with time, but none have been quite as ambitious as the ones by Adriana Varejão, currently on view at the Gagosian Gallery’s Rome outpost. These blue and white tiles (or more accurately, tile paintings) measure 1.8 sq m each. With sweeping brush strokes and vivid cracks, they leave a strong impression even in the cavernous gallery.

Born in Rio de Janeiro – a one time capital of the Portuguese empire – Varejão has incorporated tile motifs in her work since 1988. For her, tiles are a means to explore kaleidoscopic identities. Her work is expressive, audacious and much loved. Bernardo Paz, perhaps the greatest art collector in the Southern Hemisphere, created a dedicated pavilion at Brazilian art museum Inhotim (see W*211) to house one of her installations. More recently, she was invited to drape over the aquatic centre for the Rio Summer Olympics with a tile-themed temporary mural.

Varejão produces her tiles by applying generous layers of plaster and oil paint onto canvas. As the paint dries, cracks appear on the surface by accident of nature. These are left unrepaired, perhaps as metaphors for the haphazard nature of cultural collisions. There’s a slightly savage, disquieting side to their beauty. 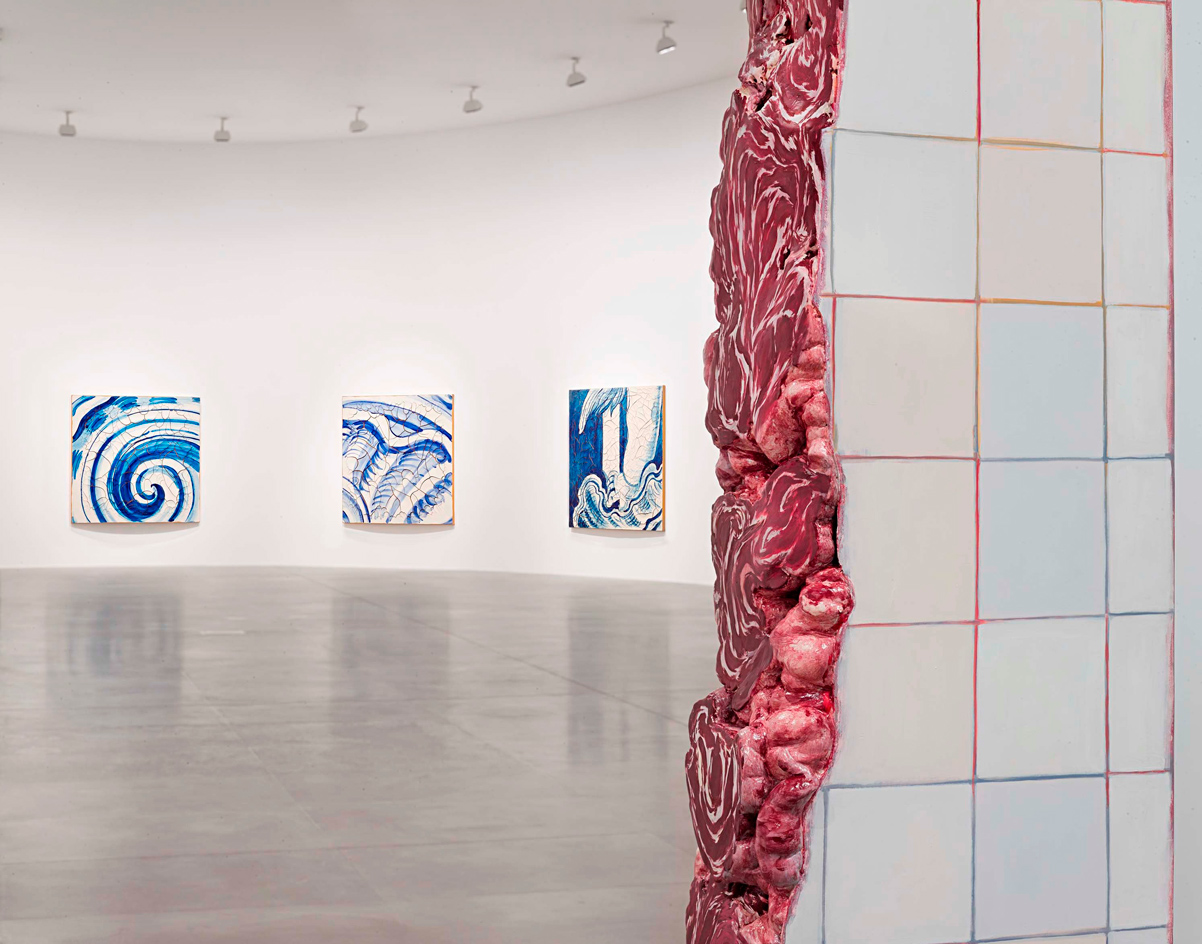 The tile paintings now on view in Rome are the largest ones Varejão has produced to date. As she recalls, they were inspired by a dialogue between two columns at the Church of San Ignazio. Though these look exactly the same, one is made of marble and the other of wood, painted to resemble marble. Struck by the ‘play on artificiality and representation’, Varejão opted to work with baroque motifs, now found on each painting in the main hall.

‘I based each of these paintings on Portuguese baroque tiles, their images and their object quality,’ she explains. ‘I chose the motifs from my huge archive of tile images, focusing in general on those with more abstract and geometrical qualities.’ Indeed, with a close look and a good dash of imagination, one can see how each painting is a dramatically enlarged close-up of a cherub’s head, an architectural fragment, a rose or a shell.

The show also includes a single installation, Rome Meat Ruin, a tiled wall revealing a cross-section of swirling bloodied meat, which has been rendered in trompe-l’œil (a quintessentially baroque technique). ‘In my work, tiles are not tiles, meat is not meat. It is all about simulation and parody,’ remarks the artist.

Coinciding with the Gagosian show, Varejão has also been invited to present a multi-channel video installation, Transbarroco, at the French Academy in Rome. The piece was shot in the baroque churches of Brazil, backed by sound recordings of Afro-Brazilian drums and readings of key texts on Brazilian identity. It’s a powerful meditation on empire, appropriately on display at the heart of the greatest empire history has ever known.

Varejão’s tiles are produced by applying generous layers of paint onto canvas. As the paint dries, cracks appear on the surface by accident of nature, and become part of the painting

The artist based each of the paintings in the show on a Portuguese baroque tile, enlarging figurative details to the point that they are removed from their original meaning

’Azulejão’ is on view until until 14 January 2017. For more information, visit the Gagosian Gallery website