There was much art-world hype earlier in the year about Robert Rauschenberg’s famously fragile Monogram goat travelling to London for the first time in two decades. It was posited as a lynchpin in Tate Modern’s anticipated Rauschenberg retrospective – another UK first since the great American artist passed away in 2008.

Kneeling down next to the beast, looking into Monogram’s glassy eyes, he was worth the 20-year wait. There’s humorous absurdity in his vacant expression, his chin hairs matted in a rainbow seal of oil paint. But there’s also something mournful. He’s suspended in a ridiculous tyre belt, to be ogled by visitors. Monogram began life as a $15 stuffed animal at a used furniture store. Since then, he’s had quite the life. Like many of the artist’s renowned Combines, Monogram developed various appendages over a number of years. At one stage, he was mounted on a vertical canvas before being slotted inside the rubber tyre for which he’s now known. As Rauschenberg said, the tyre and the goat ’lived happily ever after’. 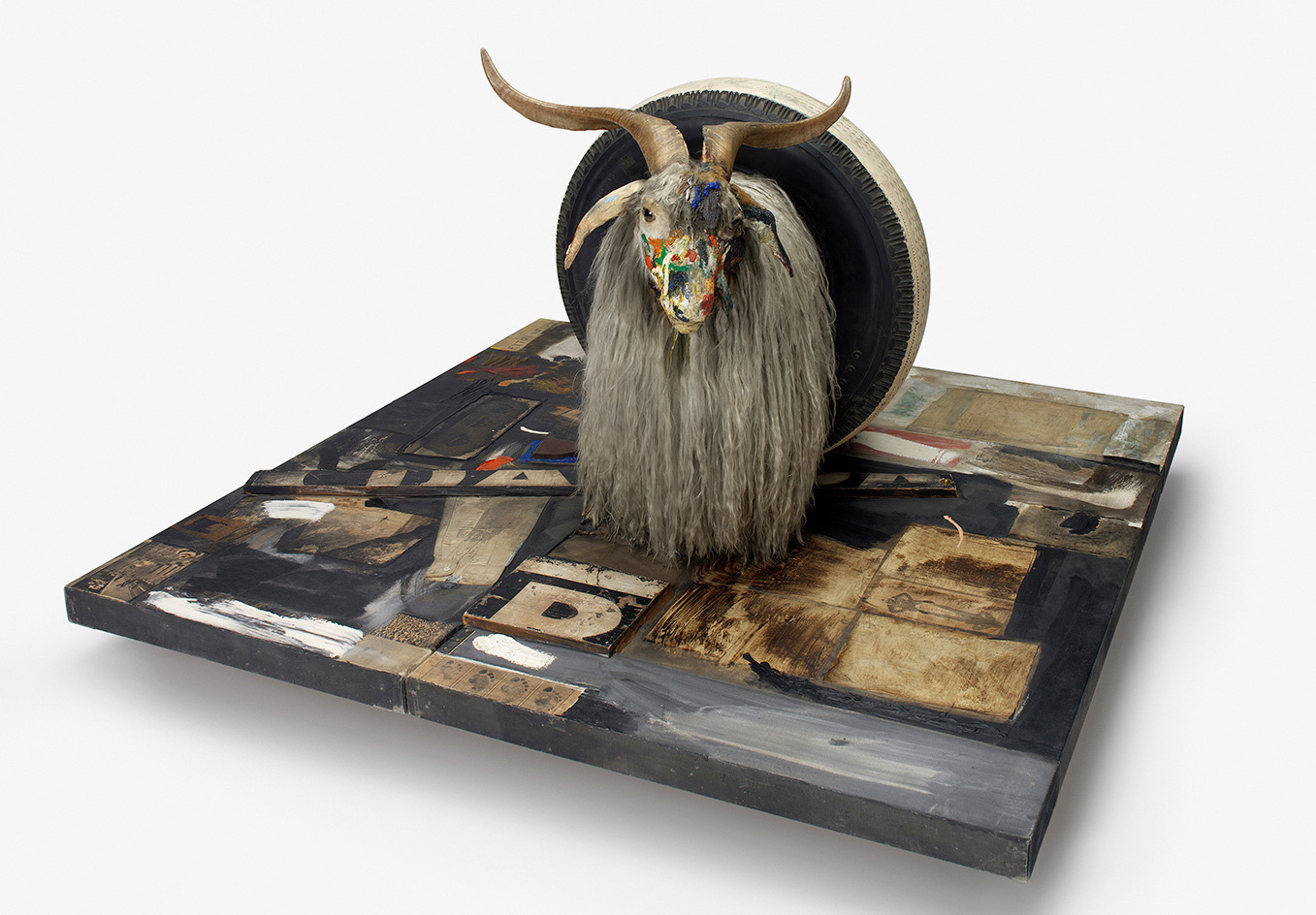 A little like his Combines, Rauschenberg was continually adding appendages and arms to his practice, driven by an insatiable curiosity with materials. Each chapter of his six-decade career (including his silkscreen period, live performances, technology and material abstraction) has a dedicated room in the exhibition. This change of mediums and methods mirrors the artist’s moving physical locations. He toured, holidayed and journeyed extensively – most famously to Cuba, Spain, Italy and Morocco with Cy Twombly in the 1950s. As Tate’s director of exhibitions Achim Borchardt-Hume says, ’he saw the experience of art as inseparable from the experience of life’. 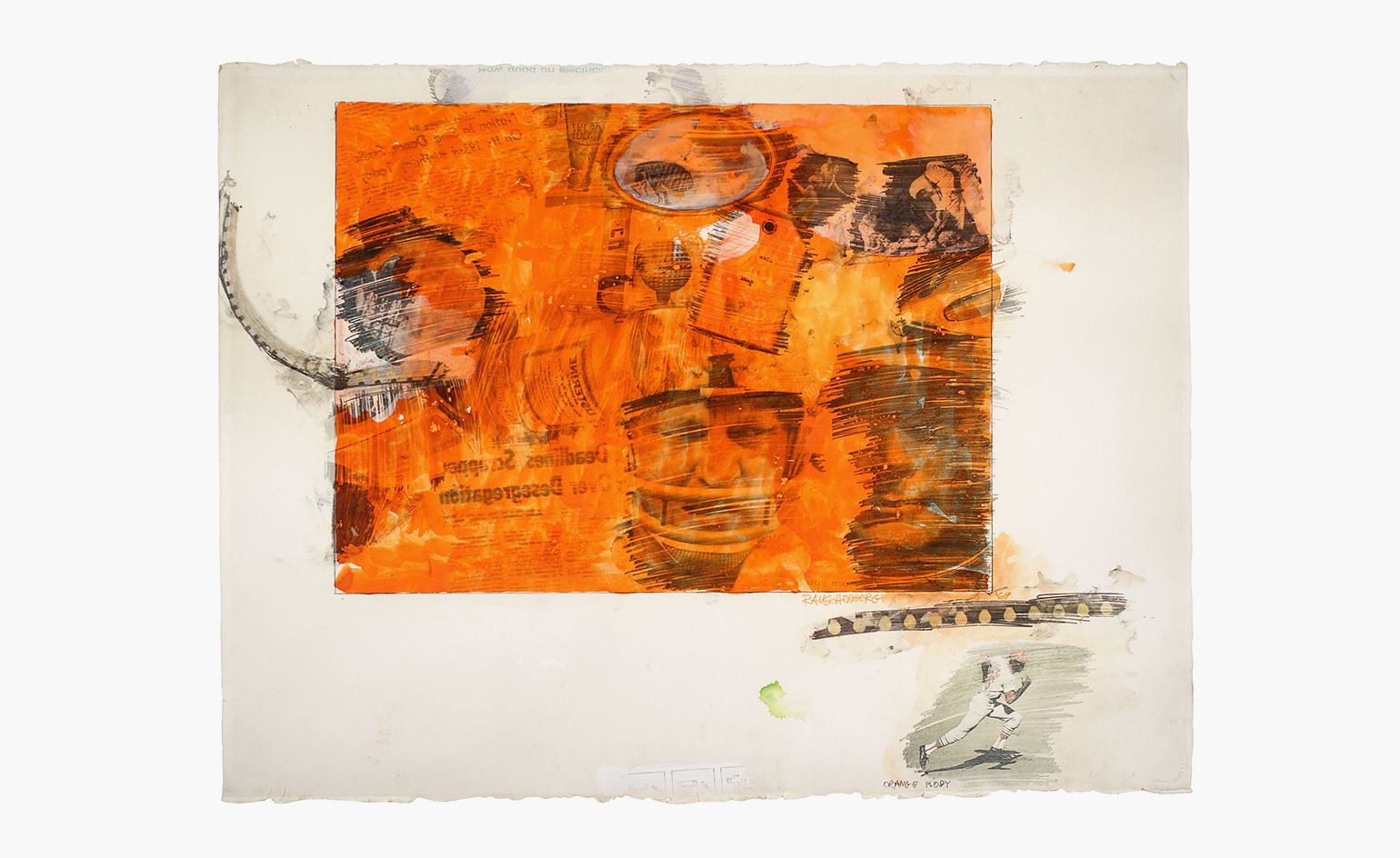 The exhibition starts with Rauschenberg’s early experiments at Black Mountain College, in a room overwhelmed by monochrome. It’s as if colour couldn’t be introduced yet, because Rauschenberg was too preoccupied by texture. These early works have a simplicity, an air of cool and a material playfulness that lay the foundations for his future work. A renowned early collaboration with John Cage, Automobile Tyre Print (1953) hints at what’s to come from Rauschenberg’s performative work. Here, Rauschenberg laid page upon page of typewriter paper on a driveway, and asked Cage to run over them in his car, with ink on the wheel. As Rauschenberg said at the time, Cage was ’both the printer and the press’. 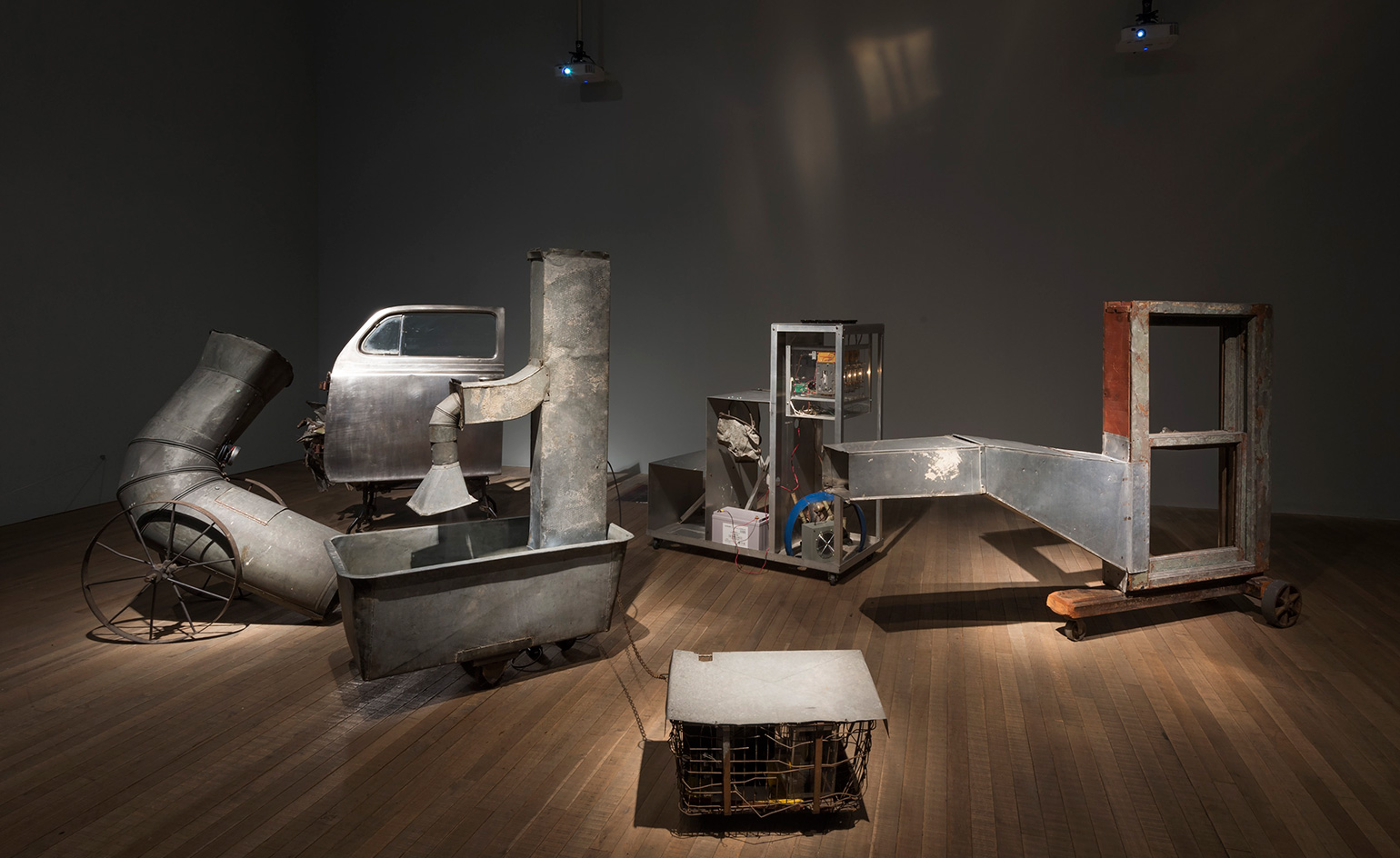 The idea of repurposing and using objects that are already lying around (as seen in this early use of a car and typewriter paper) went on to define Rauschenberg’s practice, and help redefine the landscape of American art. Rauschenberg used the objects of life: boots, paint pot lids, desk fans and, perhaps most importantly, newspaper clippings. He embedded a radio into one of his Combines, with the dials still showing, so that visitors could choose the station. In this sense, the audience – the users of these essential life objects – was as much a part of his work as the materials were.

Rauschenberg’s choreographic pieces (here represented by a host of archival material, photographs, projections and film) grew in direct relation to his sculptures and paintings. Though static, his silkscreens have the same energy and life that his dances do; framed against a wall, his later fabric swathes ripple like flags when a visitor walks by too closely.

Despite the vast spectrum of the artist’s work, each phase bares his distinct signature. What this exhibition does so cleverly is to simply allow this genius to unfold. Chronologically, without fuss, or unnecessary embellishment, the Tate has allowed Rauschenberg’s work to speak for itself. Any art world hype is wholeheartedly justified.

Rauschenberg’s silkscreens used images found in newspapers and magazines of the 1960s. Courtesy of Tate Photography

’Robert Rauschenberg’ is on view until 2 April 2017. For more information, visit the Tate Modern website