Not many artists can fill 28,000 square feet of gallery space with just six works.

This week the late great Jason Rhoades has done that, with his largest ever exhibition in his hometown of Los Angeles, recently opened at Hauser Wirth & Schimmel. A survey of this kind on Rhoades – who died in 2006, aged 41 – has been in order in LA for some time.

Rhoades was a graduate of UCLA, where his professors included Paul McCarthy and Chris Burden, and he continued to live and work in the city his whole life; but it’s only now that curator Paul Schimmel has traced the trajectory of Rhoades’ career in its Californian context. The six installations span two decades, and have been carefully selected to summarise the artist’s interests and the subjects that preoccupied his practice: sex, politics, religion, art, race and gender. 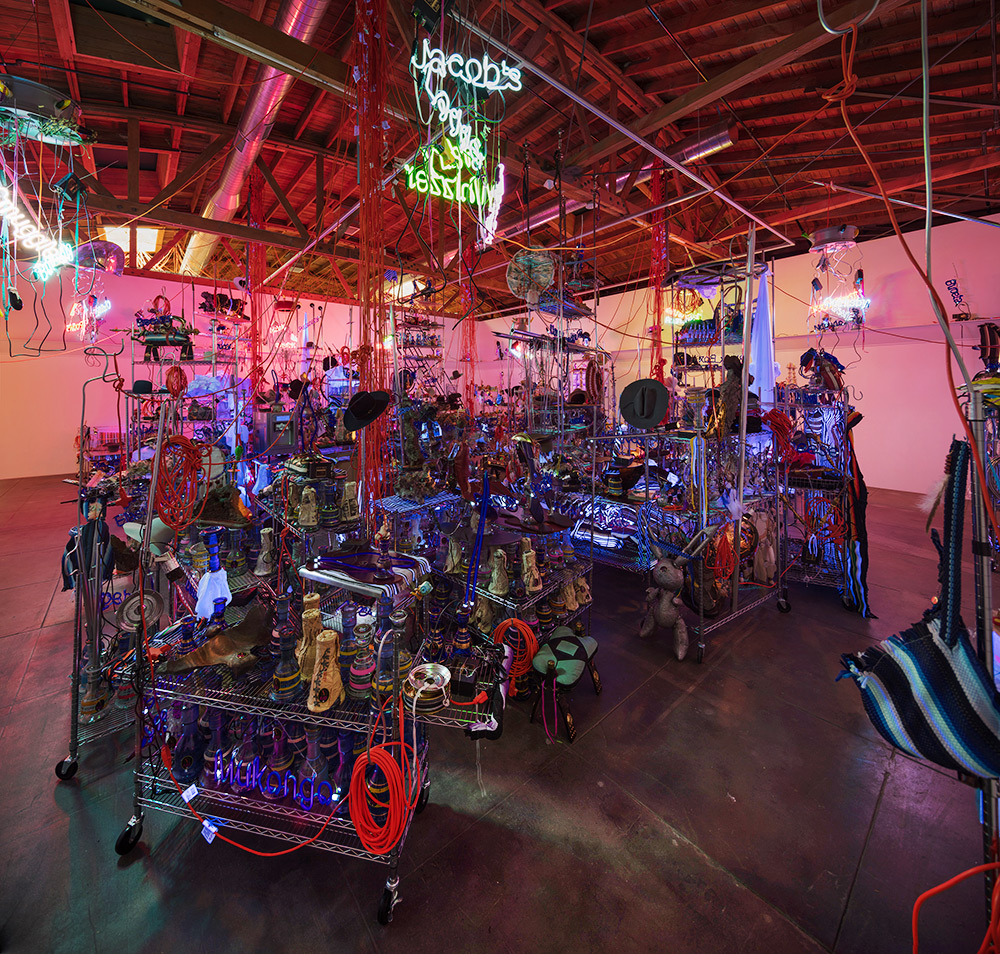 The later works, right up to his last – Tijuananatanjierchandelier (2006) – tug you towards another issue: the search for the ‘ultimate pussy word’. Of course, behind the puerile pursuit in neon lights, Rhoades points to the way language and culture, in a transnational era, condition our thoughts about gender and sexuality.

There is also comfort in Rhoades’ capitalist chaos: the irresistible warmth and light that emanates from his materials and embraces you. In their unabashed, at times brash, maximalism, unapologetic in their physical scale, Rhoades didn’t see any of his works as complete — but in this exhibition, they take you on a journey.

Tijuanatanjierchandelier, 2006, is the most recent work on show, and raises questions about consumerism in relation to disparate cultures and classes by exploring tourism in analogous third world border towns: Tijuana, Mexico and Tangier, Morocco

My Madinah. In pursuit of my ermitage..., 2004, was designed as a bipolar transmission and reception station

In The Creation Myth, 1998, Rhoades sought to understand why, how, and what humans create by exploring creationist and evolutionist theories in tandem

Swedish Erotica and Fiero Parts, 1994, is Rhoades’ only work to specifically reference the urban and cultural landscape of his native LA. His deep fascination with Ikea and the act of buying inspired him to create modular set-ups of ’furniture’ for viewers to explore

My Brother / Brancuzi was originally created for the 1995 Whitney Biennial, Rhoades’ first national museum exhibition. Its setting and history inspired the artist to explore the values of modernism

‘Jason Rhoades: Installations, 1994–2006’ is on view until 21 May. For more information visit the Hauser & Wirth website