‘In the gardens and homes I have designed I have always tried to allow for the interior placid murmur of silence,’ said Luis Barragán in his 1980 Pritzker Prize acceptance speech. In a new body of work by the American artist James Casebere, that silence sings.

‘Emotional Architecture’, on view through 11 March at New York gallery Sean Kelly, explores the concepts that Barragán cherished — serenity, silence, intimacy, amazement — as essential for private life yet lacking in an International Style of shadowless glass boxes. Casebere’s large-scale photographs immerse the viewer in the Mexican architect’s stark facades, vibrant colours, natural materials, and extraordinary apertures while opening up enchanting new corridors between the vernacular and the spiritual. 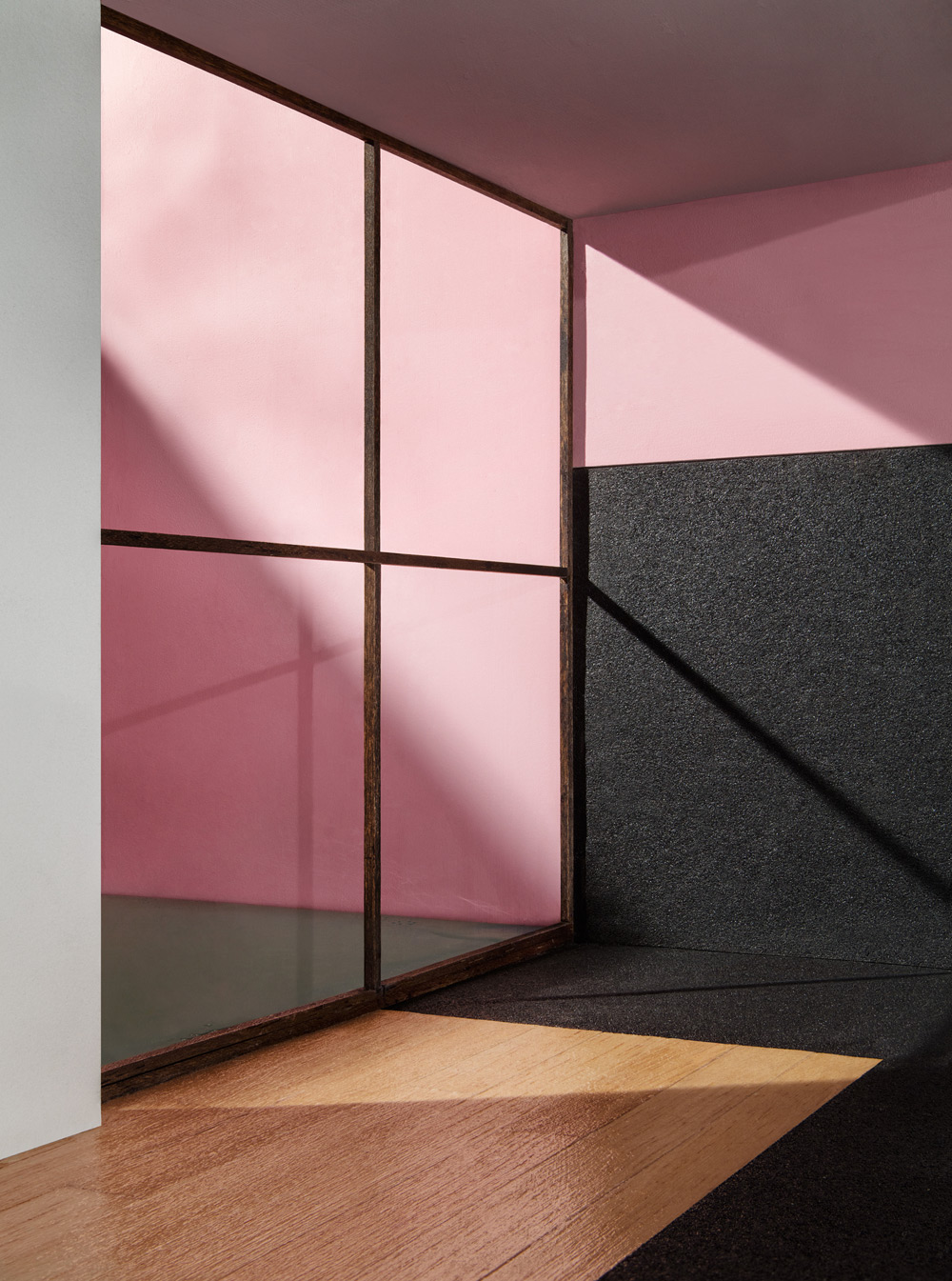 ‘I intuitively gravitated to Barragán, having known and appreciated his work for a long time, and started with an image of his house and studio,’ says Casebere, who created a table-sized foamcore model of the concrete building and then photographed it — a method he has previously used to interrogate spaces ranging from prison cells to Thomas Jefferson’s Monticello. ‘I was interested in creating a space that was contemplative and solitary and beautiful, without the associations of confinement.’

The stunning images, which also depict models of Barragán’s Casa Prieto-López, Casa Gálvez, and Casa Gilardi (a career-spanning greatest hits sampler), delight the eye while gently vexing the rest of the brain. Amid the clear, bright planes of colour and Photoshop-straightened lines, touches of the handmade proudly remain for those who look close enough: would-be wooden floorboards gradually reveal their forced perspective, a grassy patch snaps into focus as the scrubby faux turf traversed by model trains, a speckled black floor shows itself as a square of carpet padding. 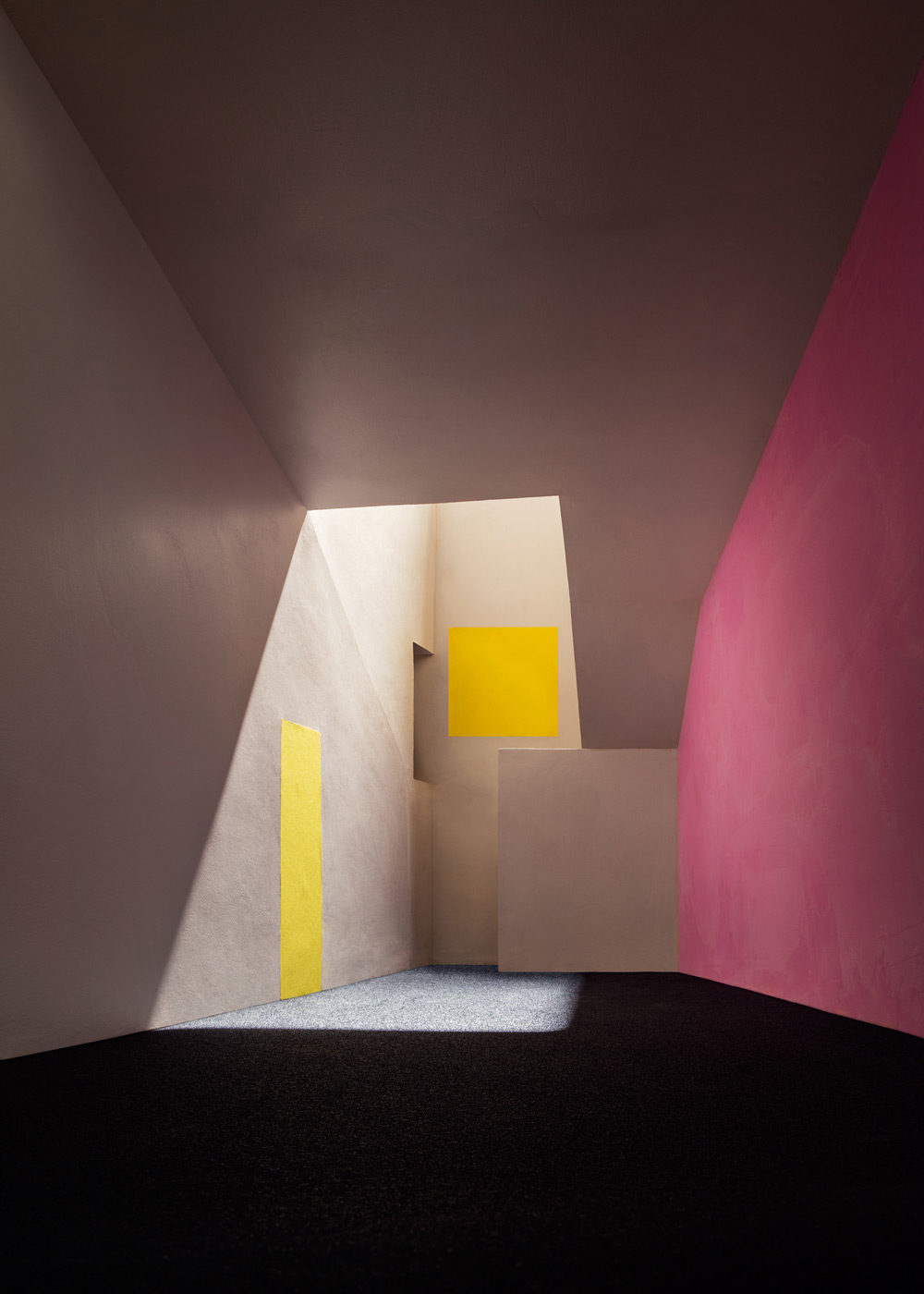 ‘I change the architecture in many cases to suit the photograph, and also philosophically I eliminate things or I emphasise things,’ explains Casebere, who decided to strip away all of Barragán’s staircases. ‘I just have this association with them, that it’s transcendental or somehow religious in association, so I took every staircase out of every space, and yet I left the crosses, because formally they’re so important.’ One such cross takes the form of wooden girders supporting the floor-to-ceiling window in Living Room (2017); it is one of a family of linear elements that rhyme with the photographs’ dark wood frames.

A counterpoint to the colourful, sun-dappled joy of the exhibition’s main room of ten photographs is the chilly and chilling Grandstand (2016), which gets a darkened front space all to itself. Framed by an ominous thicket of flags and grey clouds, a granite podium stands empty, with a trio of microphones assembled in anticipation of a barking ideologue. ‘It’s based on Albert Speer’s podium or grandstand at Nuremberg,’ says Casebere. ‘That’s in the show just because of this moment, politically. I felt that I had to bring it in.’ And so Barragán’s serene silence is juxtaposed with the garish cacophony of President Trump. §