Deep in dunes: Belgian firm OOA creates a seaside shelter with a secret

Office O Architects’ Villa CD – located in Belgian dunes near Oostduinkerke – features a plateau structure that extends out beyond the property, creating two open terraces at the front and the back

A brutalist villa with a secret sunken storey has risen from the Belgian dunes near Oostduinkerke, a small seaside town known for its untarnished beaches and shrimpers on horseback. The family home is located within a community of bungalows built in the early 1960s, bordering a protected nature reserve on one side.

Strict building regulations specified the height and distances from the road and to the neighbours, while also requiring the structure to fit in with the residential style. Developing these guidelines into their design, Office O Architects (OOA) also had to meet their brief.

The clients, an older couple, had contradictory demands requesting privacy, yet openness and intimacy for their own living quarters, as well as space for their extended family. Magalie Munters, lead designer at OOA, describes the project as an ‘organisational puzzle’. 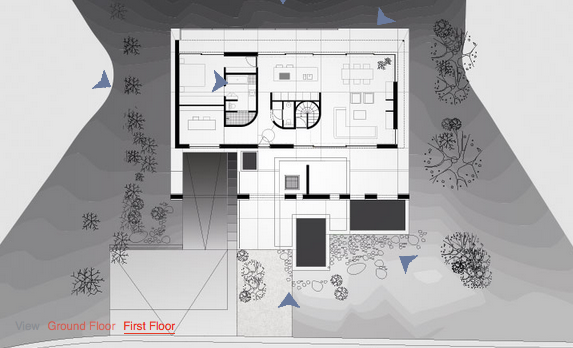 They came up with an architectural solution on which the whole property pivots: a concrete ‘table’ and a perpendicular wall at the front of the plot. ‘The combination of the horizontal plateau and the conical wall answers the different questions – structural, constructive, psychological,’ says Munters.

The plateau holds the self-serving home for the couple, yet as it extends out the land curves down to open up space for a lower storey, housing two studios for their children and grandchildren. From the back of the villa, the building is a two-storey home, yet from the front it is a bungalow. Similarly, the conical wall has dual functions – operating as a shield for privacy, while its irregular openings bring in light, frame views and seen from the street act as a beguiling design feature.

‘The material choices were mainly guided by a distinct dialogue between the extrovert structure and the bungalow-typology,’ says Munters, who selected the piled white bricks, aluminium and tubular steel railings to reference the mid-century style of the surrounding area and give the home a ‘timeless feel’.

The studios each have private bathrooms and outdoor patios

Irregular cut outs in the conical wall frame the home from the outside, while providing privacy for those within

A hanging white chain serves as a rainwater drain, while also creating a zen atmosphere for the studio guests

Continuous materials create an atmosphere of zen inside the rooms

The plateau protects the dune reserve below, which building regulations required