Architect Anda Andrei at The Asbury, which opened earlier this year

For years, Asbury Park, down the New Jersey shore, has mostly been known as one  thing: a pre-eminent music destination for legendary bands. Be it the Ramones, The Clash, Bon Jovi or, most notably, Bruce Springsteen (whose debut album is titled Greetings from Asbury Park, NJ), many bastions of rock culture have played here since the 1960s. With its soulful seaside boardwalk, vibrant nightlife, Jazz Age heritage and  1920s architecture peppering its periphery, the city was a picture-perfect piece of good ol’ Americana – that is, until the late 1970s.

By 1984, Asbury Park had been in a long decline. Grab-happy developers bought huge chunks of land designated for redevelopment but were then stalled by economic recession, leaving areas untouched for almost 30 years. In 2009, the real estate firm iStar acquired a huge proportion of the city, thanks to developers defaulting on loans it had given, providing a rare chance to redevelop a city.

Now, 32 years, multiple urban plans and huge efforts to convince locals later, iStar’s vision for Asbury Park has been mapped out in eight redevelopment projects, and that number is rising. Starting with The Asbury, the town’s first hotel opening in 50 years, followed by the Monroe – a 34-unit condo designed by New Jersey-born, Miami-based architect Chad Oppenheim – and the tentatively named 1101 Ocean, an ocean-front mixed-use complex with an upmarket  50-room hotel on top, iStar’s plans promise to restore the city to its former glory, and more.

‘When I discovered this place, an hour and ten minutes away from New York, 35 acres  of empty land on the boardwalk, between historic buildings, it was like, this cannot be,’ says Anda Andrei, creative director and design lead of the overall Asbury Park project. ‘It’s a quirk that it exists. I felt like I was in the Wild West at the beginning of America, discovering it like, “This is my land!” It’s an opportunity that rarely comes and Jay [Sugarman, iStar CEO] realised it. It is a legacy project for him, and for me too.’

The silver-haired Romanian, who set up on her own in 2013 after a 29-year stint with Ian Schrager, finally as president of design, is focused on preserving the character of the place. For each project, she has enlisted different talents, such as Oppenheim, architect Gary Handel and interior designer Dominic Kozerski. ‘This had to be done in a unique, one-of-a-kind, caring way. Not just go in with bulldozers, build a lot of condos, sell them, make a buck and get out. Jay felt it was his legacy not to destroy the soul of this town, not to make it another developer special. Very few people do that. Almost nobody,’ she says.

With The Asbury – a stylish hotel designed by Stonehill & Taylor and Bonetti Kozerski with a rooftop bar, pool and rooftop lawn that hosts film screenings – open since May, Andrei is emboldened about the next phase. ‘Now the hotel is open, it offers greater credibility for who I can bring in. Inviting these creatives and sharing your vision, you really had to seduce people with words.  Now there’s more physicality to the concept.’

Andrei, who also directed Aby Rosen’s 11 Howard property in New York, says, ‘When I started this, I couldn’t stop connecting it with the year Ian got the Delano in South Beach and we went there and it was nothing. What the Delano did for the whole South Beach, I wish that it would happen here too. This is way above doing a hotel. It’s much more challenging and complex, with social and economic implications. In general, I find the boutique hotels got out of control and I actually dislike most of them. Going back to classic is right and a return to less design is right.’ 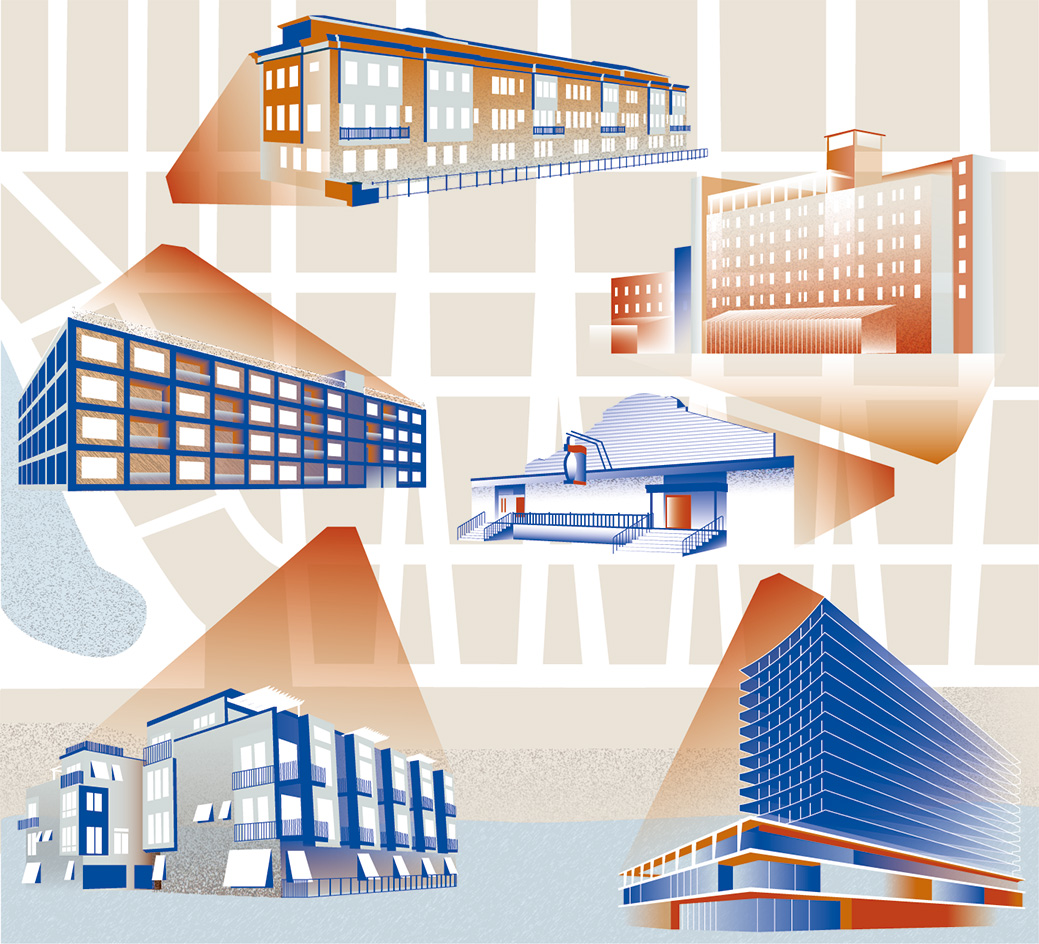 The development of Asbury Park (clockwise from bottom left)

Vive: Completed January 2014. With 28 townhouses, this is the first residential development on the city’s waterfront since 2007.

South Grand: Completed June 2015 . A complex of 28 four-storey townhouses, this is  the first development by a national homebuilder  in Asbury Park since 1984.

Asbury Lanes: Due to complete 2017.  This legendary music and bowling venue will be carefully updated by iStar.

1101 Ocean Residential and Hotel: Due to complete summer 2018.  A residential complex designed by Anda Andrei, together with architect Gary Handel, landscape architects Madison Cox and Bonetti Kozerski.  A 50-room boutique hotel sits on top. The complex has stood vacant for 20 years and is one of  the tallest buildings along the Jersey shore.

A tower on The Asbury hotel’s rooftop, which is used to project films onto the wall in the evenings