The central atrium at the heart of the Fondaco dei Tedeschi, with the escalator that pierces the building’s east side

All of Venice’s well-documented icons, its patinated, weather-battered palazzi, its Unesco-protected narrow streets, bridges and historical churches, appear to have been standing for eons. In a city so architecturally precious, where building regulations can be unsurprisingly strict, you’d be forgiven for thinking that all buildings date back centuries. Yet urban evolution is near inescapable, and one of the Grand Canal’s biggest landmarks, Fondaco dei Tedeschi, is a case in point.

First erected next to the Rialto Bridge in 1228, but destroyed by fire and reconstructed twice since, this palazzo was ‘rebuilt in its current form in 1506, turned into custom offices under Napoleon, and then subject to a series of radical architectural interventions in the 1930s to accommodate the city’s central post office under the Fascist regime’, explains Ippolito Pestellini Laparelli, OMA’s youngest director. The Dutch architecture firm was appointed to design a proposal for the building in 2009, the year after it was bought by the Benetton family holding company Edizione, which was exploring potential new uses. OMA suggested a department store. In 2014, Edizione leased the building to the duty-free giant DFS (owned by LVMH), and so the latest phase in the Fondaco’s life began.

‘All moments of its history are equally authentic for us, from the 16th-century palazzo to our intervention today,’ adds Pestellini, who led the project together with Rem Koolhaas and project architect Silvia Sandor (Pestellini’s previous work includes curating the 2014 Venice Biennale’s Monditalia section). This is not the first time OMA has tackled the problem of bridging old and new. The Garage Centre for Contemporary Art in Moscow and the Fondazione Prada in Milan – ‘where old and new meet dynamically’, Pestellini writes – are both acclaimed examples of preservation work uniting past and future. In that sense, the Fondaco dei Tedeschi was a perfect case study, combining in a single edifice more than five centuries of building. OMA was merely about to add its newest layer. 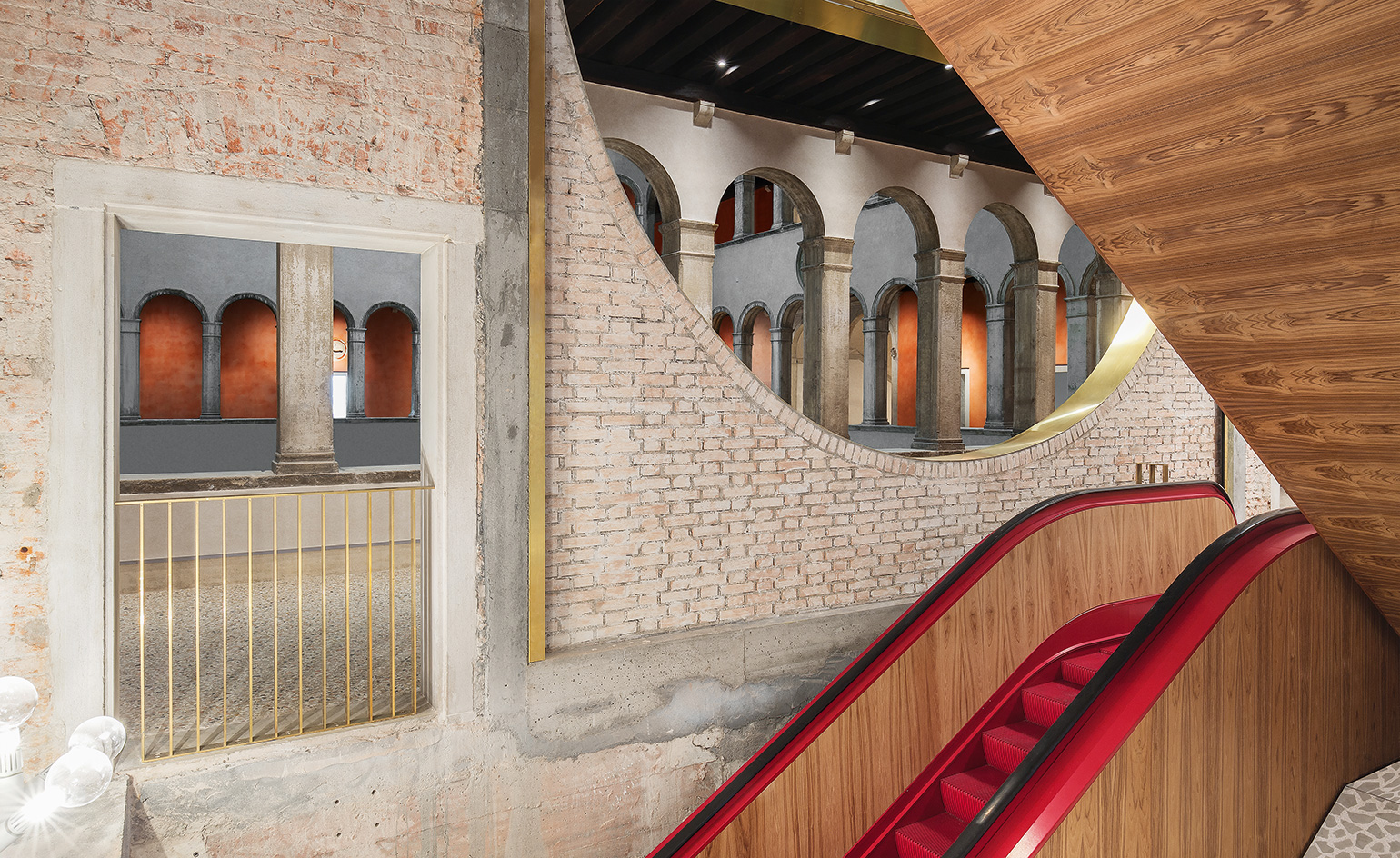 A view of the escalator

The current 9,000 sq m structure – almost entirely reconstructed using modern concrete technology under the Fascist regime – is also a listed monument, which made any significant change almost impossible. The architects had to conduct extensive negotiations with the relevant city authorities, national heritage institutions and local citizen groups to get the green light. Their proposal was simple; while embracing each era in the life of the structure, they would introduce some key elements that would bring it into the 21st century and adapt it to its new use, avoiding nostalgic reconstruction, and looking more to the future than to the past.

‘OMA’s scheme is based on a finite number of strategic interventions and vertical distribution devices – such as the escalator and lifts – that support the new programme and define a sequence of public spaces and paths,’ says Pestellini. ‘Each intervention is conceived as an excavation through the existing mass – coring the building – that liberates new perspectives and unveils the real substance of the Fondaco to its visitors, as an accumulation of authenticities.’

As a result of this ‘excavation’, a dramatic escalator, in bright red and brown wood veneer, now pierces the building’s east side. In OMA’s original plan it was hinged, hanging within the central courtyard; it would be lowered when the department store was open but could be tucked away above head height when the space was needed for events. ‘Venice’s planning authorities found this proposal obscene,’ recalls Pestellini, ‘so we had to adapt.’ Nearby, a large inverted arch is cut through the east atrium wall, enhancing connections by creating internal views across floors. Now you can take the escalator on the east side and – crowds allowing – catch glimpses of the canal. 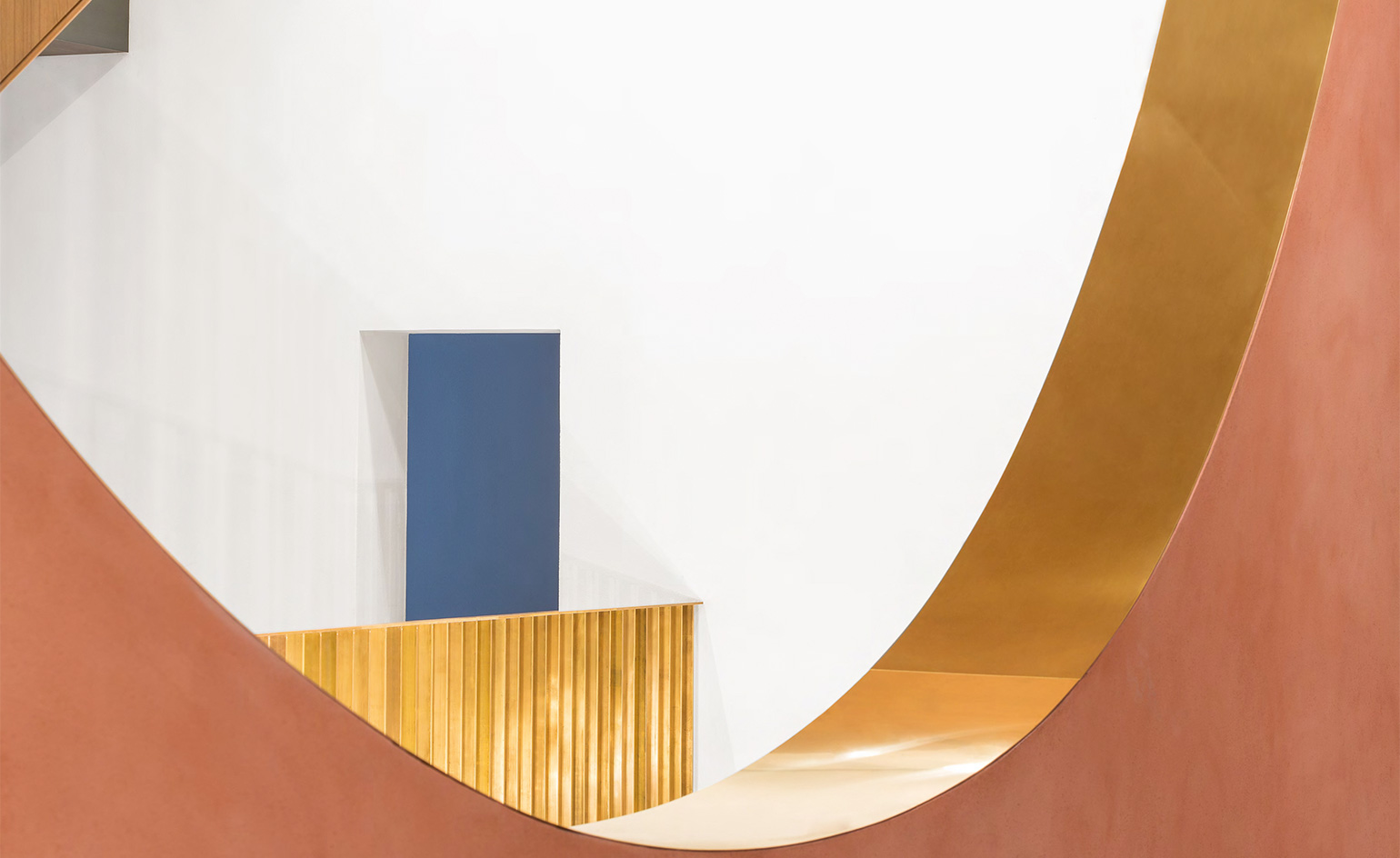 An inverted arch was cut into the east atrium wall

The central atrium at the Fondaco’s heart features a visually striking, brand new floor of red Verona and white Pietra d’Istria marble stripes. Indeed, colours and patterns abound in OMA’s scheme – there are plenty of golden and red details in walls, staircases and railings, terracotta walls, an oversized version of grey terrazzo flooring that extends up some of the walls, exposed brick and geometric black ironwork on gates.

There is also a new glass roof, held by steel structural beams. On it – hovering right above the central courtyard – sits the renovation of an existing 19th-century pavilion, which will be used for events. Beyond it, a large wooden terrace offers spectacular Venice vistas. Both areas will be accessible to all. Public access and an open nature were pivotal to OMA’s concept. ‘We did not want the Fondaco to turn into another building closed to the public. This is the typical condition that many hotels, private homes or even museums facing the Grand Canal offer in Venice, that are off limits for the common wanderer,’ says Pestellini. ‘There is a level of publicness that is implicit in the programme of an urban department store; but the project goes further than that. Both the central courtyard and the pavilion space on the rooftop will be immune to the commercial programmes, offering infinite extension to the building’s potential. The use of the courtyard is regulated by a convention with the city of Venice and can be claimed by the city and its local institutions for events open to the public.’ And while two new entry ways were made, from the Campo San Bartolomeo and the Rialto, existing entrances used by locals as shortcuts were preserved, allowing the courtyard to be accessible outside store opening hours. It will function as a covered square (or campo in Venetian), he adds.

The firm worked on the building renovation but not on individual retail interiors. So, to maintain the design’s overall integrity, OMA asked that the brands respect certain restrictions, such as not obstructing windows and views out. With that in mind, and since the building’s handover to the owners this summer, tenants have been feverishly working on their fit-outs, gearing up for the big launch that will mark the start of a new chapter in the Fondaco’s long history. The DFS Venice department store opens its doors this month. §

Looking up to the coffered roof of the public central atrium

Looking back into the atrium from the escalator