Since taking charge of the house in 2007, Gaia Repossi has delivered jewellery collections that not only prove globally influential, but also continue to evolve. This month, she offers a sleek continuation of the brand’s cult ’Antifer’ line – originally designed for the launch of Dover Street Market New York – with a capsule collection of rings for the store, titled ’Antifer En Chute’. ‘[DSM] love to challenge me,’ she says. ‘The Antifer Classic 1-Row ring was born for them, designed from their logo. This newly modified piece has a twist, giving it an elliptical illusion.’

Repossi takes an architectural approach to fine jewellery design, using the body as a structure with which to craft her pieces around. The effect is evident in her signature creations: diamond pavé cuffs that mirror the curvature of the hand and conjoined hoops that seem to hover above the ear’s helix. Refined yet disruptive, her aesthetic is poles apart from the classically flamboyant creations that populated the Italian family firm during the 1970s and 80s. 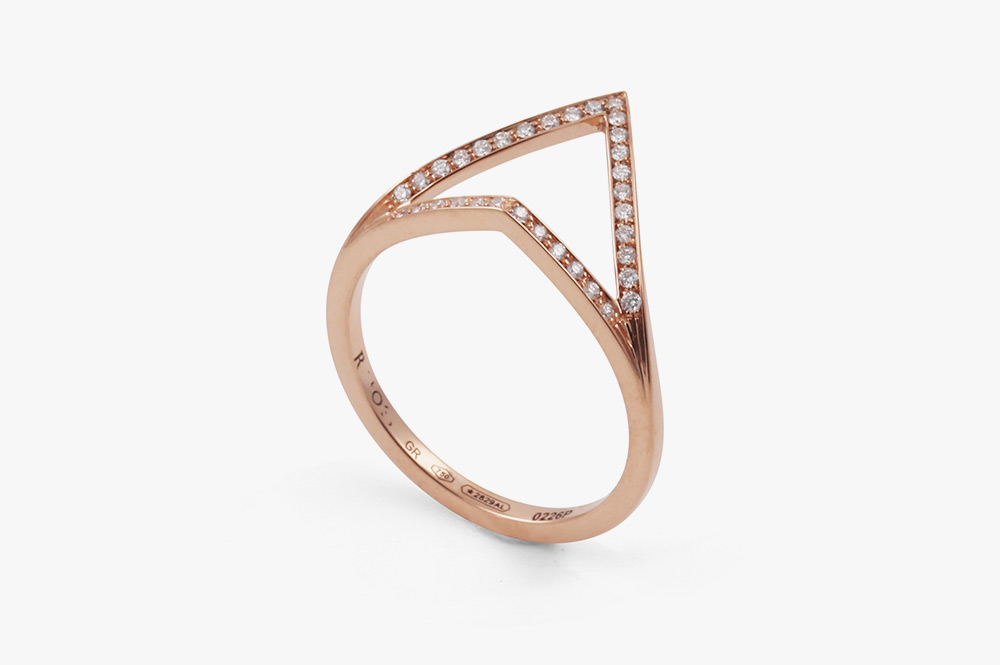 The distinctive Antifer design comes set in black, rose, copper or solid gold and is available plain or with a partial or full set of diamonds. The challenge, she notes, was to ‘create a ring with an optical twist in an easy yet fun way, but which can remain visually interesting once worn’. And she has succeeded, with a subtle but striking band that bends sharply on the phalanx of the finger, as if folded by gravity.

While Repossi counts Japanese minimalism as an overall influence, she insists that there are ‘no specific references’ behind the designs this time. Instead, she speaks of the impulse to ‘create a new style, like a drawing on the hand – a ring that simply follows the curve of the hand with a line’.