We were going to conjure up a snarky metaphor about the Jeep Grand Cherokee SRT being a perfect four-wheeled metaphor for the Republican presidential candidate, but the unexpected success of the latter derailed this train of thought. For this is very much an American truck of the old school, which attempts to garner its charm through brute force, unquenchable self-belief and a yearning for power. And as we’ve all seen, that approach is more than enough for most people.

Yet somehow the SRT seems at odds with its colossal 6.4 litre powertrain. American manufacturers have been building over-powered trucks and SUVs for decades (and giving them agreeably macho names in the process – the Dodge Ram, the Ford F-150 Raptor and so on). Arguably, however, it’s European manufacturers like Porsche and Land-Rover that have demonstrated how best to build high-speed SUVs with style and genuine ability.

This is a little unfair, because the Americans were arguably first to the table with the idea of an SUV, and it must be galling to see their Euro rivals take the basic form and function of these big cars and then civilise them to the point that they’re a match for any conventional car. As a result, the SUV market keeps growing and growing – nearly a quarter of cars sold in the UK are SUVs. 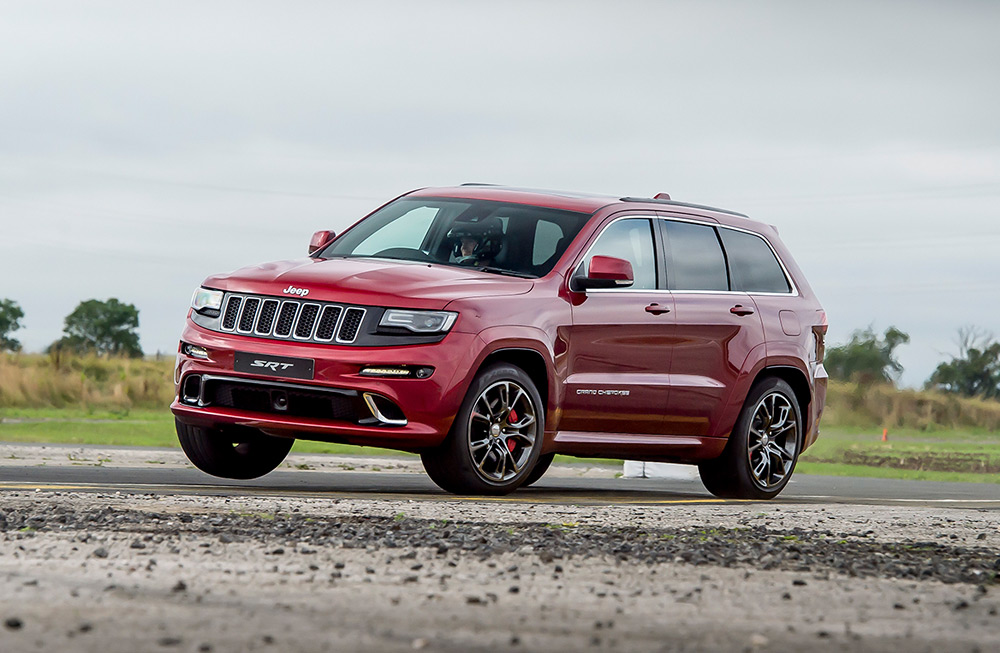 Turning these powerhouses of practicality into scorching sports cars is a dark art, requiring exceptional engineering prowess to counterbalance the inevitable contradiction between having a high-riding, heavy vehicle want to corner like a low, light sports car. Can the SRT cut in in this company? It’s no Cayenne or Range Rover Sport, certainly, and the relatively long experience of a company like Porsche easily outshines the big Jeep’s lofty and wafty seating position. There is a sport setting, for sure, but it firms up the suspension to uncomfortable levels of jiggle, while an even-harder-still ’track’ setting disengages the traction control – not a decision one takes lightly in a hefty, upright 475 bhp SUV. The loud, burbling exhaust note remains in line with most high-powered American cars, both old and new.

Like almost every decision in today’s car market, it all comes down to badge. Jeep can lay claim to a heritage even longer than Land-Rover’s, even if today’s company is now part of the Italian-American Fiat Chrysler empire. The SRT has a straightforward, handsome stance, without any of the modish tricks and gimmicky design ’Easter eggs’ that clutter up the lower-end of the Jeep range. It can’t quite match its rivals on quality and ergonomics, but a Range Rover Sport SVR or Cayenne Turbo S cost half as much again. You’ll be settling for a different kind of image, and Jeep’s alliance with Fiat gives the Grand Cherokee less of an overbearing edge. On this occasion, although the big, brash American isn’t necessarily the best candidate, it could still win the popular vote.

The SRT has a straightforward, handsome stance, without modish tricks and gimmicky design features

Inside, processing is kept to a minimum, allowing the leather’s natural beauty do the talking